To set the scene, let’s first talk about orientation. The orientation of images before the 1980s was a term seldom used outside the “print world.” Computers changed the definitions of many words, and they have, in the last four decades, become commonplace. Two such words are “portrait” and “landscape.”

In the postcard hobby there are synonyms for portrait and landscape. Postcard collectors refer to the images on their cards as horizontal or vertical. The orientation of a postcard image is frequently determined by “The Rule of Thirds.” This rule is not a fixed conceptional one, but one of aesthetics and how one’s eye appreciates the placement of an image. Visualize, if you will, a tic-tac-toe grid over a picture that you have a great fondness for. Then decide for yourself where the image draws your focus. There is a good chance that the focus point you select will be in any one of the nine squares, except the center.

The postcard collector who specializes in ocean liners, passenger ships, and/or freighters will surely notice that a very high percentage (between 92 to 96%) of their cards have horizontal (or landscape) images. There are some notable exceptions, i.e., the P. & O. Viceroy of India, P. & O. Mooltan, and the Red Star Line’s Pennland, Vaderland, Finland, and Lapland, but these are fairly rare and along with the French Line’s signature card, Paris, do not appear in most collections.

As shipping lines fell like dominos into using postcards as advertising and passenger favors, the one exception among the port-side artists who ignored the obvious was Charles E. Turner of Liverpool. The others, Sam J. M. Brown, J. S. Mann, Odin Rosenvinge, and Walter Thomas continued to paint using elements of horizontal design.

Turner served in the Royal Air Force during World War I and worked as a war artist during World War II. When he returned home after military service, in the early 1920s he contracted with Taylor, Garnett, Evans and Company to do a series of postcards based on the Cunard Fleet of ten ships – the Carmania, Mauretania, Aquitania, Berengaria, Scythia, Samaria, Laconia, Aurania, Carinthia, and Caronia. Turner presented each of the ten ships in vertical (portrait) form. Not necessarily unique, but certainly unusual. 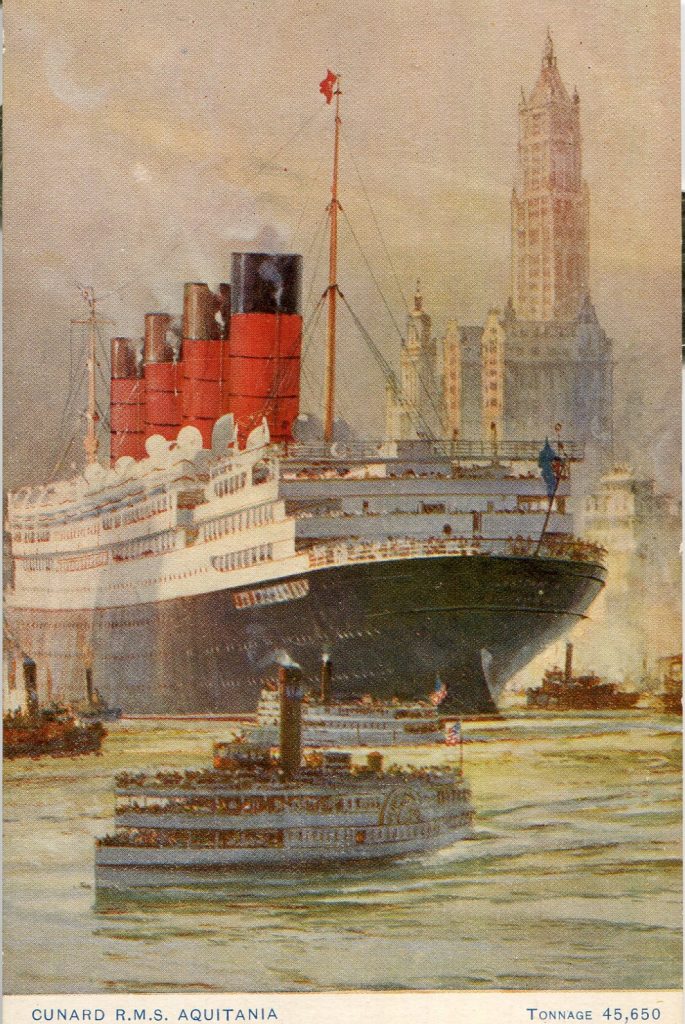 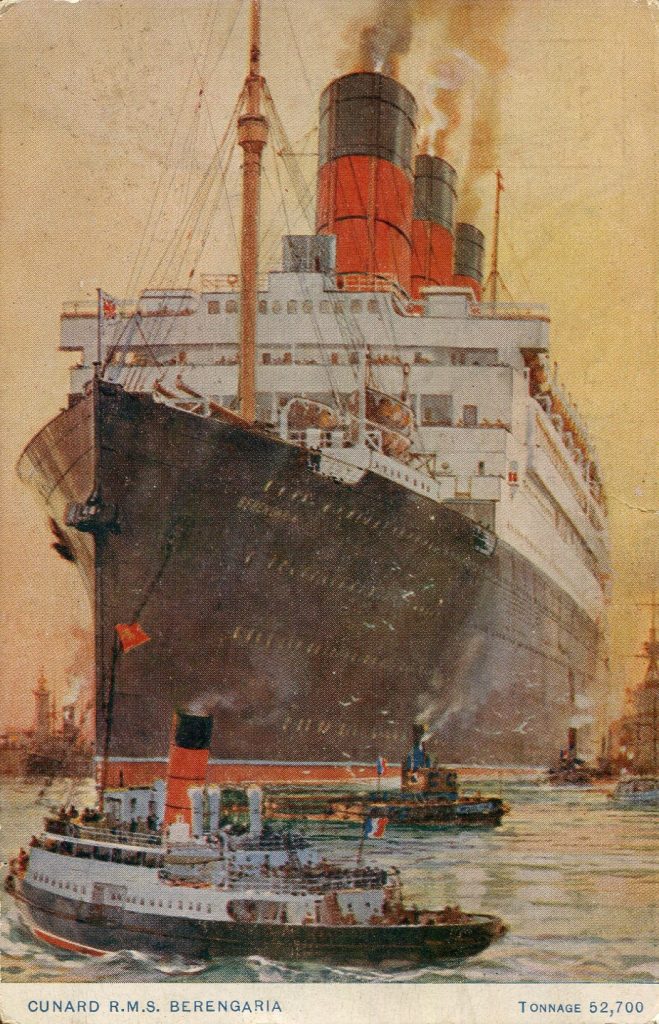 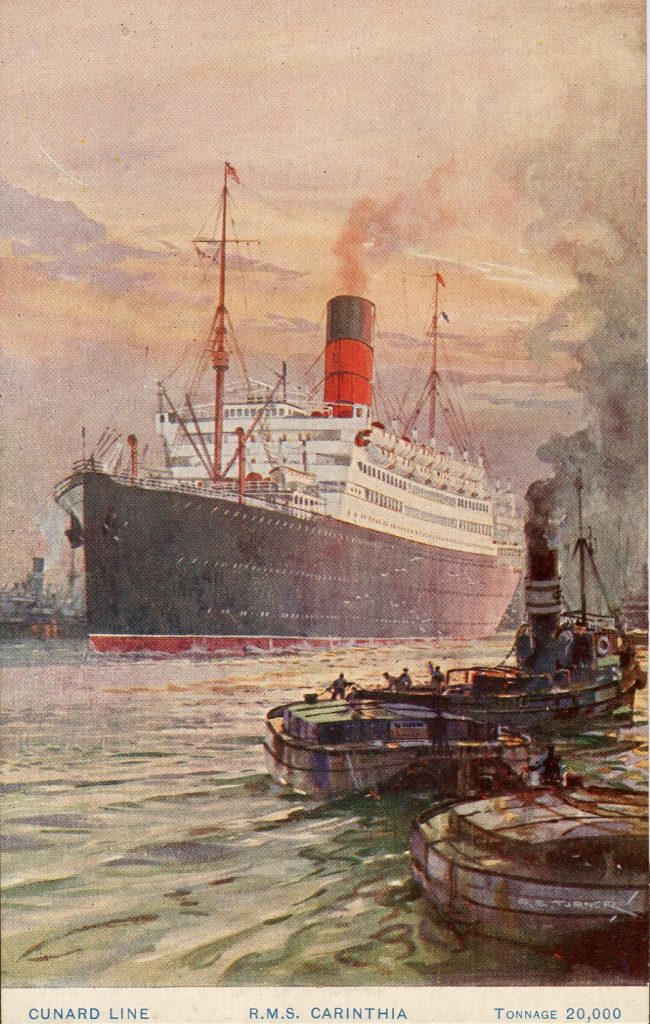 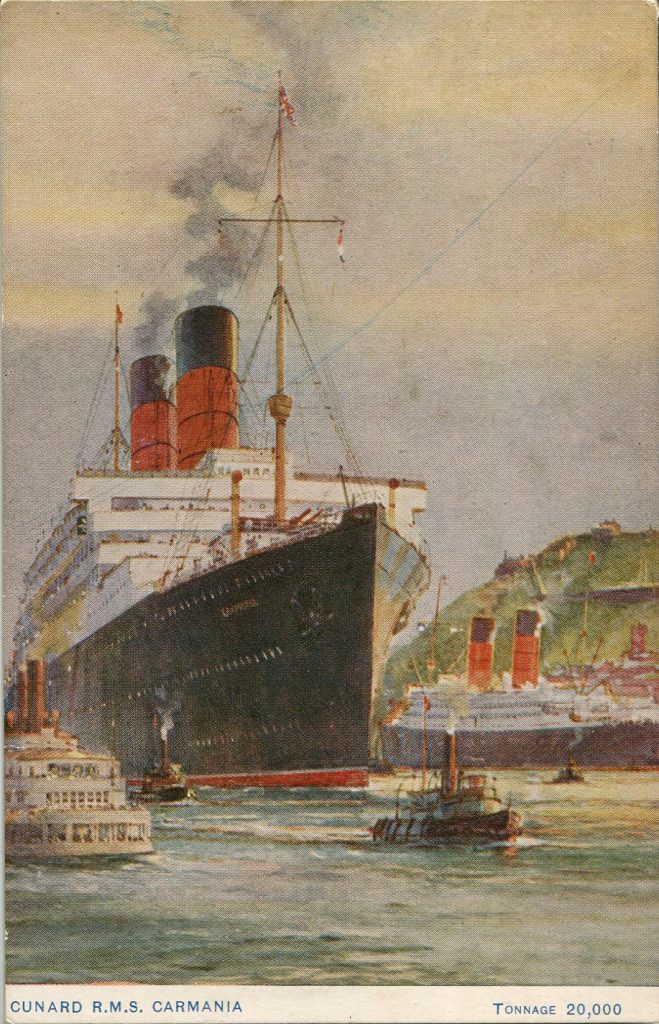 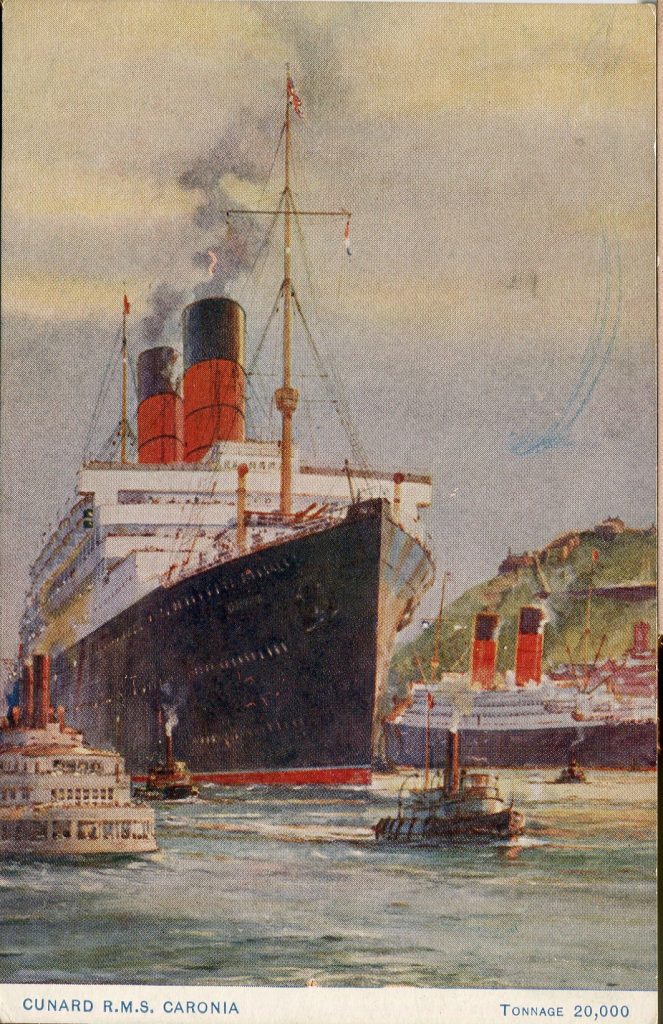 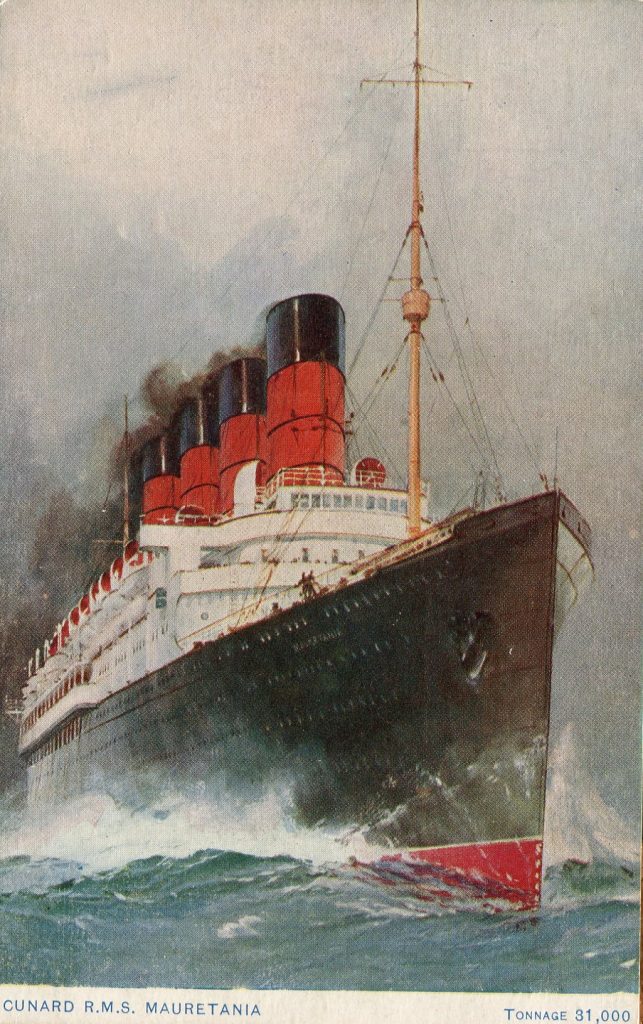 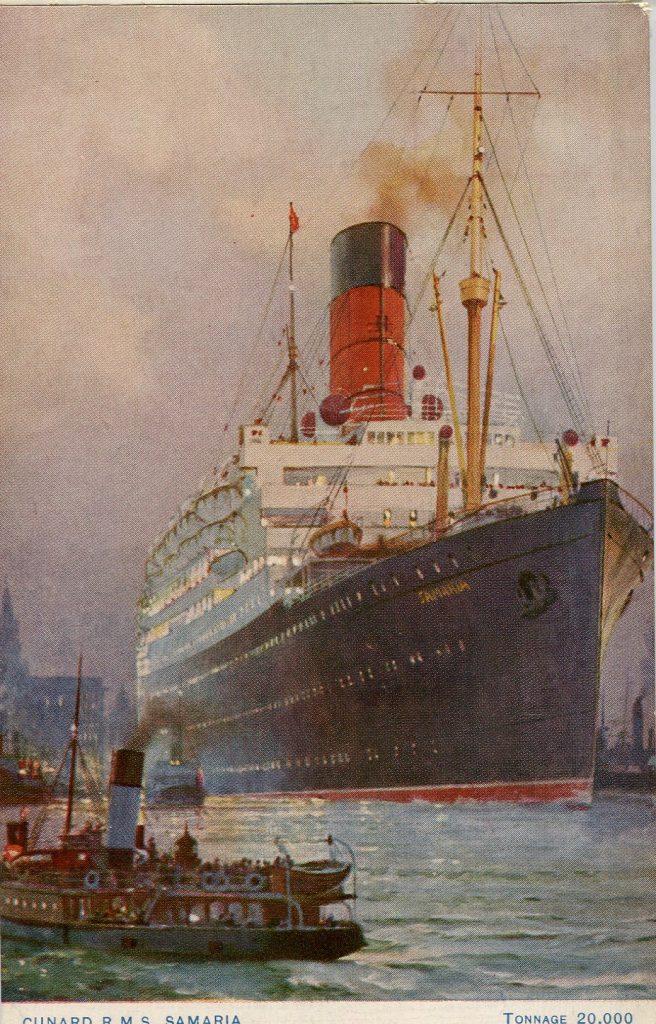 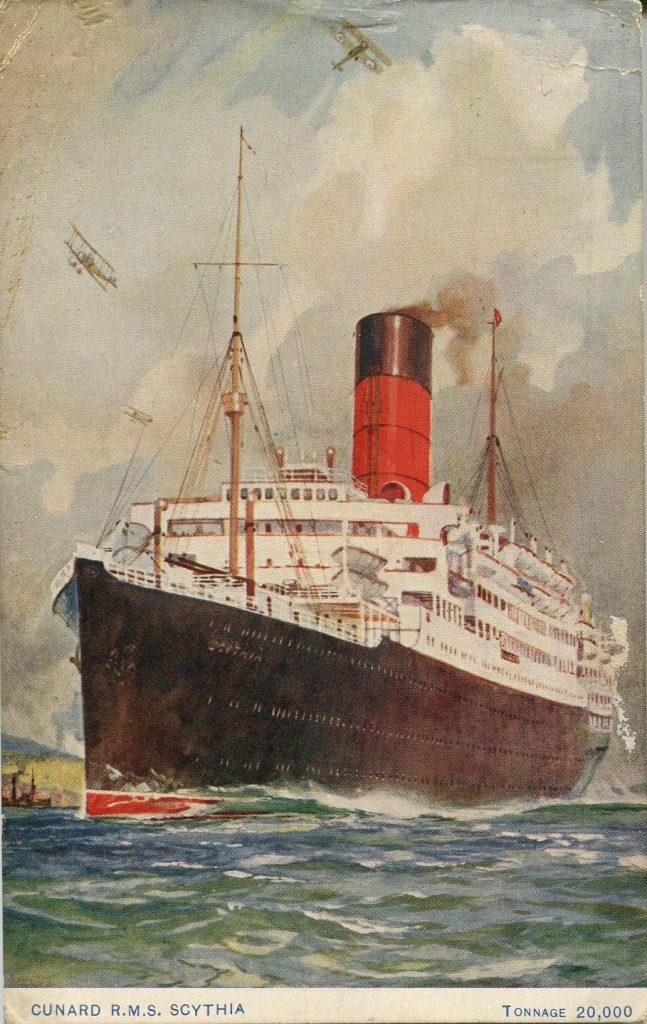 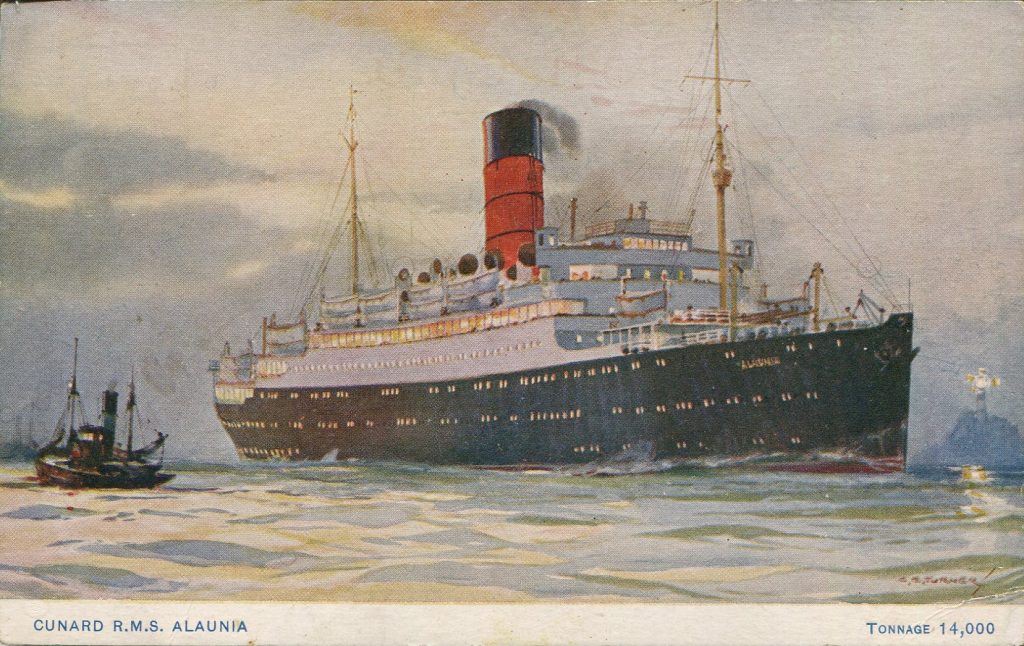 Turner added a horizontal card (above) to the set in 1925, and it has been suggested that there is a twelfth, but it is yet to be discovered, unless it is a second, unsigned rendering of RMS Berengaria in an at sea setting.

The Cunard ships of the 1920s were the settings of many outrageous antics of the Roaring Twenties. Events never dreamt of were planned for the sailing public. On-deck dancing was a favorite, especially in the late afternoons and at sunset. Open bars and fencing lessons were popular. Mixed-doubles shuffleboard became everyone’s new favorite sport. And when on-deck dining was offered with walk-up cocktail bars, virtually everyone abandoned the dining rooms.

Cunard offer the first “around-the-world” tour aboard the Laconia in November 1922. It left New York and took 130 days to complete a circumnavigation with 450 passengers.

Turner’s cards were on board that global hijinks and nearly every other Cunard scheduled voyage of the ships in the set (all enjoying the RMS – Royal Mail Ship – designation), for the rest of the decade.

The Staff of Postcard History offers this article for your enjoyment. It is a combined effort of many: our publisher, editor, webmaster and collectors/contributors far and wide. Please use the COMMENTS feature below to let us know how we're doing.
PrevPreviousThe Sound of Breaking Glass
NextToby, the East African WarthogNext
5 Comments
Oldest
Newest Most Voted
Inline Feedbacks
View all comments
Sally Swift

I love these cards.

I wondered why the Carpathia (known for rescuing survivors of the Titanic disaster) was not included, but I see it was sunk during the last days of World War I in 1918, a few years before this set was released.

Interesting to me particularly since relatives may have come aboard a Cunard from England to NY. Will have to search to see if it could have been one of these.

Another delight! Grateful to have somehow stumbled upon this magazine. Issue after issue brings to life our world in the same way postcards themselves do. Articles are personal, and brief yet filled with the love and caring of the sender (author). Wish I had some close friends that shared my feelings about it but it seems postcards, like so many things I love, are becoming an anachronism.

Excellent feature on these superb depictions… but a correction: R.M.S. Scythia was in service until 1957… not “2005”. She lasted a long time… not forever!