One of the most unusual meetings in the history of time was a conference held in Washington, D.C., beginning on October 1st, 1884. Invited by U.S. President Chester A. Arthur, 41 delegates from 25 nations met in the Diplomatic Hall at the Department of State, to attend what was being dubbed the International Meridian Conference.

The reason for the conference was to establish the Prime Meridian.

(The Prime Meridian, the straight line in the center of the map, is the line of longitude passing through the Royal Greenwich Observatory, in Greenwich, England; it is the meridian at which longitude is zero degrees (0o) and is often called the Greenwich Meridian.) 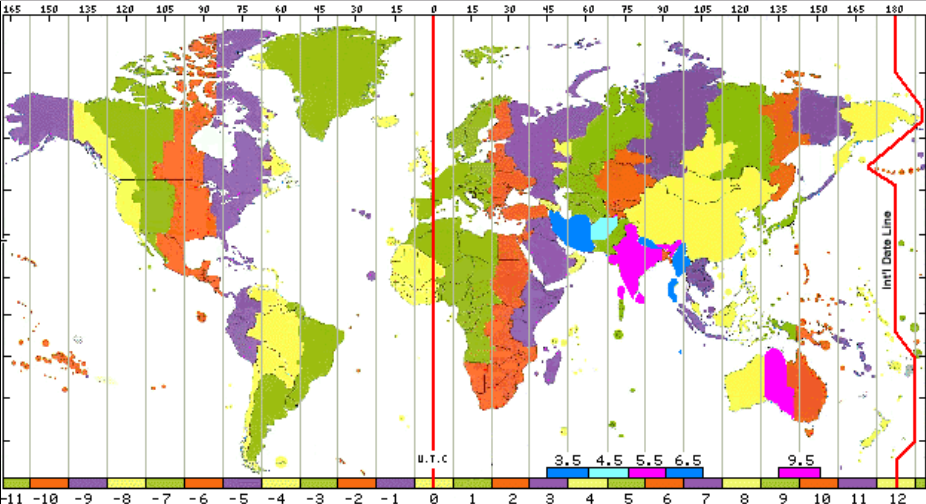 The need for such a meridian was simple: international commerce had grown to the extent that it was imperative to have all clocks set to a world standard.  With a world standard time system a more efficient transfer of cargo at international ports could be developed and an equally efficient system for the transfer of funds to pay for trade products could be achieved by world banking interests.

At the conference the following principles were established:

The Resolution fixing the meridian at Greenwich was passed 22-1 (San Domingo, now Dominican Republic, voted against); France and Brazil abstained.  The French did not adopt the Greenwich meridian on their maps until 1911.

The International Date Line (the jagged red line down the right side of the map) is the 180° meridian, and is on the opposite side of the world from the Prime Meridian.  The date line bends around some national borders for convenience sake.

The meridian through Greenwich was selected as the Prime Meridian because over two-thirds of all ships already used it as zero longitude.  Other reference meridians used before 1884 included ones in the Canary Islands, Rome, Copenhagen, Jerusalem, Saint Petersburg, Pisa, Paris, Oslo, and Philadelphia.

The conference’s accomplishments are present in every day of our lives, and although I know of no postcard about the conference, there are map postcards of every variety and postcards that show time zones (like the one above), clocks, timepieces and watches – all of which would be useless without the Prime Meridian.

Santo Domingo’s reason was probably because of the GADEJO state policy established since the foundation of our country and still persists to this day.