Recently a collection of eight Reutlinger (the well-known publisher in Paris) postcards came to my attention.  I have seen bookmark size cards often, but these interested me because seven of the eight appear to be addressed by the same hand to Mademoiselles at addresses in the Cher Department, a French “region,” in West-Central France that shares its name with the Cher River.  The size of these cards (1 11/16” x 5½”) is exactly half the width of a standard card of the era.  Each card is printed in a monochrome format but two have had color added by hand.  The photographs are of famous women of the time, i.e., Caroline Otera, Nina D’Arcy, Mlle. Degaby, and others. 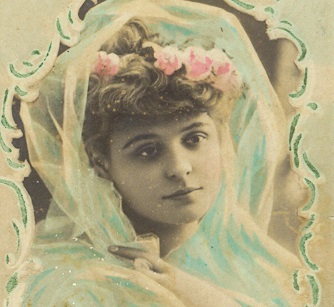 Of special interest is the fact that only two are signed, one by Mary and one by Renee, even though the writing is identical.

The odd card is addressed to M. Henry Doulain and is postmarked December 31, 1904.  The card is apparently part of a “month” set.  The image on the card represents April.

Mademoiselle Noemie Garange is the recipient of the card dated September 22, 1904.  It pictures Lucienne Breval, a Swiss opera singer that the New York Times once referred to as a “peculiar person [who] has delighted some patrons of the house while she has bitterly disappointed others.”

The card featuring Liane de Pougy who was a Folies Bergère dancer and renowned as one of Paris’s most beautiful and notorious courtesans, was postmarked October 22, 1905, and mailed to Mademoiselle A. Renault in St. Amand Montrond.

Caroline Otero is the featured celebrity on the card dated June 19, 1905.  (See Postcard History’s In a Few Words section, October 27, 2019.)  This card was sent to Mademoiselle Olive Renault at the same address as the card dated October 22, 1905.

The card postmarked 7th of May 1904 was sent to Mademoiselle A. Duboys in Limoges.  The picture is of Cecile Sorel, who in 1922 came to the USA to receive a “cluster of chrysanthemums with oak leaves” at the French Institute of the United States.  When Mlle. Sorel died at age 93, on September 3, 1966, she had spent over 80 years as an actress in the Comedie Francaise.

Mlle. Antonia Duboys also received the card postmarked October 10, 1904.  The lady on the card is identified as DeGaby or perhaps Degaby.  The only Internet reference to a person with that name is found on the 1896 Black Sheep Index of the London Newspaper Morgue.  (This list contains over 200,000 entries of people whose names have appeared as villains, victims, and virtuous people in magazines, tabloids and newspapers.)  It seems that DeGaby had a special notoriety for her representations of mythological and romantic statuary was living in the attic of a London theater.  Don’t you agree that this is a strange reason to be newsworthy?

Mademoiselle Berthe David was the recipient of both the August 1904 and the January 1905 cards – interestingly, at two different addresses.  In Rochefort, Mlle. David received the card with the picture of Nina D’Asty.  D’Asty was a dancer and actress with several European companies.

The last of the group was received by Mlle. David at the Institute of Mortagne (perhaps a school address?).  The picture is of a favorite of the Reutlinger photographers – Blanche Toutain.  Aside from her work in Parisian theaters and as a model for the Jeanne Le Monnier Costume Gallery of Paris, Toutain was among the first of many French actresses to make her way to the “silver screen.”  In 1917 Mlle. Toutain made her film debut in L’unique aventure de Maître Petit-Pethon.

Hi, again here I have a few postcards like these in my collection.