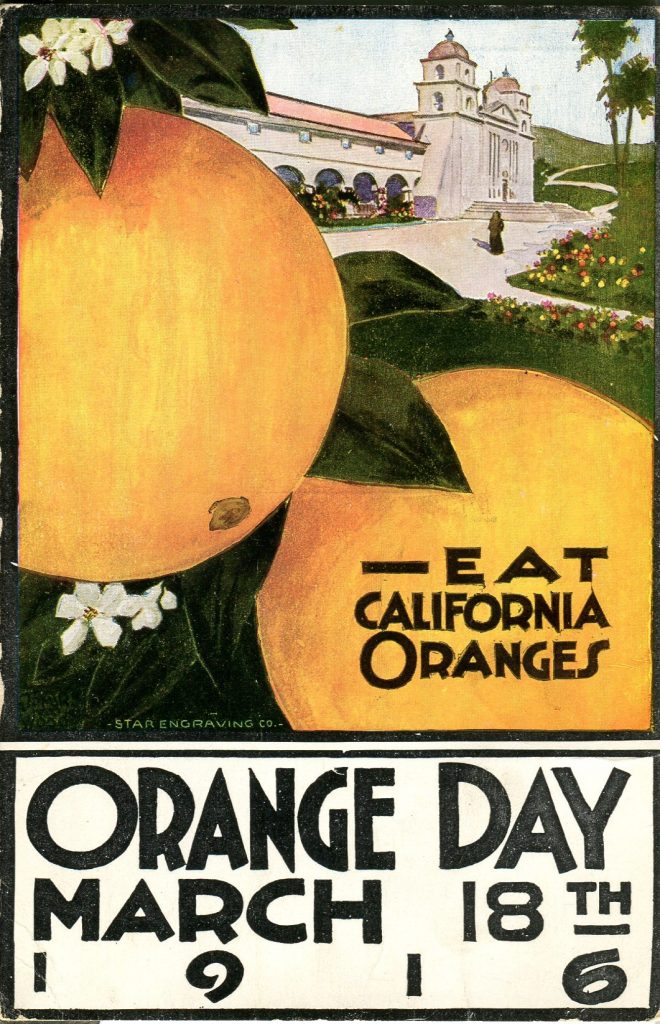 This poster postcard was created especially for the third of California’s Orange Days – March 18, 1916.

It shows bright and attractive images that are based primarily on one of the missions along the Mission Trail that today is nearly overwhelmed by Interstate 5 and California Rt. 1.

This card is one of many devoted to the Orange Day Festivals that have celebrated the work of fruit growers across the state. The festival continues into the present.

Below you will find a transcript of a newspaper article that describes the planning and work done by those who arranged for the previous year’s event.

March 20 will be 1915’s Orange Day. After hailing the orange as California’s greatest product and the beat representative of the state’s golden climate at an enthusiastic meeting in the Realty Board rooms yesterday, cores of Southern California’s fruit, railroad, chamber of commerce and business leaders today formally opened the campaign to make the second annual orange day known and observed in every town and city of America. The success of the first Orange Day, March 21. 1914, was recalled at the meeting, and a prophecy made that the 1915 day would far surpass that of the year before in benefits to the fruit growers, in advertising the state and in stimulating the nationwide consumption of oranges.

To name committee: Willis H. Booth, who presided was empowered to name a permanent committee of fifteen to take charge of the organization and all details of Orange day. The San Francisco exposition authorities have set aside March 22 to extol the orange. It was decided by the Southern California leaders, however, to ask that March 20 be made the day, since, the twentieth falls on Saturday, considered to be the best retail day of the week. The San Diego fair has also named a day. Resolutions introduced by Herbert L. Cornish were unanimously adopted, asking that Governor Johnson be requested to issue a proclamation fixing March 20 as California Orange day throughout the state and that all county and city governments, all chambers of commerce and boards of trade and other agencies be asked to co-operate.

Speeches were made by many of the representatives present, including Mayor H. H. Rose, who called the meeting to order; others included G. Harold Powell, general manager of the California Fruit Growers’ exchange; C. C. Chapman of Fullerton, largest individual shipper in the stale; M. J. Bunsen, general manager of the, Los Angeles Examiner, and H. S. Kneedle, secretary of the San Bernardino chamber of commerce.

Co-operation in the Orange day campaign was promised by the following well known and representatives men: Herbert J. Evans, President of the Monrovia board of trade; K. E. Greenleaf of Covina, C. H. Sherwood, secretary of Covina Board of trade: I. E. Curtis, III of the San Bernardino Orange Show, Fred Borult of San Fernando; W. E. Bush, newly elected president of the Merchants and Manufacturers’ Association; and others.