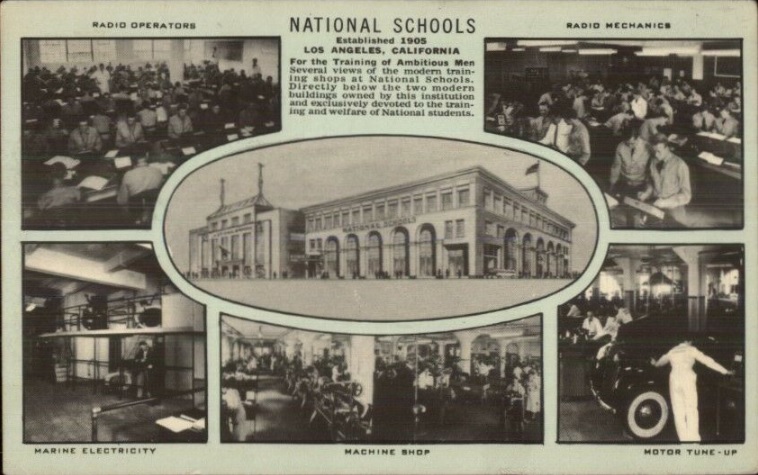 In 1903, Vrena Bender Rosenkrantz saw her first automobile. It had just been purchased by a wealthy Los Angeles businessman. Back then, automobiles were very uncommon and regarded with suspicion. Like many others Mrs. Rosenkrantz’s first impression was that it was a toy for the idle rich, but her second thought was that someday there would be a need for people to repair the automobiles that would soon foul the air and clog the streets of her beloved Los Angeles.

Joseph and Vrena Rosenkrantz, through inheritance, were themselves wealthy, even by California standards, and they were both people of action. In less than two years Vrena had gathered the funding and found the facilities to support a faculty, a curriculum, and an educational development plan for what would become America’s first technical school.

The first class in automobile mechanics had three students. An instructor hired by Mrs. Rosenkrantz herself taught it in 1905; each student paid $25 tuition.

Over the next few years, the number of automobiles grew dramatically, and more and more students came to the school to learn automobile repair. As Vrena added programs and staff, classroom space became a constant problem. The school moved at least three times within downtown Los Angeles, and finally in 1920 as Joseph assumed management, they purchased land on the southeast corner of Figueroa and Santa Barbara Avenue. Meyer and Holler (a well-established southern California construction company) was commissioned to build the new school. As a firm famous for other California buildings, including the Grauman’s Chinese and Egyptian Theaters, they followed their mandate well; the school was larger than had ever been seen in Los Angeles.

The new building opened in April 1923 and became an instant landmark. At the time it was the largest building west of Kansas City. The façade of the three-story structure had gracefully curved arches that soon engendered the LA legend of “meet me under the arches.” The building’s street frontage was rented to commercial shops and restaurants.

For the students, there were classrooms, laboratories, workshops, dormitories, a library and gymnasium. It also had a public garage, where customers could have their cars repaired by students at greatly reduced prices, but with full guarantees. Over 200 students could receive instruction at the same time. It was then that it became the largest trade school in the U.S.

The school advertised heavily in technical magazines such as Popular Mechanics and Popular Science. They also used newspapers and did several general mailings, mostly on postcards – like the one you see here.

There were also plans for a new campus along Exposition Boulevard between La Brea and Crenshaw. However, school officials decided to expand the Figueroa and Santa Barbara campus instead.

As technology advanced, new schools were added, including programs in aviation, radio repair, and radio broadcasting.  In the mid-1930s when Diesel engines became practical, the school had to expand again to accommodate another in-flux of students.

During World War II, the school trained hundreds of soldiers as radio technicians, electricians, and automotive mechanics. The school grew so large and so fast that in late 1942, the school and its officials were indicted in Federal court for trying to defraud the government, but  after a three-day trial, the officials were acquitted of the charges because no act of wrongdoing was discovered.

After the war ended, enrollment swelled even more as returning soldiers used their G.I. benefits to pay for education. As the post-war economy regained a confident consumer focus, there was more demand for automobiles—and people to repair them. Television was another growing post-war industry, and the school programs in television repair. Classes in home appliance repair and heating and air conditioning were also implemented.

In late 1959, the name “National Schools” changed to “National Technical Schools (NTS).” Ownership and control of the institution passed to the employees, and through the next three decades, NTS became increasingly dependent, on government funding. Soldiers returning from Korea and Vietnam brought in more G.I. bill money; other students used federal and/or state financial aid to pay their tuition. The high-tech 1980s brought new courses in computer programming and repair and even robotics.

An Encino-based company, United Education and Software (UES) bought NTS in late 1985. UES already operated twelve other trade schools in California under the name “Pacific Coast College.” Initially UES, which had been struggling, got a financial boost from its acquisition of NTS, but unfortunately, things did not go well for either NTS or UES.  UES declared bankruptcy in 1989 and closed every campus.

The ornate, Italian-styled building remained until it was demolished in 1998. Today, a Chevron station and a McDonald’s restaurant occupy the site.

The postcard above was mailed in 1942 by Pvt. John Lucari. John’s message, addressed to Bette, was so praise-worthy of his experience at the school that I decided to do some research. John enlisted in the U.S. Army Air Force in 1942. He served four years as a combustion engine mechanic, most likely using the skills he was taught at the National School. Peter Lucari, Jr., John’s younger brother, told me how John liked to brag about his willingness to “stay put.” He claimed that after he got home from his service in February 1946, he never left home again. He lived in the same house his entire life. John died in 2003 at age 86.

Being a native of Los Angeles I was familiar with the locations but had no idea of the history that was involved. Thank you!

I’m a Filipino from the Philippines,a proud product of National Technical School during the late 1970’s
“Patience Is Essential To Success” as a virtue/motto of Rosenkrantz.

Glad to hear of you, I also graduated from that school around that time. But I lost my diploma and have no idea how to find another one since that school was closed so long time ago.

I am from Malaysia. Sad to know that the NTS building is no longer around and today reduced to a chevron station and a McD outlet. Studied electronics here until sometime in the early 80’s. Another proud product of NTS.

This is an interesting piece of history. I have in my possession a compilation of manuals from this institution ,20 in total. They are in very good condition, all together in a burgundy cover,with the student name engraved on the front. I have not seen another like it and would like to know if there is any interest. I found it in my late husband’s treasure trove and do not know how he came to own it.

Sounds interesting, I am Fernando Avella of BELIZE , I graduated from that school sometime 1972 ? . But I los my diploma to hurricanes . Do you think that someway I can find another diploma?

In the compilation of manuals, do you see the name FERNANDO AVELLA engraved on it?

Hello, I am from Ecuador and my grandfather obtained his degree in correspondence studies in radio, television and electronics… i am proud

I been there in 1981, was amazed because a big building also lot of students, and offices. Teacher very kind, show me the Tv/radio courses

Where you from? Did you graduate from NTS?

I have a photo of JA and Verna as well as a booklet from the Hollywood ladies auxiliary honoring Verna. Any idea if they have descendants who would be interested in having these pictures?

Beautiful history. I am not American, I am a Belizean of Central America, at around 1972 I graduated from a National Technical School,(4000 South Figueroa Sreet?) Los Angeles CA. At that time the School`s president was L.J Rosenkranz . It was a course by correspondence, by airmail or even by surface mail, but I did graduate. My problem is that 2 times I lost my diploma to the hurricanes that hit Belize. Can someone please help me find my diploma one more time?

Hi Fernando, so much fond of your experience with nts.
LJ was a brilliant gentleman and I am thankful for his expertise as I left Guyana for the UK and b0ecame a TV engineer then later joined Honeywell on hvac.
Glad to hear from you

Hi, glad to hear from a NTS student, can you remember who signed your diploma apart from the president L.J. Rosenkrantz?

Hi Fernando,well I got my Diploma on Radio, TV and Electronics iñ march 1962, couldn’t go to LA so I left for England in May of that year.I don’t remember who signed my Diploma but I think LJ’s name was on it.I do remember his signature as he had a special way that he did it.However, I still have in my possession the little introduction card given on joining NTS as a student.I became later, a TV service engineer and later joined Honeywell Controls syst. as a tech rep.Ever so grateful to LJ for his good works…joe

Wonderful nostalgia so real I could almost smell donuts and hamburgers frying. An American success story from a well known family with lots of (Rosecrans) streets named in their honor. I loved the ending that describes one man’s experiences after he trained at National and verified all the details by interviewing his brother. The moral of John’s life as told by his brother Peter was that one man’s education, willingness and gratitude led to a life long contentment. Thank you!

to know that the NTS building no longer exists makes me feel sad I am from Honduras and I graduated from electronics in February 1985 here I used my technical knowledge learned at NTS and used to work by Lucent Technologies. i wil never forget the time during I was studying at NTS and hope one day find any of my classmates

I was a student on Radio, TV and Electronics from 1959 to 1962 and achieved a Diploma. Was offered a six months in the Lab but could not get a visa to attend Santa Barbara for lack of support.
Like to hear from anyone from those times

I am Fernando Avella of BELIZE, at around 1970? I studied by postal service from this school. I made my diploma on Automotive Mechanics and Diesel Master Course, sometime in 1972-1973?. It was fun to study from a school so far, but I had time then and in about 3 years I earned my diploma. I lost my diploma to hurricanes but I remember that it was signed by the school president : L.J. Rosenkrantz, others also signed my diploma but I don`t remember them. Hi to all the Rosenkrantz.

I still remember with great appreciation and nostalgia my course by correspondence of electronics and TV repair back in the seventies. What a good quality of education and the kits that came in course helped me a good deal in further studies in engineering. No matter the building was demolished what matters is the thousands of young people this school helped to improve their lives. 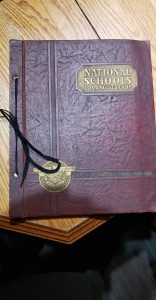 Had the opportunity to study English in NTS thanks to my decision to do it I pass the exam in Pasadena City College and was accepted as a student, for long time I kept my lesson in records to sad that I got rid of them.
Thank you

Can someone kindly help me to find another diploma, my diploma was lost due to hurricanes. I attended( around 1970? 1972) by postal mail service; The National Technical Schools of Los Angeles Ca.

Hi! My name is Jorge Vargas. I am writing a book about my dad. His name is Vicente Vargas. at an airport in David, Chiriqui, where we lived. My dad decided to take the diesel engine mechanic correspondence course and obtained his diploma in 1961. Later, the Panamanian Air Force was founded in Panama and he was chosen to be a helicopter mechanic. In 1969 he took 17 courses in the USAF and graduated as a maintenance supervisor for T-53 engines on the UH-1B helicopter. All thanks to that course he received at the National Schools. My father was very… Read more »