Between the years 1912 and 1926 my maternal grandfather Dr. E. Kyle Simpson served as a medical missionary with the Canadian Methodist Church in the Province of Sichuan in Western China.  After 1921 he was in charge of the Gospel hospital at the mission station in Fowchow, now called Fuling. Fuling is a small city on the banks of the mighty Yangtze River, located about 990 miles west of Shanghai.

One of the frustrating challenges faced by mission doctors in Sichuan was getting sufficient medical supplies.  Until about 1930 when commercial aviation started in China, the only way to transport medical supplies to Western China from cities like Shanghai was by small sail-powered houseboats, pulled upriver by workers known as trackers or by small steamships.  Sometimes such supplies were lost in river wrecks, and bandits and periodic civil war were additional dangers.

Fortunately for my grandfather the large city of Chungking (now called Chongqing), was only 53 miles away to the west, and medical supplies could be obtained there from the American-Chinese Drug Company.  This company and its retail store were set up about 1915 by James McCartney, a medical doctor with the American Methodist Episcopal Mission (“MEM”), when he left that mission body after an internal dispute.  It appears that this store succeeded Chungking’s American Dispensary retail store that sold foreign medicines and sundries such as soap and postcards, which McCartney had set up in 1899 as part of the Chongqing hospital of the MEM.

This introduction gives you a brief background for the postcards published by the American Dispensary and the American-Chinese Drug Company which have been passed down to me by my grandparents and parents.  I have a fondness for them because they provide a respectful and unvarnished look at conditions in China in the early 20th century, then a mostly rural country whose people usually earned their living by manual labor. 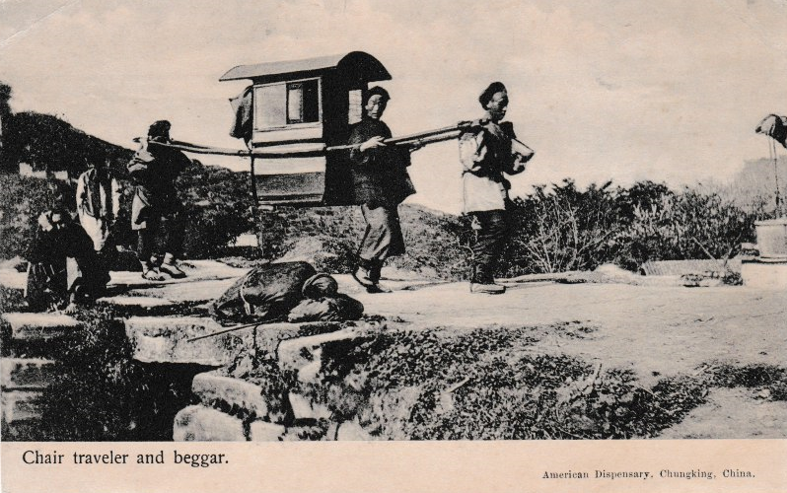 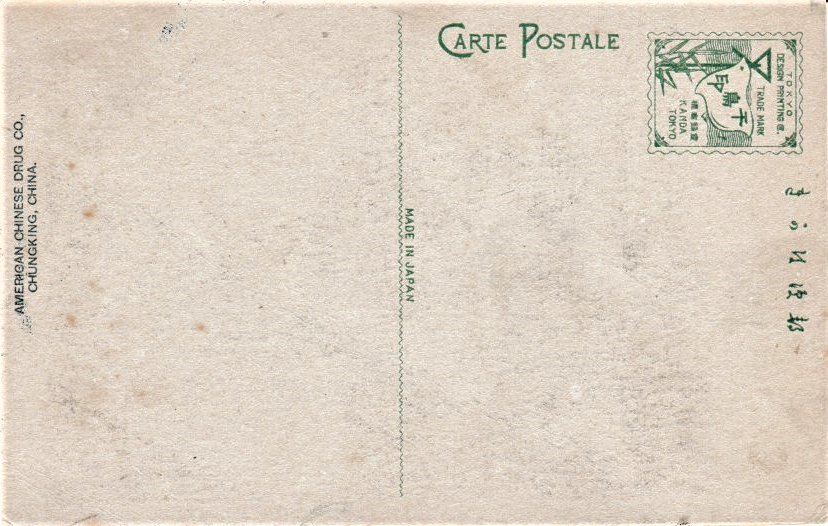 My grandfather and his wife Alice Estabrook Simpson travelled in such sedan chairs (American Dispensary).  The printer of my American Dispensary cards is not known, but I suspect they were printed in England. More American Dispensary postcards can be found in the online International Mission Photography Archives at the University of Southern California. 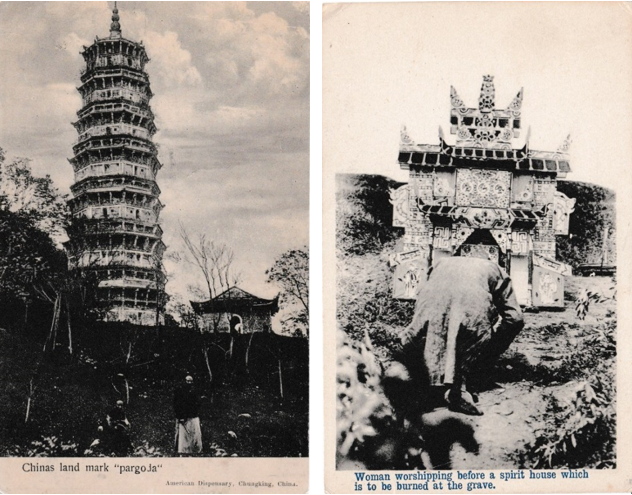 Pagodas (left) were a common landmark in China (American Dispensary).

I like the inherent humility of this image (right), plus the good quality printing of this postcard.  This card and all my other American-Chinese Drug Co. postcards appear to have been printed in Japan by the Tokyo Design Manufacturing Co., whose trademark was “Kanda Tokyo.” 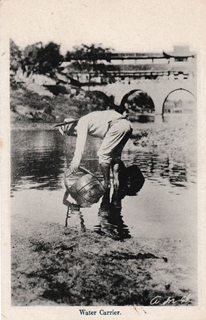 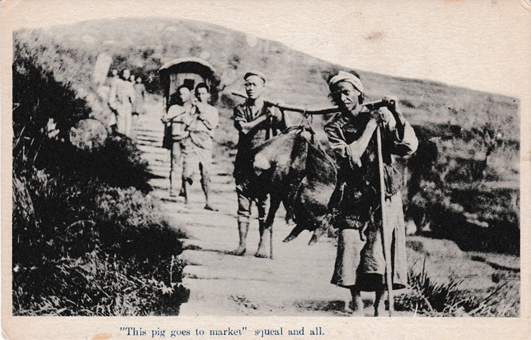 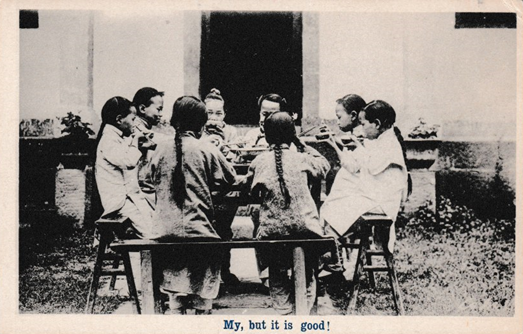 Not surprisingly this group of girls are enjoying their meal and each other’s company (American-Chinese Drug Co.).  Feasts remain important social events in China today. 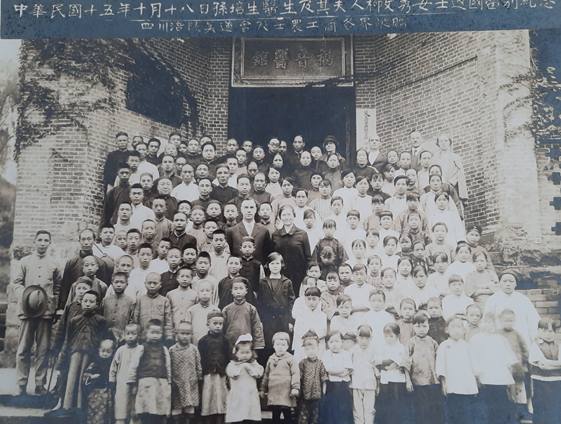 My grandparents (fifth row center in this photo) never returned to Fuling after this October 1926 farewell photo. But my grandparents always remembered China with fondness through the friends they made and by photos and postcards as these. 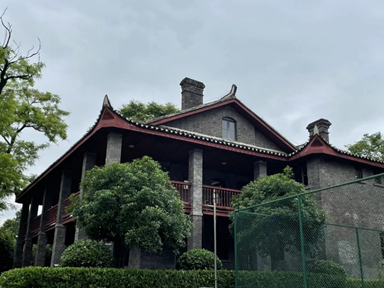 A Postscript: After the Chinese Revolution of 1949, the Fowchow Gospel Hospital was, as were others, changed to a People’s Hospital run by the government.  This building from the Fowchow Canadian Methodist mission station still survives, a marker of a long-ago time.

Kyle Jolliffe lives in Toronto, Ontario. For more than twenty years he has been an avid collector of New York City postcards from the pioneer era to the 1970s. He has given presentations to Southern Ontario postcard clubs on the stories they tell of this great metropolis and the other stories they lead to.
PrevPreviousWelcome to Tuck’s Famous Old Gardens
NextNational Post Card WeekNext
9 Comments
Oldest
Newest Most Voted
Inline Feedbacks
View all comments
Keith Nickol

Asian cards are much collected in England as the ties to the area is strong, particularly India, Hong Kong, Singapore, Malaysia and the Pacific Islands. My Grandfather also worked in China as a banker. Burma is also collected. A group of American Baptists published a series of postcards and we’re able to convert a group in the north to become Christians and break away from Burma. That aspiration has had consequences.

Thanks for sharing part of your family history! Your cards are amazing. The information about your great-grandparents added to the images. We enjoyed the article.

A fascinating personal insight to a China that was opened to the west by Missionaries, Explorers, and Traders. Whether it was Bethune, Simpson or other Canadians – it is to our benefit that Kyle has shared these memories. We can look to postcards for cultural and social events and snapshots of everyday life from ages ago or modern and help understanding our fellow human beings who share this planet. It leaves me wanting more.

I am enjoying all these articles. I am in Australia (Scottish by birth). I collect Scottish terriers and Aberdeen Scotland post cards. My partner many different themes including William Wallace. Best wishes from Adelaide Australia

Imagine how exotic those postcards must have seemed to Americans. They still seem they are from another world.

I’d like to see more of these cards in future articles, Kyle. My grandfather was a minister, and several of the postcards and stamps I acquired when I began collecting came from his contacts around the world.

Those are very interesting cards showing what life was like in China in those days.

Fowchow, now fuling, is my hometown. Very interesting piece to read. Thank you!

Fascinating images, Kyle. Thank you for sharing them here. I wonder who took the photographs.