Ships That Pass In The Night 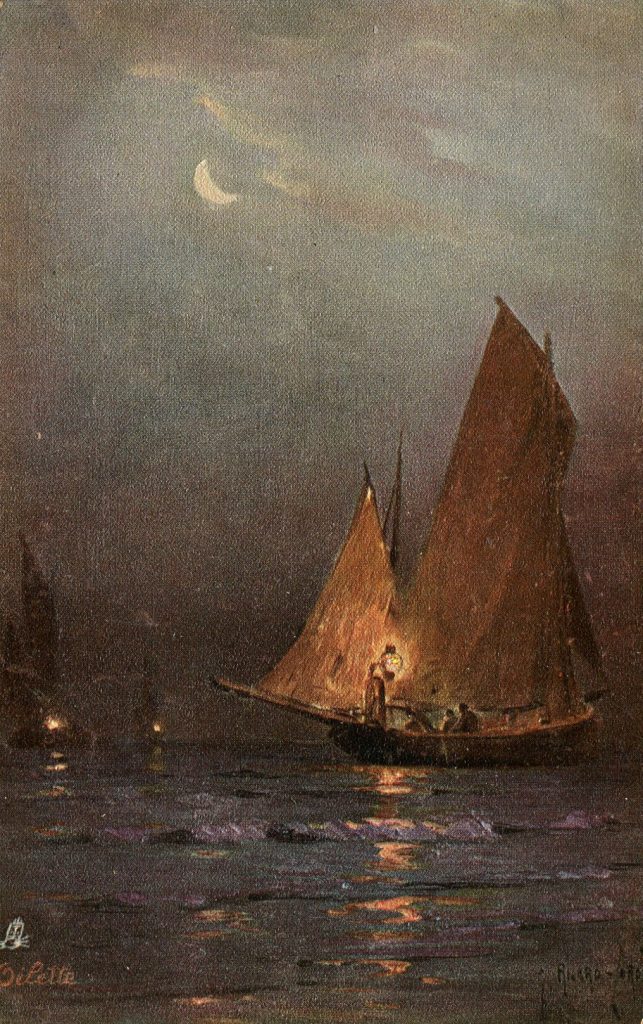 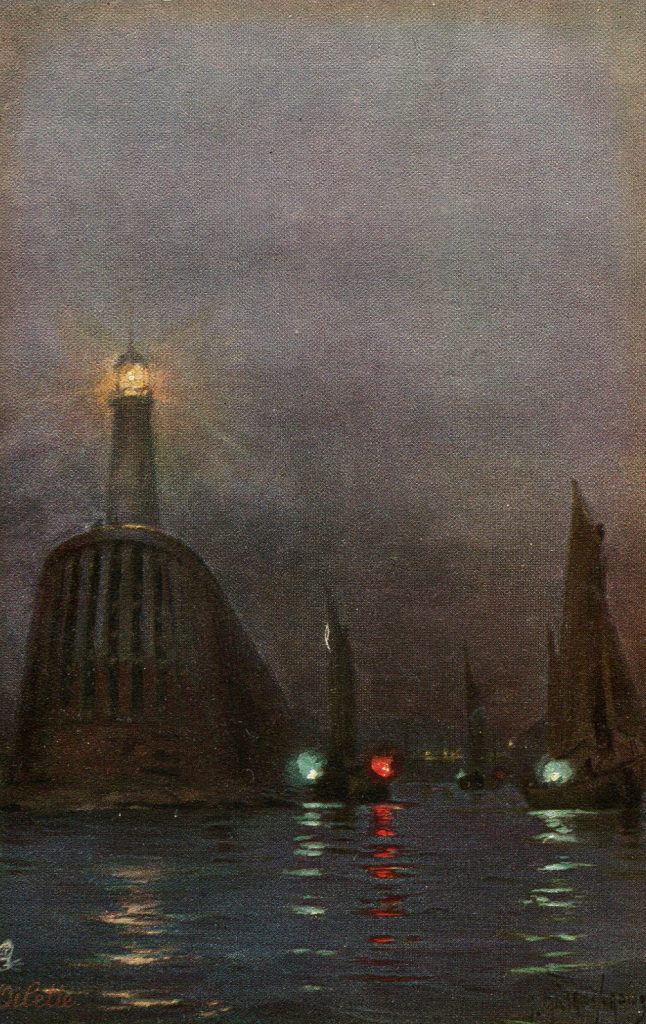 Raphael Tuck & Sons published this set of six cards taken from paintings done by Georges Ricard and made them available for the first time in their 1908 catalog. The set was published for the connoisseur. Each image is individually titled by the artist.

It could be that the six images were first published circa 1905 with French backs and apparently were very popular since they were republished again as Set #2715 and Set #8709. 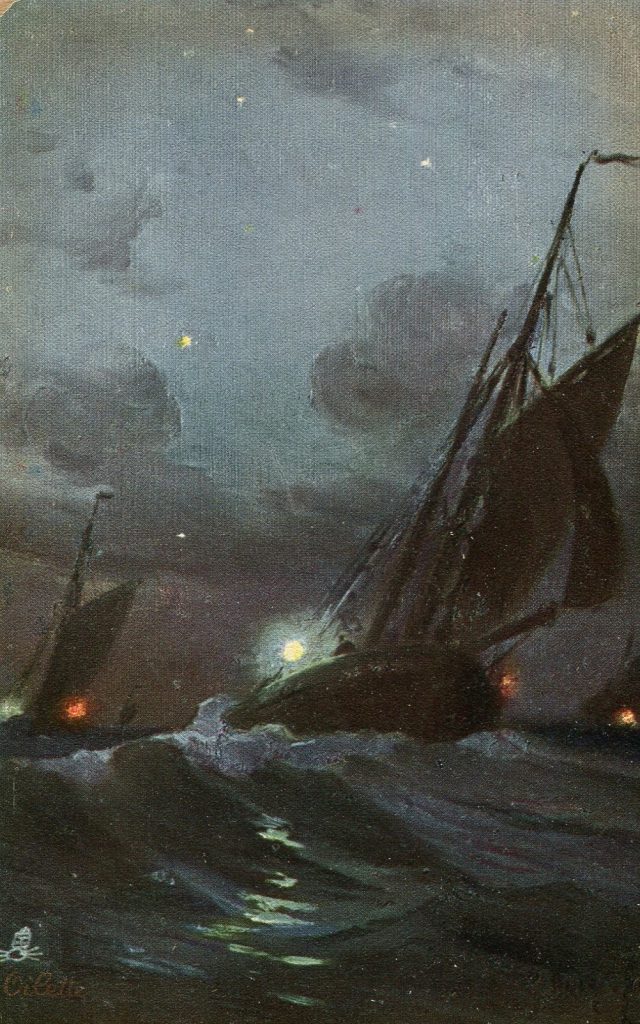 Fleet in a Gale 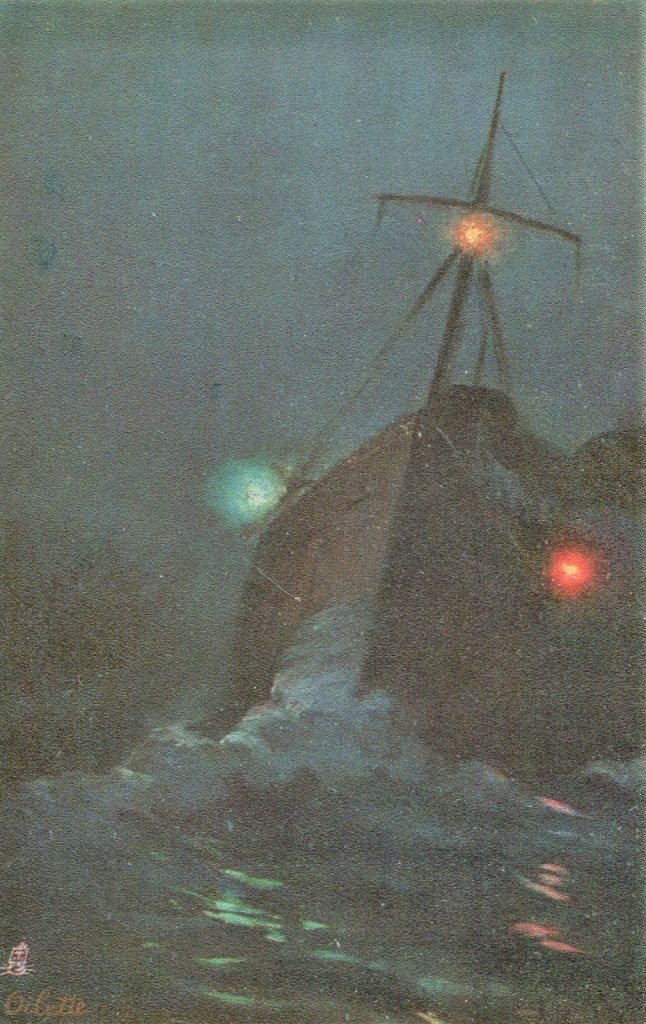 The current location of these paintings is unknown, but since they enjoyed lasting popularity at Victoria’s court, it is likely they are still in private collections. A second possibility is that Tuck purchased the originals as they did with about sixty percent of the art used on their postcards. 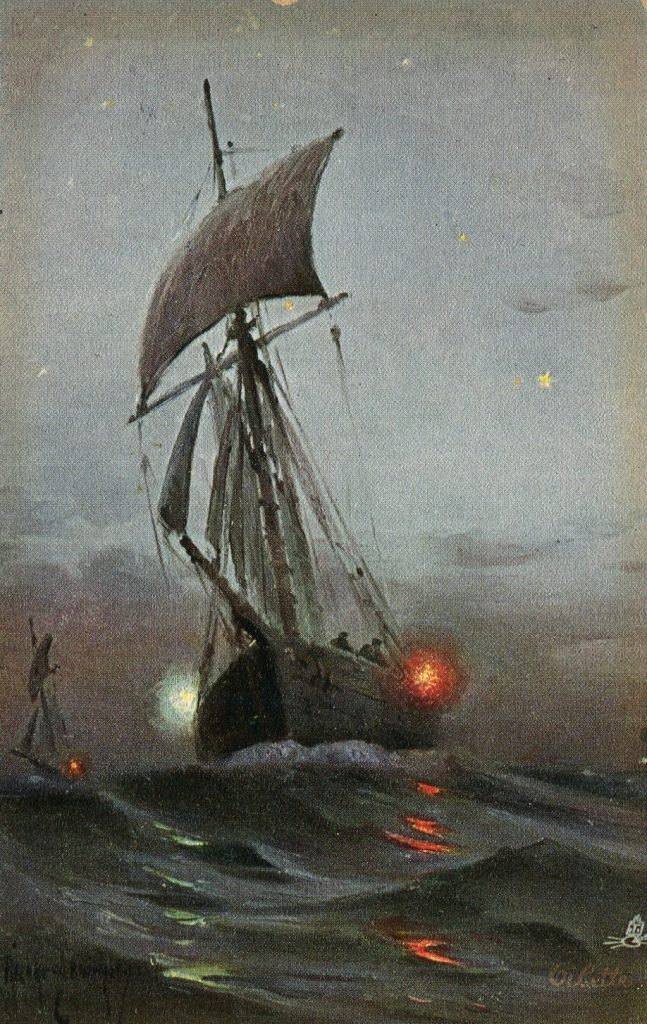 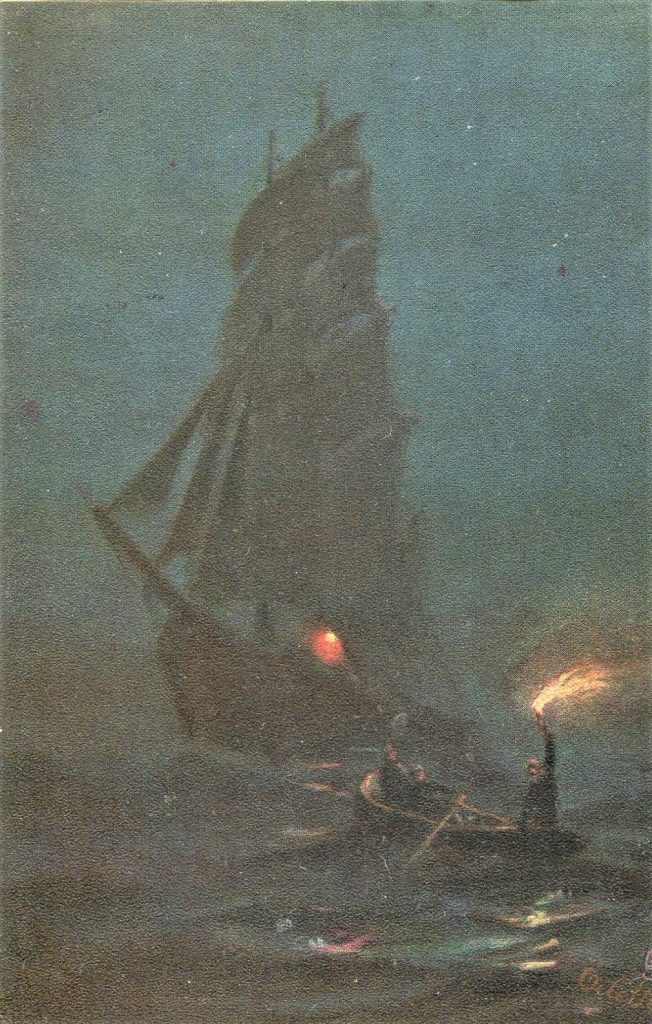 The artist was born in Lyon, France in January 1873, to Louis Ricard, a Frenchman and Georgina Marie Cordingley, a properly schooled Englishwoman. Georges was but two years old when his father died in 1875. At age 15, his mother enrolled him at a fine arts academy in Lyon, just before she relocated to Boulogne-sur-Mer.

In the fall of 1890 Georges moved to Paris and enrolled at the Julian Academy to study with Jean-Joseph Constant and Jules LeFevre. Ricard enjoyed tremendous success in Paris, but in 1892, when he was 19, his mother died and Georges was forced to move to London to live with his mother’s relatives. They would become his sole means of support. It may be that he was also forced to adopt the use of his mother’s surname, Cordingley, to gain the support he so desperately needed.

Ricard-Cordingley’s popularity in America, but mostly in Western Europe remained intact for the next three decades. He fairly divided his time between London and Paris but resided in Boulogne. He married in 1911 and had three children. He traveled widely in Normandie, Brittany, around the Mediterranean, and in North Africa.

The phrase, Ships That Pass in the Night.

The expression seems to appear first in the 1874 writings of Henry Wadsworth Longfellow. The phrase introduces Part IV of The Theologian’s Tale; Elizabeth. In the wake of history, these words may well have passed into obscurity and could have been forgotten. However, other authors used it and re-phrased iterations frequently appeared in works published worldwide.

One such occasion was twenty years later (1894) when the British suffragette writer Beatrice Harraden published a sentimental romance story of two patients in a tuberculosis sanitarium. Harraden used Longfellow’s words as her novel’s title. In hindsight mostly, the story captured the public’s imagination, and the title became a synonym for a failed and fleeting or hopeless love affair.

“Ships that pass in the night” is still dominate in English. It could happen to you!

The Staff of Postcard History offers this article for your enjoyment. It is a combined effort of many: our publisher, editor, webmaster and collectors/contributors far and wide. Please use the COMMENTS feature below to let us know how we're doing.
PrevPreviousI Do Wish You Were Nearer
NextCollecting on a Shoestring – In the 25¢ BoxesNext
2 Comments
Oldest
Newest Most Voted
Inline Feedbacks
View all comments
Stefan Sommerfield

A wonderful tale combining history, poetry and the romance of the sea. In the middle of reading Alexander Kent’s Bolitho series I imagined the sailors cold and wet on those ships. Evocative!

Lovely artwork ! The artist knows ships and I like his stars that they were likely guided by in those times. The writer’s, literary knowledge encourages me to read more of Longfellow since I was too busy with other things in high school and now am catching up on reading missed then.
Thanks !