Black cats never earned the “bum rap” they have gotten from society. From the eldest among us to the tiny tots clinging to Mommy’s apron strings, there seems to be in inherit concept that black cats represent something satanic, unworthy, suspicious, or evil. But, to balance the scale, there is ample evidence that black cats are regal and scholarly, but at the same time aloof and indifferent. 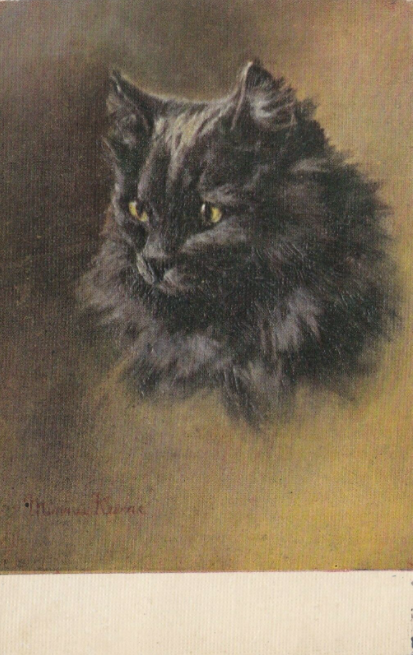 “Indifference,” this is where the rub begins. Come now all you dog lovers. When your puppy begs for his breakfast, you feed him and not more than a minute later he wants more and expresses himself by licking your face or some other “demand” such as a walk in the park.

Feed the cat that has chosen you as his keeper, (don’t kid yourself a cat is always in charge of the household he lives in) and when the bowl is clean, tabby will find a sunny spot on a windowsill and take his first nap of the day. Tabby is completely “indifferent” to what you do. This has been the way cats have been since the pharaohs of ancient Egypt began keeping inventories of their wealth. The black cats of Cleopatra, Ramses and Tutankhamun appeared high on the lists.

Black cats have enjoyed the center of society’s attention in many ways. Examples,

Otherwise, there is this,

In contemporary times, I quote from an article based on research completed in 2007 by National Geographic and announced by the American Society for the Prevention of Cruelty to Animals.

It may be of interest that each year around the Halloween season, there are warnings everywhere about keeping your black cat indoors, apparently rooted in a fear that roaming black kitties may be the target of some sort of nefarious wrongdoing, like ritualized abuse and even animal sacrifice. However, the ASPCA has, by and large, debunked this myth, basing the refutation on National Geographic work, in which “no confirmed statistics, court cases, or studies support the idea that serious satanic cult crime even exists.”

In previous contributions to Postcard History Online Magazine, your editor has made much light of my “legendary” accumulation of public architecture postcards. Well, I’m here to tell you the other half of my collection is as plentiful and most feature black cats. These are Sage’s favorites. (Just a reminder that Sage is my tabby. He is also my best friend.) Sage and I spend many winter nights enjoying the postcards in my albums.

Some of our favorite artists are Rene, who is French; Louis Wain, an Englishman; Minna Keen, a German born Canadian, and Eugen Hartung (the artist whose work was published by Alfred Mainzer and who is often, mistakenly, given credit for the art.

The card above is by Minna Keen.

The Black Cat silhouettes are by Rene. The set has six pieces, with titles in French. 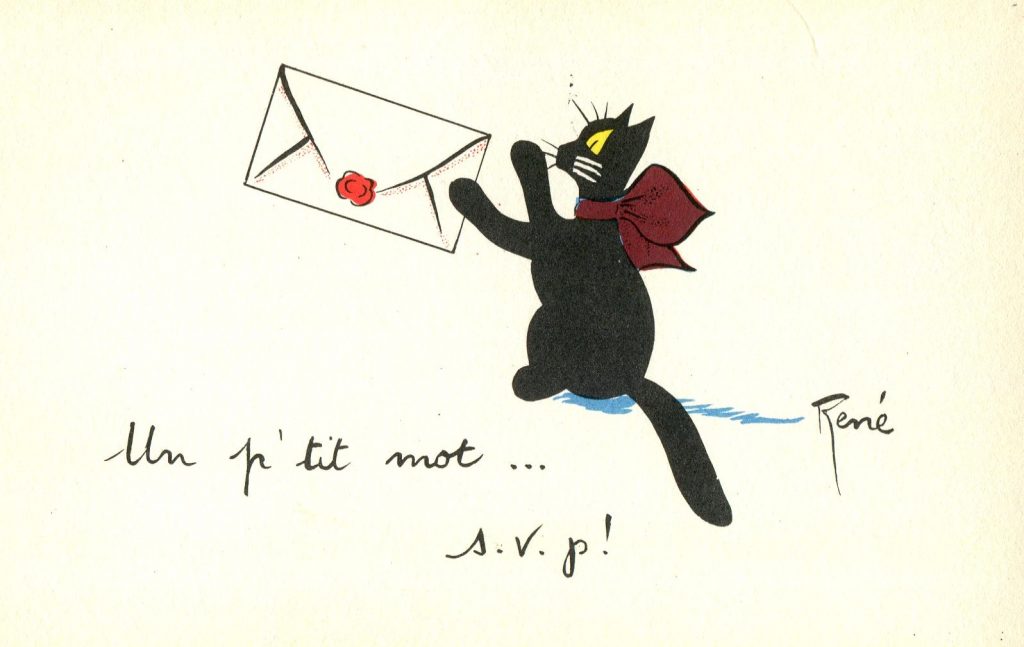 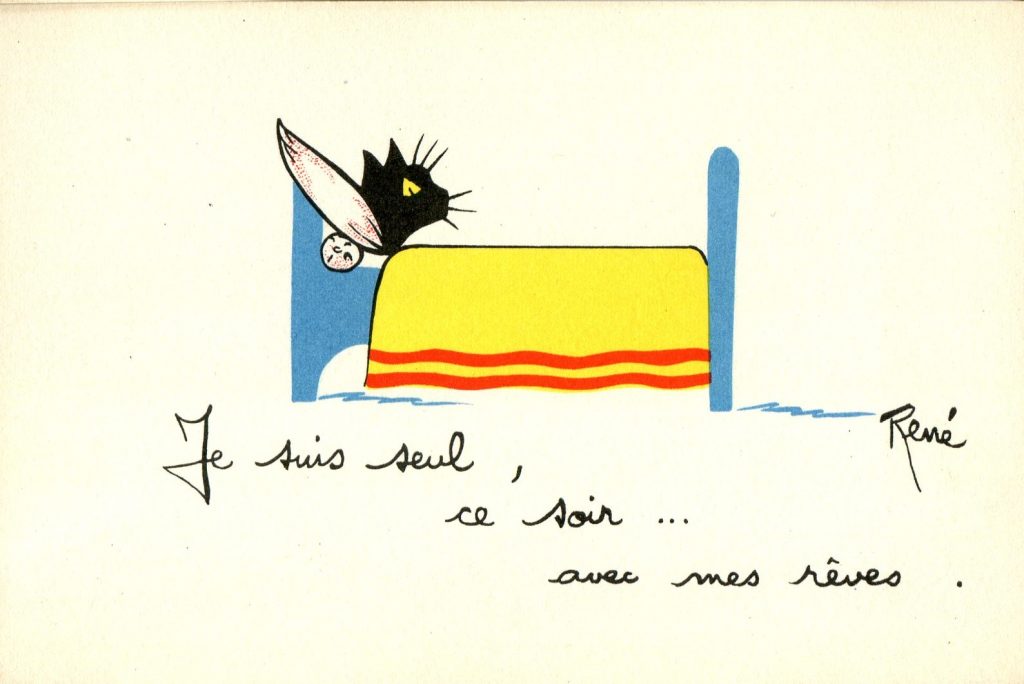 I’m alone, tonight with my dreams. 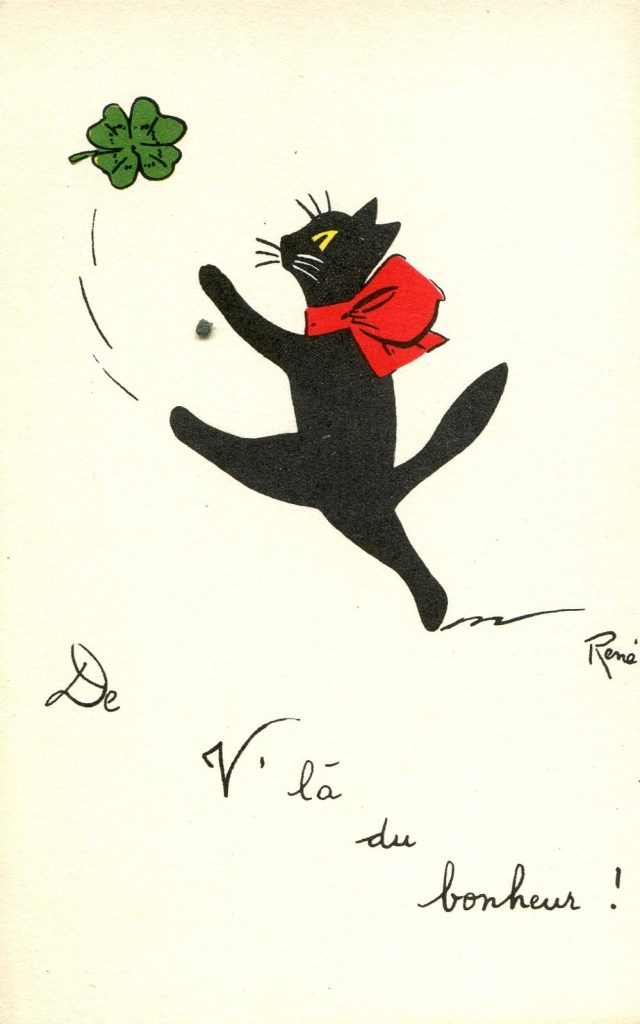 Of happiness (Happy as a Shamrock! 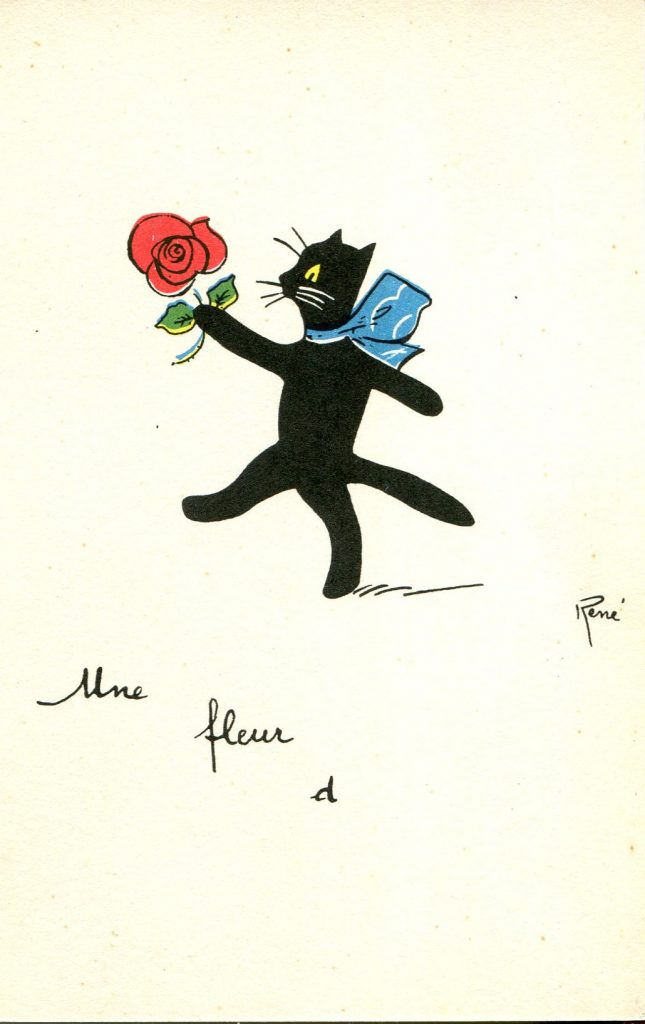 A flower (for the lady)

Black cats figure prominently in Hartung’s work. Here are three that well represent the 146 known cards that were published by Alfred Mainzer. 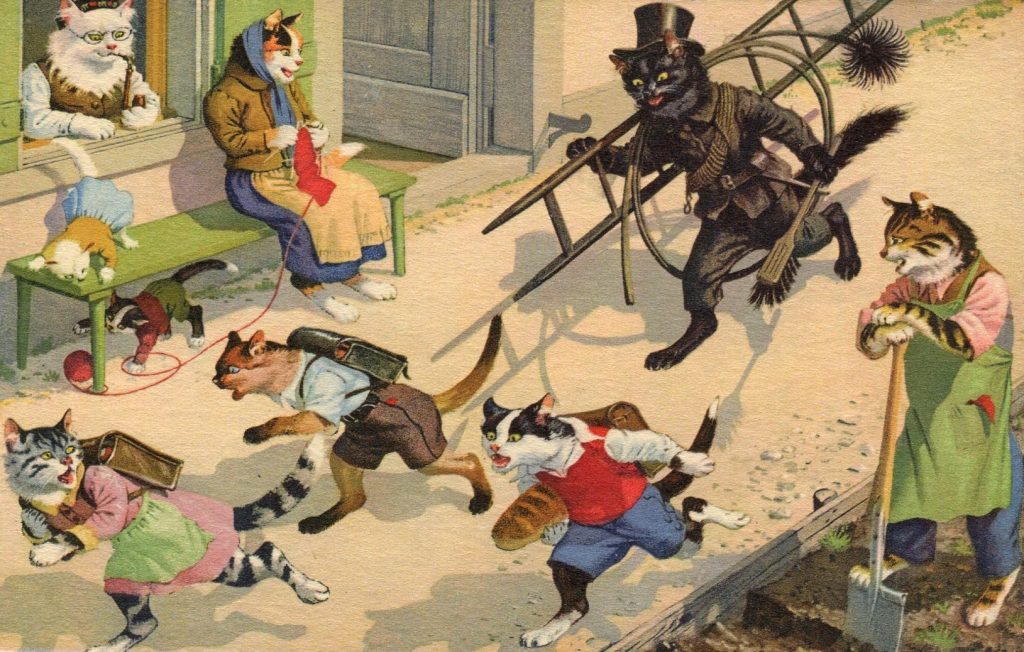 The workday begins as the kittens rush off to school, the parents work the garden and knit new mufflers, meanwhile grandpa Tom sits in his window with his morning pipe watching, the Chimney Sweep makes his way to his next performance. (Alfred Mainzer, NY, No. 4700, edition Zurich) 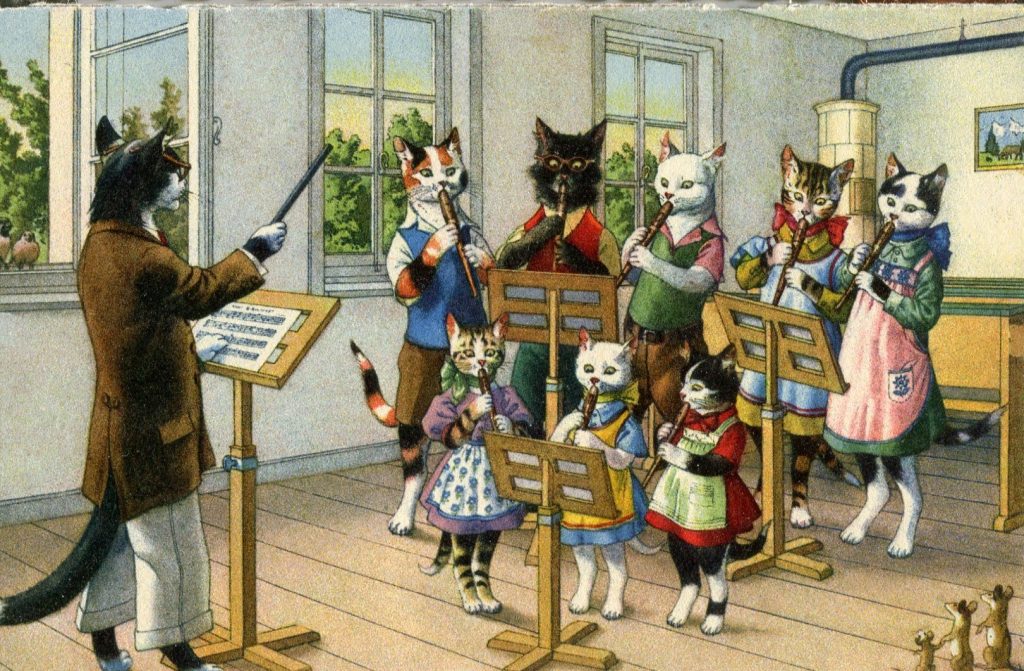 In music class as the Maestro counts the beat; the calico, the black cat, and the white face lead the others in a recorder concert, accompanied by junior players. The audience (the mice in the lower right corner) seems to enjoy the music. (Alfred Mainzer, NY, No. 4757, edition Zurich) 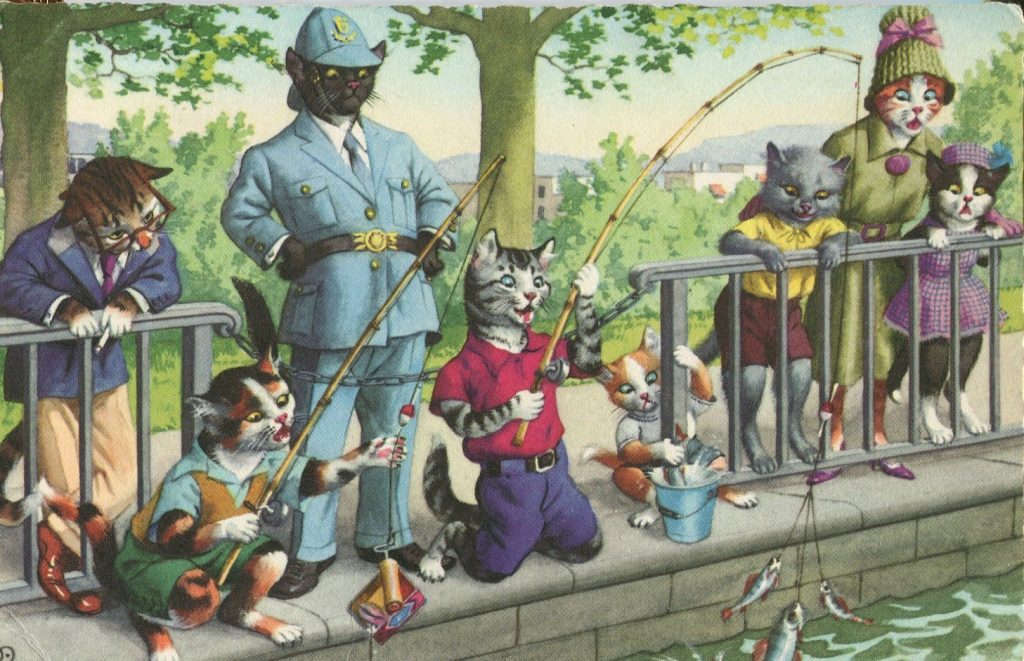 The black cat (policecat) watches as the calico and the tabby fish for what may be their breakfast. The mother of a Russian Blue and his sister watch in amazement. It is uncertain if fishing is legal in this parkland pond. (Alfred Mainzer, Long Island, NY, No. 4925, edition Belgium)

Dr. Dancer is joining Postcard History as a pictorial tour guide. Nate has been collecting postcards for four decades and has amassed a vast collection and stores of knowledge on his favorite topic - public architecture. He recently became a pensioner. He and his wife live in north Scotland with their precious cat named Sage.
PrevPreviousThe Bees, their Honey, the Moon + Love & Marriage = Honeymoon
NextDavid Livingstone, MissionaryNext
2 Comments
Oldest
Newest Most Voted
Inline Feedbacks
View all comments
Bob Kozak

I find the Hartung cards the most appealing of those depicted in this article.

As owners of black show cats (Bombays), we enjoyed the information in this article. Thank you!