McDonald’s opened for business in Wichita, Kansas, while I was still an undergraduate at Wichita State University in the early 1960’s. Most of my classes were in the morning and on my way home it was convenient to stop at the Golden Arches to have lunch: a hamburger and a small Coke for the grand expenditure of 26¢.

In those days most of the help inside were young men moonlighting from McConnell Air Force Base. The McConnell men were dependable, and with the existing military dress code, each one had short hair and appeared “clean cut,” just right for this drive-in carry-out hamburger chain. The name of the game was to take your order and hand you the goods in a sack in the shortest amount of time. Everyone remarked how fast they were at McDonald’s.

Their advertising character at that time was a hamburger-faced fellow named “Speedee.” His image was on the-sacks and drink cups, and also on top of the arch sign out front. 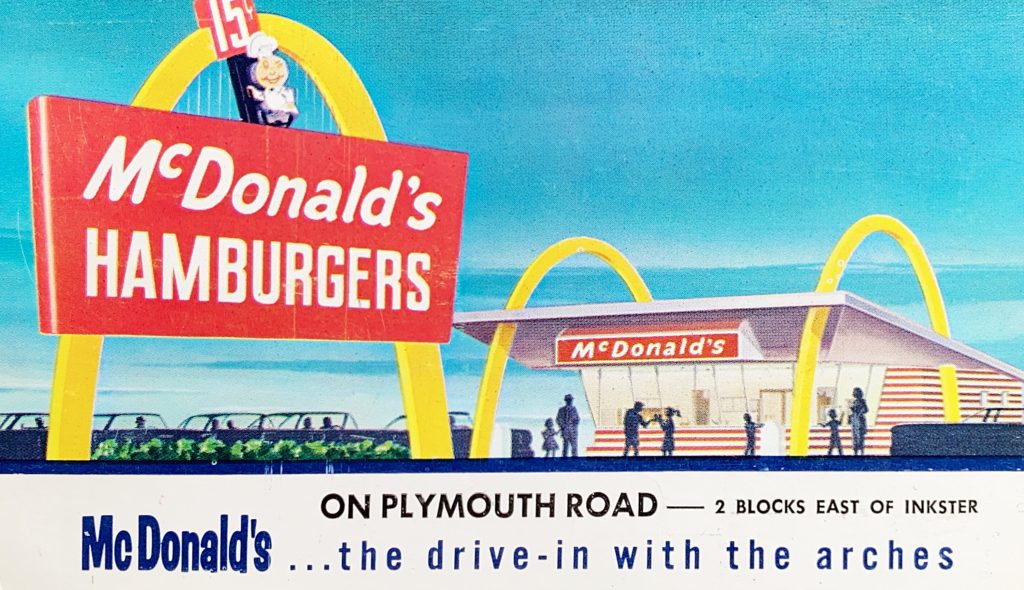 At some point Speedee was superseded by a clown named Ronald, and you know the story from there. Ronald McDonald has become a household name and is perhaps the most famous clown since Emmet Kelly.

Every so often, McDonald’s had promotional giveaways, such as an eraser, a pencil, a plastic hand puppet, or a plastic plate with their name and logo clearly printed on the item. Being a natural collector, I brought these things home and saved them. It is a pity that I did not try for duplicates in those early days, because now these pieces are impossible to find. Through the years I added more items, but it was not until moving back to Wichita after being away at graduate school for several years that I rediscovered McDonald’s in a big way. By then I was married and we had our first child, and it seemed only right to dine at the “Rainbow Room” every so often.

When Ronald began offering Happy Meals, with a prize in every box we bought them. The prizes increased the range of premiums and nearly every one of these was marked McDonald’s and was year-dated, a natural identification for later serious cataloging and collecting. I confess that our children have seldom enjoyed their premiums, for they have nearly always gone to Dad, who wants them in their cellophane bags, unassembled and in mint condition for collecting purposes.

It was also after we returned to Wichita that I discovered my first McDonald’s postcard. I was in Hutchinson, Kansas, buying from a friend, and in going through boxes and boxes of mixed views, I came across a colorful chrome advertising a Free 100% Beef Big Mac Sandwich when this postcard was presented at the new McDonald’s in-town. The postcard had been mailed by rate and sent to the resident at a given address, making it what every-one fondly calls junk mail. This discovery was a highlight that broadened my awareness of McDonald’s collectibles.

I wrote to Hamburger Central, the corporate headquarters of McDonald’s Oak Brook, Illinois, asking them for postcards and any information about their premiums. I soon discovered that such knowledge is top secret and that no samples or release of information was to be obtained. Promotion is a big part of McDonald’s game plan and to casually give out such intelligence would be unthinkable. How would they know that I was not a corporate spy for Burger King, Hardee’s, or Wendy’s? Besides, my request probably sounded pretty strange.

To expand my collection I was forced to return to the collectors’ market and to advertise and correspond with those who might be willing to help. This avenue proved fruitful and by the fall of 1982 I had fifteen different postcards, more than enough to mount a board for our annual Wichita Postcard Club’s Show. I believe the exhibit surprised dealers and collectors alike, for I had more comments about the McDonald’s board than I did for my other entries. This interest was rewarded with a blue ribbon in the modern classification of exhibits.

When writing about the discovery I made in Hutchinson, Kansas, I mentioned that the postcard was a piece of junk mail, and this is the case with many examples in my collection. It is because of this fact that I feel these McDonald’s postcards are so hard to find. A number of the ones I have are also “good for” a free hamburger, or French fries, or say 10¢ off a Big Mac. The recipient of the postcard would either toss it out with the other throw-away mail received that day or use the postcard as a coupon for a part of their next meal at McDonald’s. Very few were saved. 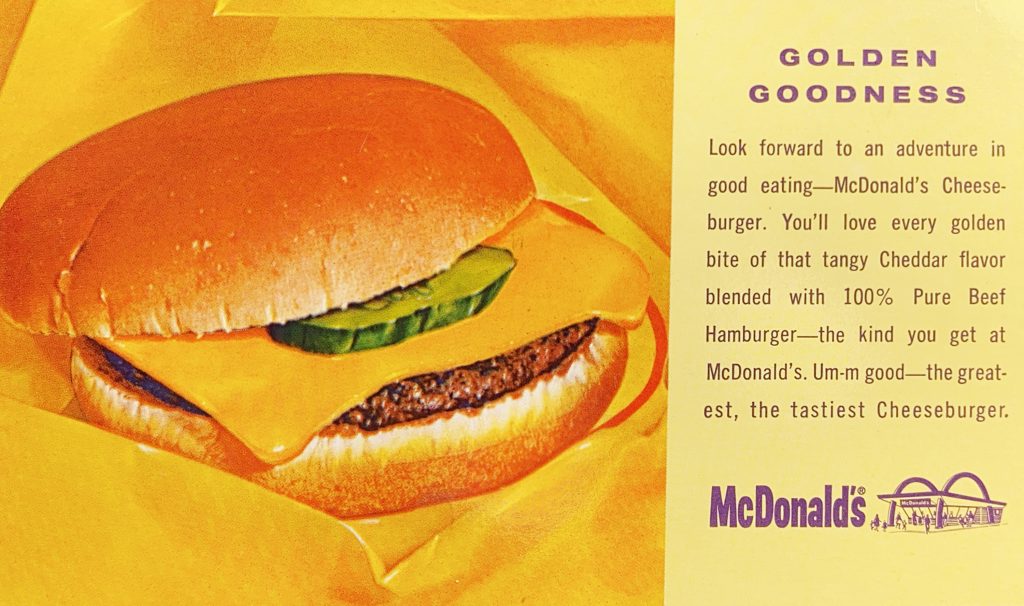 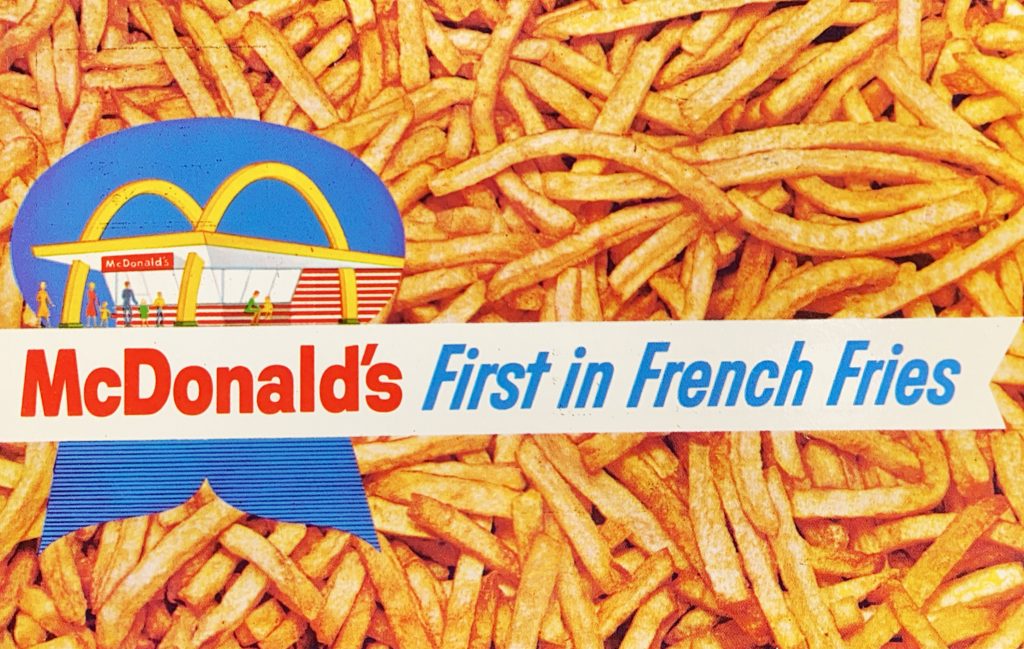 The New Big Mac postcard is even more interesting to collectors because it is a 3-D image (sorry, it is not illustrated in this article). It shows the sandwich as if it were right before you. The 49-cent price-tag for the Big Mac that is indicated on the back tells us the postcard was issued years ago. 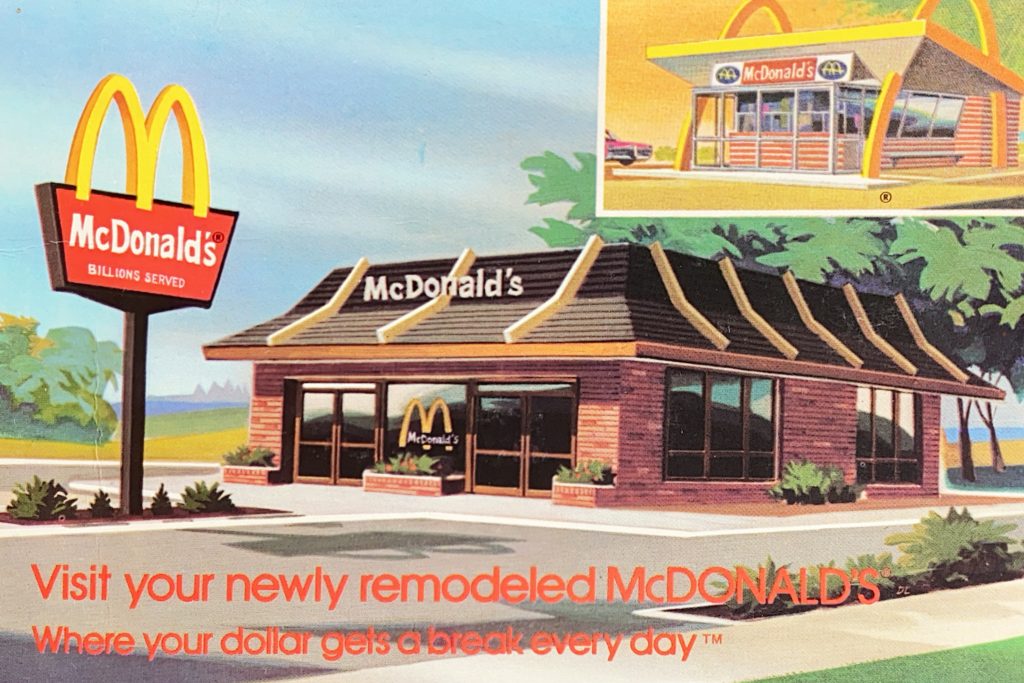 When there were architectural changes, the two big ones were the waiting area was enclosed and the more recent remodelings when patrons are encouraged to come inside and sit down. McDonald’s has come nearly full circle in their concept of service, from drive-in only to dine-in/drive-through aspects that are so popular today.

McDonald’s is good about promoting birthday parties for youngsters and in most every restaurant there is a box with a form that parents can fill out, giving the child’s name and address and birthdate. Ten days or so before his birthday, the child receives a Happy Birthday postcard in the mail from Ronald McDonald and this greeting may be redeemed for a free hamburger, French fries, and soft drink. Three different versions of these greetings are known. 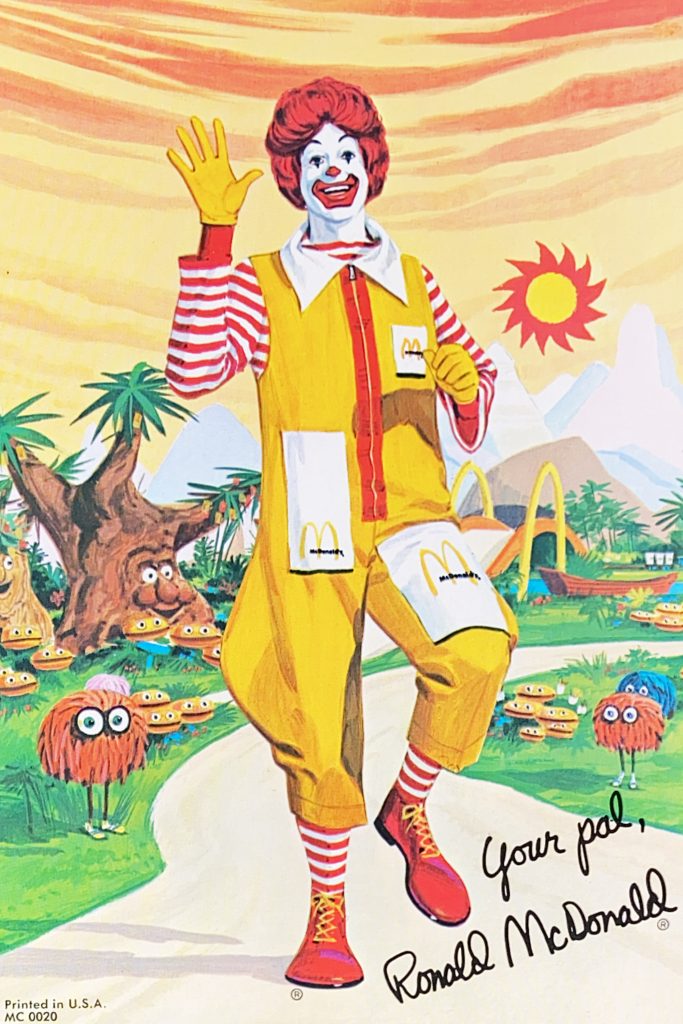 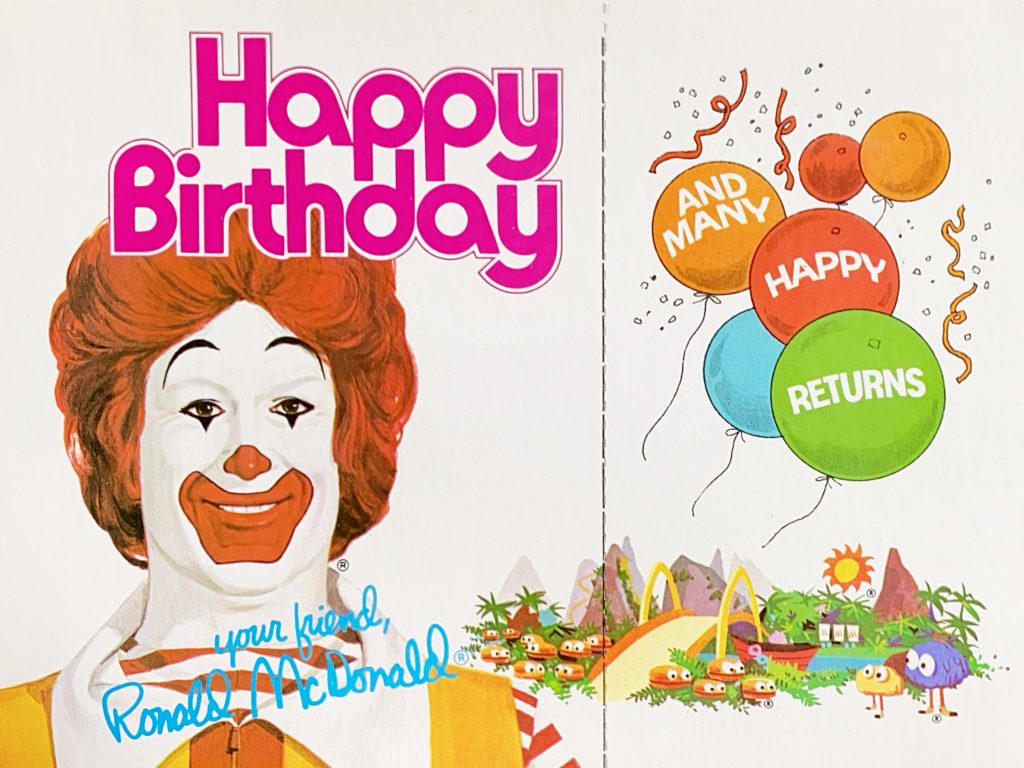 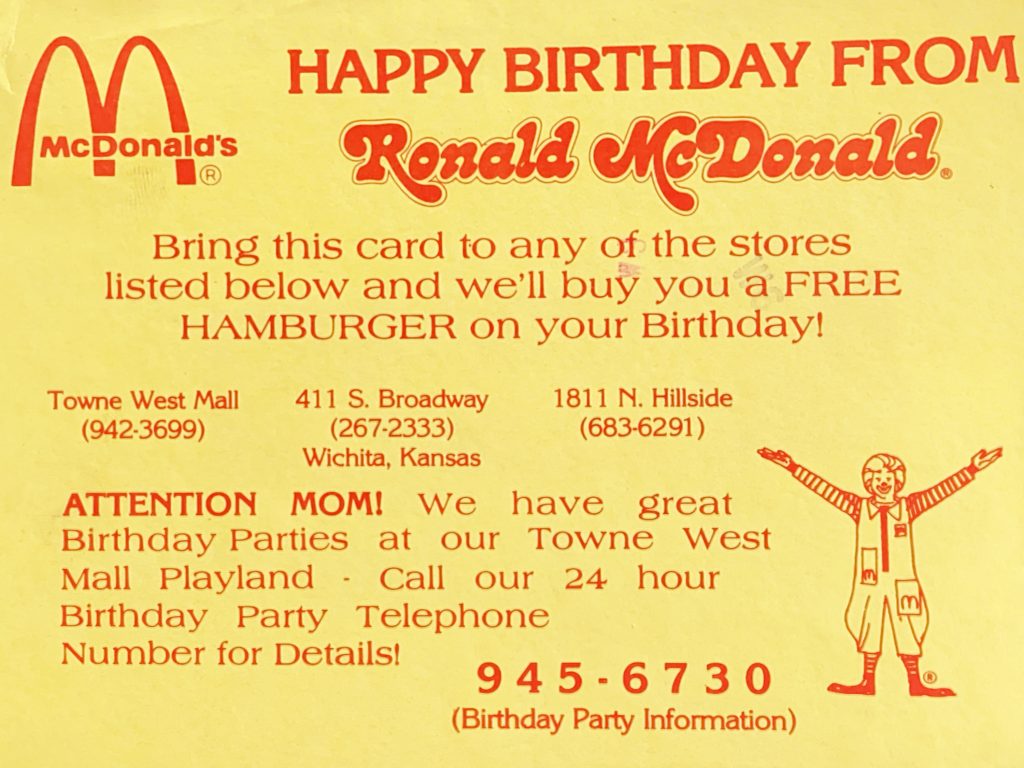 And you guessed it, our children dutifully turned over their postcards to Dad instead of cashing them in at Ronald’s place for the goodies! 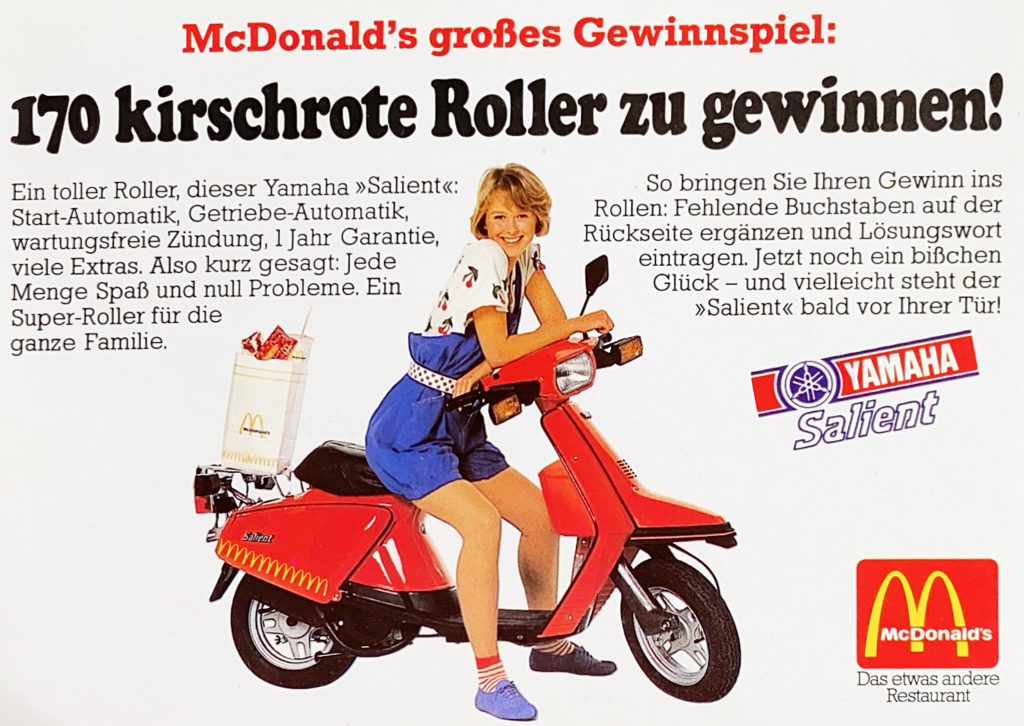 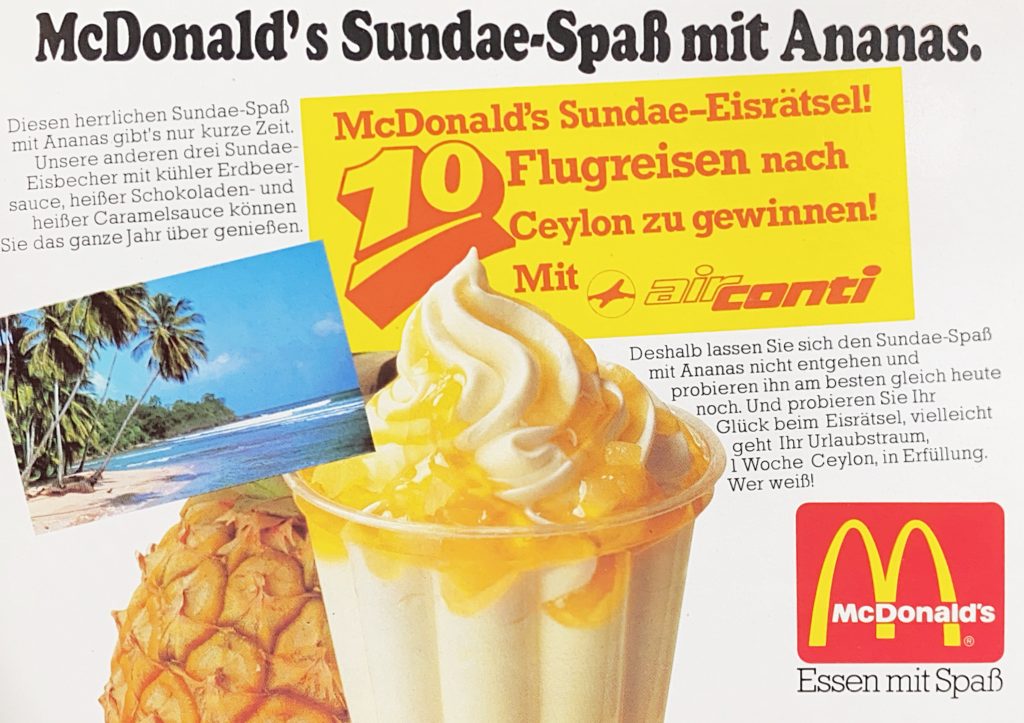 Collector friends from as far away as West Germany have sent me McDonald’s postcards from restaurants in Munich. The one is promoting sundaes and a grand prize trip to Ceylon, and the other is for a Yamaha with golden arches on the fenders!

McDonald’s Big Mac Coach, the luxury suite on wheels, available free of charge to civic organizations, and non-profit groups in Minnesota, Iowa, Wisconsin, and the Dakotas. This postcard was undoubtedly given to passengers so that they might write home and tell others about the Big Mac Coach.

In this article I have told how I became interested in collecting McDonald’s postcards and several of the stories behind particular acquisitions. I would urge readers to take a closer look at their junk mail in coming days. Think twice before you round file any modern advertising postcards, because there is bound to be a collector for that product or service. Maybe this article will have encouraged you to see what you might assemble, and in so doing you will be documenting a lifestyle that is always changing and in just a few years will reflect the “remember when” attitude that we all reminisce about.

In elementary school it seemed logical that neighbors in my NW Ohio neighborhood would find delivery of the McDonald’s postcard unnecessary. Not wanting them to go to waste it seemed my waist would hum with ingredients from this freebee card (Schwinn Tornado 2 speed bicycle could direct me 1 1/2 miles to location). When my parents found this small stack in my room they made me go back to each house and return them. Seemed this action placed them in a position of being food needy which, fortunately, was not the case. Supreme story, Hal, as flashback to lessons of… Read more »

I don’t recall ever receiving any McDonald’s postcards, but I wish I could find the coloring book I acquired during my childhood that features Ronald on his flying hamburger.

Wonderful collection of McDonald’s cards! As a kid in L.A. we often visited and ate there but i do not remember getting such postcards in the mail. I suspect that the postcards were focused on certain areas of the country.

Hi Shav. Looking back now after all of these years, I think that the postcards were probably first mailed when a new location was opened, to neighbors in the area to introduce the golden arches. Then when new products were introduced, like a fish filet sandwich or quarter pounder, then sometimes a postcard mailer was sent out then, and much later, some locations used postcards for birthday promotions. The good old days for food and restaurant introductions happened years ago. The restaurants are franchised and the use of mailers is decided by individual owners.

An artist friend of mine (now deceased) did a lot of ads for McDonald’s. Many of his original works were on display at his wake. Now I’m sorry I did not take any photos of his work but it would not have been appropriate to do so at that time. I do have two of his calendars that he did for TRW back in the 1980’s.He was good enough to sign both of them for me.

In 1980 a floating McDonald’s restaurant opened for business on the St.Louis riverfront near the Gateway Arch. They sold a series of four postcards. They closed after 20 years. Apparently there was a floating McBarge in Canada.