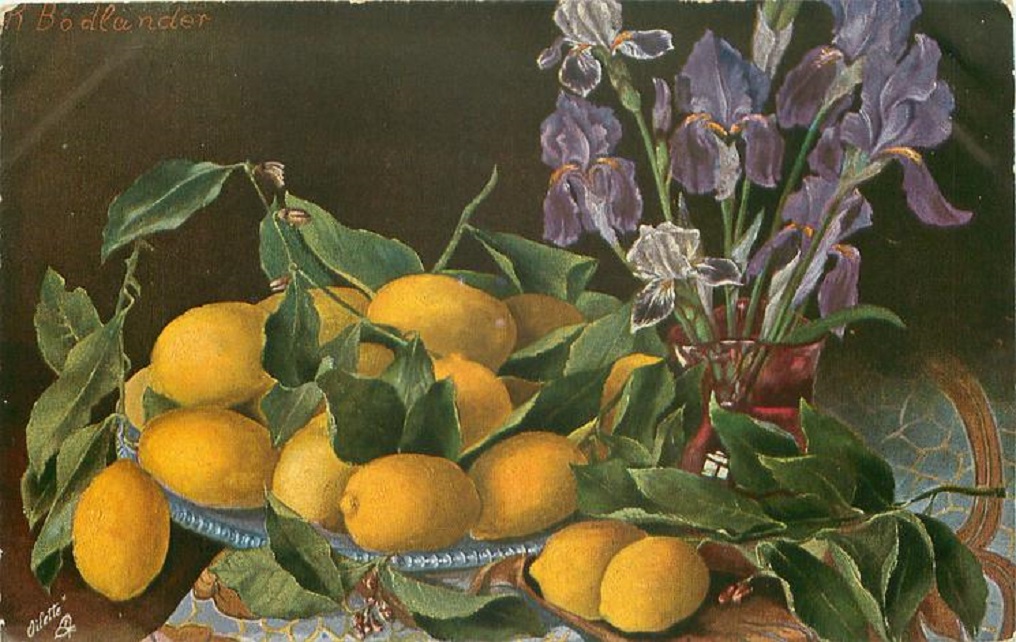 This untitled still-life of lemons and flowers is one of a six-card set published by Tuck. The first known date of use was August 15, 1909, a few days over 112 years ago. The other cards in the set also feature lemons, nuts, and other fruit.

The calendar is how we learned that August 29 is National Lemon Juice Day!

When life hands you lemons, make lemonade! And when life hands you a chance to celebrate National Lemon Juice Day on August 29, do it! This puckery fruit may be hard to taste all on its own, but it’s a versatile addition to many of your favorite drinks, dishes, and even wellness concoctions.

Lemons are the main ingredient in one of America’s favorite summertime beverages and a necessary accessory to any seafood feast. But don’t just drink the juice: use the oil from the lemon rind to make a nontoxic insect repellant or spray the juice on your hair to give it a lighter, beachier color! The options for lemons are endless!

As endless as the options are we all recognize the extreme acidity of lemons and avoid them except for the very small amounts used in beverages, food, and medicinal remedies. It seems to be common knowledge that lemons (native to central Asia and tropical climates) were brought to North America in 1493 by Columbus.

Since the 1490s, some other “lemon” numbers that may be less well known are: the average lemon tree lives for around 50 years and can produce over 600 pounds of lemons every year. There is one variety of lemon (not commonly available in North America) that is sweet; it is called a Ujukitsu, a hybrid citrus plant from Japan that was developed in the 1950s. The juice of a lemon is so intense that only a 5% solution is needed to produce a palatable drink.

When all the facts are in, the nonsense numbers are also amusing. You should know that the Guinness Book of World Records has certified the world’s largest lemon at just over 12 pounds. The world’s largest lemon tree nursery, with more than a half-million trees is in Argentina. And, since you can’t think, see, or say “lemon” without bringing to mind meringue pies; you may like to know that the largest one in history was baked in 1998 at Clarendon College in Nottingham, England – it weighed 2,866 pounds.

Did you know that lemon juice is a much better detoxification agent than caffeine? It’s true! It works more than twice as fast as a cleansing agent of the digestive system.

Lemons on postcards are fun and yet quite mysterious since the social meaning of the word has changed so dramatically in the last twelve decades. The following story of a lemon tells why.

In the 1900s, an award-winning lemon named the Bonnie Brae was a popular one grown in southern California. It first came to the public’s notice when it won the blue-ribbon at the New Orleans World’s Fair in 1885. It was a seedless variety and thought to be a hybrid. As the popularity of the fruit spread and demand was high, the lemon industry in quick order suffered from a series of catastrophes; a drought that reached critical status about 1912, a freeze in 1913 which killed thousands of trees, and a flood that eroded nurseries and orchards in 1915.

The Bonnie Brae had a very thin rind and had a propensity to split in extreme conditions. When the rind broke open it immediately attracted insects which naturally spoiled the fruit and rendered it unsellable. The name became a sobriquet for a naughty child or an adult who frequently acted in childish ways.

That was all it took to inspire postcard makers to use lemons as a topic of cards poking fun at everything and everyone from little children to mothers-in-law. 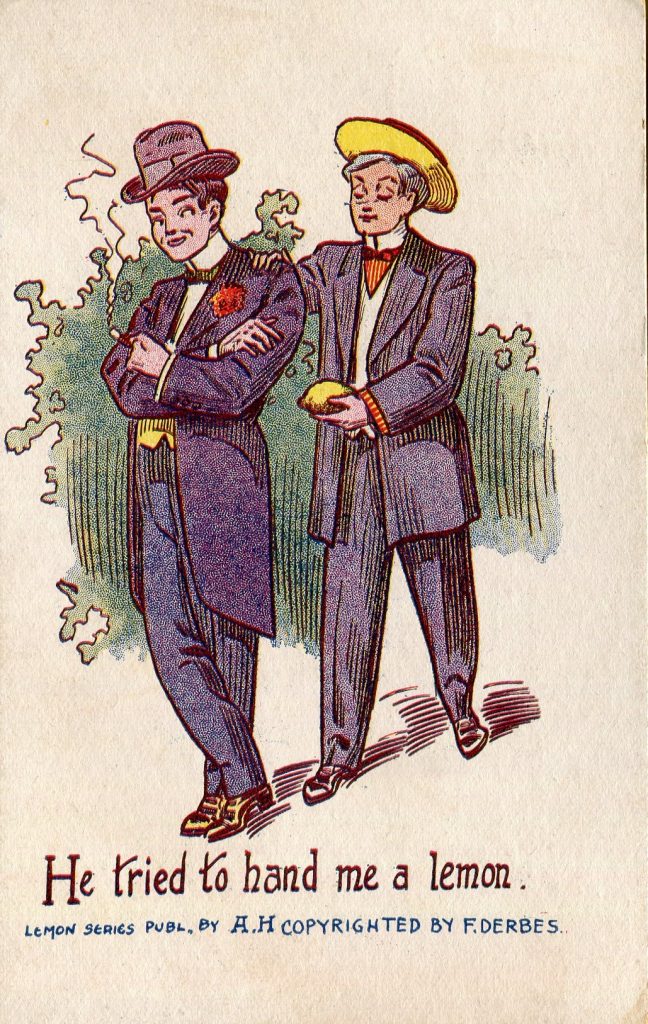 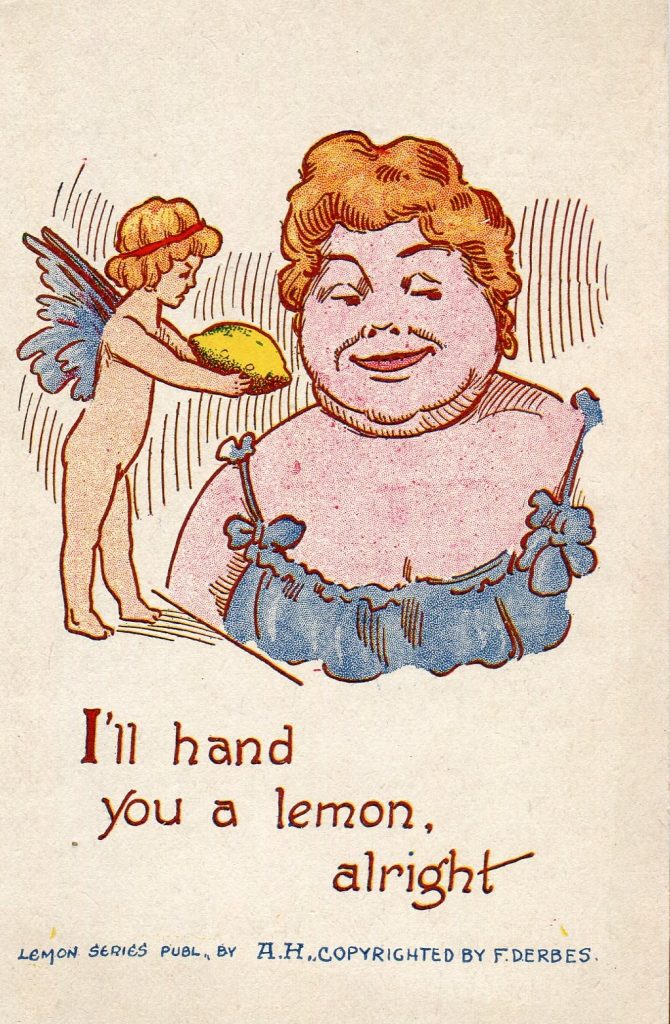 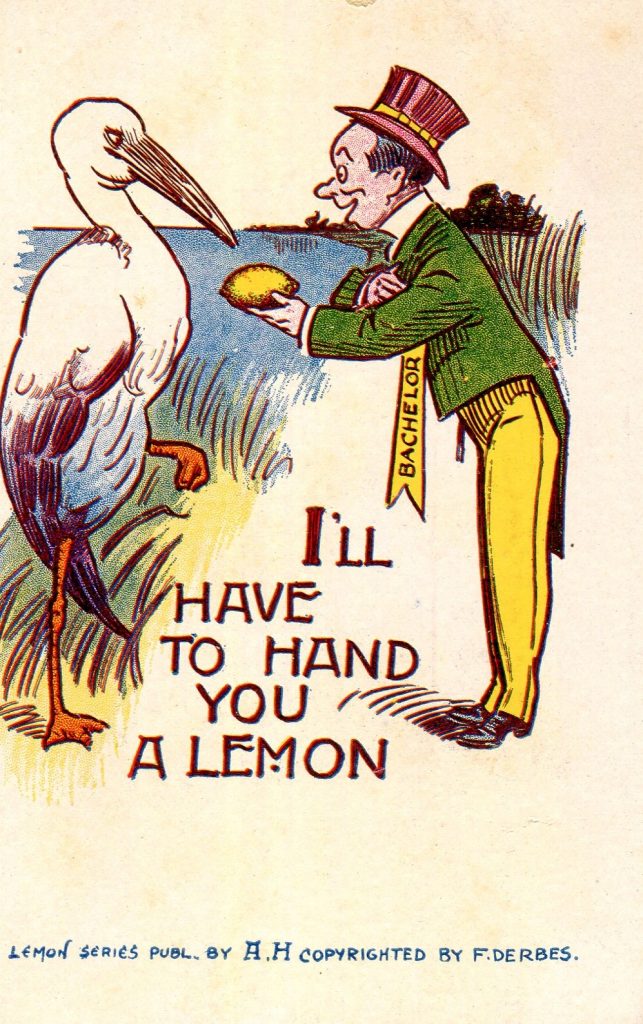 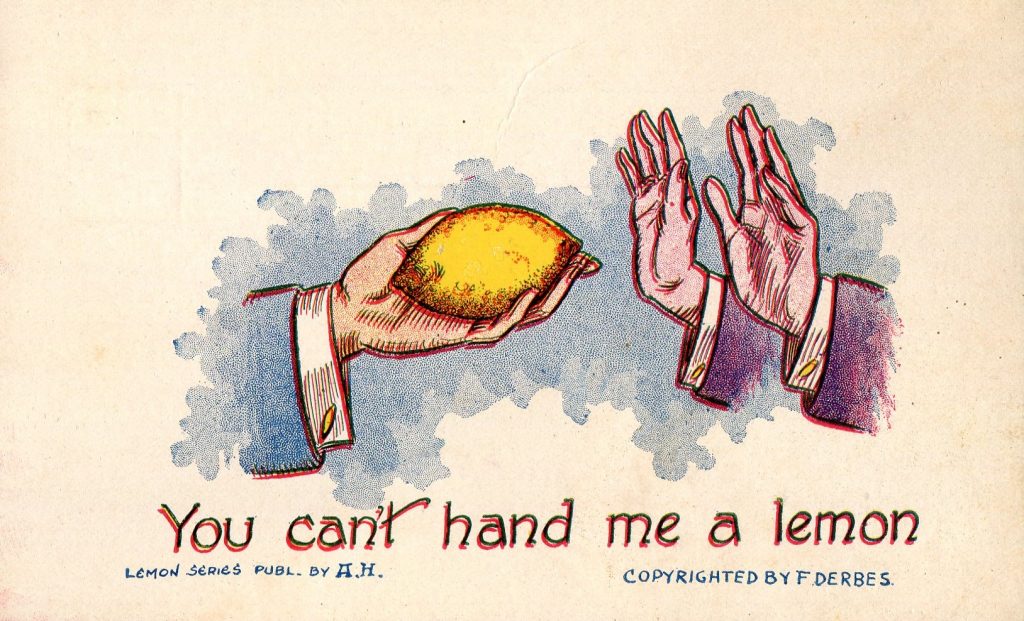 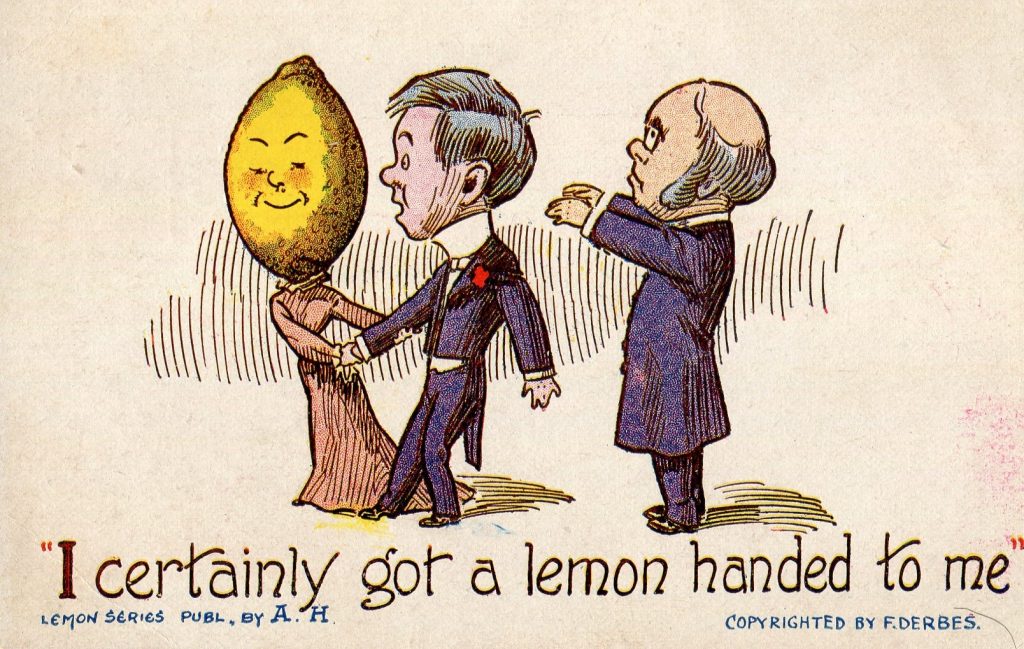 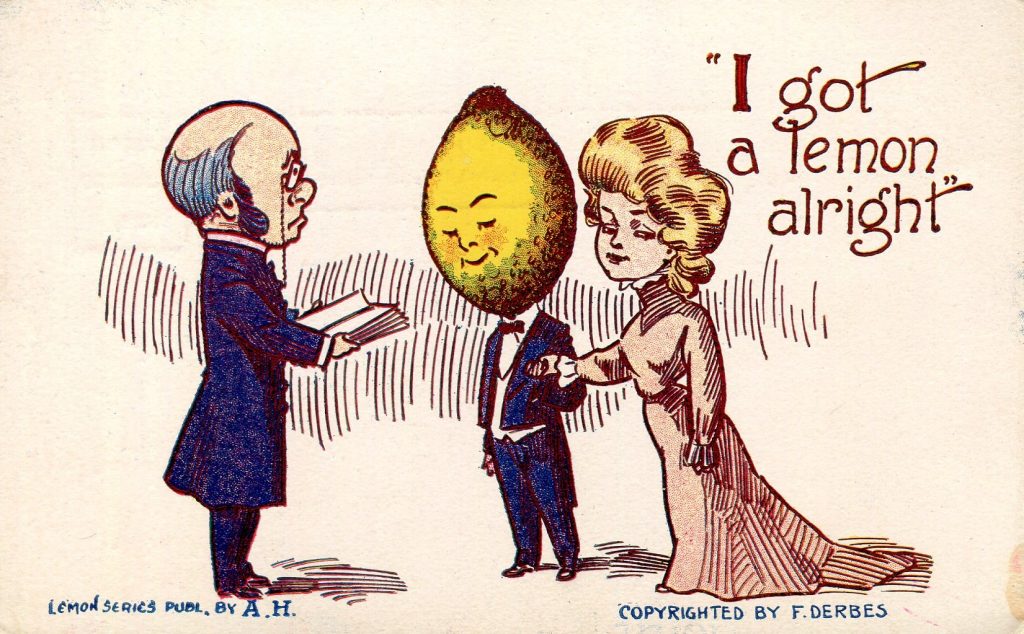 This set of six cards was published circa 1905 by Albert Hahn, a Manhattan publisher from 1901 to 1919. The A.H. product line included hand colored view cards and art comic topics. The artist is unknown, except it is possible that it was a Francis Derbes (1877-1923), a newspaper cartoonist who lived in Brooklyn and worked for the Sunday Mercury (a highly respected weekly known as the first to publish opinion pieces by Mark Twain and the first New York paper to cover baseball).

The Staff of Postcard History offers this article for your enjoyment. It is a combined effort of many: our publisher, editor, webmaster and collectors/contributors far and wide. Please use the COMMENTS feature below to let us know how we're doing.
PrevPreviousThe Sad Story of Sugar Loaf Rock
NextColumbia UniversityNext
8 Comments
Oldest
Newest Most Voted
Inline Feedbacks
View all comments
Mary Katz

As I read this article, I couldn’t help hearing Trini Lopez singing “Lemon tree very pretty, and the lemon flower so sweet/ But the fruit of the lovely lemon is impossible to eat”

Always interesting and fun to read! You are doing GREAT.

I have seen postcards with “NOW37.” I have been told that is LEMON upside down. And that it was a politer way to send the same message.

My barber and good friend has a big lemon that opens up and she is inside dispensing lemonade with an umbrella in the crushed ice at the top of the glass. Impressive presentation. I copied this link and sent it to her to read. I know she will get a kick out of this. Thanks for another eye opener to collecting postcards.

Leah, hi. If this LS the Eating Reading editor, would be so groovy to hear from you. ~~ Jan, your former ER correspondent P.O. Box 14143 Tallahassee fl 32317z