During the years of renaissance living, England was beset with property law that demanded as much skill as a modern-day real estate lawyer. One of the most egregious of the laws was the control, by the King, of your ability or desire to “crenellate” your property. In other words, it was the king’s privilege to deny your ability to defend yourself or your property against unwanted raid or seizure by anyone who wished you harm. Without a License to Crenellate your property was totally vulnerable.

In and about the times of King Henry V, it was found that the castles in England vastly outnumber the licenses to crenellate. Some inventive tax collectors therefore devised taxing schemes to “balance-the-books.”

The order to comply went out as a Royal edict. The announcement included a deadline by which any landowner or other such person who had fortified without a license must obtain a Royal Pardon. Pardons were only available after delivery of a payment to a predetermined royal tax office. After the pardon was certified the landowner could keep his crenelations, redesign, or increase any and all fortification.

Without further clarification, you know that the degree of civil uproar was considerable.

Architecture, being both an art and science defines each integral piece of all structures. One imperative part of a fortification is the turret. Being so defined, a tower that protrudes beyond the ordinary surface of a wall, a terret provides a defensive position from which controlled defensive maneuvers can be planned and executed.

For a turret to serve its purpose it needs to show two qualities: 1. A roof, either pointed or domed; 2. A floor traditionally supported by a corbel that was of considerable height above ground level. Some part of the turret must include “crenelations” or openings from which full observations of activities beyond the ordinary surface of its wall may be made, and to direct proper countering.

In modern times and to a degree before, as their military use faded, turrets were used for decorative purposes. Today, gun turrets are used to mount mechanized weapons and a crew of operators. Such may be found on warships, aircraft, and land fortifications such as arsenals.

It is only natural that construction by North Americans would imitate or mimic European architectural styles. It started early, less than 50 years after Columbus’s first voyage to the Americas, in 1539. As the Castillo San Felipe del Morro (El Morro), the citadel that rose above the beach in San Juan, Puerto Rico, it was apparent that turrets, complete with crenels would become features on the American landscape. 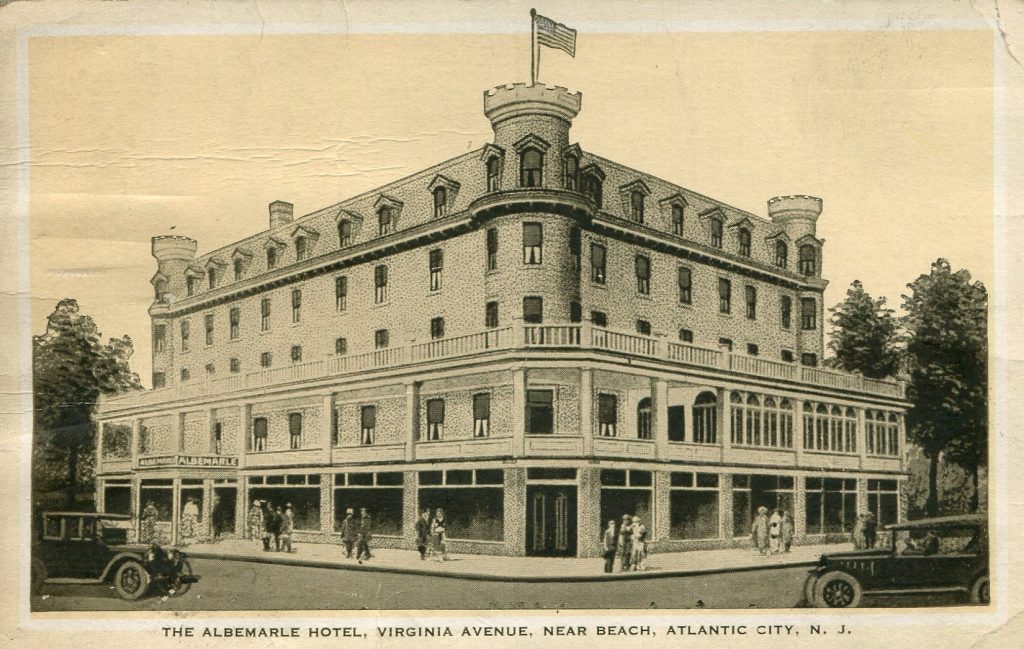 The Albemarle Hotel of Atlantic City, New Jersey, was built by Walter Zimmerman in 1892 at Virginia and Pacific Avenues. Originally, the site had been home to the Tremont House, a small boarding house, which Zimmerman had razed to replace with his 92-room structure. Due to the Albemarle’s proximity to Steel Pier, many performers stayed there. The Albemarle was condemned and torn down in 1970. 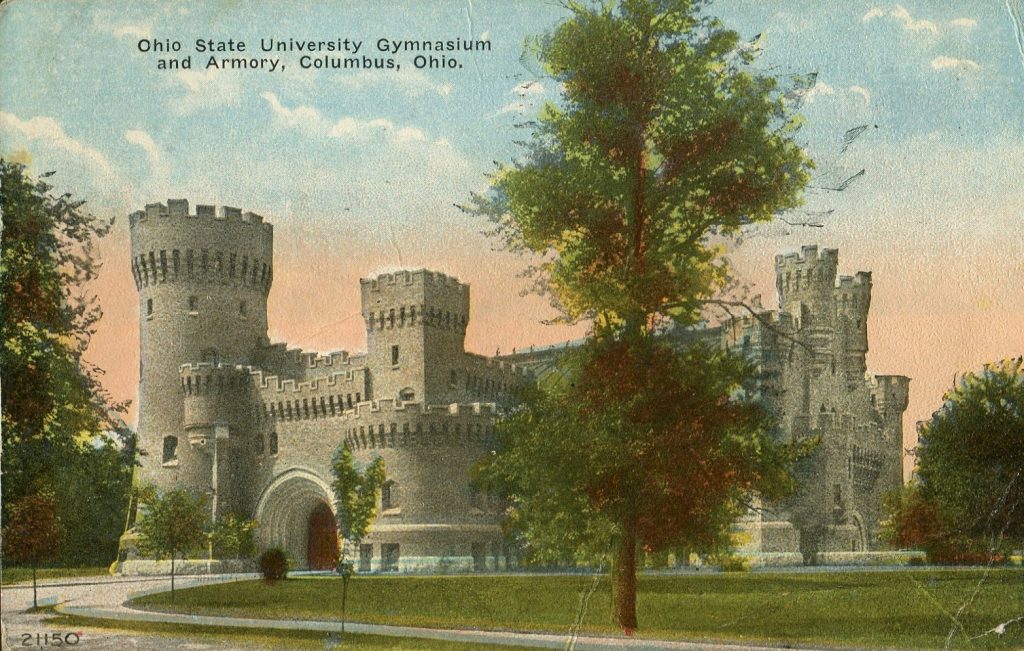 The Ohio State University’s Armory and Gymnasium, built in 1898. The Armory was a multipurpose facility used by the military science department and the men’s and women’s physical education department. On May 17, 1958, the Armory was severely damaged by a fire, and in 1959 the building was demolished.

Other American university and civic buildings with crenelated towers include: 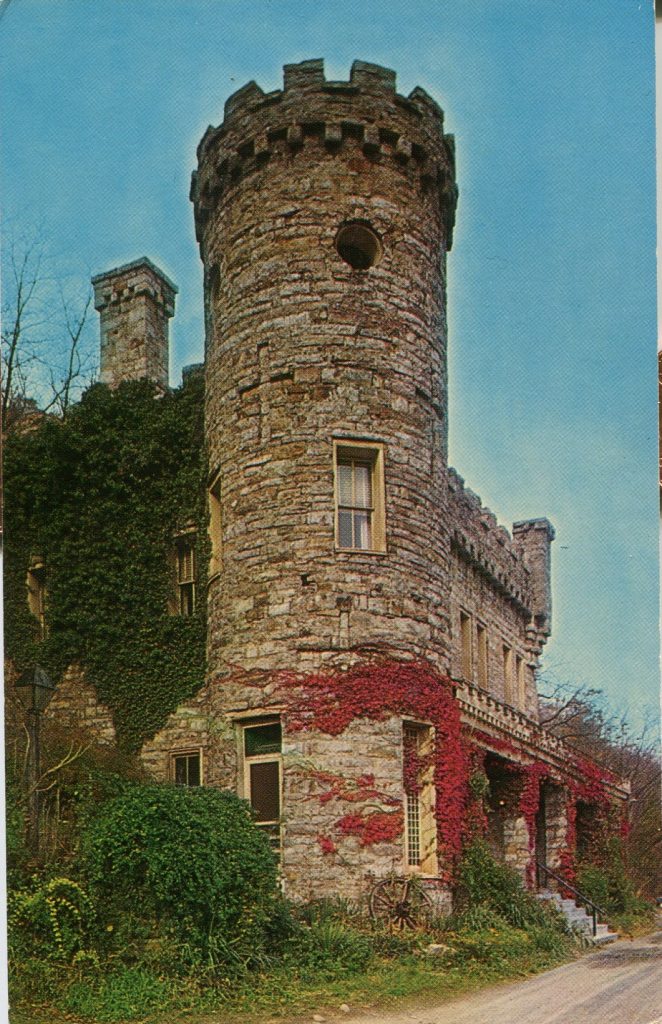 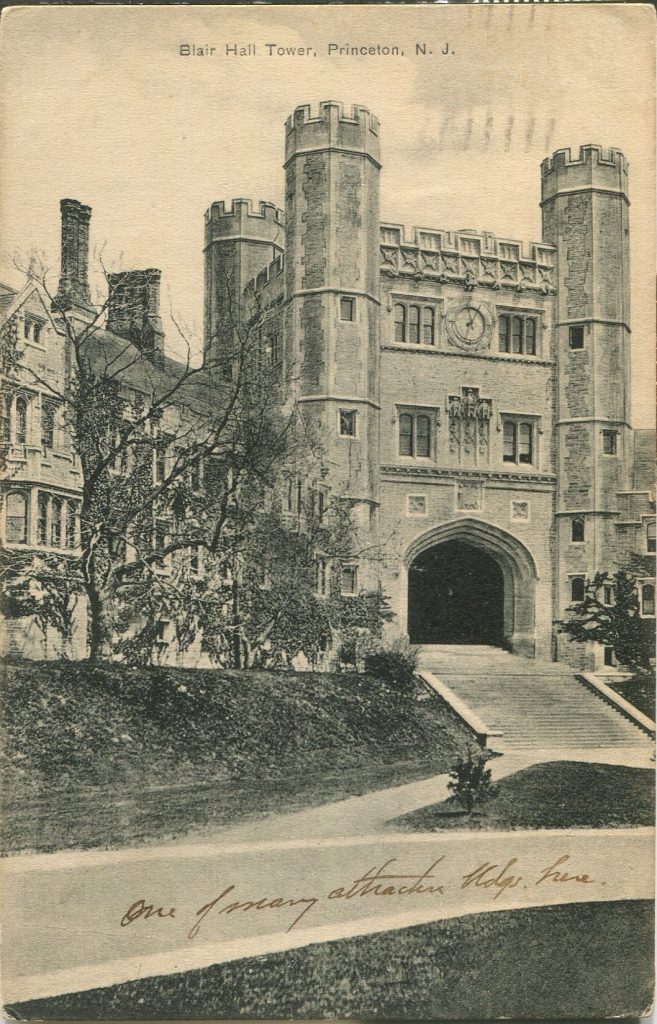 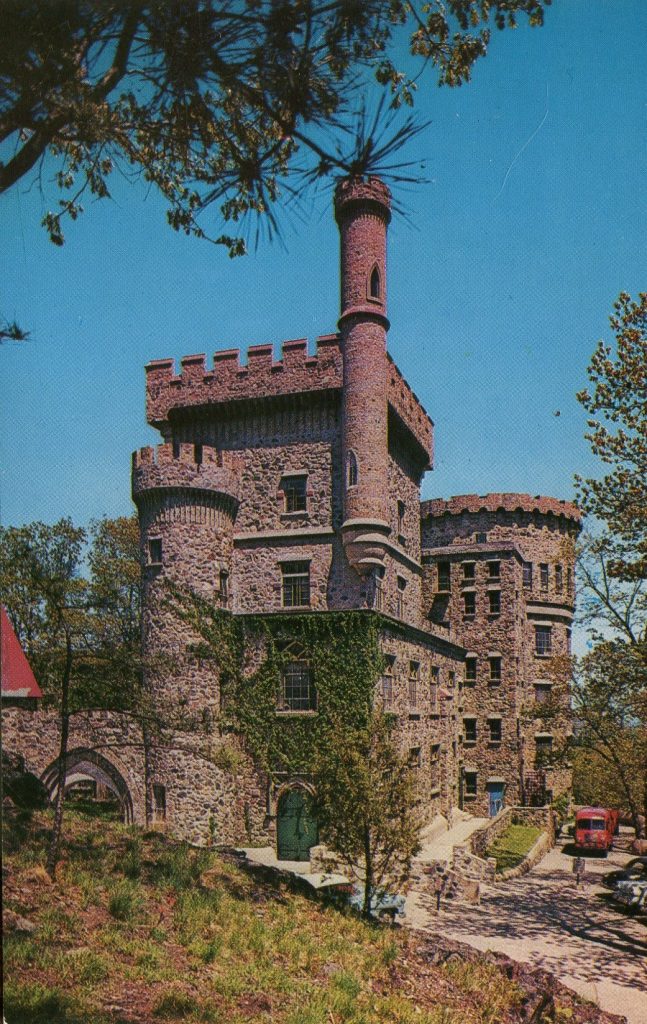 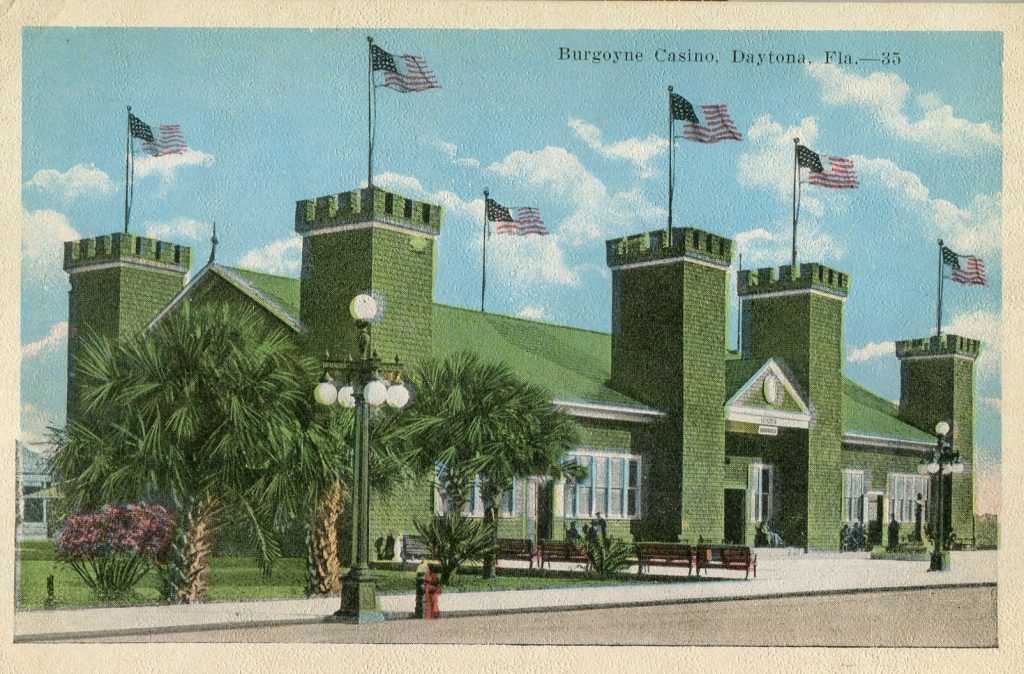 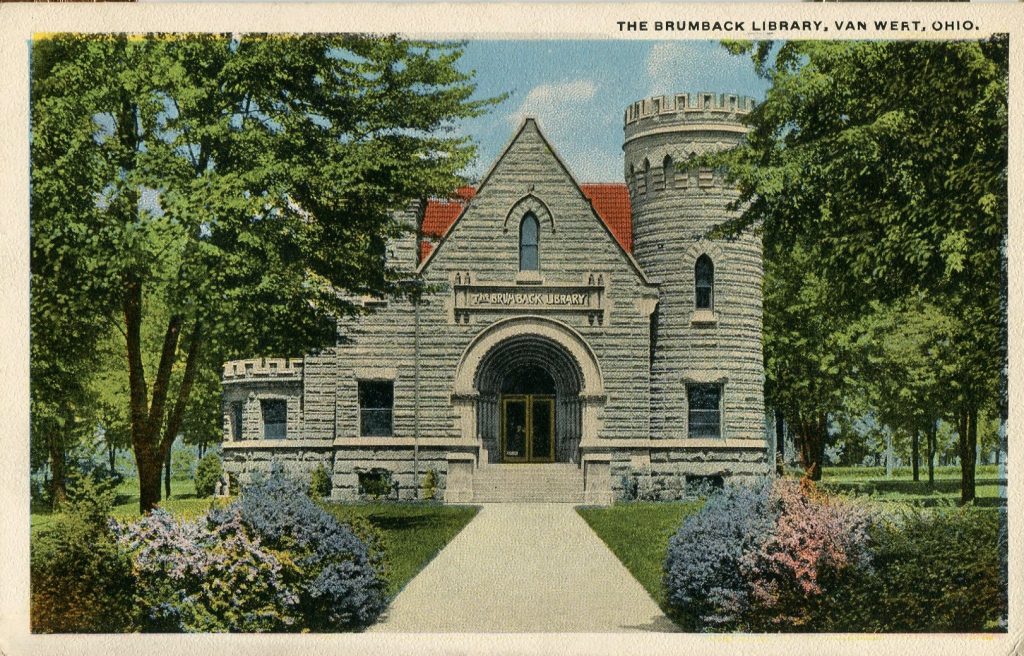 Circa 1914, Charles Burgoyne had the Casino Burgoyne, a music hall, erected at the south end of the beach Esplanade. He later donated both to the city.

The John Sanford Brumback Library of Van Wert, Ohio, (77 miles south-west of Toledo) along with five other community libraries were formed into the first county library system in the United States. Part of America’s cultural legacy, the library still serves the residents of the county as it did when it opened in July 1899. 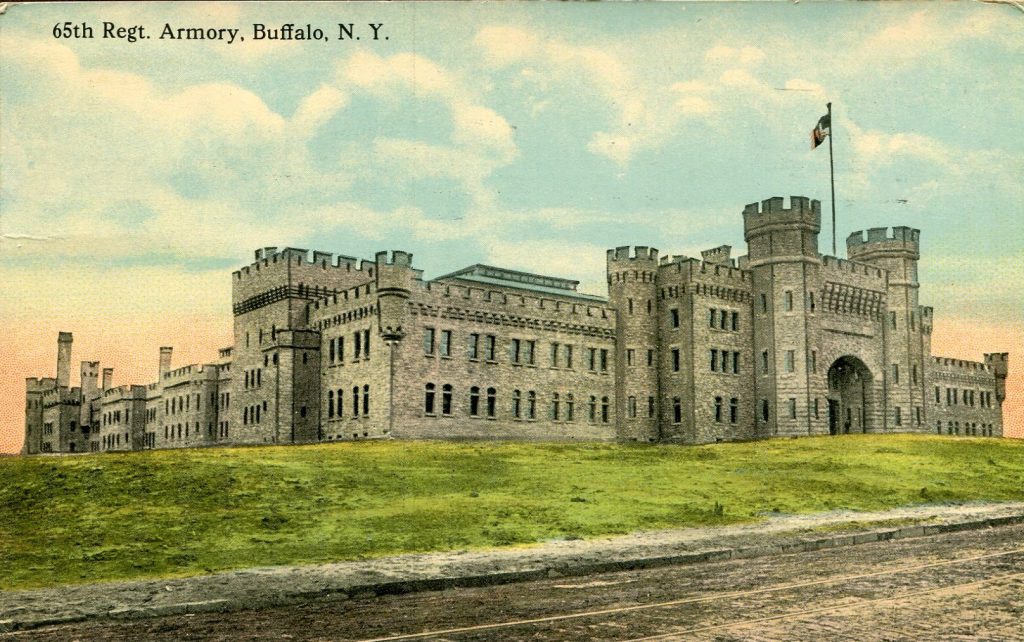 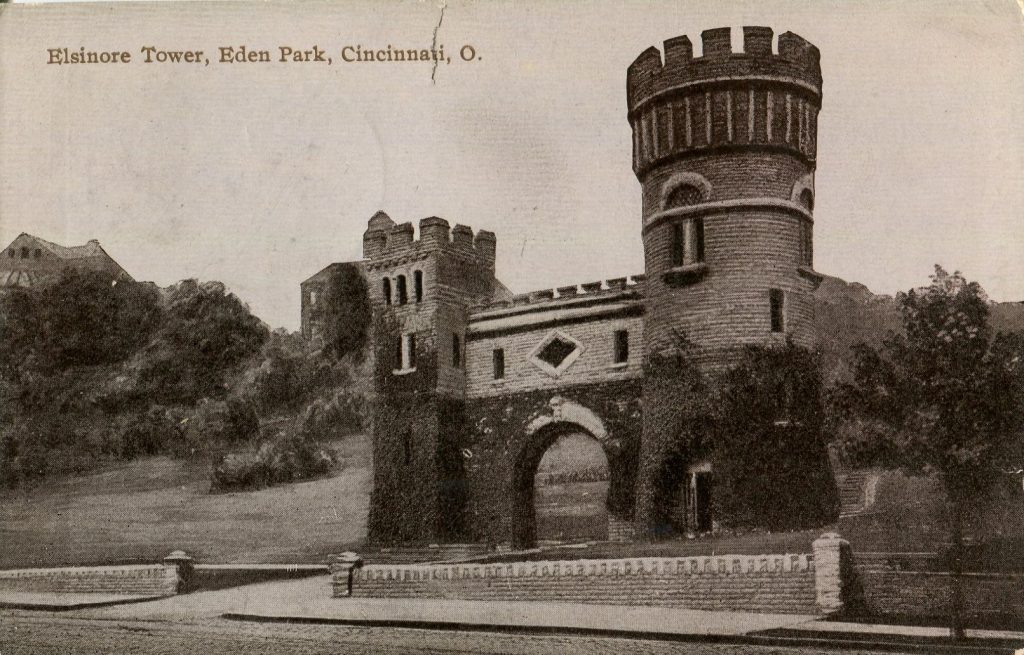 The 65th Regimental Armory (the first Masten Avenue armory) was constructed in 1902 as a repository of materiel needed for the protection of Great Lakes shipping. A fire in 1931, often considered the worst in Buffalo’s history, destroyed the armory, several homes, and a church within the community. The armory was rebuilt on the same site in 1933. The second building, far less ornate and of brick, still stands and has functioned as the home of a U. S. Army medical unit, the 105th Military Police Company, and an army recruiting center.

The Elsinore Tower in Cincinnati, at Gilbert Avenue and Elsinore Place was constructed in 1883 for the Cincinnati Water Works.

Dr. Dancer is joining Postcard History as a pictorial tour guide. Nate has been collecting postcards for four decades and has amassed a vast collection and stores of knowledge on his favorite topic - public architecture. He recently became a pensioner. He and his wife live in north Scotland with their precious cat named Sage.
PrevPreviousCharles Charlesworth
NextA House on Hancock StreetNext
5 Comments
Oldest
Newest Most Voted
Inline Feedbacks
View all comments
ilene kayne

always looking for a new category. Now to look thru my cards and find all of these. Thank you

My mother in law pointed out a crenelated stone wall as we drove down into the canyon where Bandelier National Monument is located, on an off road you take on your way to Los Alamos, New Mexico. I love using this term, and always think of her fondly.

I’ve been through Van Wert several times, but never knew of its place in library history.

Vassar College Library is also a “castle” with crenelated towers. Impressive architecture is very important for recruiting students. In her autobiography, Brooke Shields explained that she chose to attend Princeton over Vassar because Princeton’s library had “more realistic gargoyles.” 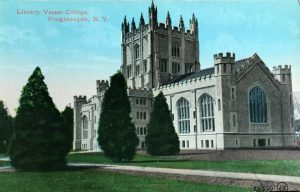 Violet.
Thank you for sharing this fabulous postcard of Vassar College Library. Readers, take note!
Click on the image to enlarge.