It is always a pleasure when I find the answer to a postcard question in my email inbox. Such was the case last Saturday when I found an email from one of our readers with an explanation of the Norris Noal card in the Odds and Ends, Part 1, that appeared on September 26, 2021.

If you are a regular reader, you may remember the card.

The email enlightened me to the origin and the existence of a set of cards published by Whitney Publishing Company.  Sumner Whitney opened a stationary store in the early 1800s at 218 Main Street in Worcester, Massachusetts. He sold handmade Valentine greetings. Sumner died in 1861, but his brother Edward continued the business. Two years later George C. Whitney joined Edward. (A quick search of United States federal census data suggests the George was Edward’s nephew.)

By the end of the 1880s Whitney had acquired most of the local competition and they became the only area publisher of holiday cards.

When postcards became popular, Whitney shifted their focus to postcard greetings, and they enjoyed great success until a 1910 fire destroyed the business. George rebuilt but lived only three years after opening the new facility. His son Warren took over (circa 1915) and successfully branched-out to Chicago, New York, and Boston. World War II shortages forced the business to fold in 1942.

Thank you, Ray Steinnerd for your email.

The Story of the Lorelei appeared in Postcard History on February 15, 2021. There were eight postcards with the text, all of which were foreign – one from a French publisher, two Austrian and five German. Just a month or two after the article was published a friend emailed that he had a Lorelei card that he wanted to give me. I accepted.

The caption appears in the lower-left corner and a poem entitled Die Loreley appears above the message space on the address side. But the different spelling is not the only difference.

The Rhine River rises in the eastern Alps of Switzerland. The river is the Swiss border with Liechtenstein and is also part of the Swiss border with Austria, Germany, and France. The river flows north to a delta on the edge of the North Sea. It is not a unique characteristic for rivers in the northern hemisphere to flow north, the Nile, the world’s longest river is one, the Lena in Russia is another, and so are the Athabasca in Canada and the St. Johns River in Florida.

What makes north-flowing rivers interesting to water enthusiasts is that the flow usually determines the direction of commerce in nearly 90% of all river business. I have only one postcard friend who can speak with authority, but he claims that as much as 85% of all his river postcards show images looking downstream.

My new card is an artist’s rendering of the Lorelei looking upstream.

In the December 14, 2020, issue of Postcard History, our friend and frequent contributor, Eleanor “Ellie” McCrackin presented a piece devoted to the history of the silhouette and silhouette artists from the early 20th century.

The postcards with the article were varied and each conformed to our understanding of silhouettes as we know them. Recently Ellie sent your editor an email with six attachments. The message was short and to-the-point, “I wish I had found these before writing my silhouette article.”

For those interested in this strange but amusing art form, we present all six designs from the British publisher, Birn Brothers, Ltd., 67 Bunhill Row, London, England.

The set, entitled and numbered: B. B. London Series No. 2107 Printed in Germany, may well be from a production era just prior to the First World War. The main characters on each card are the couple who are much enamored with one another and their umbrella. The artist has very cleverly set the man and woman behind the umbrella in a way that they form a silhouette within a rather ordinary “rainy-day” in London scene. 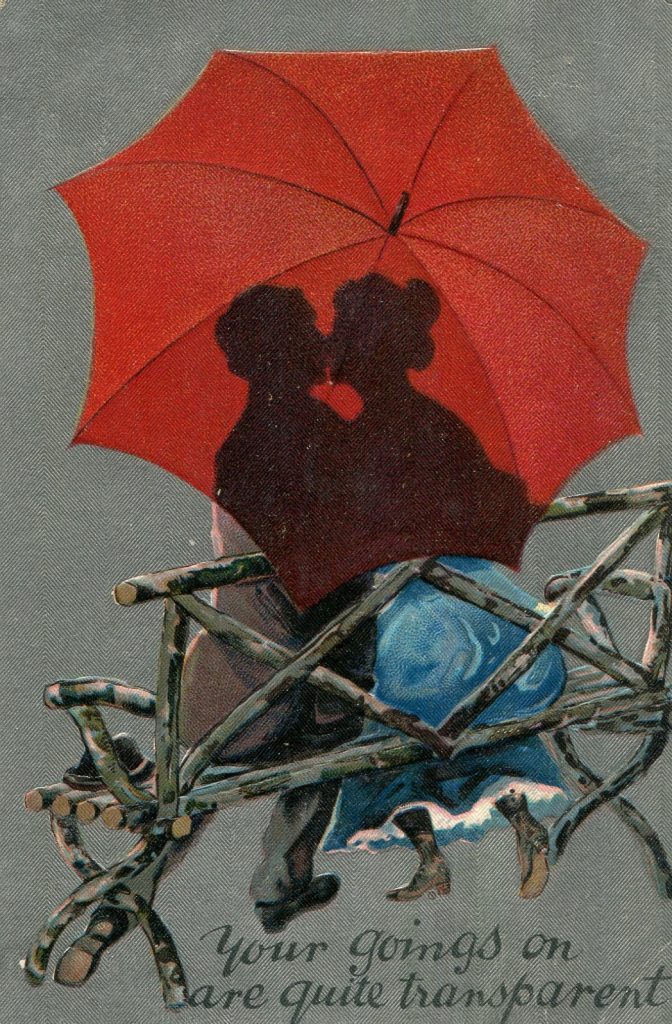 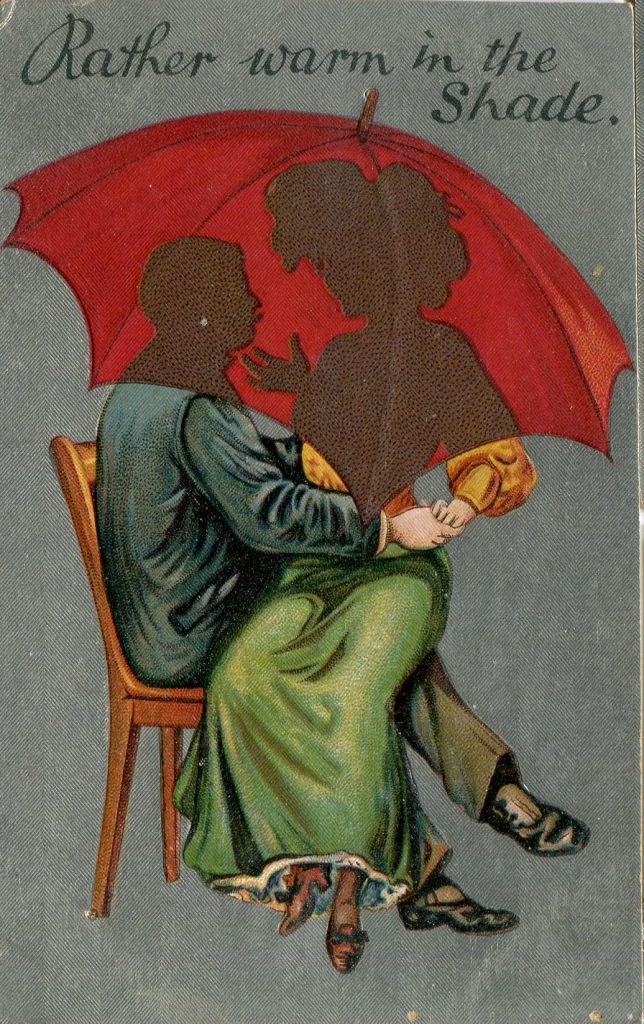 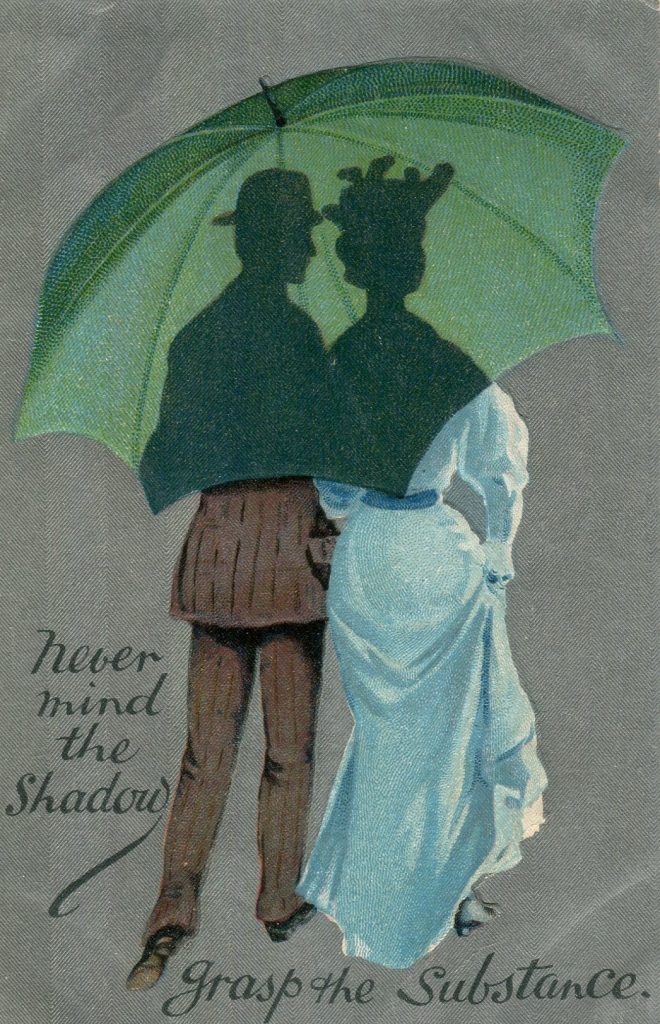 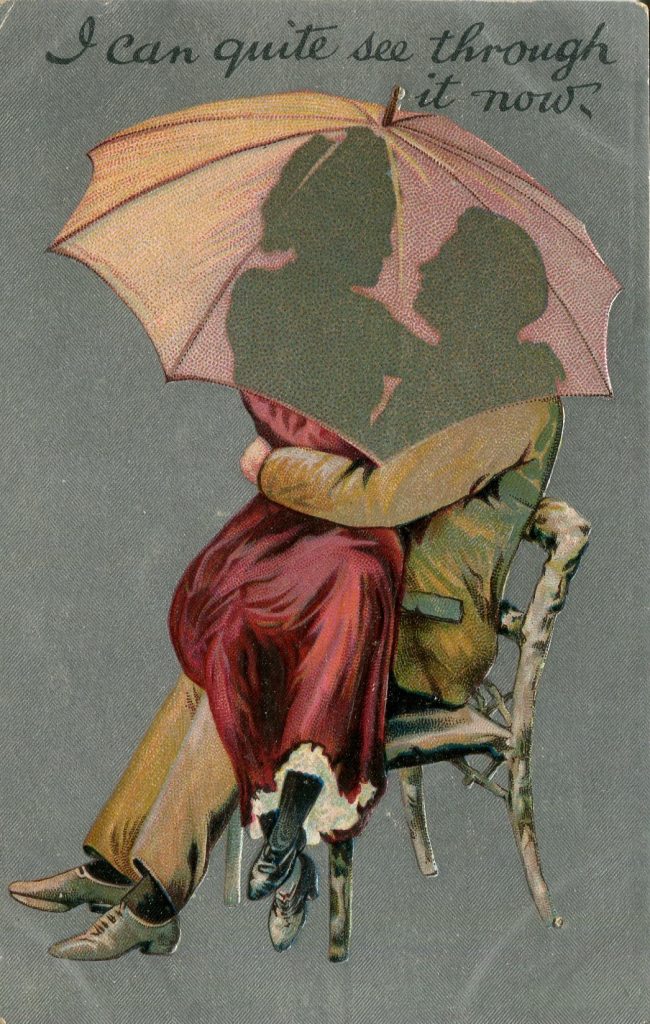 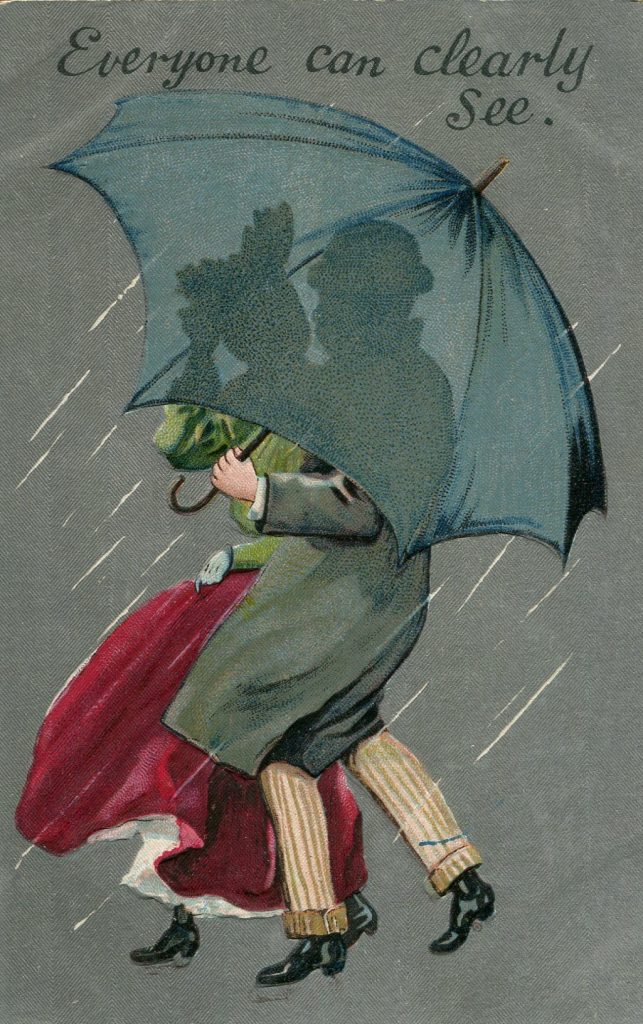 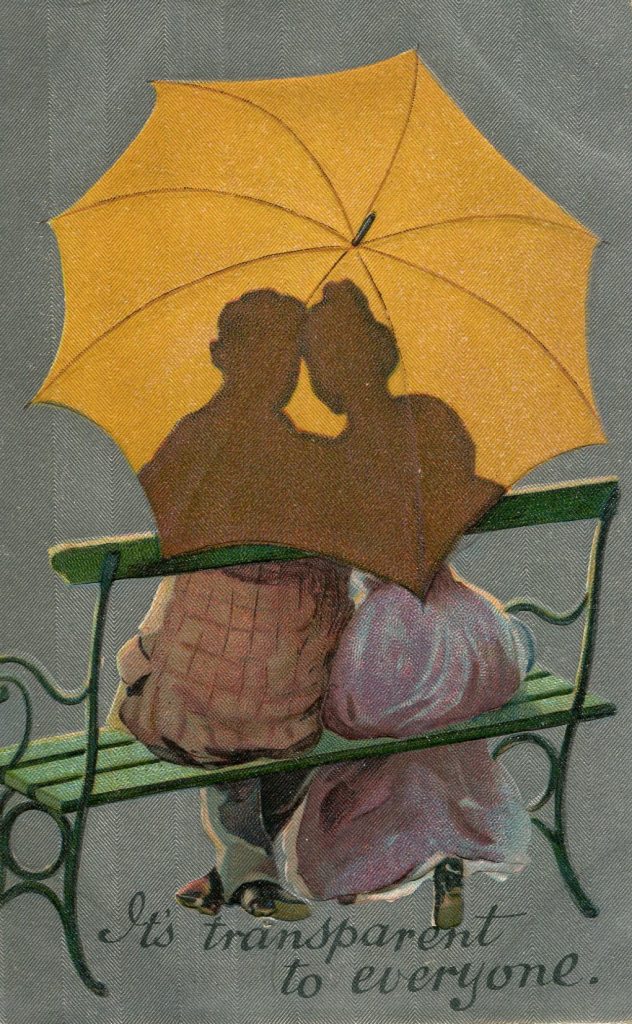 The brothers opened their business in 1905 in northeast London on Bunhill Row. From the 1860s the site had been an integral part of the warehouse district in which commodities from around the world were stored for sale and distribution. The Birn brothers operated printing presses on four floors until 1964, after which the neighborhood was transformed by luxury high-rise apartment houses that in essence redefined the area as residential.

Birn’s reputation evolved based on the high-quality paper used for their greeting cards and postcards. It was a larger operation than most. The cardstock is embossed and of medium-plus weight. The set here is a good example, although this set likely came from one of their Bavarian affiliates. Also in ordinary production, contrary to their reputation were thousands of cheap paper children’s books and young adult novels – the forerunners of what today are known as graphic novels and chapter books. 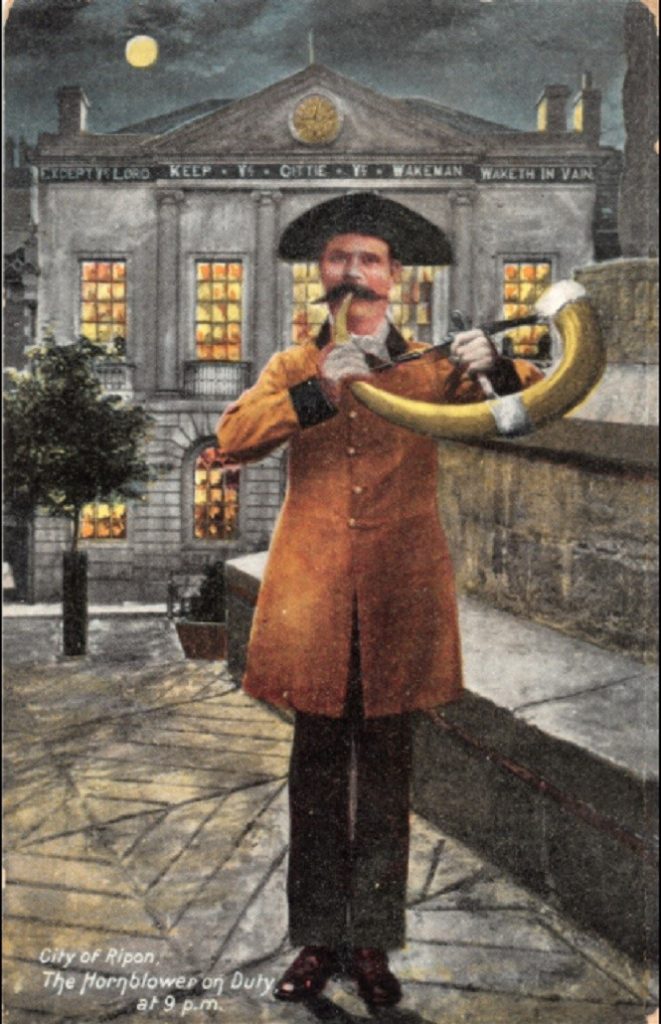 ry of the Ripon Hornblower in Postcard History’s March 25, 2021, issue.

That Postcard History lesson told of how diligently the tradition has been practiced throughout the centuries since 886 AD when King Alfred presented the City of Ripon a charter in the form of a horn.

We were lucky to learn the names of all the hornblowers from the last two centuries and how at exactly 9 PM each evening they performed their righteous duty for the citizens of Ripon, England.

The presentation was flawless, but there was one omission – unavoidable at the time. Last march no one in our regular circle of contributors had a nighttime view of the hornblower at work. Today we do!

The newly found card is a Parker’s Copyright Series of Ripon, the caption reads: City of Ripon. The Hornblower on Duty – at 9 p.m.

The Staff of Postcard History offers this article for your enjoyment. It is a combined effort of many: our publisher, editor, webmaster and collectors/contributors far and wide. Please use the COMMENTS feature below to let us know how we're doing.
PrevPreviousDating Dexter Press Postcards
NextBob PetleyNext
2 Comments
Oldest
Newest Most Voted
Inline Feedbacks
View all comments
Bob Kozak

The Norris Noal, Spencer Spender, and similar cards are examples of vinegar valentines, which were produced by numerous publishers during the early twentieth century.