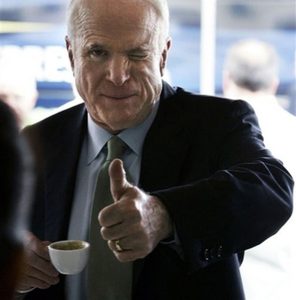 “Hand gestures are much in the news these days,” so stated an NBC News reporter in 2008 when then Republican presidential candidate, Senator John McCain, gives a thumbs-up as he drinks a coffee at Cafe Versailles on May 20 in Miami.

The report continued, “The thumbs-up gesture has its roots in ancient Rome, where gladiators would literally live or die by it. Pollice verso is the Latin term for the gesture, meaning “with a turned thumb.”

The gesture was used by the audiences in the coliseum to express their approval of performances by the gladiators. Sociologists have studied gestures for generations since a gesture is one of only a few non-verbal forms of communication. For obvious reasons the gesture needs a universal understanding. In the case of the thumbs-up it could determine if someone should live or die.

Looking back to the 1940s and later, when it became commonplace, it seems that the Naval and Army Air Corps pilots were among the first to give a thumbs-up a fresher meaning. In both the war theaters – the European Theater of Operations and the Pacific Theatre of Operations – pilots were flying their fixed wing planes from the decks of aircraft carriers. Even though those scenes of activity were outdoors and in vast open spaces the noise was intense, making verbal communications impossible. Pilots would use a thumbs-up to indicate they were ready for take-off.

Naturally there were dozens, perhaps hundreds of other situations that required silent communications and the thumbs-up spread quickly in land-based operations in Europe and other parts of the world. A wink, a nod or the thumbs-up all work the same way, but a thumb in the air is easier to see.

In modern times a thumbs-up has a positive meaning in most English-speaking countries but it has other or dissimilar meanings in other cultures and places. In some European countries a thumbs-up is only a substitute for the number “one,” as in, “How many are there?” In many Arabic countries the thumbs-up has a negative connotation.

(And is there anyone of a certain age who has forgotten how popular the thumbs-up or down became when those gestures were used by Gene Siskel and Roger Ebert to indicate positive or negative movie reviews?)

Gestures on postcards are common, but often overlooked as a collector’s topic. Frankly I have never seen a Thumbs Up category at a postcard event. “Hands-Across-the-Sea” may be the closest. 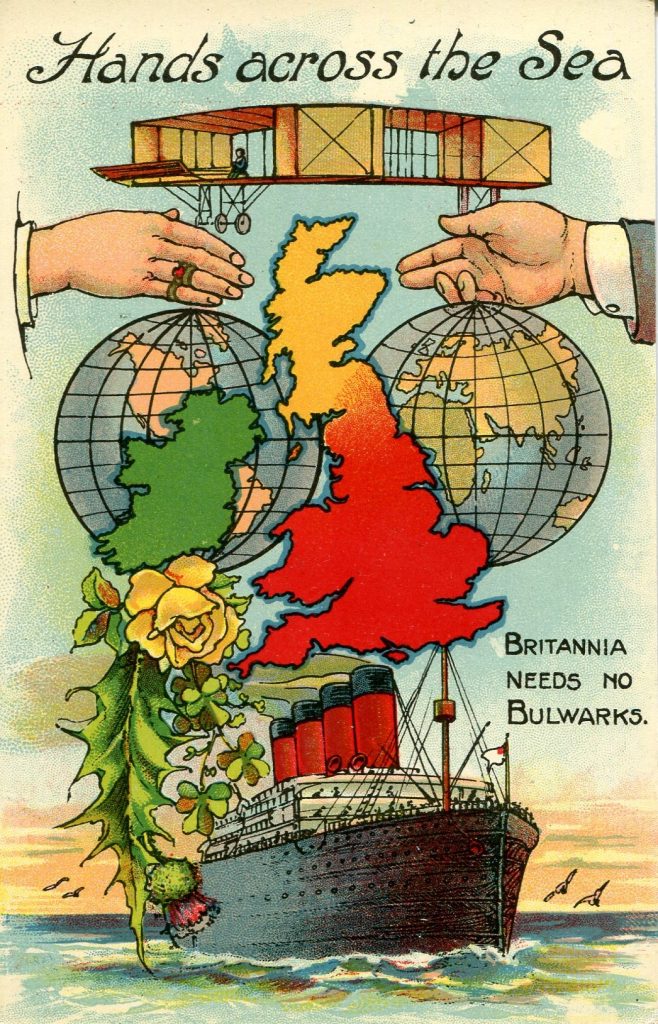 Remember, whenever you offer your hand in a greeting handshake, your thumb is up! 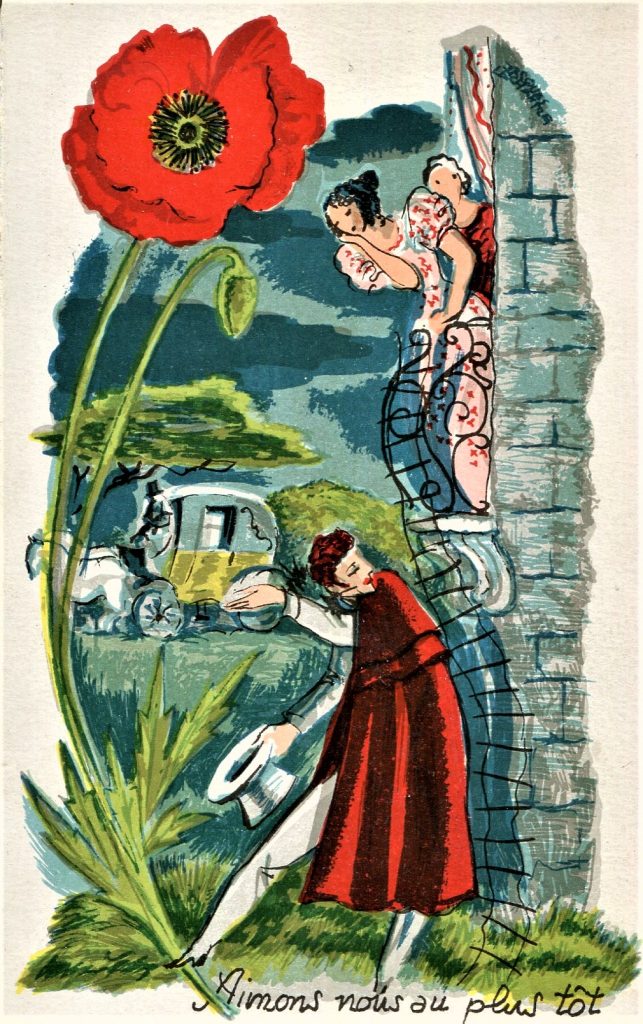 A tip of his hat and an amorous invitation could be the start of a life-long love affair. 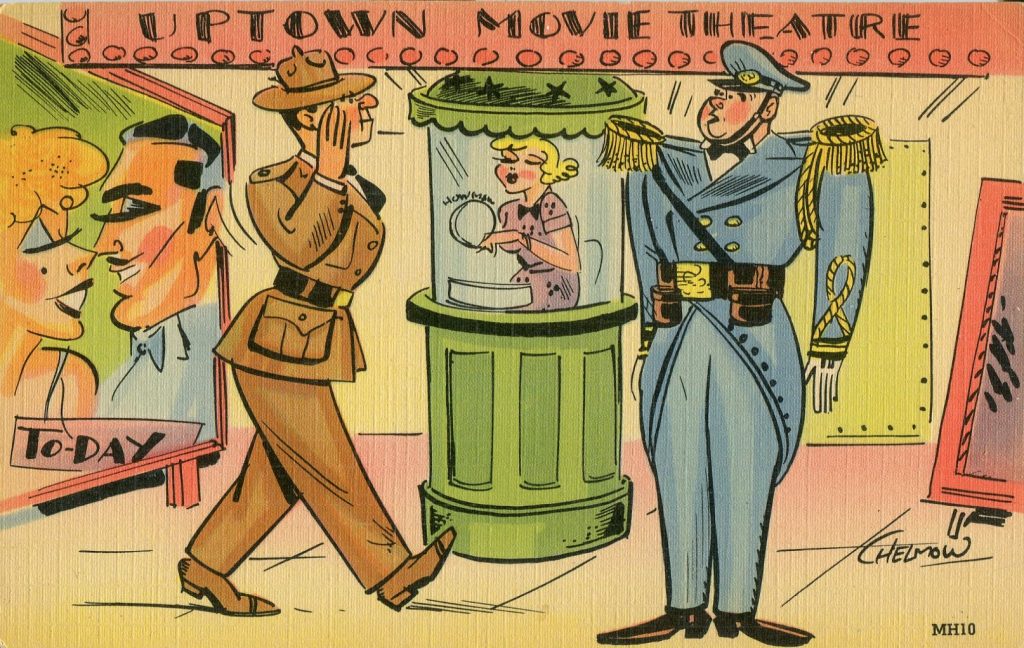 And the salute is a sign of respect, even when it’s not required.

The Thumbs Up series goes unmentioned in the Made in Chicago Museum’s website hence the information herewith is sketchy to say the least. The series of cards is comprised of at least twenty or 24 designs. There are a variety of possibilities but the most likely is that there are two sets of twelve cards; set one are horizontal cards with three designs of four cards each and set two are vertical cards with four designs of three cards each. (If any of this really matters to anyone, perhaps we should form a committee to investigate.) 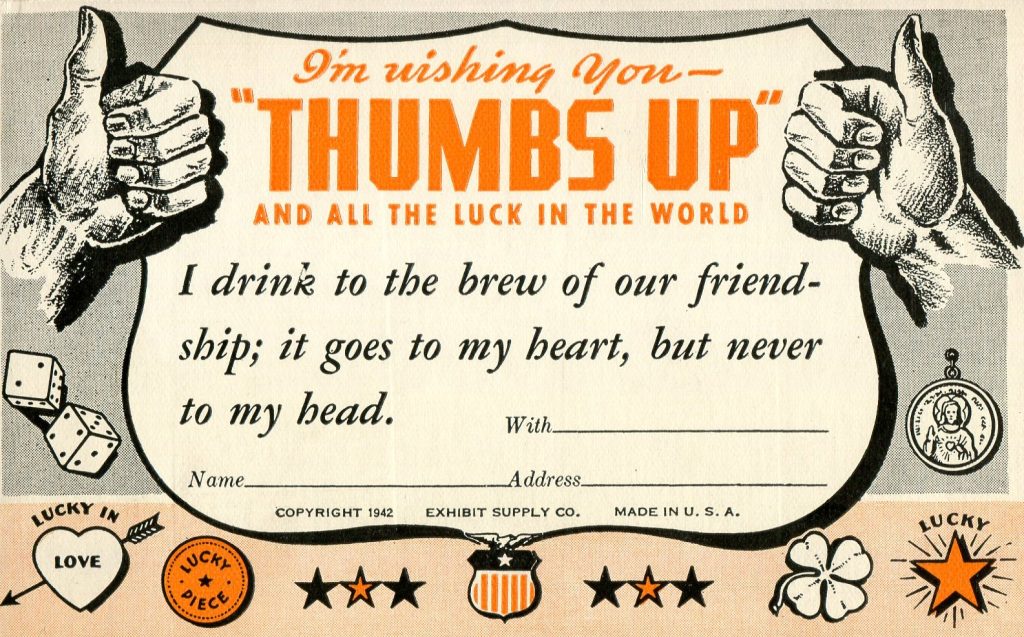 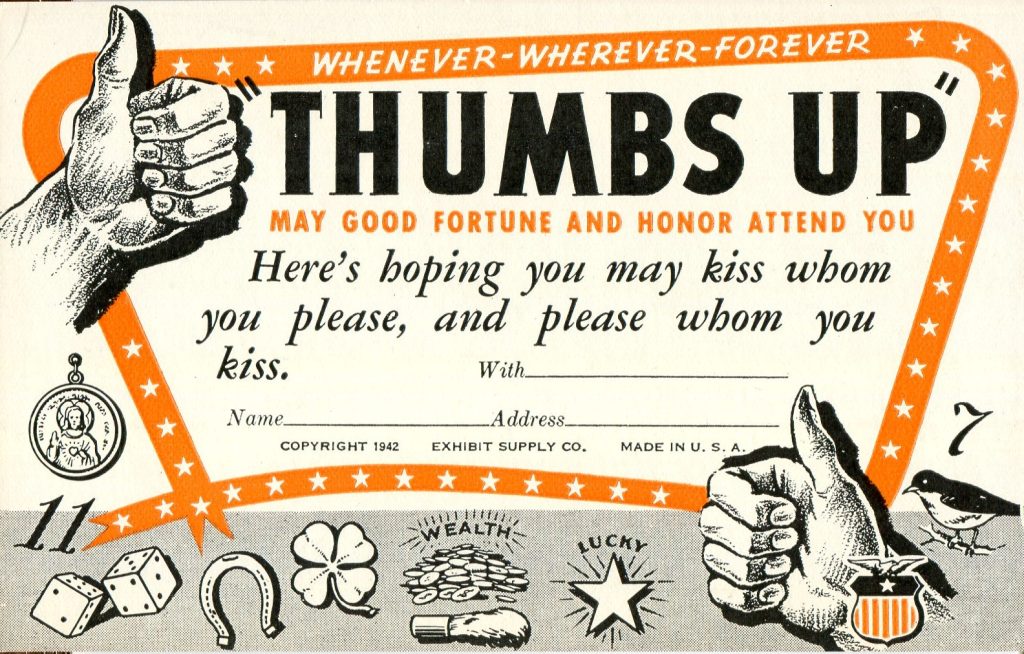 The series (or both sets) is printed on white 240# card stock in at least three shades of orange ink with black text and images. Each card features symbols of “luck” such as four-leaf clovers, dice, horseshoes, lucky stars, Saint Christopher medals, lucky coins, hearts, rabbit-foot charms, 7&11 numerals, blue-birds of happiness, and both left- and right-handed thumbs up. Additionally, each card has an esoteric slogan or adage, some of which make sense and some don’t. All have a ©1942 citation. 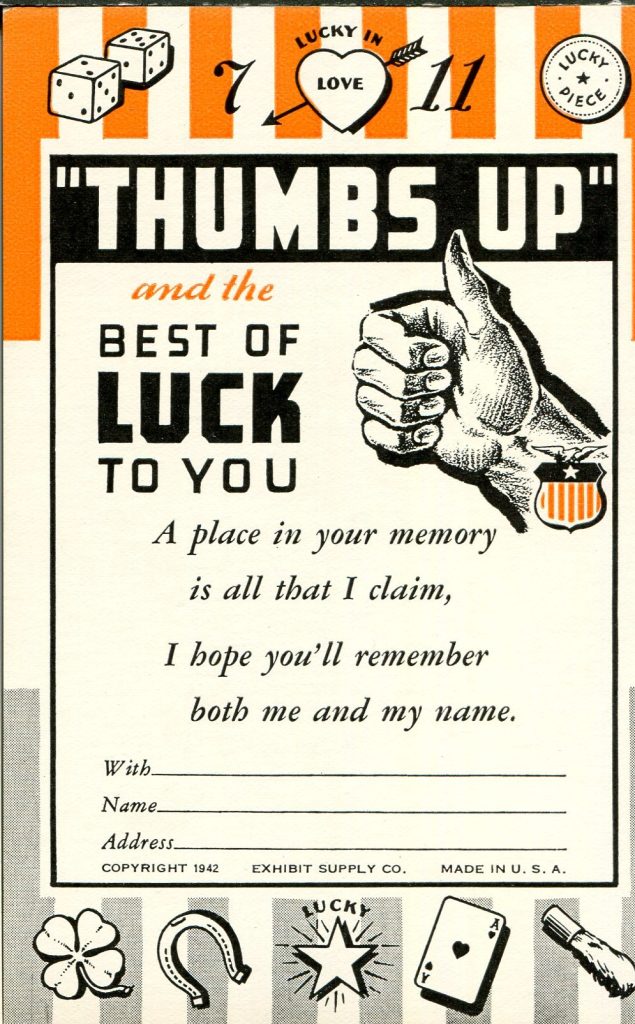 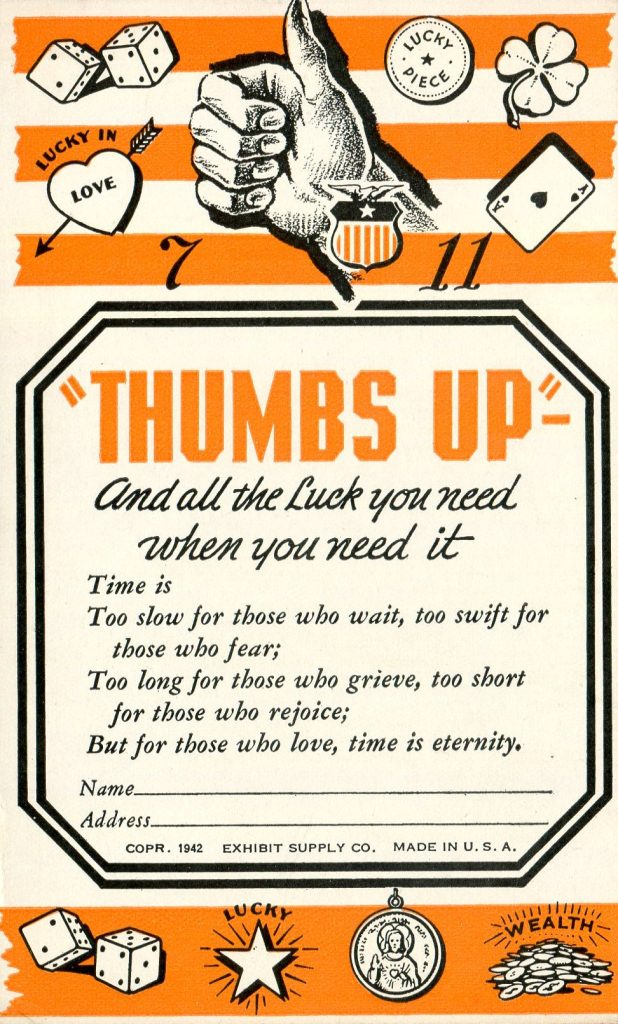 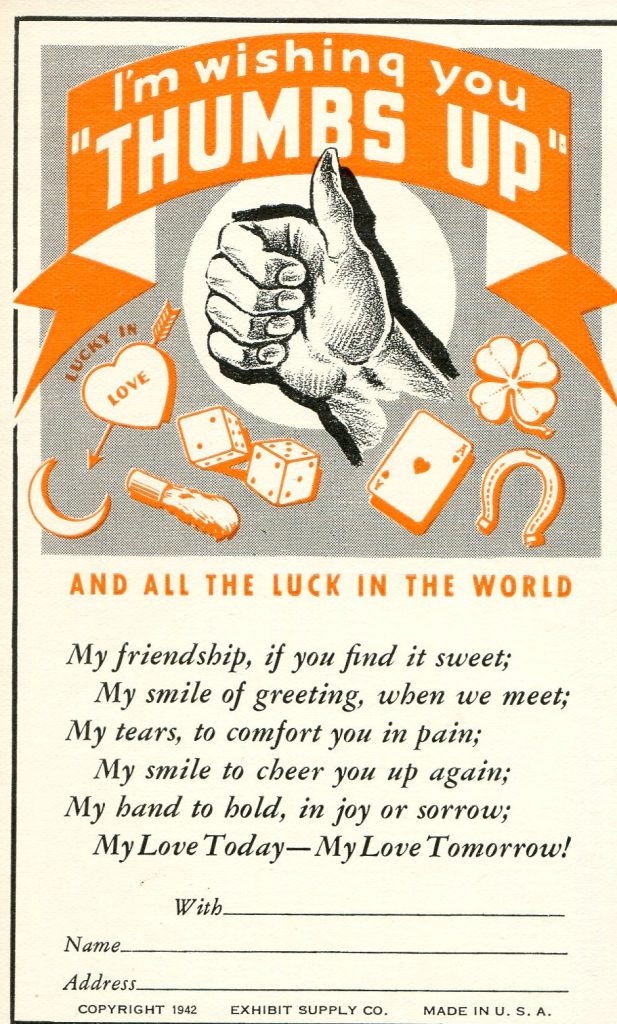 So here’s a heart-felt thumbs up from Postcard History Online Magazine. May all your days be THUMBS UP days.

Ray Hahn is a retired educator, but he has never stopped teaching. His decades of researching, writing and editing a newsletter for the South Jersey Postcard Club has been a world-class education in trivia. In addition to postcard collecting, Ray’s other interests include history, genealogy, and touring the world with his wife Marie. Ray often advises his readers to "Join me as we explore the world one postcard at a time." Ray and Marie live in New Jersey.
PrevPreviousThe Curse that Rocks the Petrified Forest
NextCome and Join UsNext
3 Comments
Oldest
Newest Most Voted
Inline Feedbacks
View all comments
irene herz

what an interesting article. Seems to me I’ve seen pilots give the thumbs up in old movies.

I’d like to have the “Hands Across The Sea” card, the Uptown Movie Theatre comic, and the Exhibit Supply Company ad.

I’m wondering about the card with red poppy and whether I’m right about the occupation of the “gentleman?? ) and his possible offer ? It looks like a slur against both sides and more to me.