The University of North Carolina, at Chapel Hill was the nation’s first state university and the only U. S. university to offer degrees in the 18th century. The university was authorized by the North Carolina constitution in 1776 and chartered by the General Assembly in 1789, the year George Washington was inaugurated. UNC opened for students on January 15, 1795. The first student arrived February 12 and by mid-March the school had two professors and forty-one students.

This card, Greetings from Chapel Hill shows many of the campus facilities today. The first building and indeed, the only building for two years, was a two-story brick structure called Old East. It is now a National Historic Landmark, and is the oldest state university building in America. It was where the first students reported.

This 1923 artist’s rendering of the Old East building is how it looked then. The building still stands today.

Another building of significance is the Playmakers Theatre. Built in 1851 and designed by Architect Alexander Jackson Davis to resemble a Greek temple, it was dedicated as Smith Hall after UNC’s first donor, Benjamin Smith.

The Playmakers Theatre also stands today as a national landmark building.  Over the years, this building has been used as a library, ballroom, law school, chemistry laboratory, and bath house.

When occupied by Union forces during the Civil War, the building was used as a stable for Michigan soldiers’ horses. It has been noted ever since then that, “Michigan horses have been noted for courtesy and intelligence and Carolina students for their horse sense.”  In 1993, the United States Postal Service issued a postal card honoring the University’s Bicentennial with this building pictured on it.

Prior to 1881, the school managed on student fees, gifts, escheats, and other minor sources of income. In 1881, after nearly a century of precarious existence, the university received the first state support.

During the early years teachers were trained here, but it was not until 1885 that UNC developed a teachers’ training program. In 1894, a law school was incorporated into the university. By the end of the century 512 students were enrolled and the faculty numbered thirty-five. 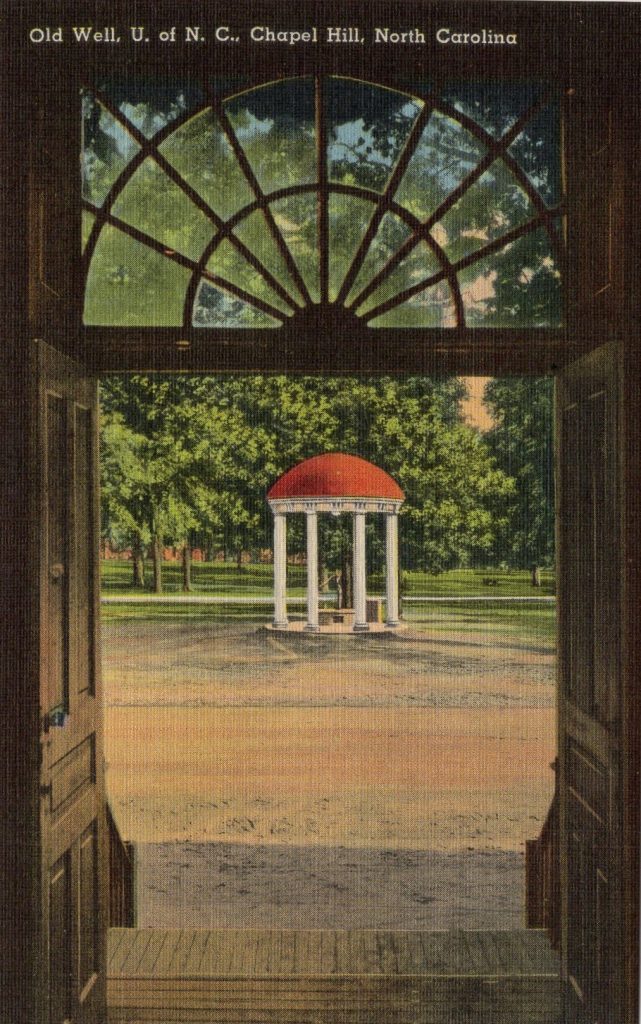 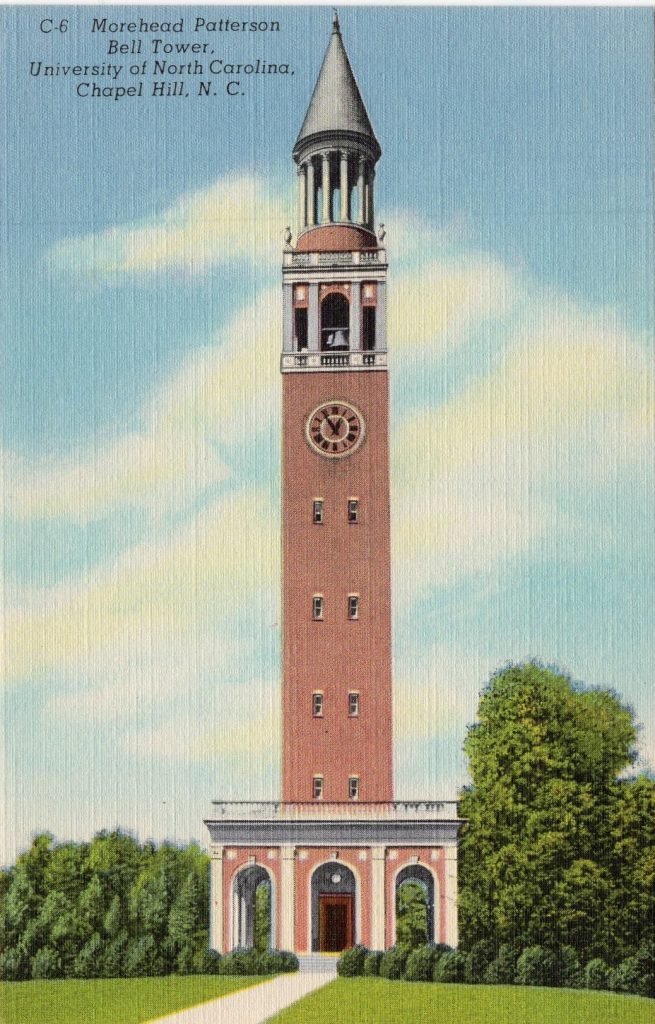 Like most college campuses, UNC has its unique shrine. Located in the middle of the campus is the Old Well.  The well was the only source of water during the early years of the school. Today, it is a place of great pride. [It is hard to imagine that a UNC student ever left the campus without a picture of him/herself at the Old Well.]

The well’s covering is a neoclassical structure placed there in 1897 by then President Edwin Alderman as part of a campus beautification program. The rotunda is modeled after the Temple of Love in Versailles.

The Louis Round Wilson Library was completed in 1929 and served as the main library until 1984. It is now the center for special collections such as rare books and the university’s archives.

The Morehead Planetarium and Space Center has a unique distinction. It has been used as a training center for Gemini and Apollo astronauts in celestial navigation. Like the Bell Tower funding was provided by John Motley Morehead III, an UNC alumni.

It may be safe to assume that every sports enthusiast knows UNC-Chapel Hill well.  They either like the Tar Heels or hate them.

Through the years they have won over 45 NCAA team championships. The men’s basketball team has won 48 ACC championships. UNC also fields a fine football team. Even without the championships everyone knows Rameses, a Dorset Ram that serves as the UNC mascot.

There are 30,100 students and almost four thousand faculty.

Chapel Hill is located in a north-central part of North Carolina. Along with Durham and Raleigh, the state capital, the three cities make up a region known as the Research Triangle. It is what the census bureau calls a combined statistical area; there is a combined population of nearly two million residents.

Tony Crumbley has been a collector of stamps and postal history since childhood. He has authored numerous articles over his career as a philatelist. He is the current Co-Editor of the North Carolina Postal History Journal, a job he has had for over 25 years. He is a General in the Civil War Philatelic Society where he served as president. He lives with his wife, Renea, in Charlotte, North Carolina, and is the retired Vice President of Research for the Charlotte Chamber of Commerce.
PrevPreviousTemperance
NextThe Curse that Rocks the Petrified ForestNext
1 Comment
Oldest
Newest Most Voted
Inline Feedbacks
View all comments
Bob Kozak