We Can Take It!

postcards at home in the CCC
and away in the U.S. Army

On March 4, 1933, a new President was inaugurated. On March 9 a new Congress met, and on the same day a group of seven men, including the President, held an important meeting in the White House.

The new President had been elected in November. Things had not been going well with the country, and, in the preceding campaign, he had said much about the existing widespread unemployment and about “the forgotten man.” He had proposed a “new deal.”

It was at the White House, March 9, between four o’clock in the afternoon and ten o’clock at night, that the Civilian Conservation Corps was given its swaddling clothes and began its toddling steps.

The quote above is from We Can Take It, the opening lines of a short story of the CCC by Ray Hoyt [New York: American Book Company, ©1935].  A recent review of a December 1999 reprinting reads:

We Can Take It, first published in 1935, is an early history of the Civilian Conservation Corps. The CCC, considered one of President Franklin D. Roosevelt’s most successful New Deal programs, operated from 1933 to 1942 and provided natural resource-related work for young men, ages 18-25, during the Great Depression. In the program’s nine years, 3 million young men participated in the CCC. In return for their work, the men received training in a variety of skills, living quarters, clothing, and food, and a small wage of $30 a month ($25 of which had to be sent home to their families). The accomplishments of the CCC remain evident today in the nation’s national forests, parks, roads and trails. Included are 10 pages of pen and ink illustrations.

In the simplest vernacular, Postcard History Online Magazine is mostly in the history business. Examples of the work accomplished by the CCC in their first eighteen months include, the installation and maintance of nearly 60,000 miles of telephone line, they built 797 fire lookout towers, and constructed more than 15,000 multi-purpose national park service buildings. Those envolved in the talley of all these facts are historians, economists, statisticians and a host of others, but … it also takes an artist. Please read the last line of the review again, it says,“Included are 10 pages of pen and ink illustration.”

The reviewer is foresightful to the extent that he has voiced a concern over a story that is not complete without illustrations. The illustrator in this case was a young artist named Marshall Davis.

The story of Marshall Davis is incomplete. There are a  few research irons-in-the-fire, but responses to queries have been slow to arrive. His personal history has been difficult to discover, but we do know that after Davis completed his work for the CCC he continued to serve his country as a military artist/historian.

How the art of Marshall Davis appears in the postcard world is in a set of twenty (or 21 or 22) postcards that portray military life from a truly personal viewpoint. There are at least 24 (25?) different images that appear in two different printings – one by the Printline Company of New York, at 22 W. 22nd Street and a second that seem to be self-published by the artist under the name M. Davis, 4th floor, at 15 East 22nd ST. N. Y. C.

The following illustrated checklist of Marshall Davis postcards printed by the Printline Company is presented with help from Postcard History’s friend in Wichita, Hal Ottaway. 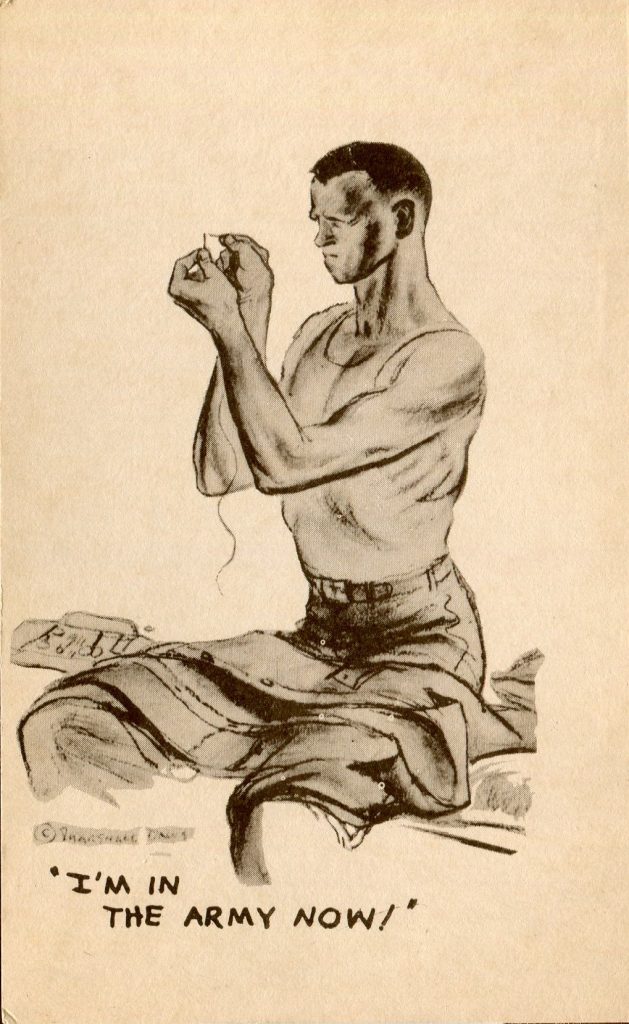 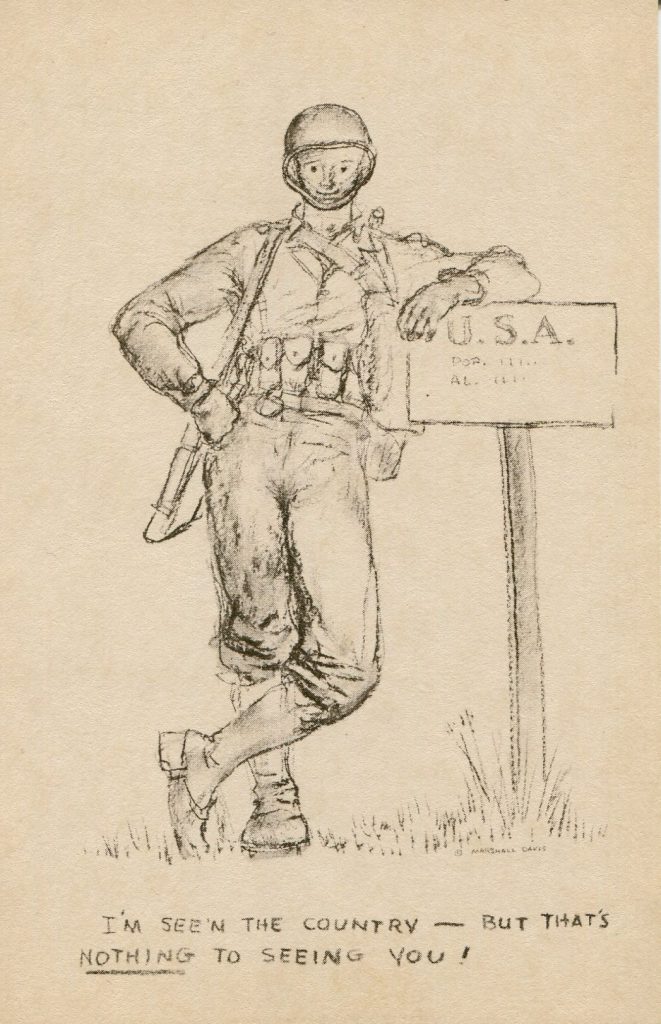 r 12. JUST BUCK’N UP FOR ANOTHER INSPECTION

r 13. KINGS OF THE BROAD HIGHWAY 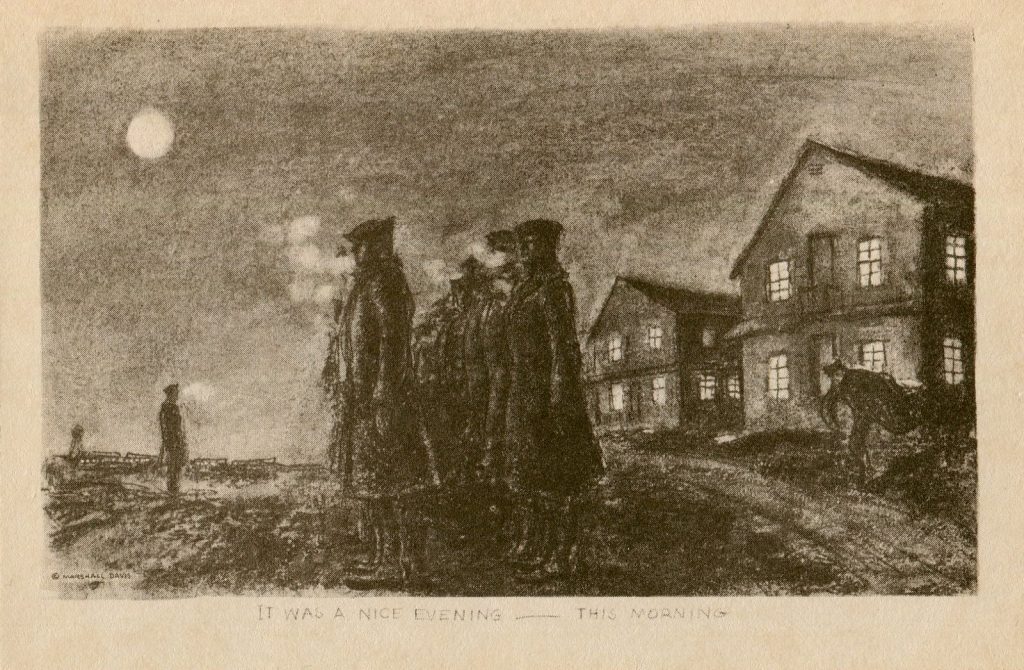 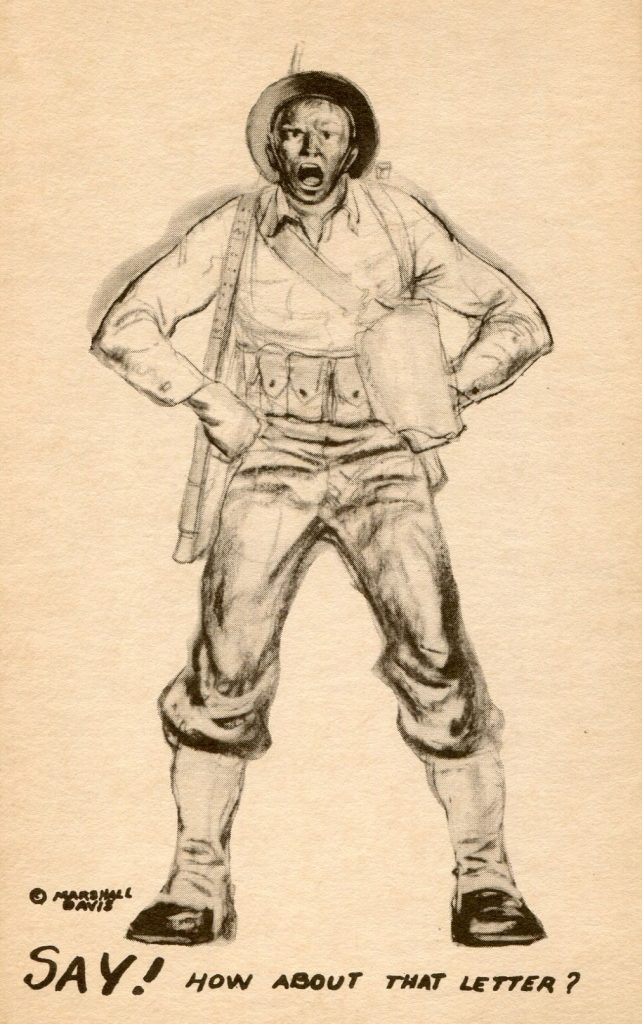 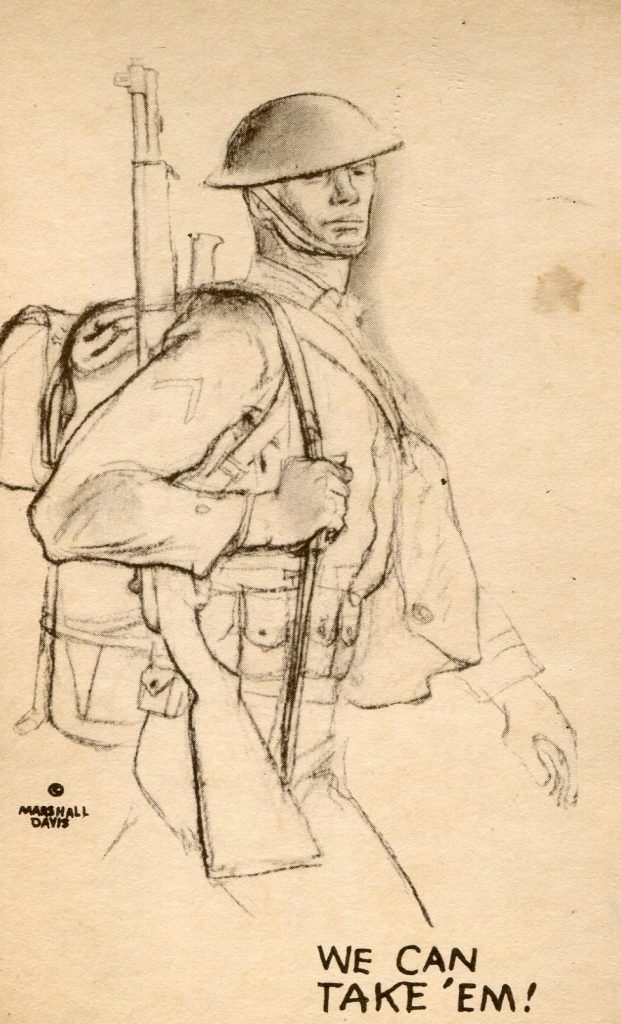 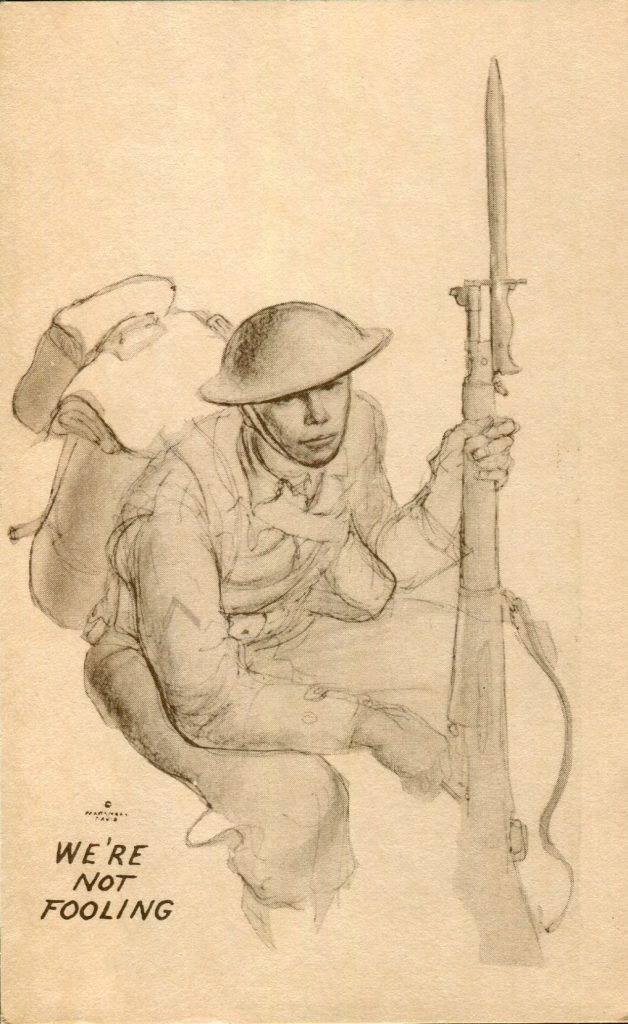 The Staff of Postcard History offers this article for your enjoyment. It is a combined effort of many: our publisher, editor, webmaster and collectors/contributors far and wide. Please use the COMMENTS feature below to let us know how we're doing.
PrevPreviousThe World’s Champion Cotton-Picking Contest
NextDon’t Monkey Around with the Telephone!Next
6 Comments
Oldest
Newest Most Voted
Inline Feedbacks
View all comments
Carol Roark

It looks like the artist was Clarence Marshall Davis (1909-1999) – who went by Marshall Davis. He was born in Michigan and died in Norwalk, CT. Davis was working for the Army Times when he was drafted. He married Lisa Lundin, also an artist, and the couple frequently exhibited their work together during the 1950s and ’60s. Davis published two pages of sketches of soldiers in the April 13, 1942 issue of Life magazine as well as the illustrations for a young adult book called “Partners of Powder Hole” (1947) written by Robert Davis. The couple (she used her maiden… Read more »

Thank you for sharing this history. I served in the US Navy (1971-1974) and when they shouted “Mail Call” everyone’s heart skipped a beat. To this day- the mail delivery something I look forward to. His art work was spectacular.

I love these post of postcard history. I look forward to getting them.

Great article on the CCC and artist Marshal Davis. My Dad worked in the CCC,s and use to tell me stories of the projects he worked on in upstate NY. A couple of my uncles and some of Dads buddies often would chat about those days and their gratitude for the work. Over the years I visited some CCC structures/projects and let my mind wander what it must of been like for my Dad. Keep this postcard history coming as I look forward weekly to taking some time out to read it. Like so many other readers we are so… Read more »

I love the postcards! Especially the one that he says, please send more. Read umteenth time. I would love to have all these postcards! Thank you