A Chinese Gentleman
and A Chinese Lady

On the premise that even today a collector may buy postcards featuring Scottish men or Welsh women in traditional dress that would be similar to images sold as many as 100 years ago, it is impossible to say that the outfits worn by the Chinese lady and gentleman on these cards are authentic or contemporary. I suspect the dress is more the publisher’s perception of how the western world would view a native of China at any given time. 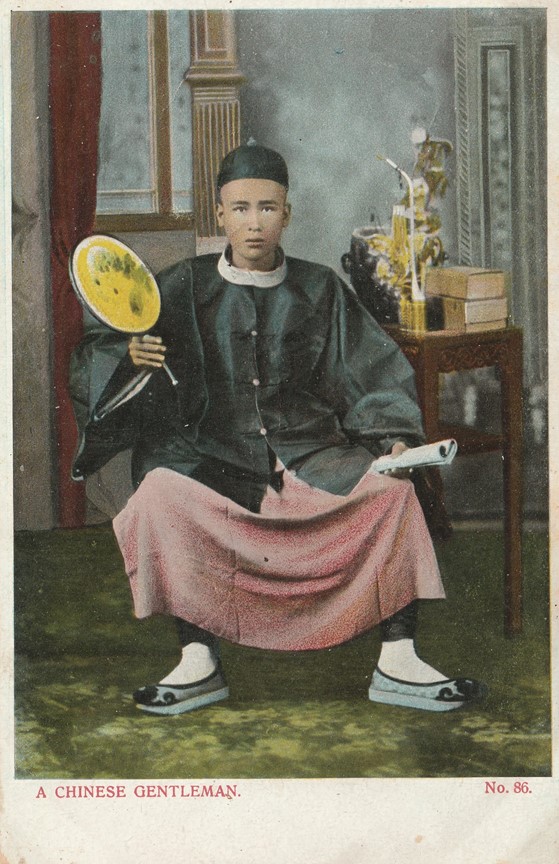 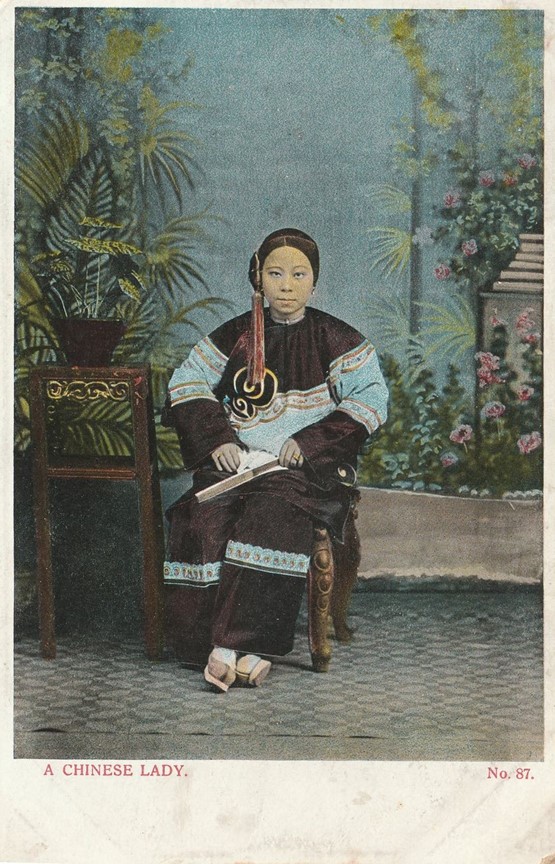 The cards are titled “A Chinese Gentleman – No. 86“ and “A Chinese Lady – No. 87” are very colorful postcards featuring images of young Chinese people holding fans. The two individuals are surely of the same social level (and since these cards are numbered sequentially), it may be that the gentleman is the lady’s husband or brother.)

She is wearing a richly colored kimono and closed shoes. I viewed a similar postcard image featuring similar shoes and the seller suggested that such shoes were worn to bind women’s feet. It is difficult to know whether this woman’s feet are bound or not. They may not be, since an Internet source leads the reader to believe that the practice was banned at the time of the postcards. The source follows:

“In 1906, writer Zhao Zhiqian published in Beijing Women’s News an opinion where she blamed women with bounded feet for being the weakness of China’s strength in the eyes of other nations. Many members of anti-foot binding groups pledged to not bind their daughters’ feet nor to allow their sons to marry women with bound feet. In 1902, Empress Dowager Cixi issued an anti-foot binding edict, but it was soon rescinded.

In 1912, the new Republic of China government banned foot binding, though the ban was not actively implemented, and leading intellectuals of the May Fourth Movement saw foot binding as a major symbol of China’s backwardness.”

The images of shoes worn by woman whose feet have been bound are shaped more like the hooves of horses than normal shoes.

The young woman’s hair is beautifully braided and whilst accepting that these may be props in a studio pose, the woman is possessed of some wealth as she wears a gold ring wedding ring and a second gold ring on her right hand.

The card has no postal markings although it is dated August 23, 1909. There is also a message from aboard the “R.M.S. Katoria, Calcutta (enroute).

Dear Mary,
Trusting this finds you well & enjoying yourself. I am enjoying life A1 & we all had a field day in Rangoon whit wis jist sublime, & we had a pleasant voyage across.”

It can be assumed that a ‘field day’ is a day of leave. The phrase ‘whit wis jist’ sublime is typical of many messages from Matthew when he uses ‘proper’ English and then reverts to short phrases of Scottish slang such as “Ye ken frae wha’ (You know from whom) or, in this case, ‘whit wis jist’ (which was just).

Certainly, of interest is the fact that this message references the R.M.S. Katoria, a vessel on which Matthew Watt was working and sailing on towards Calcutta (now Kolkata and the capital of India’s West Bengal state). The interest is generated because the letters R.M.S. is the abbreviation for Royal Mail Ship and the frequent absence of postage stamps and postal markings on Matthew’s cards to Scotland suggests to me either that free postage was a perk of the crew of such vessels or, alternatively, Matthew had an ’informal’ arrangement in place.

There are numerous references to the steamship Katoria in the newspaper archives. Many are in regard to her having plied her trade on the seas. Perhaps the earliest reference is from the Glasgow Evening Post of October 25, 1889, in which the following can be found under the heading LAUNCH AT DUMBARTON.

“Messrs. William Denny & Brothers, Dumbarton, launched to-day the steel screw steamship Katoria. Builders’ dimensions, 240 feet by 34 feet by 26 feet-6 inchs to shade deck, gross tonnage about 1,120 tons. Messrs. Denny & Co. supply the engines on the triple expansion principle. The Katoria has been built for the British India Company (Limited), and was named on launching by Miss Handheld of Kingston-on-Thames.”

The vessel had at least two collisions (1890 and 1919) and was involved in a few notable points in history. It was the Katoria that the U. S. reporter Henry Morton Stanley (of “Doctor Livingstone I presume” fame) and his officers sailed on from Mombasa when returning from the Emin Pasha Relief Expedition (1889). The vessel was also involved in war activity in the Dardanelles and the Belfast Telegraph of December 10, 1938, carried the following short report.

“SHIP CAPTAIN’S ROMANCE. WED RUSSIAN GIRL HE RESCUED. Capt. Angus Maclean, whose body was cremated on Friday at Southampton, and whose ashes will be taken to Glasgow, his native town, saved 2,000 Russian refugees when he was in command of the vessel Katoria in 1919. The Bolshevists were advancing on the town, and the Katoria arrived just in time. Captain Maclean fell in love with a young Russian girl, one of the refugees, and married her. He served with the British India Company for 31 years.”

From a website named ‘World War 1 at Sea – Ships of the Royal Navy, 1914-1919’ I read the following under SUPPORT and HARBOR VESSELS.

Another source had that the British India Company vessel “Katoria landed troops at noon on Armistice Day to accept surrender from the Turks in the Dardanelles.”

As regards the ultimate fate of the Katoria: she was scrapped in 1923 although she may have spent her final years in different waters as the Morning Oregonian (Portland) of February 11, 1921, reports “The Japanese steamer Katoria Maru returned early this morning from Vancouver, British Columbia, where she loaded …. lumber, proceeding then to Seattle to complete a cargo for the orient.”

As for the Chinese lady and gentleman in period costume; what is it that makes so many Orientals appear timeless?

Bob Teevan is an eclectic collector of vintage postcards. He enjoys digging into the people and places related to his cards and thinks of a postcard as a window into history. He has recently begun a Facebook group, “People and Places behind Vintage Picture Postcards” that has informal and fun discussions in respect of the people and places behind postcards. He is also keen to keep the fun in the collecting hobby. He lives in Scotland.
PrevPreviousReproduction Postcards – Be careful! They’re Out There!
NextJohn T. McCutcheon – American CartoonistNext
5 Comments
Oldest
Newest Most Voted
Inline Feedbacks
View all comments
Violet Walsh

What the woman is wearing looks more like late Qing Dynasty shanku (also called ruku). The kimono was worn in Japan.

Thanks, I think you are correct. Another nice story and amazing how many folks will read it!

I’m wondering how Miss Handheld came to be given the honor of naming the Katoria. She sounds like a character from a Dickens novel.