How I Collected the Famous
Chicago Attractions Postcards

In the early 1950s, Curt Teich & Co. Inc. of Chicago produced a series of comedic postcards using cartoon images to celebrate the best-known of Chicago’s tourist attractions.  The Famous Chicago Attractions set was first encountered as I looked through dealers’ “Humor” categories. An immediate interest in the set is triggered by the bold artistic style and sly humor.

At first, my pursuit was limited to often-frustrating searches through dealers’ “Humor,” “Comic,” and “Chicago” boxes. As my collection increased, I finally had to resort to eBay to track down the cards I was missing.  I found it helpful to set up an eBay “saved search” that sent me an email whenever a postcard in the series was posted for sale. It took a couple years but I was finally able to identify and acquire 21 of these Chicago postcards, which I believe is the complete set. The large-letter #20 – “Trying to Cover the Town” – was the one that eluded me for the longest time.

In November 2021 the completed set was exhibited at the Old Dominion Postcard Club show in Chester, Virginia. The exhibit board got lots of attention and Postcard History’s editor was among those who admired it. The entire board and other sample cards are included with this article.

The postcards are numbered 1 through 22 (the number appears in the upper-right corner), but I have never seen card number six (#6) and can only assume that it never existed and that is likely because of a misnumbering situation. Misnumbering is the only logical explanation because based on the Curt Teich alpha-numeric production codes, there was a break in production. The series originated in 1951 with Postcards 1 through 5, while Postcards 7 through 22 were created in 1953 and included the “Famous Chicago Attractions” pennant logo in their designs.

Here, for a close-up look, are my five favorite cards from the set. 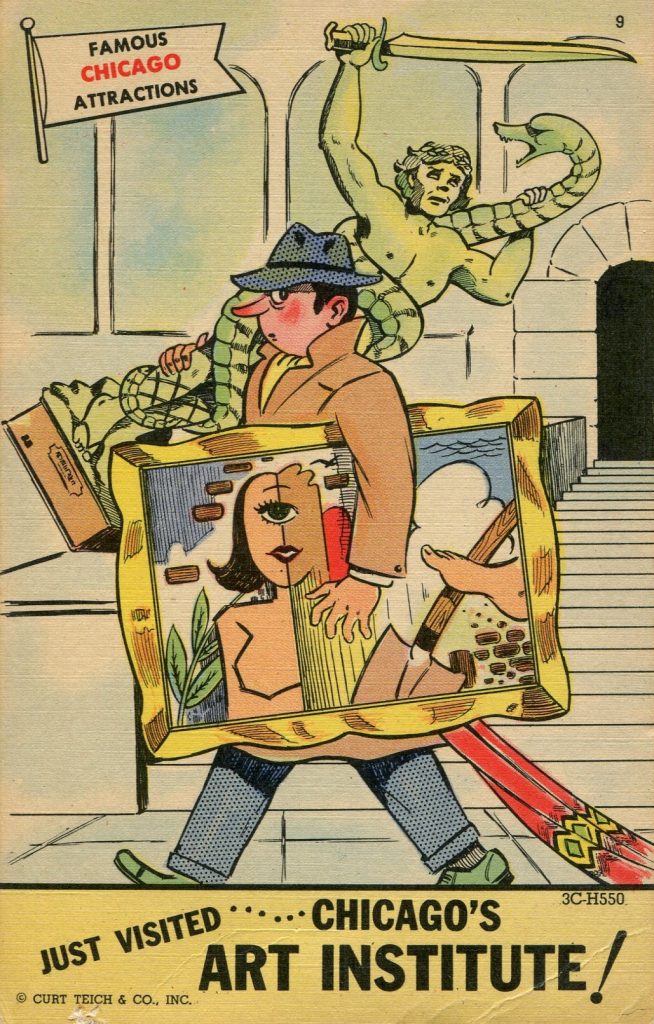 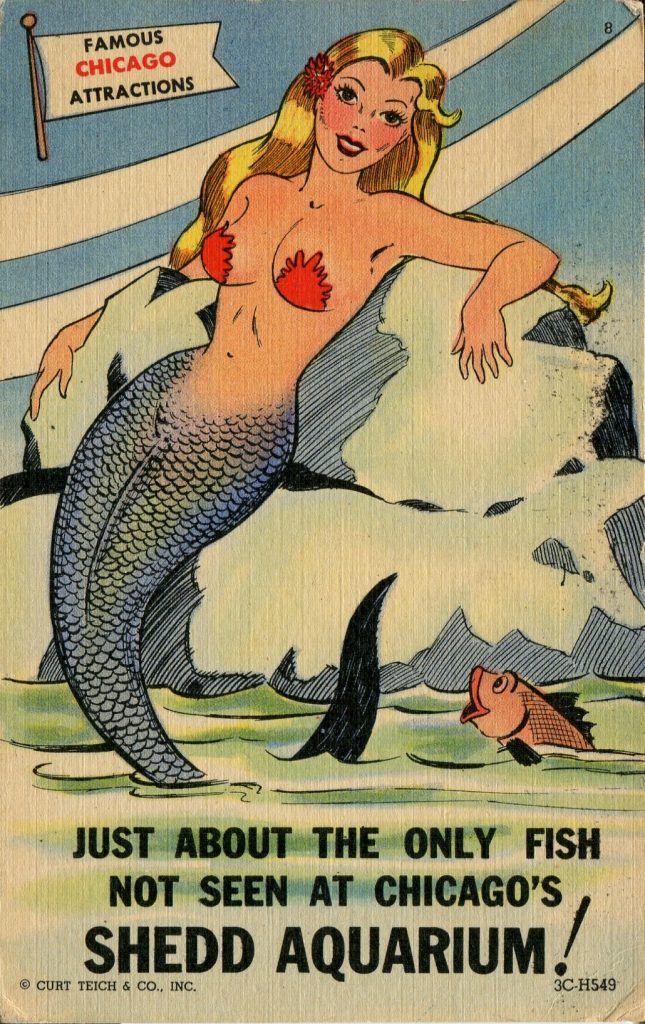 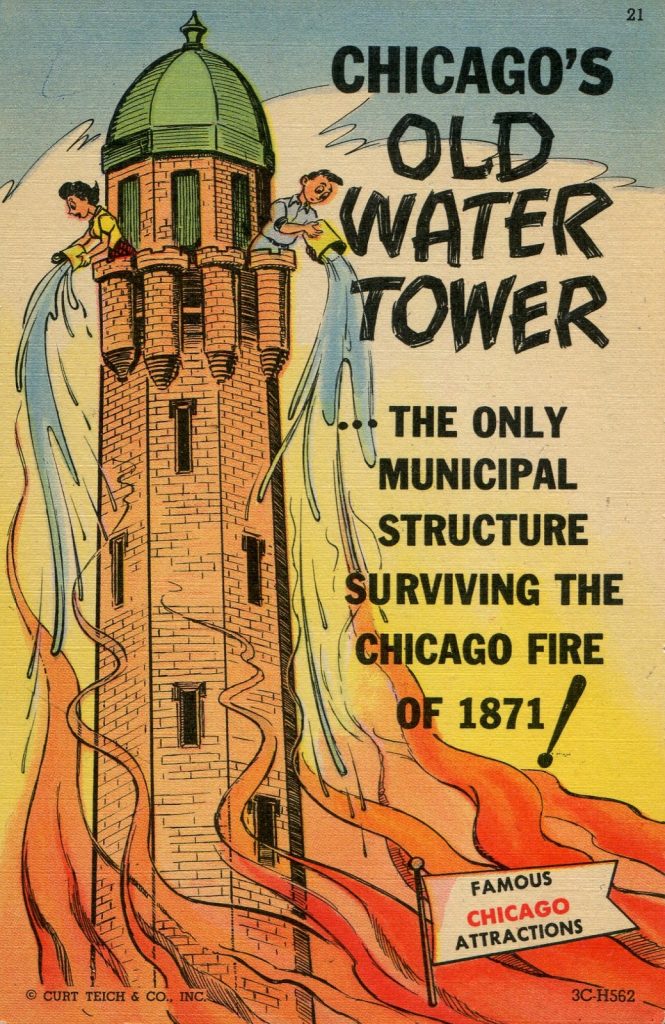 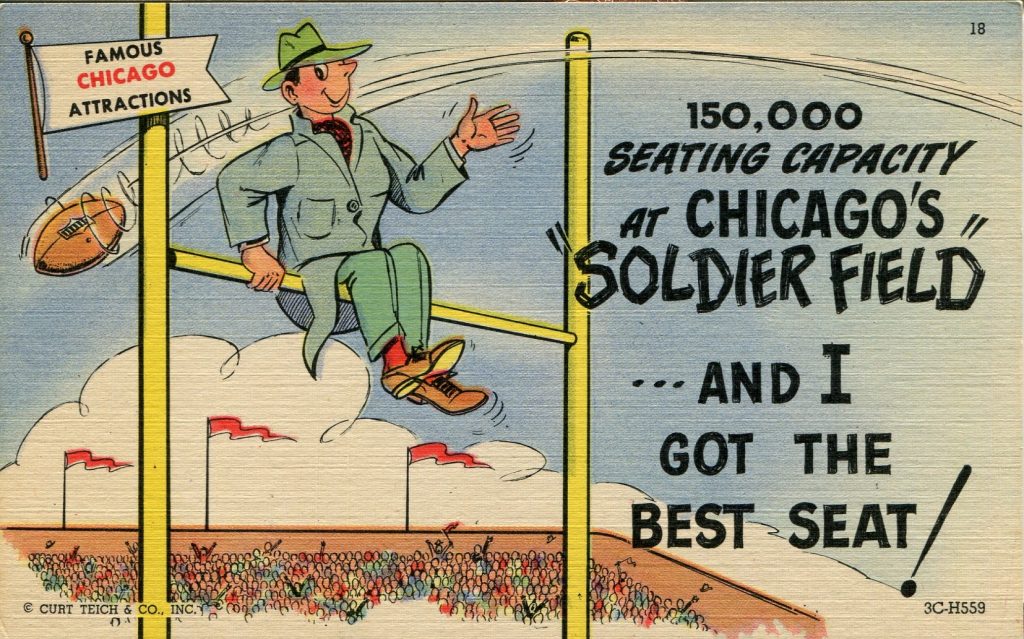 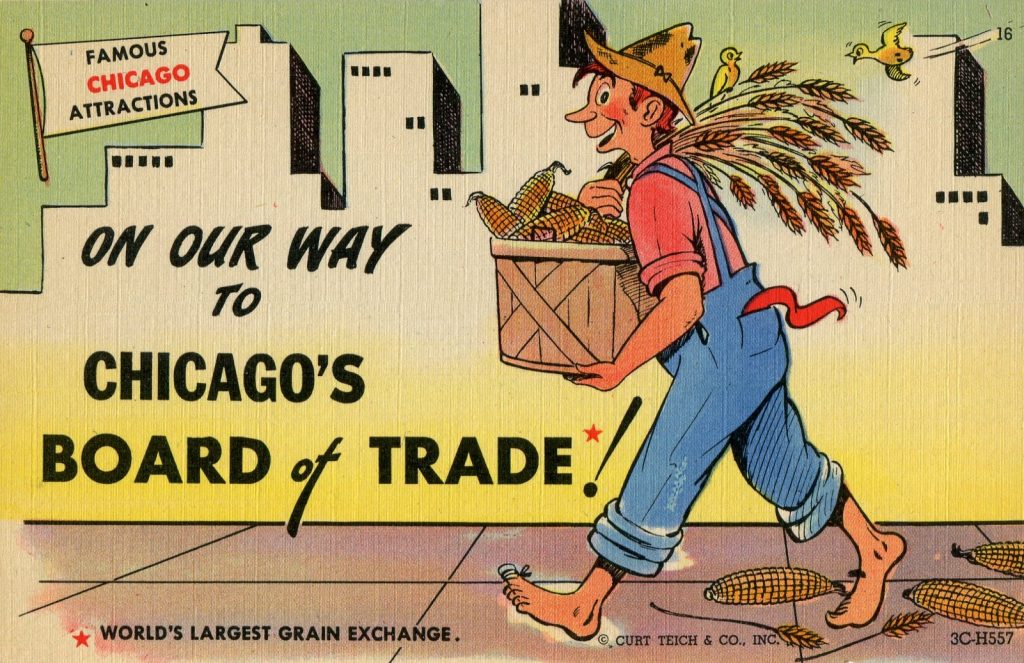 Inquiries are in the works to discover the name of the artist, but as of now the artist is still unidentified, but we do know that the Chicago cards weren’t the only ones created by this artist for Curt Teich. Currently seven other tourism-related postcards were produced by Teich from 1952 to 1954 with images, seemingly by the same artist, including three from Washington, D.C., and ones from the “Southwest,” Deadwood, South Dakota, Miami Beach, Florida, and Lake Erie. 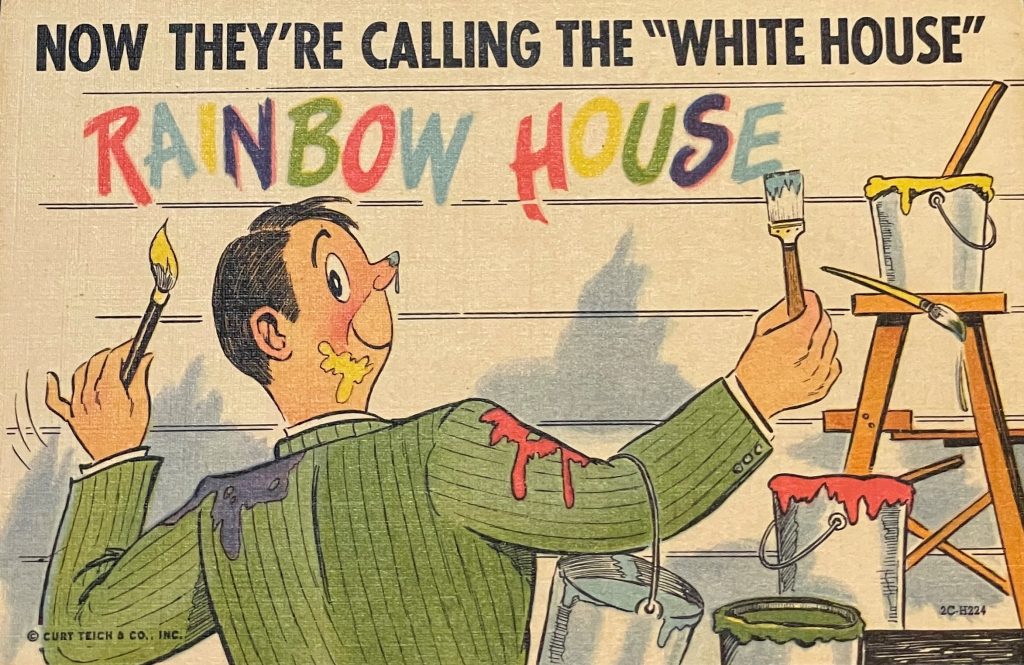 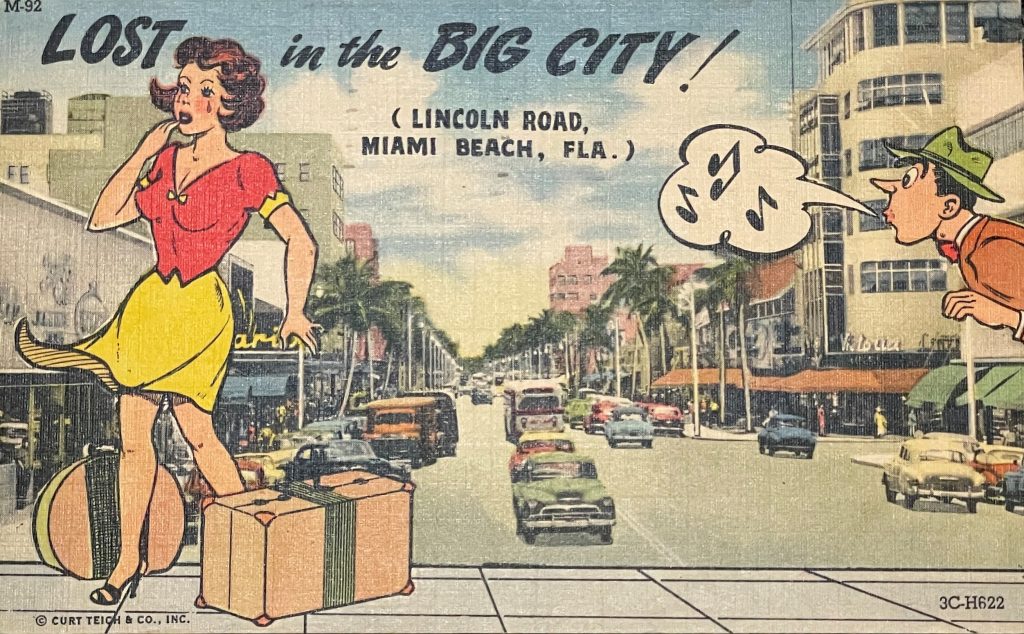 … from Miami Beach, Florida Lost in the Big City 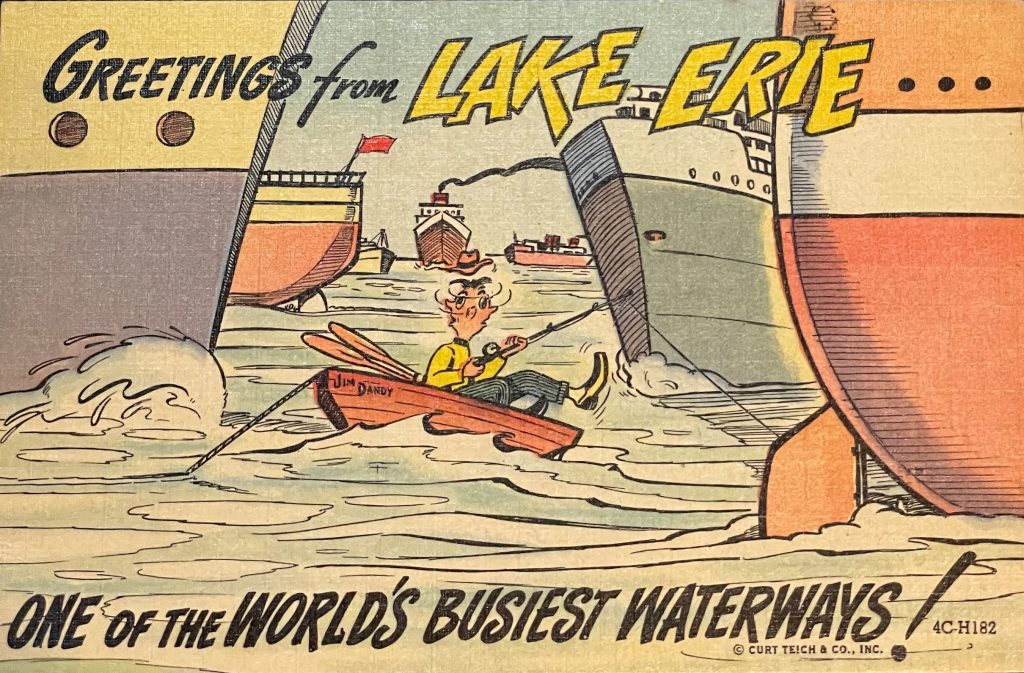 … Greetings from Lake Erie One of the World’s Busiest Waterways! 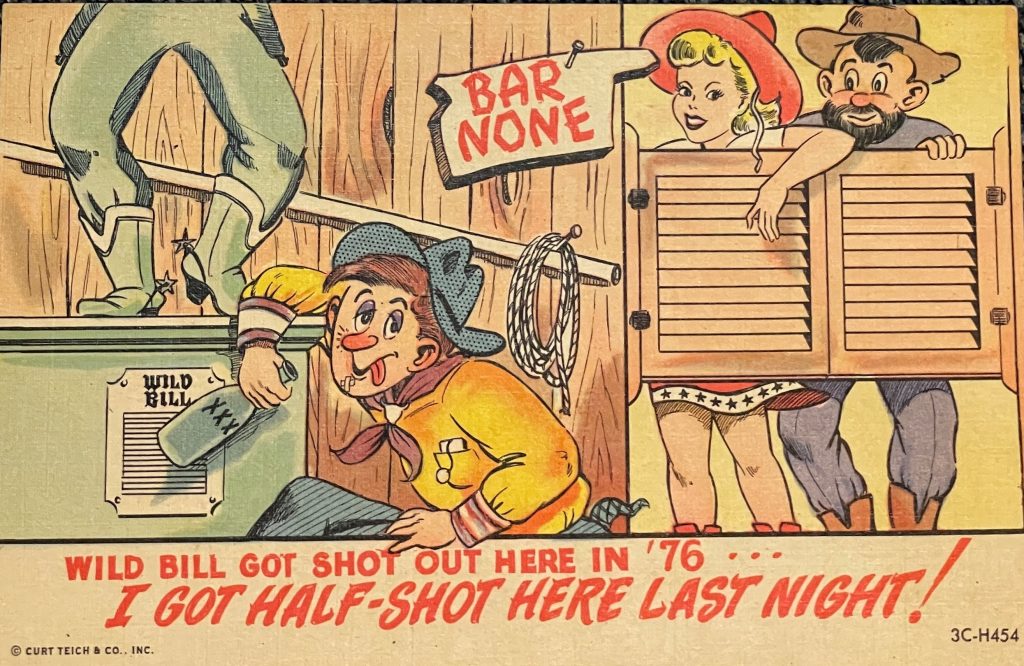 In the spreadsheet below you will find a checklist of the Chicago cards. Included data are the Titles, Card Number, Description, and the CT Production number. Hope you find this helpful if you decide to collect these cards. I have enjoy collecting them and I think you will too!

Tre Rockenbach is a devoted collector and an active member who serves as the Vice-President of the Old Dominion Postcard Club in Virginia.
PrevPreviousLost Occupations
NextWanna Start a Fight? – Here’s how!Next
5 Comments
Oldest
Newest Most Voted
Inline Feedbacks
View all comments
Bob Kozak

The Chicago cards are quite humorous. Of the others, my favorite is the Miami Beach view.

Thanks for sharing these! Once again this group brings a smile to my face.

Wonderful article…something I have long wondered about, but now to KNOW and to be able to see all of the postcards. Thanks very much!!

I did this EXACT thing, card by card, over a ten-year period. Also lack just card #6. I was VERY excited when I completed my collection, but I’m envious that you shared your quest with a lot of people. My collection is just in my desk drawer.

And #20 was the last one that had eluded me!