The Search for Agnes Richardson

At an unremembered postcard show, some years ago, a set of ten-postcards entitled the “Celesque Series” was found among a handful of cards in an artist signed grouping. The images were of professional quality and were obviously meant to be sold as a set. Although foreign artists were a big part of my collection for more than a decade, the name Agnes Richardson was an unfamiliar one.

Furthermore, the word celesque is one that has yet to be satisfactorily defined, except by one of the many vulgar and nonsensical online dictionaries.

These cards have languished in my “To Be Filed” album ever since ….

Being one that assumed nothing, when it came time to research the individual named Agnes Richardson, there was nothing to suggest there would be so many people with the same name. For what seemed to be an unending series of decades the name Agnes Richardson appeared in London (and other British) newspapers. For the sake of understanding the complications of such research, I would like to introduce you to five Agnes Richardsons – one a child and four adults who lived in England at the start of the 20th century. 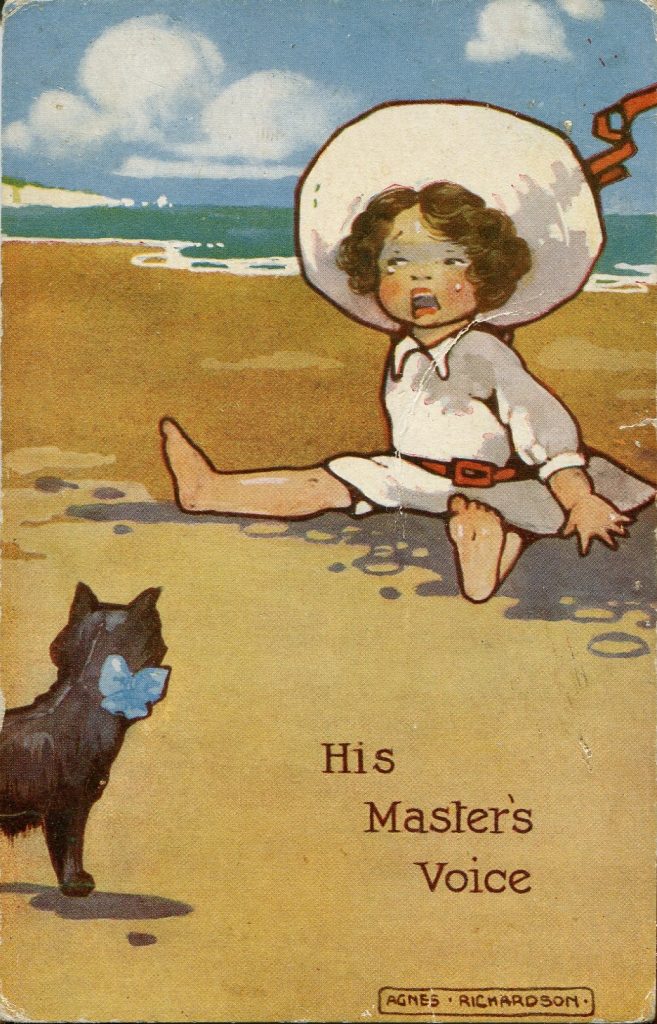 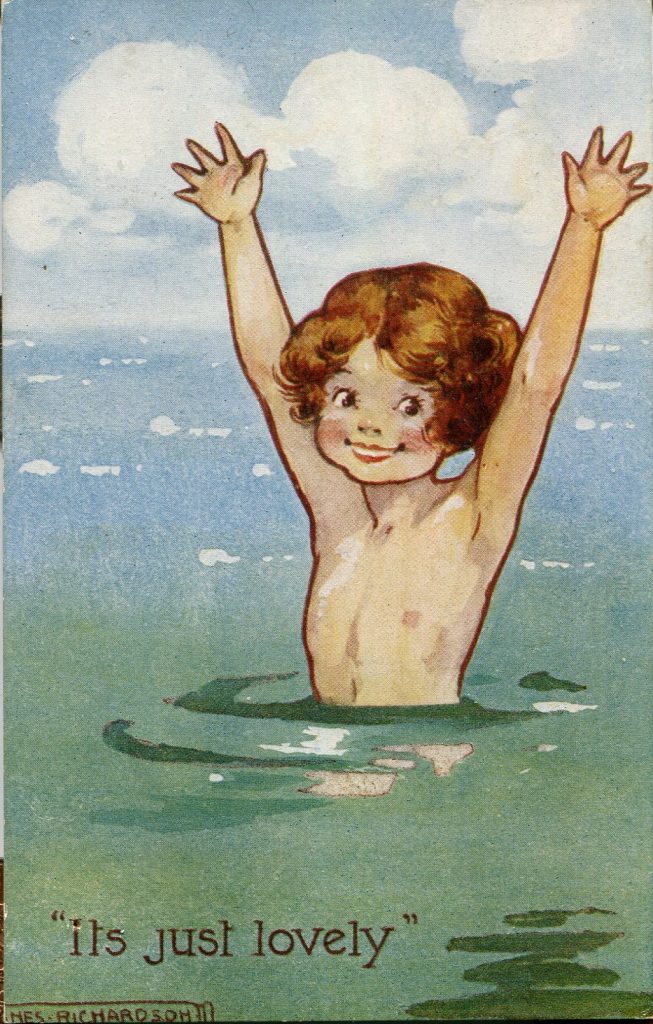 The first Agnes Richardson was an artist (but not the one of our concerns) whose name is mentioned in the Pall Mall Gazette of London on June 16, 1896. In a report that could have been the annual accounting of events at the Royal Academy, a snooty, unnamed fool reported that “The Wallabrooke, Dartmoor,” is the best landscape I have seen painted by a woman.” This was from a dialog concerning an exhibition of landscape paintings.

The second Agnes was a plain and simple lady who lived in Acton Street, near Gray’s Inn Road. The account of her death in the London Guardian may have been the only time her name appeared in a newspaper. Just before the Wednesday, September 4, 1912, edition, Mrs. Agnes Richardson experienced a fatal fall downstairs in her home on Acton Street. At an inquest her husband said that his wife had put out the gas in the living room and was going upstairs with a candle. She caught her foot in a braid hanging from her dress. 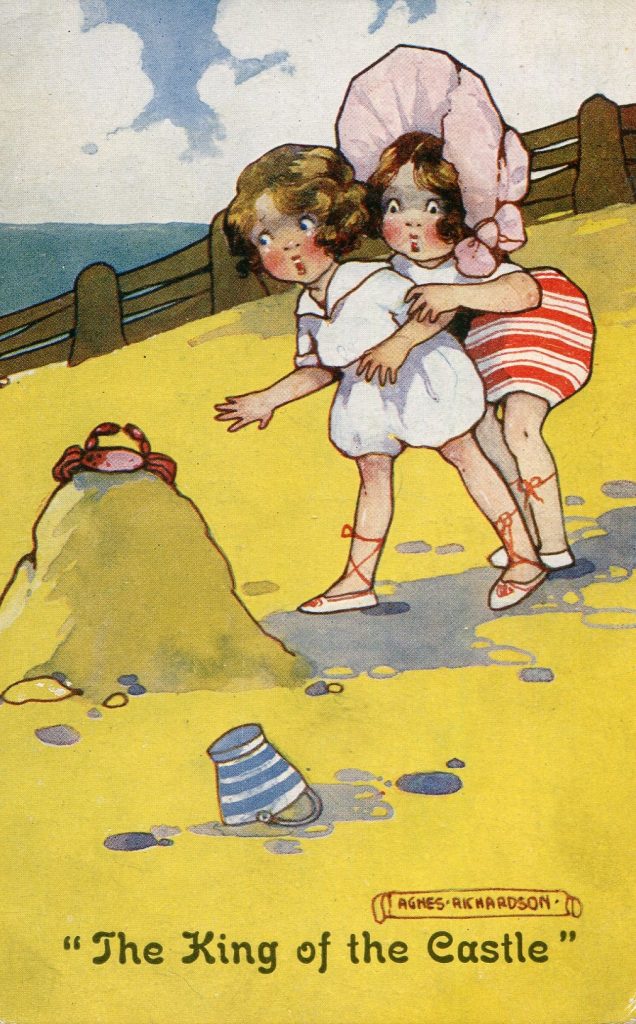 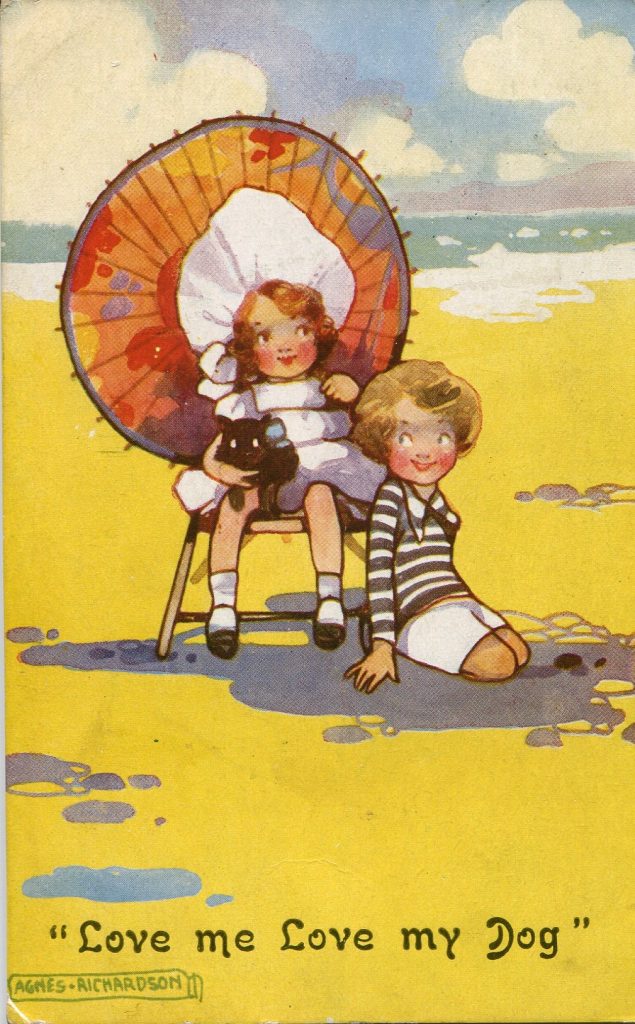 The third Agnes Richardson was talked about in the Daily Telegraph of London in the June 24, 1902, edition. This Agnes Richardson and her brother who did business as stick (cane) and umbrella manufacturers were charged with conspiracy to defraud many London gentlemen under false pretenses to obtain moneys, valuable securities, and credit. In later newspapers an announcement was found concerning the siblings’ guilt as was determined by a jury and their sentence imposed by a judge. She and her brother were sentenced to prison terms.

The fourth Agnes Richardson was a 9-year-old child who was killed in a milling accident.

Finally a simple Google search resulted in a discovery that an artist named Agnes Richardson (1885-1951) was born in Wimbledon and studied at Lambeth School of Art in London.

It was equally easy to learn that Richardson illustrated children’s books, designed greeting cards, and was quite accomplished at public-notice poster art. One characteristic of Richardson’s art was the constant use of her signature – a fully spelled-out name enclosed in a banner.

The best-known of her illustrations appeared between 1914 and 1936 in Edric Vredenburg’s Golden Locks and Pretty Frocks, Lewis Carroll’s Alice in Wonderland, Charles Perrault’s Fairy Tales from the French, and A. G. Herbertson’s The Cosy Corner Book. Richardson also authored a collection of short stories based on singular works of her own art, The Agnes Richardson Book. 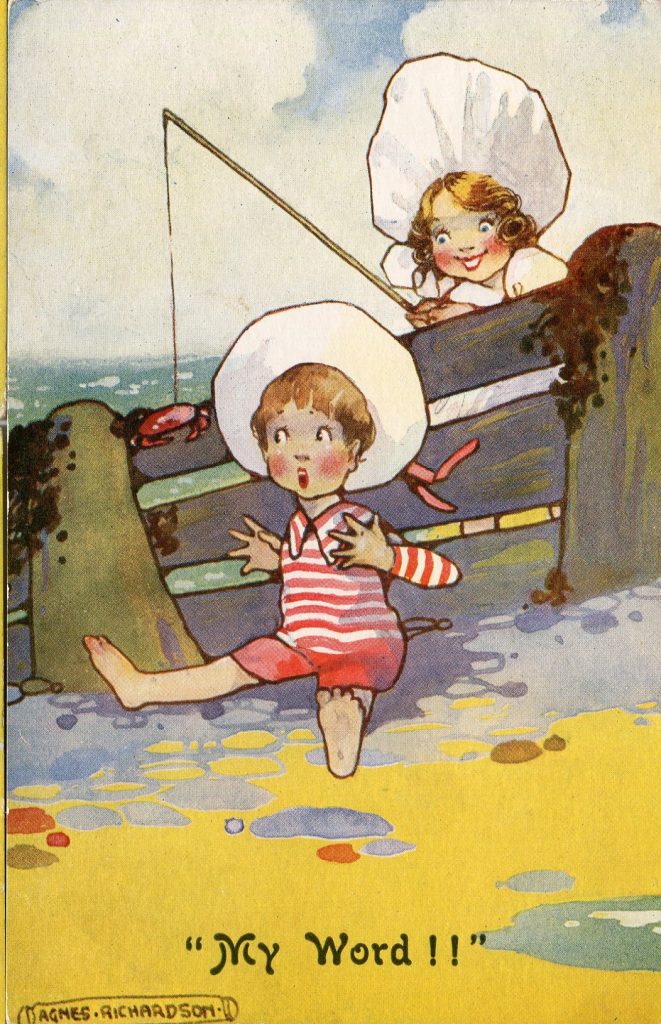 The who, what and where of Agnes Richardson, number five, has been considerably less easy to find. Nevertheless, it is suspected and sadly still unconfirmed that in 1932 when A. G. Herbertson published the Cosy Corner book that it was the one and only time Richardson used her married name Agnes Grozier Herbertson during her career, doing so to honor her husband A. H. Herbertson who was killed in action during World War I.

The Herbertson Glacier in Antarctica is a namesake of her father-in-law, A. J. Herbertson, an Oxford University geographer.

These five examples from the Celesque Series of postcards are among the more than 40 thousand images published by the Photochrome Company of London and Turnbridge Wells, England. Photochrom was among the first in Europe to use the Swiss invented photo-chrome printing process. They were best-known as printers of guidebooks and postcards.

PrevPreviousWanna Start a Fight? – Here’s how!
NextTwo from the President’s Cabinet – 1933 to 1945Next
8 Comments
Oldest
Newest Most Voted
Inline Feedbacks
View all comments
Bob Teevan

I too had trouble researching this name although came up with the following a few months ago. I hope it is of interest. – Agnes Richardson was a reasonably prolific illustrator, and her cards are usually much in demand. I believe her work is invariably children and in addition to this ‘teddy’ series I recall seeing several cards which are predominately blue in colour and feature Dutch children. As far as her work goes, she is up there with the likes of Mabel Lucie Attwell although when it comes to finding a biography on her what little there is available… Read more »

Are you sure this is the same Agnes Richardson, Bob? Although the 1884/85 birth year confusion is understandable enough, the fact that the artist’s husband A.H. Herbertson was killed in action during World War I seems irreconcilable with a marriage to Arthur Savage that lasted from 1911 until at least 1939.

Thank you. I shall recheck the facts / info.

From the Internet under ‘Good Reads’. – “Born in Oslo, ca. 1875, to a Scots family, Agnes Grozier Herbertson was the daughter of James Grozier Herbertson, and his wife Jessie Peattie. Her father’s employment with a shipping company kept the family on the move, with the Herbertsons married in Norway, and their children born in Norway, France, and Scotland. Herbertson’s younger sister, Jessie Leckie Herbertson, was also a writer, and the two lived together from the late 1930s, eventually retiring to the Edinburgh area.” Andrew Hunter Herbertson (who was killed in 1917 (aged 22)) was the son of the late professor… Read more »

The Celeste Series was published by Photochrom Co., Ltd., London & Tunbridge Wells in 1915

Celsque Series (somehow autocorrect changed it) should be c-e-l-e-s-q-u-e in case it changes it again.

The series was diverse and published photographs and artwork of the ordinary seen as something cute, beautiful, uplifting, which is what the semantics and sense of the word celesque is supposed to mean.

Beautiful art! Enjoyed the article and the comments!