by Beals of Des Moines, Iowa

The story of women in the American military is older than our country. It is true that through the centuries of Western Civilization, or at least up to the twentieth century, governments never sanctioned the enlistment of women as soldiers in their armies. The Roman Legions were supposedly all male, but on occasions women figured in battle – and when they did it was never a happy ending for their opponents. Historians have recorded tales of notable female military commanders (remember a lady name Joan d’Arc) from across many cultures. Some courageous women served in combat alongside their husbands. There are many accounts of women disguising themselves as men, though not in uniform, women shared the same hardships as the soldiers, including inadequate food, housing, and little compensation. Most war narratives tell of how some women disguised themselves to fight in battle but most of the tales point to women as they served in traditional roles as nurses, seamstresses, and cooks for their male counterparts.

Postcards created at that time – one hundred-plus years ago – simply did not feature women as war participants. Remember most women in the lives of the doughboys were their mothers. For the others, it would never dawn on them to have their wives, sweethearts, sisters, or nieces join them on a battlefield.

[For a comprehensive look at the world of that era, every military postcard collector should read John Laffin’s 1988 book, World War I in Post-Cards. It is a scholarly look at the extraordinary phenomenon of war postcards. (Postcard History Online Magazine has a full review of this book coming to its readers in the Fall of 2022.) Special notice should be paid to Chapter Two, Laughing at the Funny and Unfunny and Chapter Five, Hating and Laughing at the Enemy.]

Male dominance in war postcards would certainly be expected in a World War I collection, but so many societal changes occurred between 1918 and 1940 – those were the fringe years and the depths of the Great Depression – that many parts of the National Psyche changed beyond recognition.

One altered attitude was the complete mindset reversal toward the role of women in war and war preparations. It was Rosie the Riveter who personified the campaign to recruit female workers in the defense industries during World War II.  Certainly, a worthy and successful effort but Rosie was a Madison Avenue icon, not a soldier.

There were dozens of artists, muralists, and illustrators on both sides of the Atlantic who made postcard art during World War II. Three Europeans previously highlighted in Postcard History are William Henry Barribal, François Flameng, and Bruce Bairnsfather. As for Americans, who did the same kind of work, Barney Tobey comes to mind, but today we concentrate on a young man who during World War II was still a teenager. His name: Max Halverson.

Max Halverson was the youngest and only son of Isadore and Iris Halverson’s four children. They were longtime residents on Marshall Street in Des Moines, Iowa. Isadore told the enumerator of the Fifteenth Census of the United States (1930) that he was an inventor, which was true, but he was also a teacher at the Des Moines Technical School.

While still in high school, Max produced the WAC postcards for Beals. He was not permitted to sign his art, but through the years – like any good artist – his style with brush and palette became famous. During the war Max served with the 124th U. S. Army Armored Engineers here at home and in France and Germany. After his discharge he signed onto a government training program for mechanical design, and in 1946 he married Rose, his wife of sixty years.

One interesting fact about Max that postcard collectors would be proud to know is that he was a member of a committee that erected the first privately funded state (Iowa) World War II memorial on which several of Max’s postcard images are engraved.

The Women’s Auxiliary Army Corps became the Women’s Army Corps when President Franklin D. Roosevelt signed the appropriate legislation on July 1, 1943. His signature made the Corps an intricate part of the United States Army enabling the women to enjoy all the rights and privileges of an American veteran. This fact alone is enough to accurately date Halverson’s W.A.C. postcard set.

Here’s how: on card WC-2 we see a young woman on her way to a life changing experience as she heads to the W.A.A.C. recruiting office. She even announces in the caption that, “You’ll Never Know Me Now.” These two versions of card WC-2, show the name change of 1943 on the directional sign in the lower left corner. 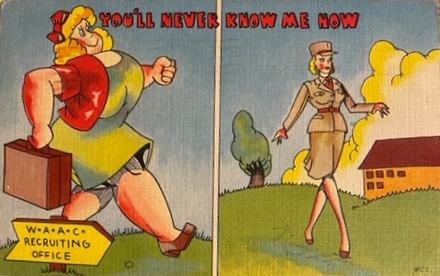 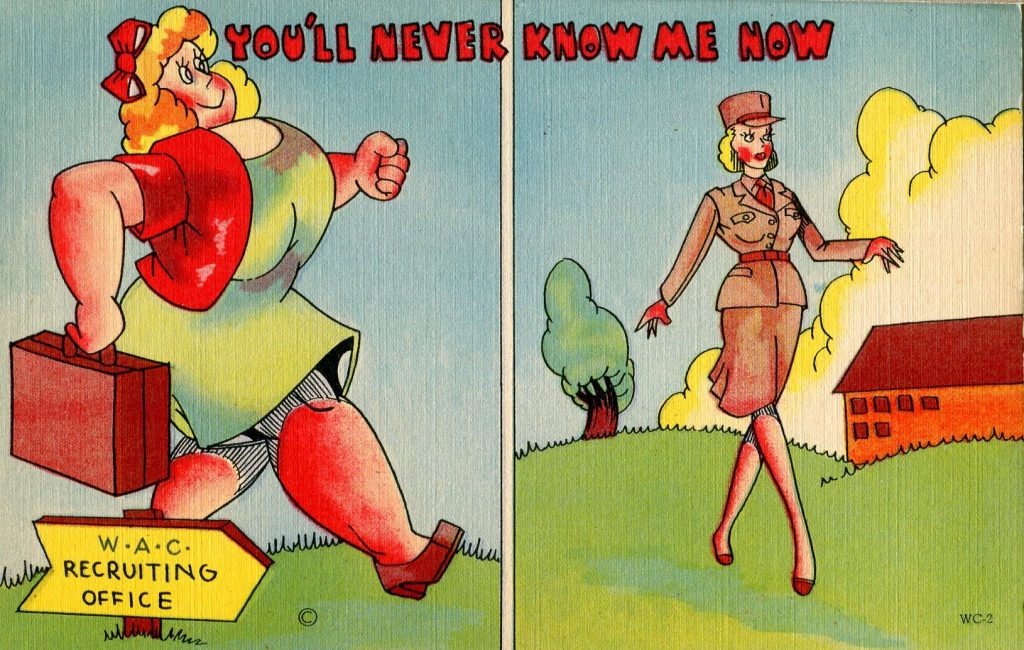 A similar situation comes into view on card WC-25, where the initials on the footlocker have changed. 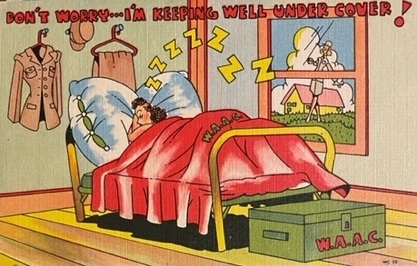 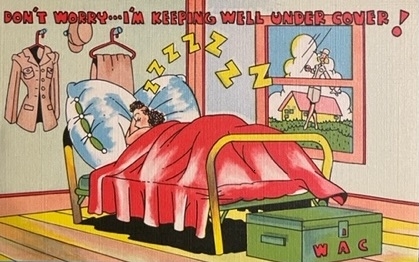 The following checklist is provided for your convenience. Some (*) of the cards appear as illustrations and examples.

Samples of other cards in the set show WACs in all kinds of situations – some funny, some serious, but all charming and humorous. As each card is examined, it may occur to the observer that Mr. Halverson had “a thing” for strawberry blonds with rosy cheeks. 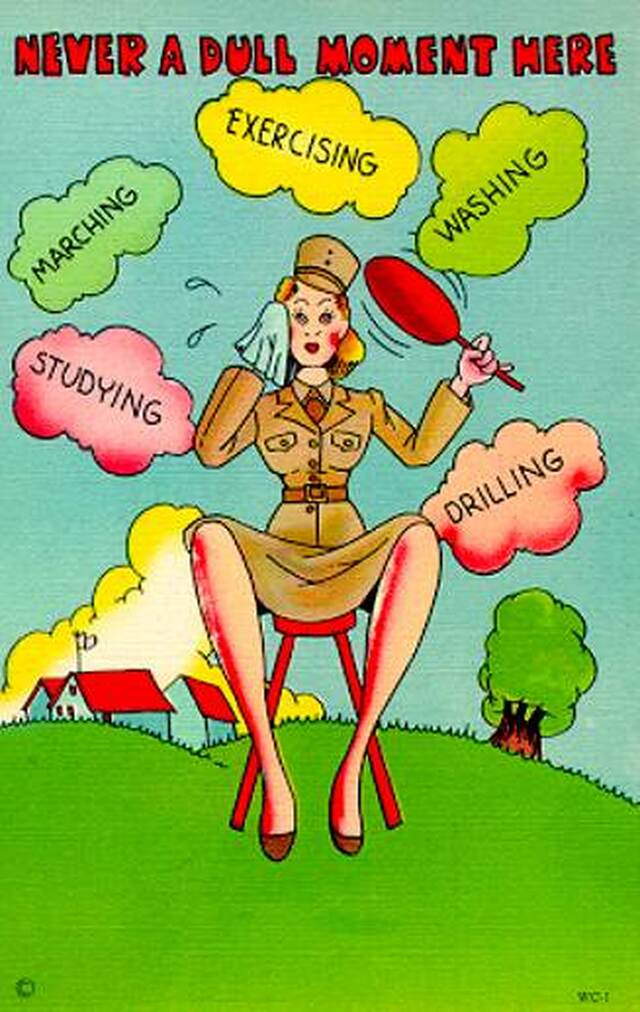 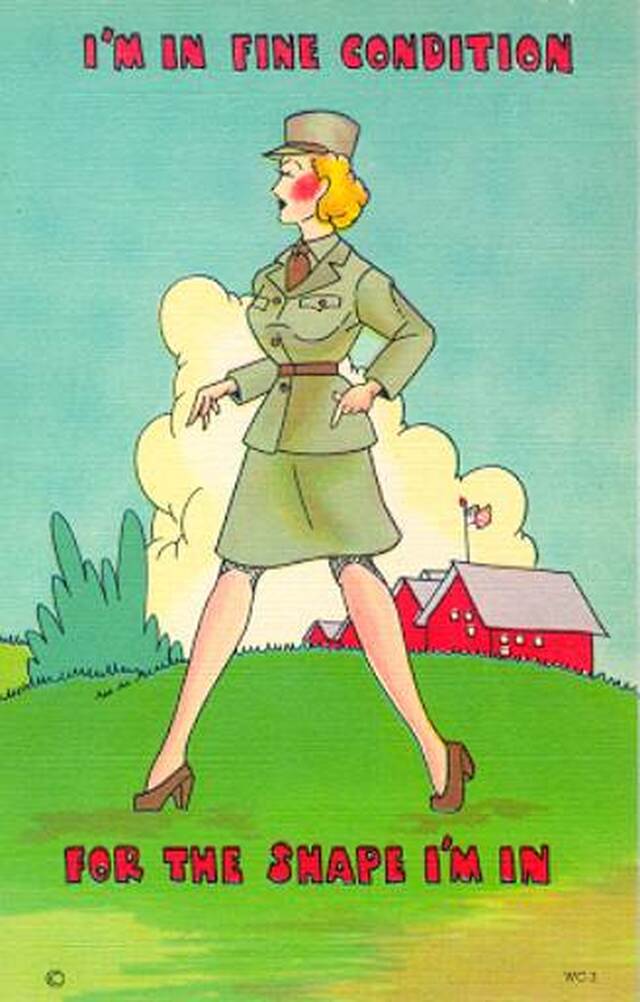 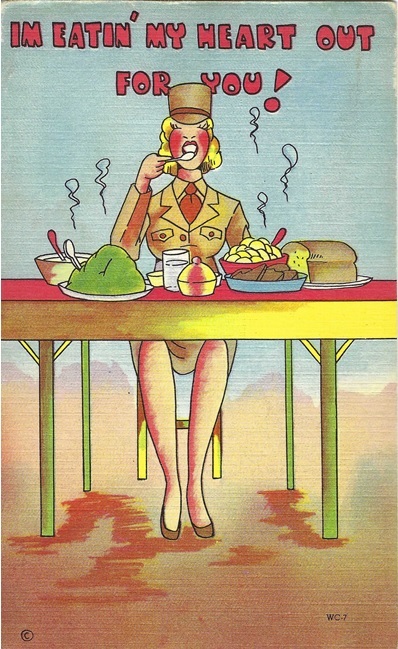 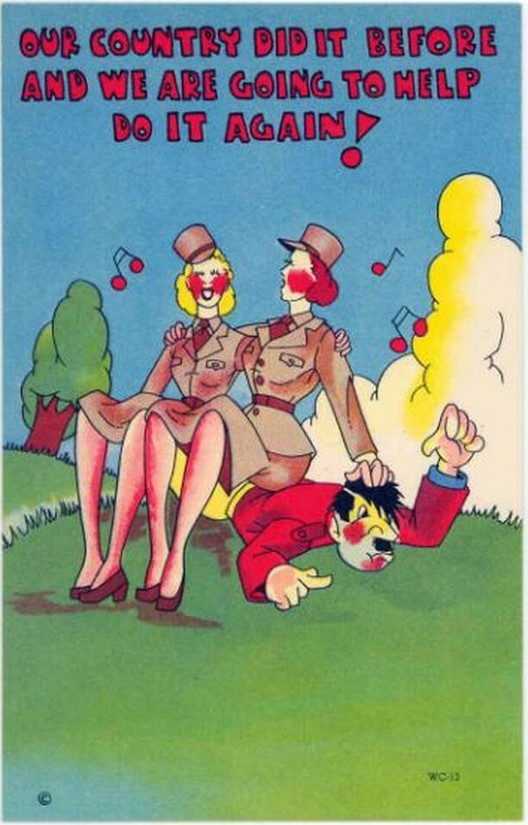 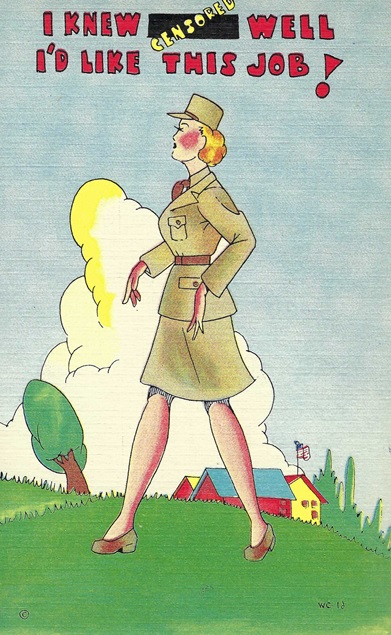 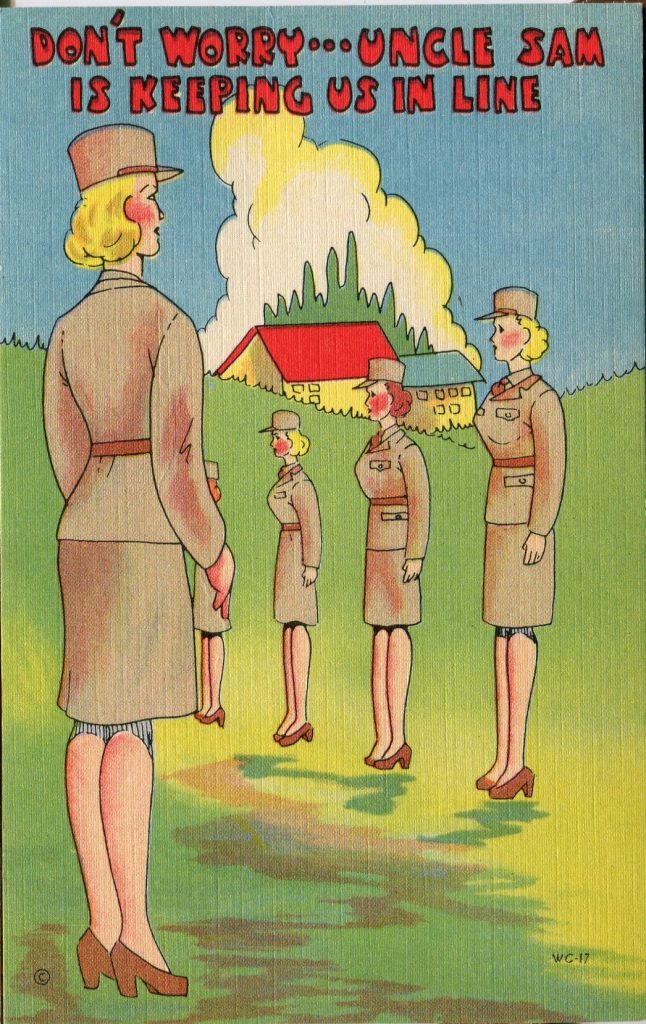 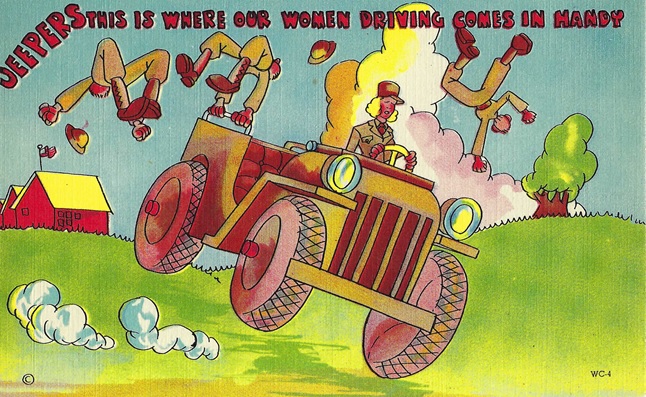 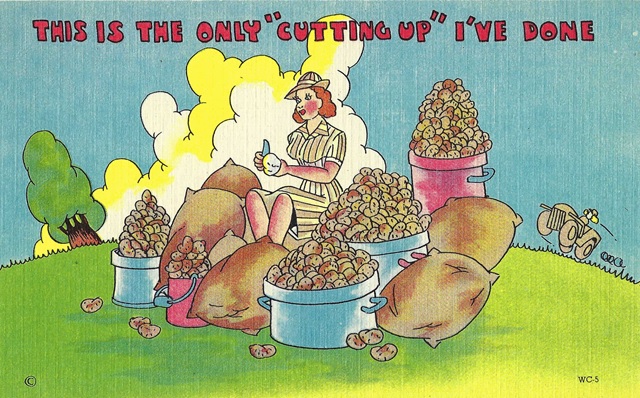 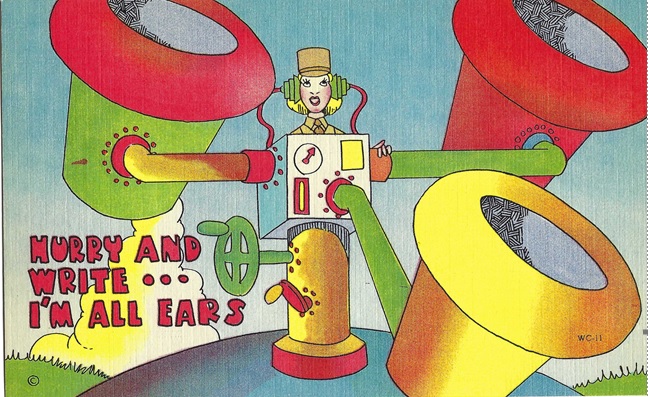 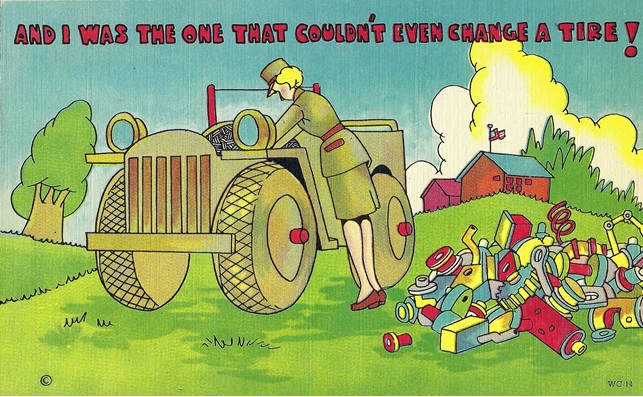 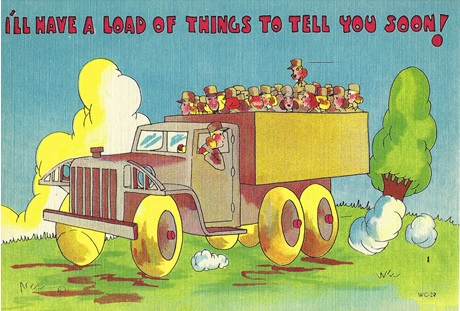 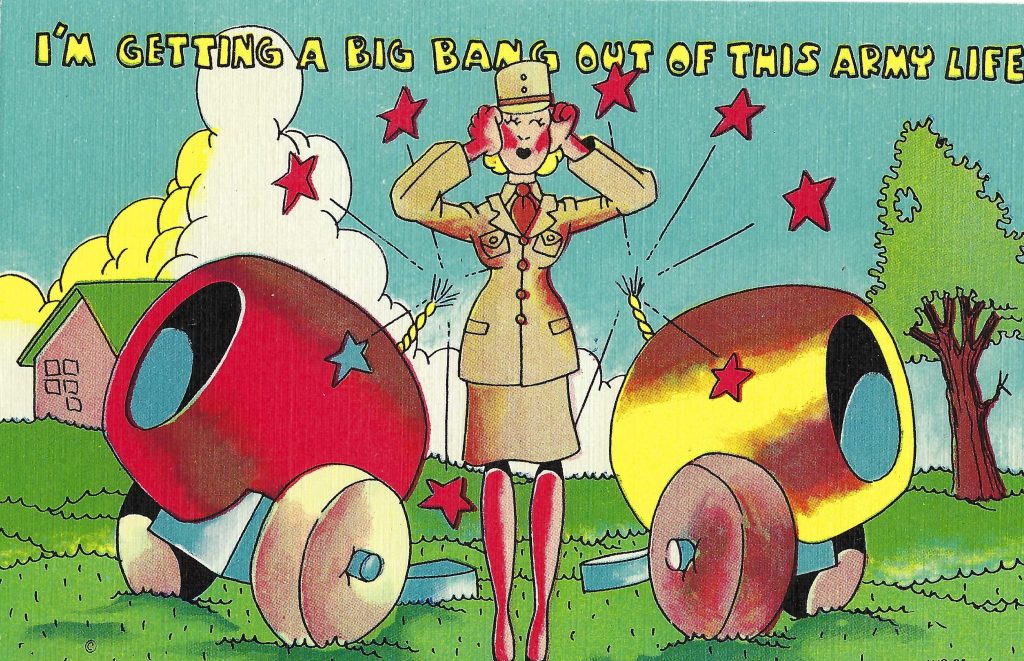 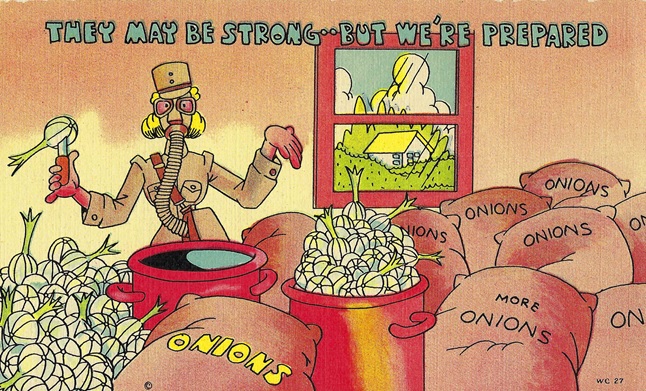 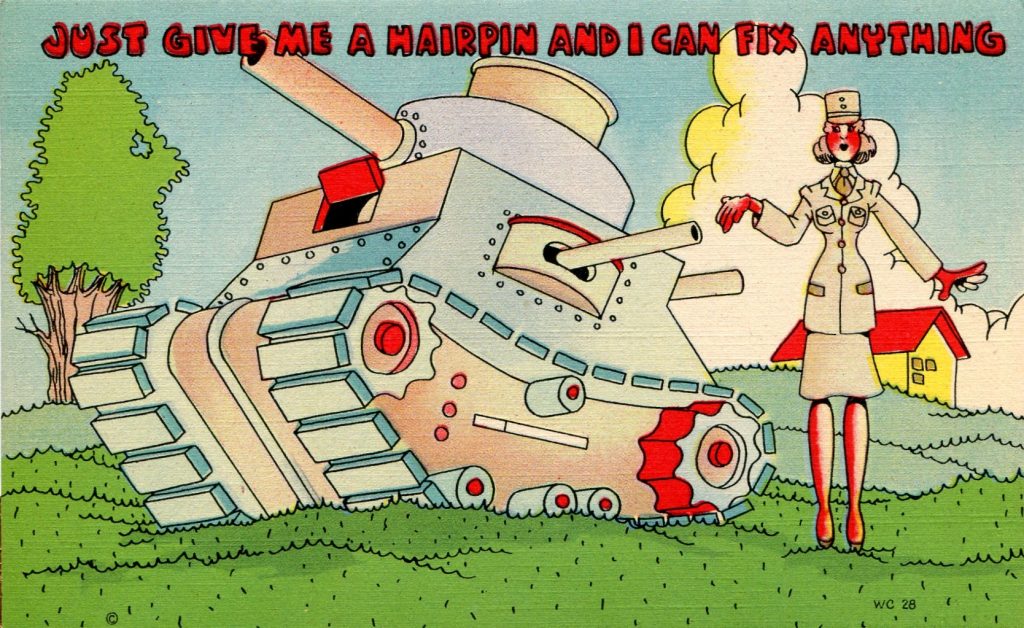 After these W.A.C. cards for Beales in Des Moines, Mr. Halverson did art for the E. C. Kropp postcard company in Milwaukee, Wisconsin.

The staff at Postcard History Online Magazine thanks Hal Ottaway for his help with this article. Mr. Halverson was Hal’s friend and some facts related here are from his memorable visits to the Halverson home in Iowa.

The Staff of Postcard History offers this article for your enjoyment. It is a combined effort of many: our publisher, editor, webmaster and collectors/contributors far and wide. Please use the COMMENTS feature below to let us know how we're doing.
PrevPreviousThe Superior Avenue Viaduct
NextThe Sound of Breaking GlassNext
4 Comments
Oldest
Newest Most Voted
Inline Feedbacks
View all comments
Dennis McBurney

Fantastic article! This was one of the first WW II set of comic postcards that I tried to complete. I’m still looking for the two WAAC variations. I only knew about one of them before this article. Thank you!

I wonder whether “censored” was an original part of the design of cards 12 and 16, or whether Halverson’s intended text was seen as too explicit.

Thanks for the amazing article. The efforts of women during the war do not get enough credit.

Great article. I like the checklist. Now if I can find my comic cards I might just have 1 of his, I hope.