There are generations of forgotten people. History is not kind to the vast majority of mankind for one simple reason: their names do not appear in history books. When Winston Churchill (supposedly) said, “History is written by the victors,” that pretty much explains why the names we find in history books are kings, queens, presidents and other politicians, generals, writers and philosophers, and men of the cloth.

To completely understand this theory – lame as it may be – answer these questions:

The men whose names would answer these questions would be much better known if one of the Messrs. Douglas, Breckinridge, or Bell could have mustered more votes than Abraham Lincoln. The same would be true if Pope Leo X had prevailed over Luther and Wolfram von Eschenbach had shared his book with any other composer.

Forgotten is a very harsh word. It is a status that no one wants to achieve. Being forgotten can be prevented in many ways – none of them easy – but even if you come close to being forgotten, some day, some where, some person will ask, “Who was that?”

The Rose Company of Philadelphia, Pennsylvania was a postcard publisher for a very short time – only a couple years, but the variety of card they published made it possible for collectors from our century to ask, “Who was that?

One set of Rose Company postcards was their Histrionic Series, copyrighted in 1906. Postcard History has not found a collector with an entire set – which may be as many as thirty cards. If you have an interest in collecting the Histrionic Series, we can provide you with 29 names*.

Here are samples from the set. Each shows an actor/actress, singer, musician, conductor, or special personality who flourished between the mid-1880s to the late-1920s. They were people who entertained our great- and great great-grandparents. They were those who worked in theatres, concert halls, opera houses, and many could figure into family legends, but are now not forgotten because they appear on a Rose Company postcard.

Each card has pictures of the featured individual, a quip that may have been a line they spoke in performance, a line of music they may have sung, and a signature.

Blanche Bates (August 25, 1873 – December 25, 1941) was an American actress and opera singer. She starred in Puccini’s opera, The Girl From the Golden West. One line from “The Girl” that has long been a reminder of Miss Bates is, “Love is a tickling sensation of the heart that you can’t scratch.”

R. B. (Robert Bruce) Mantell (February 7, 1854 – June 27, 1928) was a wildly successful Shakespearean stage actor and silent film star. He is best remembered as a character actor who took on only the most challenging roles. He is pictured on the card in the title-role of Richard III.  He signed the card with his initials as he was known to the world. Mantell was also noted for having four wives, three of whom were actresses he worked with. When he died at age 74 he was lamented as the greatest tragedian Scotland ever produced.

Henrietta Foster Crosman (September 2, 1861 – October 31, 1944) was an American stage and film actress born in West Virginia. One of Crosman’s most memorable performances came in 1903 when she premiered the very popular play Sweet Kitty Bellairs. There was no evidence of wild behavior in her personal life but she loved to portray herself as a Broadway vamp and flirt. She loved to tell people that “Any fool can catch a man – but it takes all her wiles to hold on to the devil.” 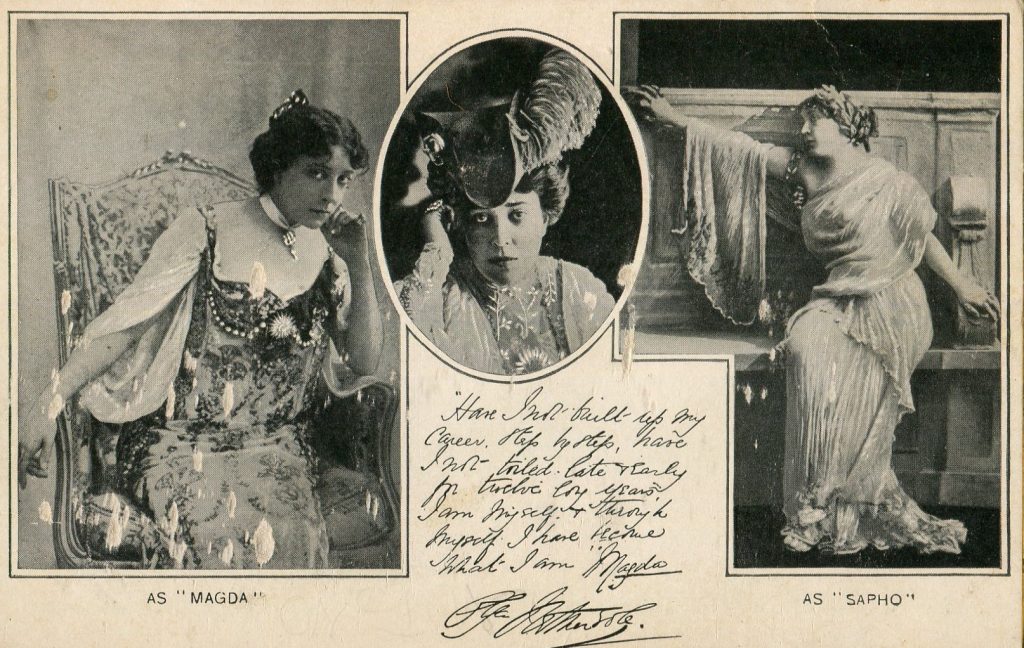 Ray Hahn is a retired educator, but he has never stopped teaching. His decades of researching, writing and editing a newsletter for the South Jersey Postcard Club has been a world-class education in trivia. In addition to postcard collecting, Ray’s other interests include history, genealogy, and touring the world with his wife Marie. Ray often advises his readers to "Join me as we explore the world one postcard at a time." Ray and Marie live in New Jersey.
PrevPreviousQuestions Never Asked at the Nudist Camp
NextPostcards from the Société AnonymeNext
5 Comments
Oldest
Newest Most Voted
Inline Feedbacks
View all comments
Paul Schafer

Very good article. Who would think Madame Schumann Heink would not be known today?

I only know about her from a friend from San Diego in his 80s and an opera buff.

Now I have to o visit their graves! The only one from the article I’ve visited is Bates. Others are close by so have an outing for the fall!

I can’t say any of the names featured in the Histrionic Series were familiar to me, although I did know who Lincoln’s three opponents in the 1860 election were.

I’m surprised at how many celebrities of the past are so totally forgotten now. It makes me wonder which of today’s celebrities, if any, will be remembered in 100 years.