Postcards tell us stories. We can trace our twentieth-century history through views; we can watch the evolution of our tastes, our values, our ideas. But for all those postcards can tell us about our past, they reveal very little about the men and women who designed or published them. Finding information about postcard artists is difficult because their names and personal histories have been irretrievably lost. Publishers are even more elusive.

Sometimes, though, we get lucky. Some years ago when a preliminary version of an article I wrote on the Ottenheimer firm appeared in the Monumental Bulletin, the quarterly publication of the Monumental (Baltimore) Post Card Club, I received a telephone call from Allan T. Hirsh, Jr., president of Ottenheimer Publishers. Mr. Hirsh is the grandson of Isaac Ottenheimer who, with his brother Moses, founded the firm of I & M Ottenheimer.

Mr. Hirsh invited me to look at two albums of original photographs which were used to make postcard views of the Baltimore and Washington area. In the albums were some of Ottenheimer’s Woodrow Wilson’s Inauguration Day series – apparently a set that was one of their most successful efforts. 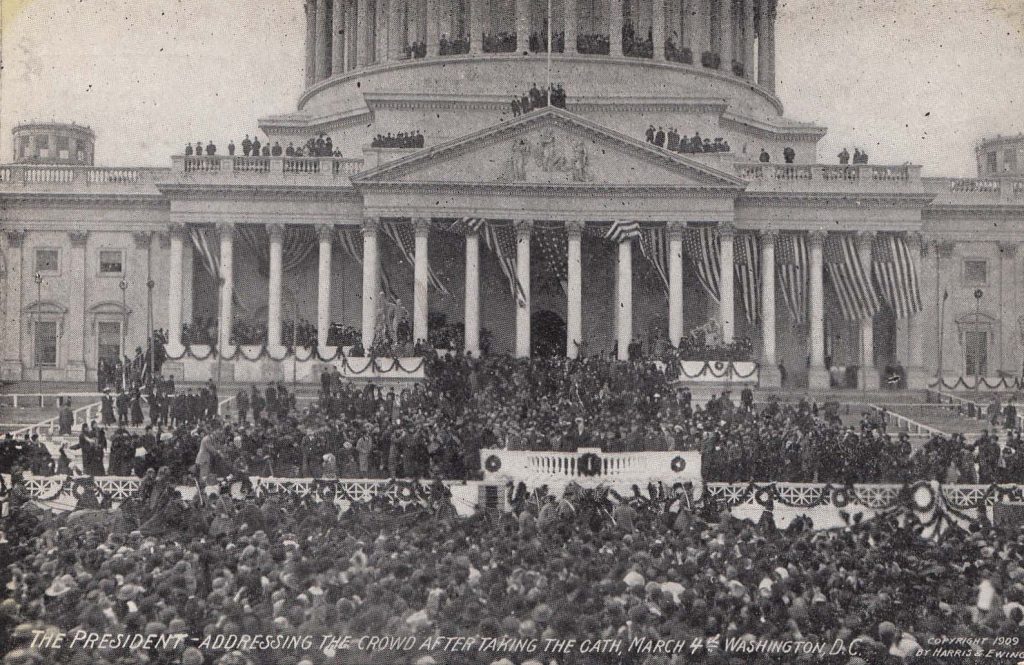 We spent a delightful afternoon looking at the albums and then when I started to get my photographic equipment from the car, Mr. Hirsh insisted that I take the albums home with me to use at my leisure. Over several weeks I studied the photographs to see what could be learned about the early postcard days of the Ottenheimer firm. From the few things which survive and from what Mr. Hirsh was able to tell me, we can piece together some of the history of the two brothers and their business.

Isaac Ottenheimer was born in Richmond, Virginia, in 1872. When he was about four months old, his parents moved to Baltimore. Isaac attended Eaton and Burnett’s Business College in Baltimore and did some journalistic work for three Baltimore daily newspapers. When he was 19, he and his brother Moses, then 14, founded I & M Ottenheimer. From the outset the brothers were stationers and booksellers. Although they did a small retail business, they were essentially wholesalers to the bookselling trade. Isaac was the traveling salesman and Moses was the general manager based in Baltimore.

Among the titles carried by I & M Ottenheimer were collections of jokes, which were edited by the brothers often under the pseudonyms Irv and Moe Ott. Among these small paperback books was one with the title The New Red Hot Joke Book Containing a Choice Assortment of the Latest and Funniest Jokes, Monologues and Comic Sayings.

Moses had no children; Isaac had two daughters [Ellinor and Sadie], one of which joined the business. Both brothers died in the early 1950s [Isaac in November 1953 at age 82; Moses in March 1952 at age 75], but the company continued operations by their descendants. Mr. Hirsh’s son Allan is the fourth generation in the publishing business.

I & M Ottenheimer were booksellers and book publishers. Postcards were a small sideline. The brothers contracted with various printers to produce cards which they then wholesaled to retail outlets. The early color cards were imported from Germany; Myron Thalheimer of Baltimore apparently printed the black and white views. Some of the original photographs have been labeled. One example is from Acmegraph Company, Chicago; the majority of the other cards were done by Curt Teich. Mr. Hirsh remembered that many of Teich’s traveling salesmen were also photographers and whenever they first arrived in town, they would ask “what’s new” and then go and photograph it.

No records of Ottenheimer’s postcard business survive but a couple of conjectures seem reasonable. The majority of their views are of scenes in the Baltimore area. However, there are also views with an Ottenheimer imprint from as far west as Monongah, West Virginia, and as far northwest as Tyrone, Pennsylvania. I would also guess that cards from outside the Baltimore-Washington area were probably limited to black and white issues.

The Making of a Postcard

The original photographs in Mr. Hirsh’s possession shed some fascinating light on the way in which a photograph became a postcard. 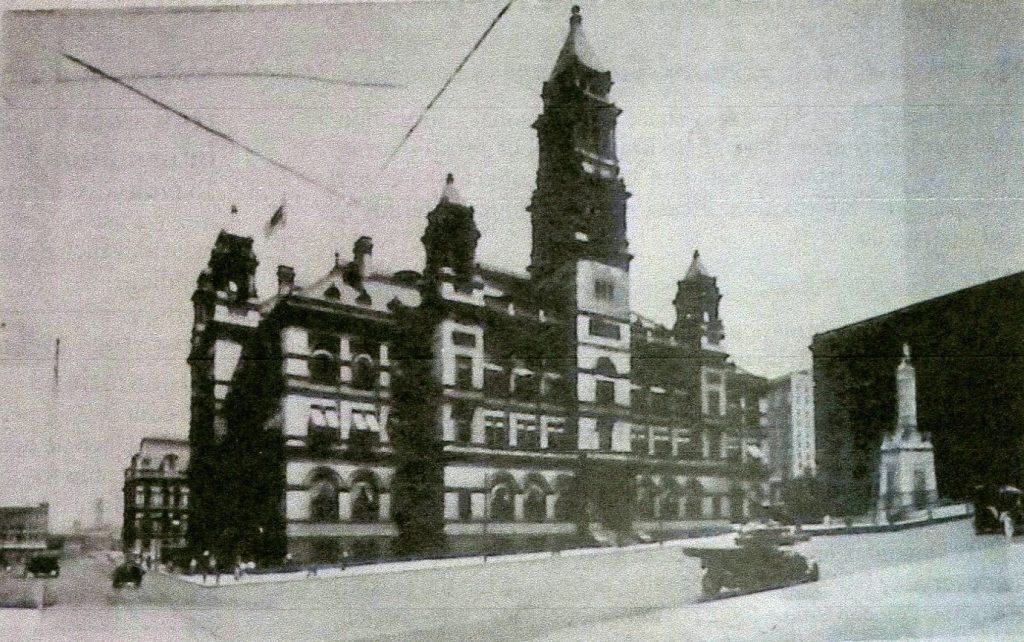 This original photograph (greatly reduced in size) was the photo from which the postcard Post Office, Calvert, Fayette and Lexington Streets, Baltimore, MD was made. The photograph, mounted on stiff, thick cardboard, measures 8 by 12¼ inches and carries the credit line of Hughes Co., Baltimore. The large size of this photograph is probably unusual since most of the postcard advertisements for views request photographs in the 5 by 7 inch or 6½ by 8½ inch range. The obvious advantage of such a large photograph is that it allowed the printer to retouch sections of the view more easily. In this case several changes are visible. 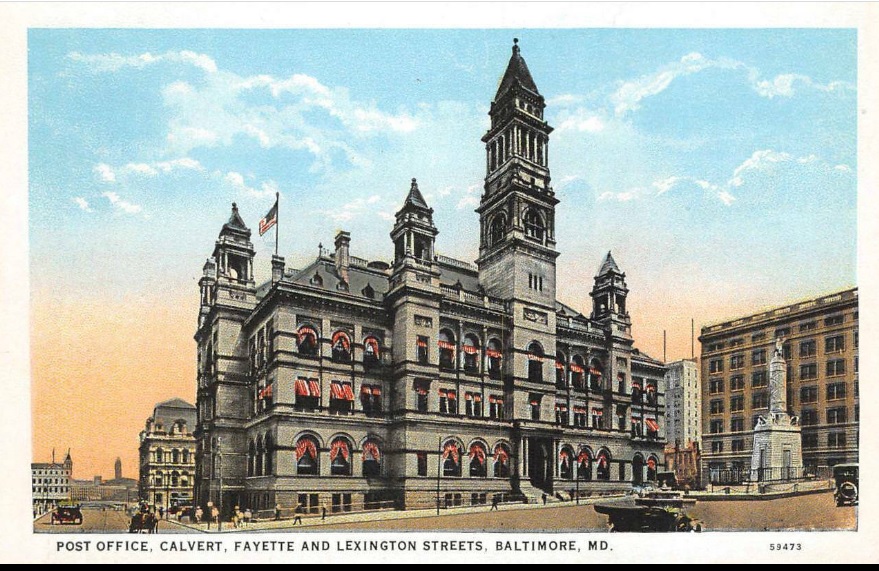 Some of the changes are cosmetic, designed to make the view more attractive. For example, the overhead electric wires have been removed and the road has been retouched to make it a smooth, plain surface. In the process a man with a two-wheeled pushcart has been removed from the center foreground—just behind the parked automobile. The flagpole and flag on the top left of the building have been drawn in.

Even more interesting are some major changes: small pieces of photographs have been added to either end of the central view. On the right, the monument is not actually a photograph at all but a hand-drawn sketch. The automobile, cut in half on the finished card, is a cut-out from another photograph.

On the left-hand edge, the building at the end of the receding street in the original photograph has been retouched to bring out its general structure.

The original Curt Teich work order that was pasted to the back of the photograph included these special directions, “Bring out flag—Show bldg complete, do not cut off any—see attached photo for shape of monument.” Print 10,000 cards.

The final product is a colored issue white border. One can’t help to notice that on the original photograph the sky is completely clear, so the printer has added the standard set of puffy white clouds to complete the scene.

The I & M Ottenheimer Company was typical of hundreds of local postcard publishers who flourished during the height of the American postcard craze. Few of these businesses survived or even prospered for long. Consequently, public records of these publishers are scarce.

[Editor’s note: This article first appeared in a 1983 issue of the American Postcard Journal. Please consider this fact as you read.]

Professor George Miller, University of Delaware, an accomplished collector and a frequent contributor to a national postcard magazine, has granted Postcard History permission to republish his writings from the 1980s and ‘90s. We are proud to offer his work to our audience. His postcard history lessons are timeless!
PrevPreviousDog Bites Tail
NextThe Men and Women of the – USPS Legends of the West SeriesNext
3 Comments
Oldest
Newest Most Voted
Inline Feedbacks
View all comments
Russ - Uff da!

Great history and interesting to see how a photograph is greatly edited and ultimately becomes a postcard.

This “Right Brothers” lighter than air machine at the beginning of this article is so fabulous…What a great article and kudos to Postcard History for asking permission and republishing this and others by Professor George Miller. He is a giant in our postcard collecting world. Thanks so much.

I once bought a c. 1906 joke book at a postcard club auction, but don’t remember if it was published by the Ottenheimer brothers.