Adventures that Feed the Soul

The idea that there are adventures that feed the soul comes from an expression used throughout New Mexico to encourage tourists to visit historic sites made of adobe. Since adobe is basically dried mud, it naturally fits best in arid or sub-arid climates. Every kind of building could be built with adobe bricks, but for some reason churches seem to hold their architectural character much longer than other structures.

Adobe as a building material is by composition 98.8% dried mud. A small percentage (1.2%) of organic material such as grass, straw, and lime is included to serve as a binder, since it is the grass that holds the shape of the dried brick and slows the formation of cracks. The adobe brick grew in popularity because of its low cost, especially in English regions where Spanish heritage was dominate – like the American southwest.

Some of the most durable and well-weathered adobe structures (both sacred and secular) are in the state of New Mexico. Among the secular buildings are Fort Union, near what is now Watrous, New Mexico, and the Kit Carson Home and Museum in Taos.

Fort Union sits along the Santa Fe Trail, just over 100 miles northeast of Santa Fe. As the mid-19th century pioneers left Franklin, Missouri, on their journeys to the southwest, one of the most welcome sites along their route was Fort Union. It was built entirely of adobe in 1851 and served as a frontier post until the Army abandon the fort in 1891.

Kit Carson’s home is in Taos, New Mexico, a three-minute walk from the Taos Plaza. It was built in 1825, like the fort of all adobe brick. The structure was home to Carson, his wife and seven of their children.

If you like to tour religious structures for historical reasons there is a virtual banquet to choose from in New Mexico. It is for no particular reason that the following churches are being highlighted.

At Acoma, New Mexico, is the “Old Church.”

In the west central highlands of New Mexico is an area known as Acoma Pueblo Reservation. Today, the several villages of the reservation have a tribal (Navaho) population of just over six thousand. Officially the 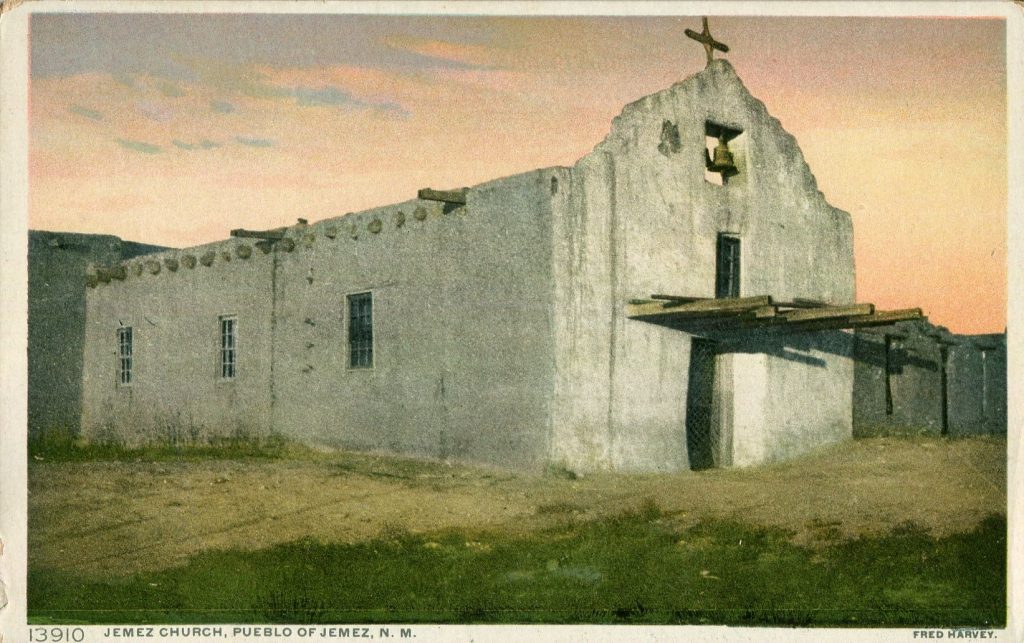 Old Church is the San Estévan del Rey Mission Church. It is a Spanish mission built between 1629 and 1641. It is one of the finest surviving examples of Spanish style colonial architecture. Its namesake was Saint Stephen I of Hungary.

At Jemez, New Mexico, just 118 miles northeast of Acoma on the edge of the Santa Fe Forest is the 17th-century Spanish colonial mission called San José de los Jémez. An interesting aspect of the mission is that the walls were built with limestone and covered with adobe. The remnants of the walls are 110 feet long and it may be the largest church of its era. 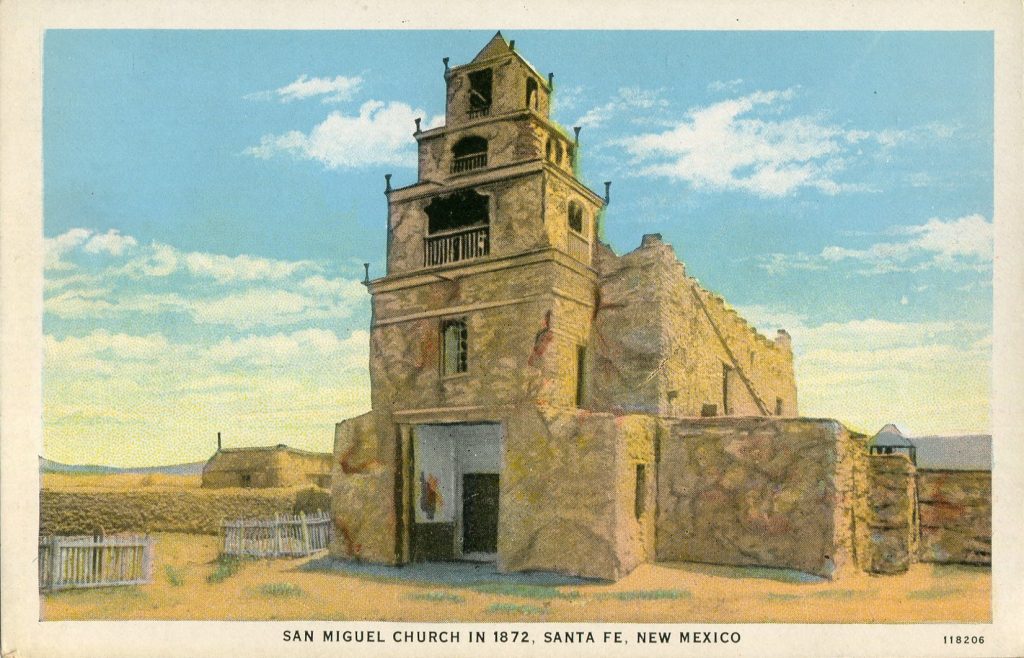 The San Miguel Chapel in Santa Fe, New Mexico, is another Spanish colonial mission built in 1610 entirely of adobe. In some circles it is referred to as the oldest church in the U.S.  The church has been renovated twice in its four-hundred-year history, first in the 1690s, again in 1710. There is a wooden statue of Saint Michael that dates from 1709. 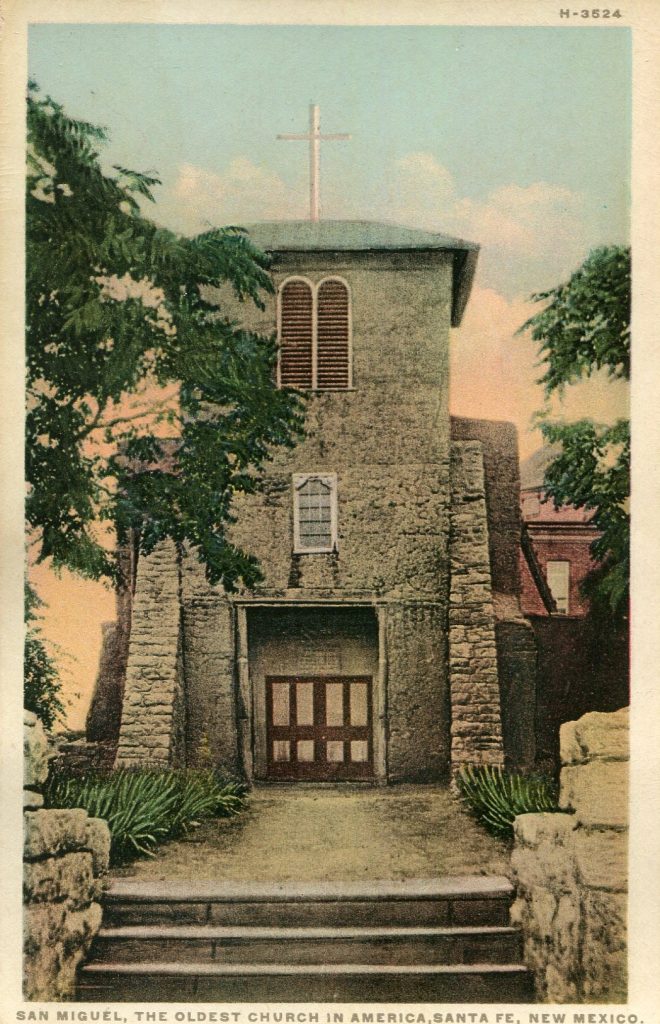 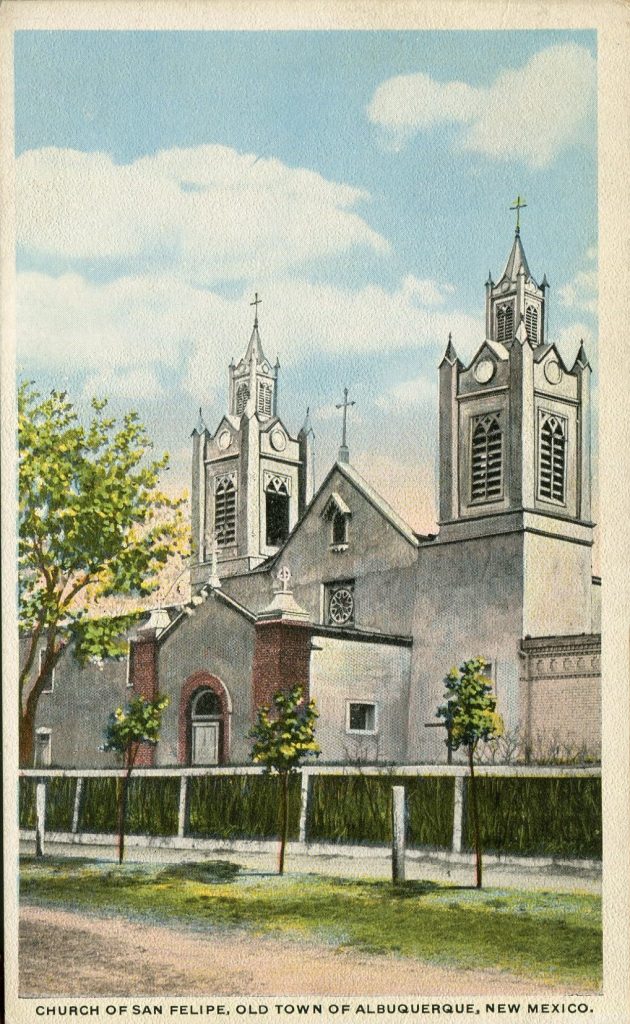 The Church of San Felipe in Albuquerque, New Mexico, was established long before (1706) the present church was constructed in 1793. The second church had a more sophisticated design than the older one. The newly designed structure was more like European churches and had two bell towers. A rectory (often called a “convento”) was added for the Franciscan friars assigned to the parish.

The old mission church in Santa Cruz, New Mexico, is an appropriate location to end this adventure. Santa Cruz is part of the Santa Fe metro-area, but it has a history of its own. When the Spanish explorers arrived in this north-central area of modern New Mexico in the 1540s they found a thriving population of Native Americans who spoke Tewa. They were the descendants of a people later described as the Ancestral Puebloans or the Anasazi.

The sequencing of the area’s history is set into four periods: Colonial, Mexican, Territorial, and Statehood. The aspects of life in the colonial era were much the same everywhere. The Mexican era began in 1821, when Mexico’s independence from Spain brought sweeping changes in the south, but life in Santa Cruz remained unchanged except for a deluge of new laws and administrative changes.

The arrival of the American Army under Stephen W. Kearny in 1846 ended the twenty-five years of Mexican rule in New Mexico. Rebellion and discourse were the stages on which many experienced a growth period due to the arrival of the railroad in the 1880s.

From the mid-1890s to January 6, 1912, when statehood was achieved, many parts of New Mexico exemplified the wild west in the worst interpretations of the term.

Today the two-million-plus residents of New Mexico enjoy an extremely high standard of living. It is so in Santa Cruz as well as the other cities where the communities have maintained their social traditions and history because of the Catholic Church and those who practice the faith.

Fun with anagrams: Kit Carson’s home could be termed an “adobe abode”.

This is a very interesting article. Thank you for sharing your research.