How to Write a Postcard Biography

Understanding the seven basic components of biography is the first step in learning how to write biography and family histories on almost any level. In the 1960s and ‘70s, “oral” history was quite the fad. People were genuinely interested in how their ancestors remembered their lives. Historical interests have changed significantly in the last forty years and personal history has come to the point at which the narrative is only important to new generations unless it appears in short and, readable in a three-to-five-minute blurb.

Basics: name, birthplace, education, marriage, children, and more.
Family History: parents, siblings, grandparents, and older ancestors.
Lifetime Changes. How has the world changed since you were a child?
Family Life. Name something your child did that surprised you. Why do you live where you do?
Career. When you were a child, what did you want to be when you grew up? What was your first job? Why do you do what you do?
Travel & World Experience. Where were you when you first thought, you may like to live there.
Personal Life. Who had the most influence on your life? What did they do? What was the most important piece of advice you have ever received?

Training oneself to write biography is not easy, but with a little practice, driven by a genuine interest, anyone can do it. Forward is the best direction, but first, step #1 is to read the “Components of Biography” sidebar.

It is not a goal here to have this turn into a didactic monolog, but after you read the “rules” of biography return here for two examples of how to formulate a questioning routine based on a method that has been used for more than sixty years.

The tried and true, decades-old method is the Historical Dinner Party. The dinner party approach to good biographical writing is a method designed to gather facts and learn quality points about the subject. Based on the psychological theory that people are most comfortable talking about themselves at a dinner table. It is then that your spoon, knife, or fork become your defensive weapons. If, when asked a question, you wish to give a respectable answer, a mouthful of food is just enough buffer to mindfully create an answer.

The historical dinner party is not intended to be a parlor game, although it could easily turn into one. It could be called, “Truth or Lie?” Otherwise, it is a serious learning exercise.

If your role is that of the Party Host, you must choose a subject or subjects. Limit your guest list to two individuals who have one thing in common, e.g., nationality. The guests could come from any historical setting, but for a compatible conversation it would help if both guests came from a time-period during which it would have been possible for them to have met or at least to have known some of the same people. 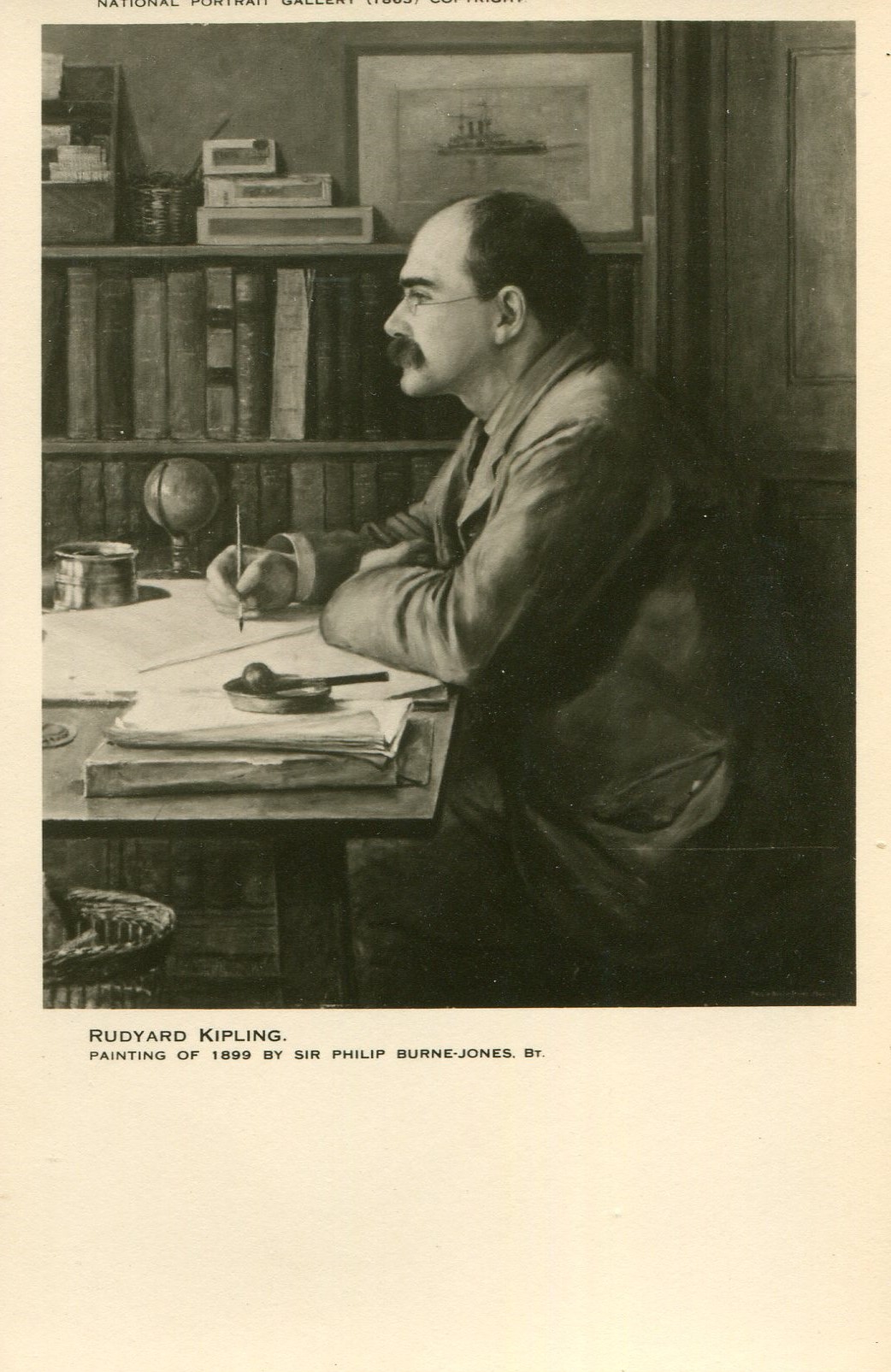 For this lesson let’s choose 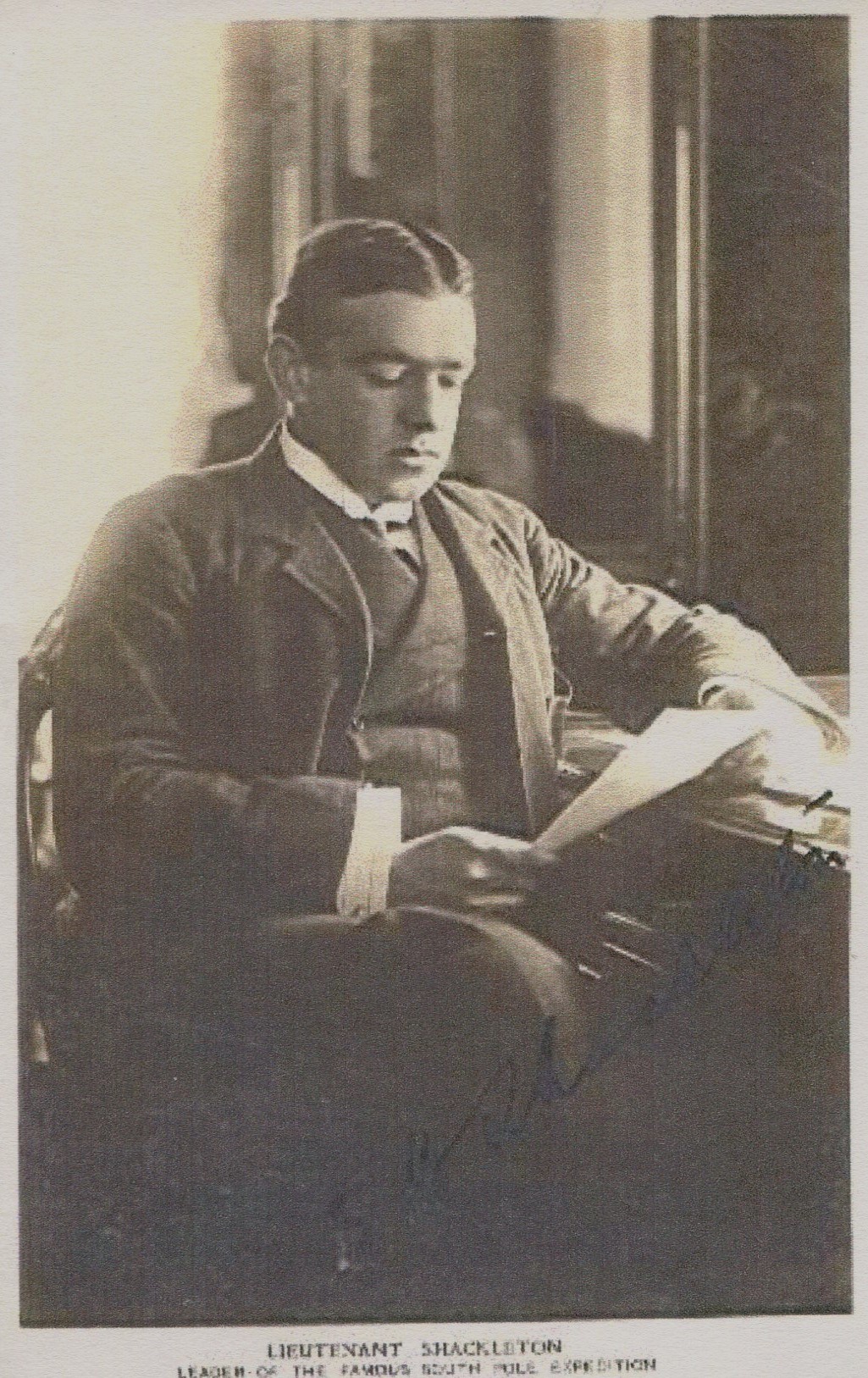 [The postcards here are both British issues. The Kipling card was printed for the National Portrait Gallery, London, by B. Matthews (Photo Printers) Ltd., Bradford, England. The caption under the photo reads: Rudyard Kipling, Painting of 1899 by Sir Philip Burns-Jones. The Shackleton card is a signed real photo on CYKO photo paper with a standard divided back. The caption reads: Lieutenant Shackleton, leader of the famous south pole expedition.

The photo date of Lieutenant Shackleton is unknown but can be narrowed to a day between when the Nimrod Expedition returned to England in 1909 and the death of King Edward VII on May 6, 1910. Ernest Shackleton served in the Royal Navy from 1901 to 1907 at the rank of lieutenant. He would have been entitled to be addressed by the last rank he held until King Edward knighted him. Shackleton’s later service in the Royal Navy Reserve, from 1917 to 1919, was as a major, but having received a knighthood, he likely preferred the title, Sir. There are accounts that while on sea-duty and during expeditions, Sir Ernest asked his staff and crew to call him, Boss.]

Now, what kind of a scripted conversation can we create, using what we’ve learned, from the seven components of biography to bring these men back to life in a postcard biography?

There is a rather hardy knock at the host’s front door.

Kipling: Thank you for the invitation, I understand I am to be written about in a postcard biography.

Host: Yes, that is true, do you have any objection?

Kipling: No! Who will read it?

Host: the readers of an internet blog entitled Postcardhistory.net.

Here would be a long dialog on what the internet is and what a blog is.]

There is another knock at the door.

Shackleton: Yes, we met at a London pub in 1899, he was having his portrait painted by a friend of mine, Sir Philip Burne-Jones.

Host: Wonderful, allow me to re-introduce you.

Kipling: Hello, Shackleton, it’s been years, how have you been?

Shackleton: Well, except for the heart attack I suffered in 1922. I was only 47.

Shackleton, aside to the Host: Should I tell Kipling, I’m dead?

Host: No! Let him assume that.

Host: We have now gathered, shall be dine?

Shackleton: Is there an aperitif?

I wonder how Kipling would feel about his “Jungle Book” having been turned into an animated Disney musical in 1967, some thirty years after his death.

I couldn’t get past Shackleton and dinner party! Ewww!