Are You Ready for Some Football?

[Editor’s note: Last year during football season, Dan Hennelly asked the readers of Postcard History the same question. His article was well received. Now we are pleased that Dan has sent us a sequel – what follows is “Are You Ready for Some Football Part II.]

“Are You Ready for Some Football?” asks Hank Williams Junior’s iconic song, All My Rowdy Friends Are Coming Over. I thought Postcard History’s readers would enjoy another trip across the United States to view college football stadiums captured on postcards. The postcards date from the 1930s through the 1960s.

Pitt Stadium was the home of the University of Pittsburgh Panthers and also hosted the Carnegie Tech Tartans (now Carnegie Mellon University) from 1929 to 1943. Pitt Stadium opened in 1925 and seated 69,400 fans. (Although the postcard states the stadium held 74,000 fans.) It cost $2.1 million to construct. Like many 1920s football stadiums, it was built due to the rising popularity of the college game. In the sport crazed 1920s, teams began developing a fanbase beyond their students and alumni, and some schools, like Notre Dame, had a national following.

A renovation after World War II, dropped Pitt Stadium’s seating to 56,500 as seat size was increased for more fan comfort. The stadium met its demise in 1999 and Pitt now shares Heinz Field with the Pittsburgh Steelers. From 1958 until 1969, the Steelers played at Pitt Stadium before moving to Three Rivers Stadium.

Seating 107,601, the University of Michigan Stadium in Ann Arbor is the largest stadium in the United States and the third largest stadium in the world. Nicknamed the “Big House,” every Wolverine game since November 8, 1978, fans have exceeded 100,000. The 2013 game against the University of Notre Dame attracted 115,019. According to the NCAA, 24 of the 25 college football games with the greatest attendance have been played in Ann Arbor.

Built in 1927, it originally seated 72,000. Fieding Yost, the school’s athletic director, planned for future expansion, the stadiums footings could have supported a stadium seating 150,000. Modeled after the Yale Bowl, the stadium’s size is deceptive since most of the stadium is below ground level. Capacity was expanded to 85,752 in 1928 after the dedication game for the stadium against Ohio State attracted a standing room only crowd of 84,401. Seating was again expanded to 97,239 in 1949 and 109,901 in 2010, before settling at its current capacity in 2015. In 2007, the stadium underwent a $227 million renovation and expansion that added 83 luxury boxes and 3,200 club seats. The stadium only cost $950,000 to build in 1927, but spectators sat on wooden bleachers. In 1930, it became the first college football stadium with an electronic scoreboard for keeping the official game time.

Michigan State University’s Spartan Stadium (nicknamed the Woodshed) in East Lansing opened in 1923, with a capacity of only 14,000. In 1936, seating was increased to 26,000 due to a grant from the New Deal’s Works Progress Administration. Additional expansion projects over the decades have increased seating to 75,005. In 2005, the stadium added 24 luxury suites and 800 club seats at a cost of $64 million. Spartan Stadium initially cost $160,001.

In 2001, an ice rink was constructed at mid-field to host the season-opening hockey game between MSU and its cross-state rival, the University of Michigan. A world record crowd for a hockey game, 74,554, watched the “Cold War.” The game started a trend toward holding hockey games in large outdoor stadiums.

A chrome postcard captured Band Day at Michigan State University’s Spartan Stadium. According to the caption on the postcard, 3,000 musicians from thirty-five high schools participated in this annual half-time spectacle.

Memorial Stadium at the University of Illinois Champaign-Urbana opened in 1923 and cost $1.2 million. The name honors the university’s students who died in World War I (the dedication later included World War II casualties.) Its original capacity was 55,524 and the original horseshoe shape was copied from Harvard Stadium. Various renovation projects increased seating to over 70,000 but later projects have reduced capacity to 60,670 in order to improve fan amenities. A 1984 game attracted a record crowd of 78,297 as the Fighting Illini defeated the University of Missouri. During the 2002 NFL season, Memorial Stadium was home to the Chicago Bears while Soldier’s Field was demolished and rebuilt.

Nicknamed the Sea of Red (fans wear Nebraska’s red to the games), the University of Nebraska’s Memorial Stadium in Lincoln opened in 1923 and its initial seating capacity was 31,000. The stadium’s name honored World War I dead including the team’s former captain, Dusty Rhodes. Later the dead of World War II, Korea, and Viet Nam were honored. Expansion projects have increased capacity to 85,000 but game attendance often exceeds 90,000. The Cornhuskers have sold out every game since 1962.

Band Day at the University of Nebraska is the theme of this chrome postcard from the 1960s. According to the university’s website, Band Day started in the 1930s. At its peak Band Day drew sixty bands from across Nebraska and Iowa. Due to rising demand by paying customers for seats, the university discontinued Band Day after 1971.

Baylor Stadium (later named Floyd Casey Stadium in 1988), home of the Baylor University Bears, opened in 1950 and was in use for sixty-four football seasons. It cost $1.8 million to build and seating capacity was 50,000. Baylor University replaced it with McLane Stadium in the 2014 season. The stadium’s attendance record was set by the last game played in the stadium when Baylor defeated its arch-rival the University of Texas, 30 – 10 on December 7, 2013. The Bears moved to their new stadium in 2014 and their former home met the wrecking ball in 2016. This chrome postcard dates from the late 1950s based on the cars parked around the stadium.

The University of Oklahoma’s Memorial Stadium opened in 1923 and cost $293,000. Initial seating capacity was only 16,000. It was named in honor of students and university employees killed in World War I. The stadium was renamed the Gaylord Family Oklahoma Memorial Stadium in honor of a generous benefactor to the university. Several expansion projects over the decades have increased seating to 86,112 making it the 22nd largest stadium in the world and the 13th largest college football stadium in the U.S.A. A 2017 game against Texas Christian University set an attendance record of 88,388.

This white border postcard shows the stadium’s configuration after 1929 when permanent seating was added to the east side of the stadium. The playing surface was named Owen Field in the 1920s to honor the schools football coach and athletic director who was the impetus behind the stadium’s construction.

Daniel P. Hennelly is a mystery and science fiction writer from Norfolk, Virginia. A retired university administrator, he has collected postcards since his 1960s boyhood. He specializes in vintage United States postcards. Also, he has an extensive collection of foreign cards he started after receiving a gift from a 1930s honeymoon tour in Europe.
PrevPreviousA Digital Catalog on Postcards of the Pandemic
NextThe S. S. Palo Alto – Ravaged by the SeaNext
9 Comments
Oldest
Newest Most Voted
Inline Feedbacks
View all comments
Thomas X Casey 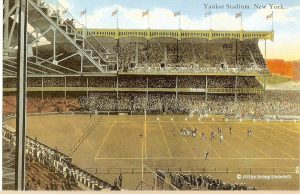 Great article! I’ve often said that, other than Durham, Pasadena is the only town to have hosted the Rose Bowl. Three weeks after Pearl Harbor, the Rose Bowl was moved to Durham where Duke had to borrow bleachers from UNC and State College. We even had a Rose Bowl Parade down Main Street. Oh and the Devils lost to Oregon State.
(More recently, COVID again pushed the Rose Bowl off the West Coast.)
More @postcardsfromdurham 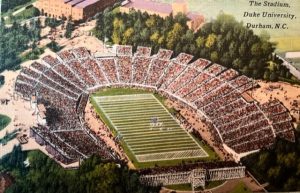 I have a third article in the series planned for next football season. Duke and other Southern schools will be featured.

Awesome. Already looking forward to it! Thank you for this work.
~John @postcardsfromdurham

Interesting article. One nitpick: the Chicago Bears play their home games at Soldier Field, not Soldier’s.

Thank you for the correction. I have several postcards of Soldier Field and my include it in the next article in the series next year.

Great article. There must be dozens of stadia which have or had the word Memorial in their name. The one I remember most fondly is Memorial Stadium in Baltimore. It was the home of the Colts and Orioles, but I expect it hosted the occasional college game.

Memorial Stadium in Baltimore occasionally hosted games for the Naval Academy and the University of Maryland – College Park.

I jumped the gun saying I READ your article. The lead said 1930’s to the 1960’s. I mentioned about the OSU horseshoe & the Big House being built in the 1920’s. Thank you for a fine article. Looking forward to the next. ☝🏻🇺🇲✌🏼