The Joy of Finding
One Single Postcard

The artist may well have thought that seascapes should be painted with watercolors. With that in mind imagine my delight when earlier this year I found a Tuck postcard, here in California, that reminded me of a painting I bought in 1971 for just £300. 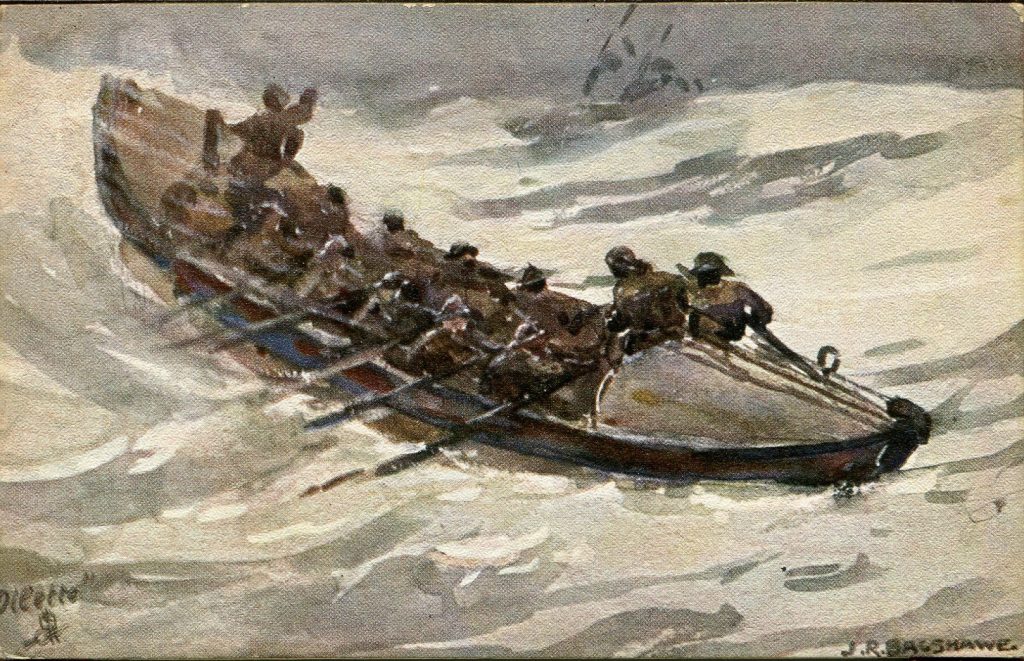 I recognized the signature immediately, but I was thrilled to see that it was a Tuck postcard since that gave me hope that there would be a six-card set some place in the world and I would be able to find it. The Tuck database confirmed my suspicion and I have a new priority-list.

The events in the United Kingdom during the calendar year of 1870 would easily fill several history books. To name only of few things that changed the world: in March the first international football match was played between England and Scotland – you Yanks, call it soccer – that’s okay.

In April the first chapters of Charles Dickens’s novel The Mystery of Edwin Drood, appeared in serialization, (sadly he died in June and it was left unfinished). Just a few months later there came the first competitive examination to enter British civil service.

On August 2, the Tower Subway was opened under the River Thames. Two days later the Red Cross of Britain established a society to aid the sick and those wounded in war. Later in August, the White Star Line launched its first ocean liner (RMS Oceanic) at the Harland and Wolf shipyard in Belfast, Ireland.

And to help make my point, Joseph John Ridgard Bagshawe was born on July 1, 1870.

This story is seldom told, for there are so many facts and so little space, but succinctly put, Bagshawe is a favored Victorian era marine painter. I discovered his work in Cornwall in the summer of 1971. The painting was a monster – 48” x 62” – but the price was right. I bought the painting but had to make arrangements to have it delivered.

There was only one room in my home with a wall large enough to hang such a masterpiece, but with the help of two neighbors, it was hung and I enjoyed it every day for forty-one years. Lady Luck smiled on me just three weeks before I moved to California, I was able to sell it to a London art dealer. And, may I add that the sale garnered me a very handsome profit.

J. J. R. Bagshawe was born into a very artistic family. His maternal grandfather was the noted history painter Clarkson Stanfield. There is hardly a British textbook devoted to  Lord Nelson and the battle of Trafalger that doesn’t show Stanfield’s painting, The Battle of Trafalgar is a masterpiece that depicts ships-at-sea in clouds of smoke highlighted by muzzle flashes.

Bagshawe was educated at Beaumont College, St. Augustine’s in Ramsgate, and the Royal Arts College in London. Because his talents in most genres were that of “master” while still a “student,” he was asked in 1901 to join the Staithes Art Club as the founding secretary.

Bagshawe left London in 1896 and relocated to Yorkshire. He married Mildred Turnbull soon after. His love of the sea developed from his relationship with his father-in-law, Thomas Turnbull, a shipbuilder from Whitby. He was so enthralled that he often set sail with the fisheries fleet and later bought a small yacht to sail and paint on farther shores.

Regrettably at this time there are no primary sources available to confirm the date of Bagshawe’s death. As is so often the case, one website copies, without checking for accuracy, another website. Hence, I can but report that Wikipedia has listed Sunday, January 10, 1909 as his death date at age 38, but across the page in the same article, Bagshawe’s death is stated to be November 1, 1909 at age 39. I suppose we should be greatful that they agree that he died as a result of diabetes.

The other five cards, as seen on the Tuck database website are: 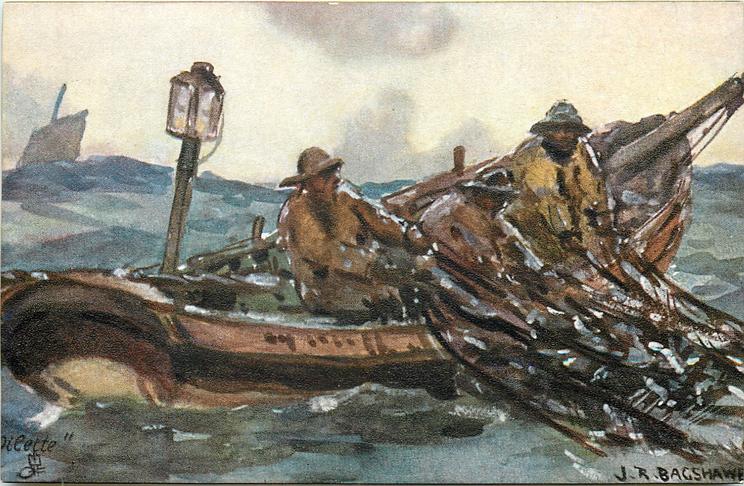 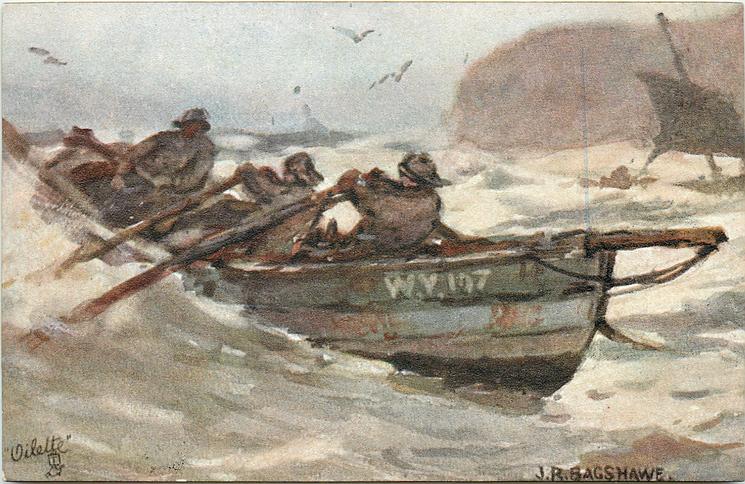 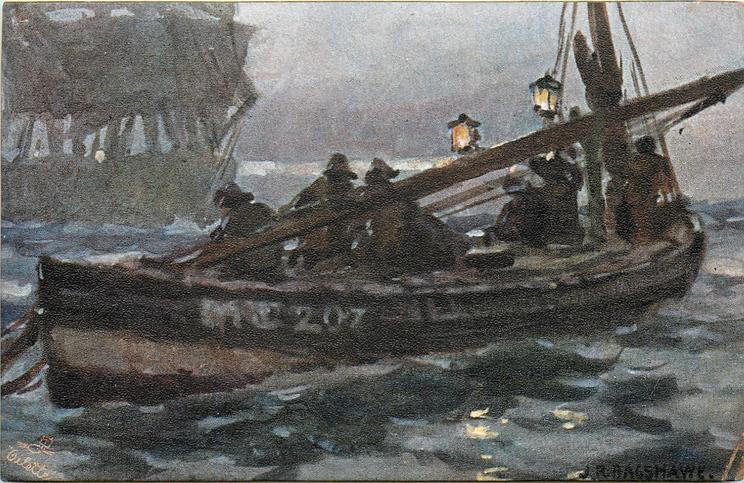 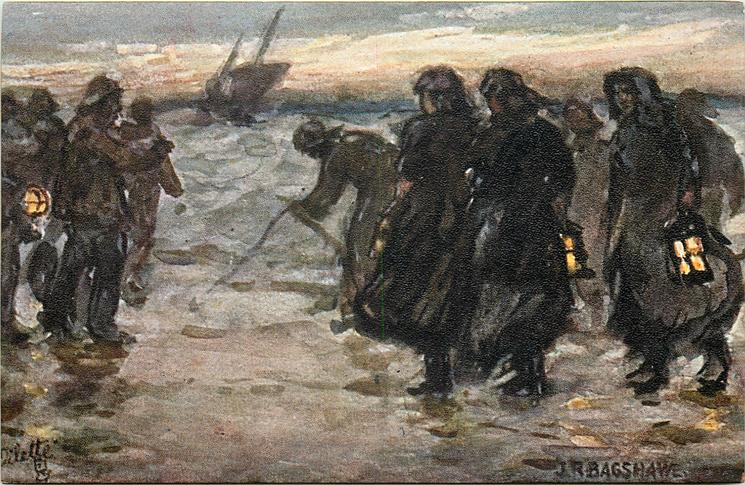 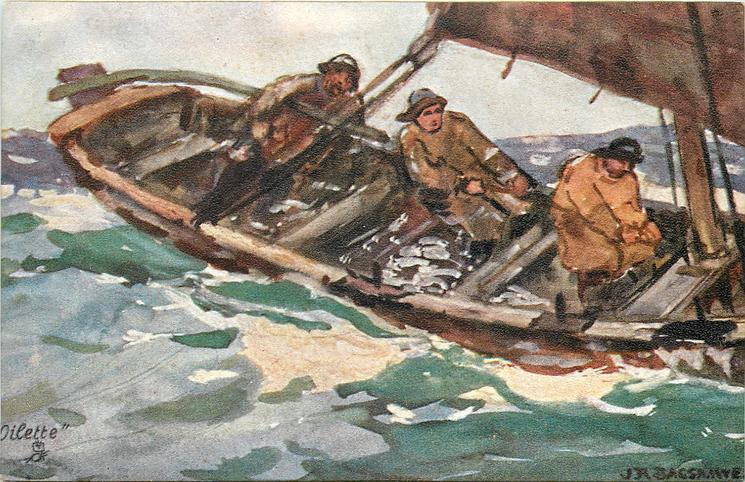 In the Teeth of the Gale

George “Burt” Martin loves to travel to the member countries in the Commonwealth of Nations. He has visited eleven of them. Burt relocated to California after retirement, but he hails from a small market town in the Cotswolds of England where he lived in a house that was built in 1639.
PrevPreviousThe S. S. Palo Alto – Ravaged by the Sea
NextAll About BooksNext
4 Comments
Oldest
Newest Most Voted
Inline Feedbacks
View all comments
Oliver B. Pollak

Fascinating. A worthy story. Tales of the sea and art. I hope you find California a comfortable as the Cotswolds.

That source gives the location as Whitby.

Here is a scan from the England & Wales, National Probate Calendar (Index of Wills and Administrations), 1858-1966.(scan attached)

Although it didn’t involve Britain, the start of the Franco-Prussian War is the event I associate with 1870.