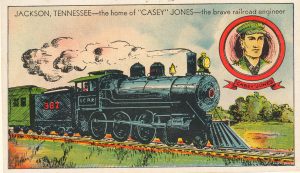 John Luther Jones was born March 14, 1863, first worked on a railroad in Kentucky and at age 25 had enough seniority to join the Illinois Central. Opportunities for advancement were good at ICRR and records show Jones was promoted to engineer on February 23, 1891 and his name first appears on the register book of the Brotherhood of Locomotive Engineers on March 10, 1891. Read the story of that tragic night in April 1900 when Casey Jones became a man around whom a legend grew.