Give Chrome Postcards Some Respect

Chrome era postcards are the Rodney Dangerfields of postcard collecting, they get no respect. Generally they are unpopular with dealers and collectors. The dealers prefer the older cards because of their collectability and collectors like them for reasons best expressed by the words, educational, informative, historical and interesting; words that apply because the collector simply can’t remember when they were new.

Chrome postcards have their name because Eastman-Kodak of Rochester, New York, developed a film they named Kodachrome. The film was most frequently developed into glossy surfaced color prints. It is generally accepted that Chrome Postcards got their name from the film used to produce the photographs on the cards. So shiny became synonymous with glossy.

Mostly, Chromes fall into a category of “Remember, when.” You have often heard someone at a dealer’s table look at a chrome postcard and say, “For heaven’s sake, my mother had one of these!”

The one advantage of collecting chrome cards is that they are much more affordable. Their interest to the collector will vary with each individual. For some collectors, the interest in a chrome card could be historical (all things considered, a forty or fifty year old collector will see a 50s postcard much differently than a sixty or seventy year old). On the other hand, for some collectors new far outweighs old. Those are the collectors who fancy the modern “rack cards,” which open lots of windows on the culture of today. Just as the cards of long ago decades did in the 90s, 00s and beyond.

Dolores Rowe, a long-time dealer from Pennsylvania, offers some examples of chrome cards that advertise products we baby-boomers remember and are wont to say, “My mon had one just like this.” 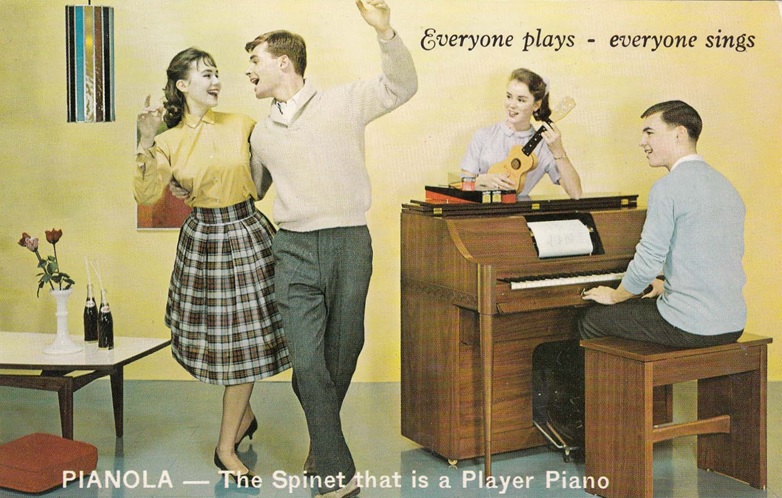 Household goods and appliances are among the most common products found on chrome advertisers, and home entertainment ranks high on the list of easy to find cards. Remember, the “Pianola,” an instrument that everyone can play even if you have never had a lesson in your life! These teenagers seem to be having a good time. Note the girl with the ukulele and the bottles of “pop.” Were these examples of what we now call product placement?

In which world did Mr. Cleaver leave for work each morning as Mrs. Cleaver waved from the kitchen doorway bedecked in a crisply ironed house dress with a pearl choker? Would she damage her fresh manicure before sending Beaver and Wally off to school or would it happen later in the day? Only in that world would it stand to reason that in the evenings the Cleavers would relax in their stratolounger recliner still attired in their work (?) clothes. 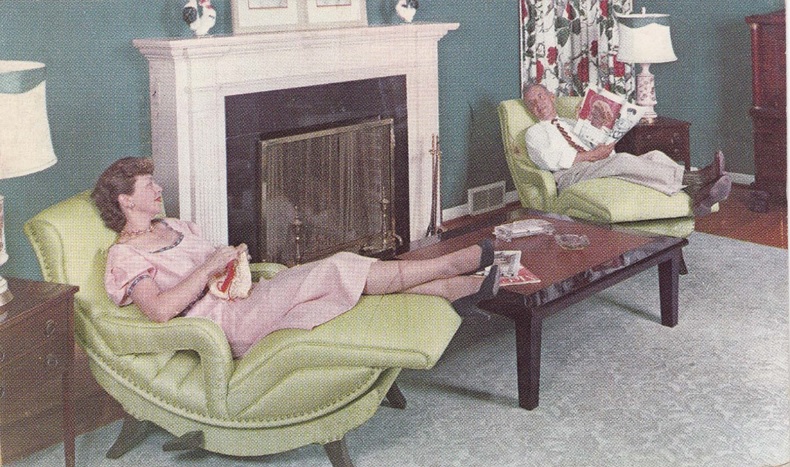 The Toy Parade- Leave it to Beaver 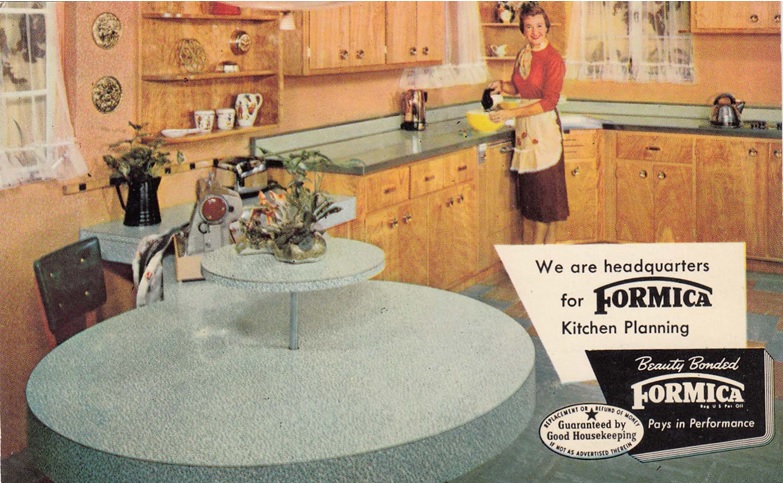 The Life of Riley Theme

If none of that was true about your 1950s neighborhood, perhaps it was Chester A. Riley who lived next door, where he would surely have made his wife’s life a lot easier when he had Formica installed, that was guaranteed by Good Housekeeping.

While he lived the Life of Riley, she could bake cookies on her new Formica topped counter, table or kitchen island. Mrs. Riley’s Formica was sold at Hutchinson Bros. Inc. in Columbus, Ohio..

Oh, wait, what would Mrs. Riley’s kitchen be without a genuine, 1954 Shelvador refrigerator? She must have given Riley the word to get rid of the old icebox and buy a new ‘fridge’ with that fancy trigger-action latch.

Do you remember the Nelsons? What were their names; they were such a nice family. I remember the day that Harriet, yes that was her name, told Ozzie that she wanted new pink fixtures in their bathroom. 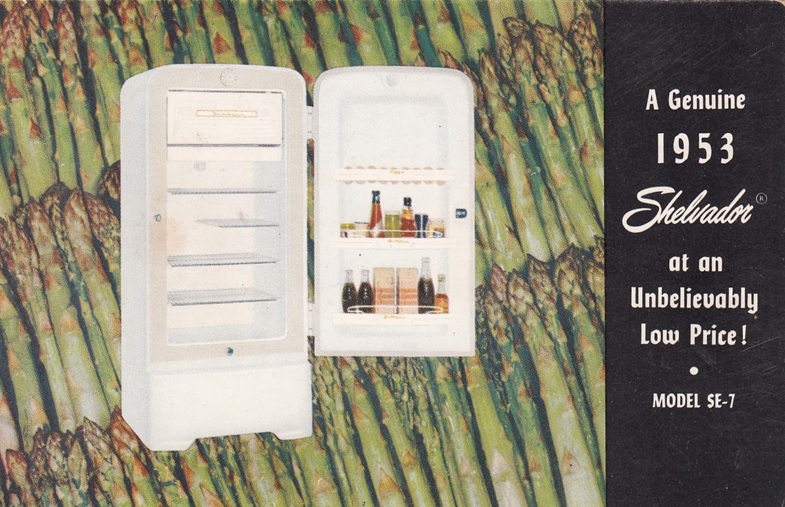 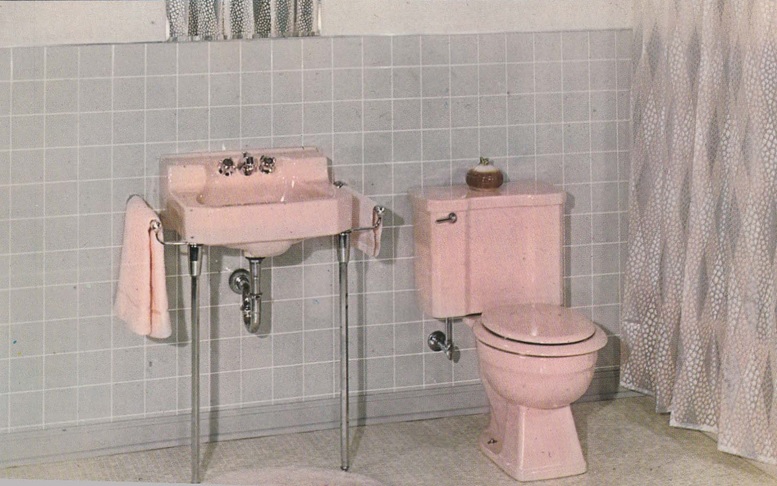 Wow, did she ever start something. The boys who came over to play with Ricky and David told their moms about Mrs. Nelson’s new toilet, then, all at once Clara Randolph wanted the Spring Green model, Miss Edwards wanted the Autumn Yellow one, but Doc Williams’s wife waited until the following year when Mansfield and Company made the Deep Blue Sea version.

Most manufacturers did not wait for word-of-mouth advertising. They mailed brand new chrome postcards to: Resident at Any number on Any Street, in Every Town, USA.

Nearly everything you could want was advertised on chrome postcards. If you wanted a fur covered bathroom scale or flowered toilet tissue a company like Borg-Erickson Corporation in Chicago sent you a postcard.

Or maybe your son wanted bright red boots and a wagon that matched.

And at last, have you seen a band-wagon that the automobile industry didn’t jump on? General Motors, Chrysler, Ford, Studebaker, AMC and nearly every other manufacturer sent tons of postcards to their dealerships for summertime mailings advertising the new models. 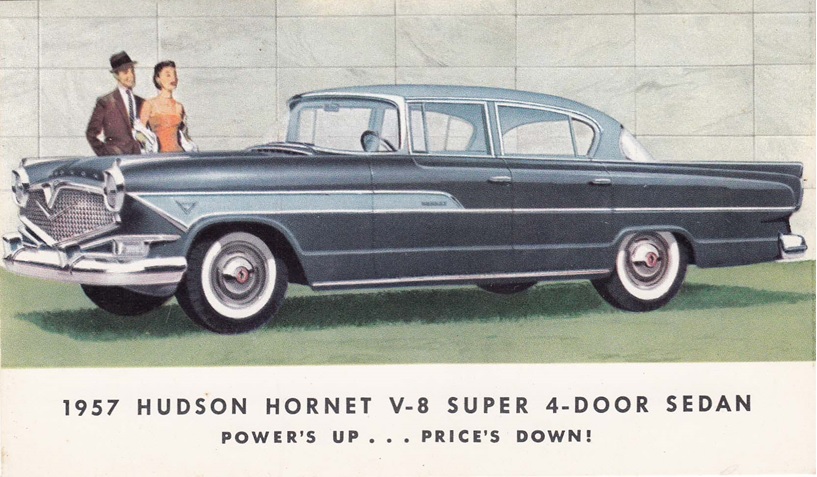 Wow!  Get a good look at those great two-tone paint jobs.
How could you resist the urge to drive home a brand new car?

Remember, the new cars were always due at a dealership near you in mid-September. The TV always said, “Coming to a dealer near you.” I could never figure out how they knew where I was.

In the 1950s, it was no longer the case that Henry Ford pitched, that you could have a new Ford in any color as long as you wanted black.

So . . . for a trip down memory lane or a study of long-ago decades, check out those chrome postcards you have been disrespecting.

Dolores Rowe has lived in Kennett Square, Pennsylvania since 1967.  She started collecting postcards in 1969 and within a few years she became a dealer as well.  She has authored or co-authored three books using postcards of her home area, Chester County, Pennsylvania.  Her collecting interests include state views, holidays, and topics including real photos of multiple births and real photos of American Christmas trees.  Dolores has presented programs on postcards, Santa Claus figurines, and tips on telling if an item is vintage and has put on displays of both Santa Claus figurines and postcards in the local library.  She has also worked for a local law firm as an estate appraiser for over 35 years.  Her original career was teaching which she retired from after 30 years.

Ellie McCrackin is a pen-name used by one of America's foremost archivists. Preferring to remain in the background, Ellie ghost writes for some of the leading world historians. She loves postcards and loves to write about the stories they tell.
PrevPreviousBig Birds
NextIt isn’t déjà vu, but I guess it’s close.Next
7 Comments
Oldest
Newest Most Voted
Inline Feedbacks
View all comments
Ellen Richardson

This is a great article, so interesting, especially with the musical links to theme songs of the time.

Great article. About 35-40 years ago I had a friend who had a large collection of Delaware cards. Every time I went to the beach he had me bring him chrome cards from the different beach towns. He said these cards would be valuable some day. Many people want cards of the things they remember when they were kids.

Chrome cards are indeed very collectible now just as they were in 1939 when an oil company made a set showing attractions from all over the United States. Actually Ford made the comment about black cars in about 1910 and to make his model T more affordable and less complicated they were indeed all black until 1926 when he again reluctantly began to offer different colors for the model T that was still in production. Thanks for sending me this post and I would be happy to subscribe to your publication and perhaps be your automotive specialist as that is… Read more »

Hello, as a long time collector of automobile related postcards I was curious about a card I saw in your first and this issue about chrome postcards. It showed a postcard of a dark blue 1950 Chevrolet sedan delivery and I had never seen it before and wondered if it was available or in the authors inventory for sale. I don’t know who wrote the article and whose card was illustrated but I certainly would be a buyer for that card. I am enjoying each issue and can’t wait until your cards wanted and for sale is operational. We badly… Read more »

I also enjoy chrome postcards, and I really love the oversized linen and chrome postcards as well. My Home Town collection of views from Wichita, Kansas have a stuffed three ring binder that needs to be expanded to two binders for my top loader pages of mostly chrome oversized advertising views. These tend not be liked by postcard dealers because they do not fit into their boxes, but THINKING DEALERS like our Hewitt’s Antiques shop in downtown Wichita, they appreciate the oversized too, and often add to their stock and selection.