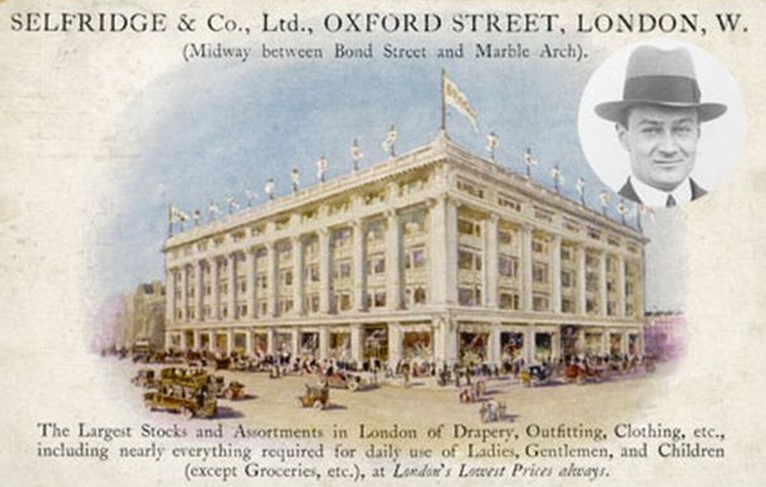 In the years between 1909 and 1941, Harry Gordon Selfridge walked through the front doors of his shopper’s emporium every morning to shouts of “Good Morning, Mr. Selfridge.” Never prompted, the employees were happy to offer greetings to the man who made it possible for them to work in such pleasant surroundings.

Those years were difficult for residents of the United Kingdom. There were still periods of shortages, particularly coal and medical supplies. Political unrest after the death of Queen Victoria had paralyzed the country for more than a decade and there was talk of another war on the continent.

Selfridges never lost its edge with British consumers. High quality merchandise still sells well in the main store on Oxford Street and in several branches throughout the UK. Sometime in mid-century the Selfridge organization copied a competitor’s business model — the Sears & Roebuck catalogue. Today, the Selfridge version continues with their entire inventory available at the online shopping site www.selfridges.co.uk. 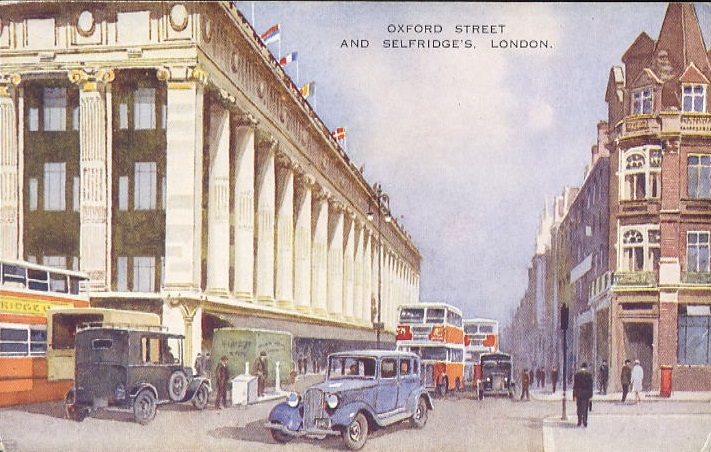 For the average Londoner of the early twentieth century, the store was as much an amusement park as it was a department store. Frequently Mr. Selfridge would invite theatre and cinema stars, politicians, and national heroes to be his guest in the gourmet restaurant on the store’s roof.

Londoners also had the opportunity to see the first plane to fly across the English Channel, they witnessed the first Milne-Shaw seismograph installed in a public building, and they were encouraged to buy ice cream from the first sundae boutique in London. When Londoners went to the roof they could play the first miniature golf-course in Europe, have lunch in a terraced garden, and then the ladies could go to the first all-girl gun club. Selfridge shoppers also witnessed the first demonstration of television in the UK. 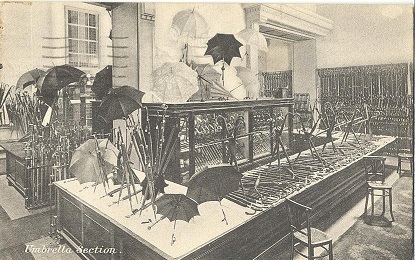 There simply was no merchandise Mr. Selfridge would not sell. It is fact that 6,000 umbrellas were available every day — buyer’s choice.

Oh, and yes, Selfridge sold postcards too. Here you see the post card counter and the thousands of cards available.

Card publishers common to our collections today, such as Bamforth, Tuck’s, Valentine, Wrench, and United were all available in racks where buyers could purchase single cards or sets. 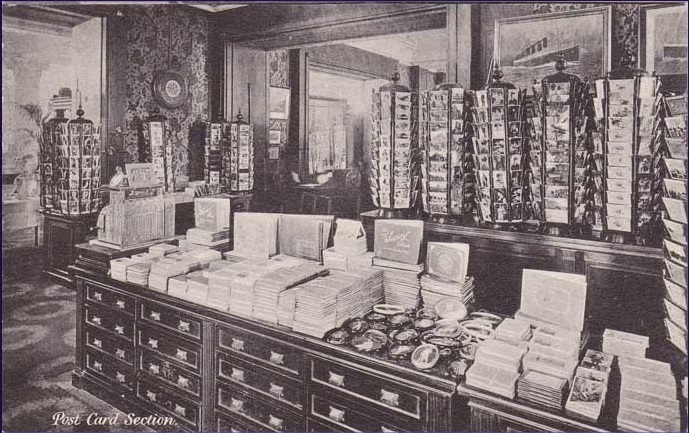 Other consumer services were available, such as a barber shop, a lady’s salon, a butcher shop, a pastry boutique, even a travel agency with destinations in Asia, Africa and North America on offer.

Christmas was a special time at Selfridge & Co. The decorated sales floors were fresh with evergreens and red satin bows. Christmas candy was given to children as they left the store and Mr. Selfridge himself often chose buyer’s premiums for those who made purchases in large amounts. It was at Selfridge & Co. that the first pre-Christmas sale was held.

The psychology of store design began at the Selfridge store on Oxford Street.  Since horses by the hundred were still in the streets of London in 1909, it is no surprise that the perfume section was immediately inside the front door.

Mr. Selfridge standardized merchandising, inventory control and accounting practices.  Customers were always the first consideration. Selfridge himself instructed the buyers of the store’s inventory — with no deference to where he sent them — to think of no one other than the customer and never to buy anything for the store that they wouldn’t buy for themselves.

This article appeared in an earlier form in the South Jersey Postcard Club’s McClintock Letter of December 2013, Page 1.

Ray Hahn is a retired educator, but he has never stopped teaching. His decades of researching, writing and editing a newsletter for the South Jersey Postcard Club has been a world-class education in trivia. In addition to postcard collecting, Ray’s other interests include history, genealogy, and touring the world with his wife Marie. Ray often advises his readers to "Join me as we explore the world one postcard at a time." Ray and Marie live in New Jersey.
PrevPreviousPunny Postcards
NextNobody Collects View FoldersNext
1 Comment
Oldest
Newest Most Voted
Inline Feedbacks
View all comments
Bob Kozak

Sounds like a great place to have shopped, or just visited, “back in the day”! Imagine being able to buy some of those now-rare postcards at their original prices…