Many years ago I bought two view folders from Bill Martin, a Maryland postcard dealer and patriarch of the Mary Martin Postcards Company. I made the purchase because of the neat stamps used for mailing. Being the promoter of postcard collecting that Bill was, he told me there were over 150 boxes of view folders back at his warehouse. He suggested I should come by and take a look sometime. I did so, several years later after Bill’s untimely passing. I was hooked! I’ve never looked back. That’s not all I collect mind you, it’s just a sideline, but a fun one at that. Am I alone in the pursuit? 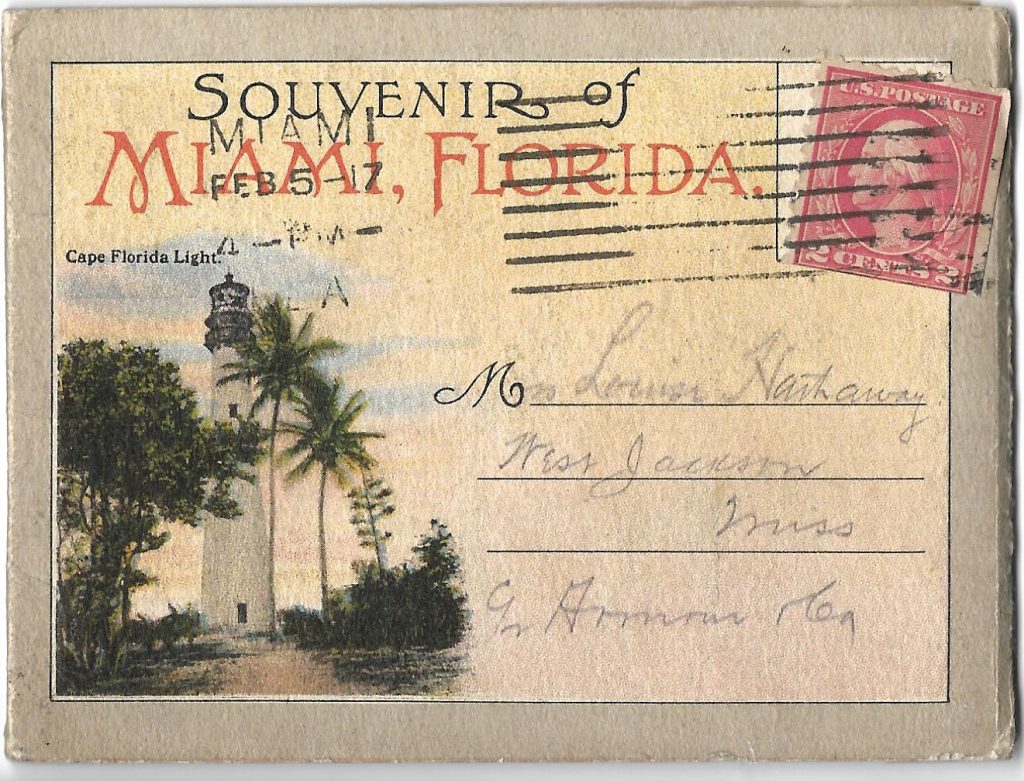 Earliest known use of a miniature view folder

Recently I found a small (4¼ x 3 inches) Curt Teich folder titled “Souvenir of Miami Florida.” It was mailed on February 5, 1917, but it has no printed numbers, letters or production data, just Made by Curt Teich & Co, Chicago, Ill, printed on the reverse. I wondered when Curt Teich first printed these smaller folders. Information on dating Teich postcards is available on the internet but not folders so I called the Curt Teich Postcard Archives when it was located at the Lake County Discovery Museum in Illinois. (The postcard collections of Lake County Museum have recently re-located to the Newberry Library in Chicago, Illinois.)

The person who answered my call was very professional and pleasant but could not answer my query. I wondered if they had archives of folders to check that could answer my question as to when the smaller versions were first printed. After all, they have over 500,000 postcards catalogued in their holdings so surely they also have Curt Teich folders.

She asked me to wait while she spoke to a colleague. Holding her hand over the phone I heard her call my question to a person some distance away and a male voice answered, “No, we don’t have folders in the museum. Nobody collects folders anyway!” I thought to myself, “Well I do!”

Folders are approximately 6” x 4½” booklets with an outer printed cardboard cover. They contain multiple views, often printed (one or both sides) on a long strip of paper accordion style folded or stapled as pages in booklet format.

These souvenir folders were meant to be sent through the mails and as such have a printed stamp box and address lines. Some folders and booklets have no address lines or stamp box, but each was sold with an accompanying envelope for mailing.

This is especially true for early souvenir albums as well as modern miniature flip folders. Folders usually have a space for a message inside that allowed for longer messages than a typical postcard and offered some privacy since the message was inside the folded cover. 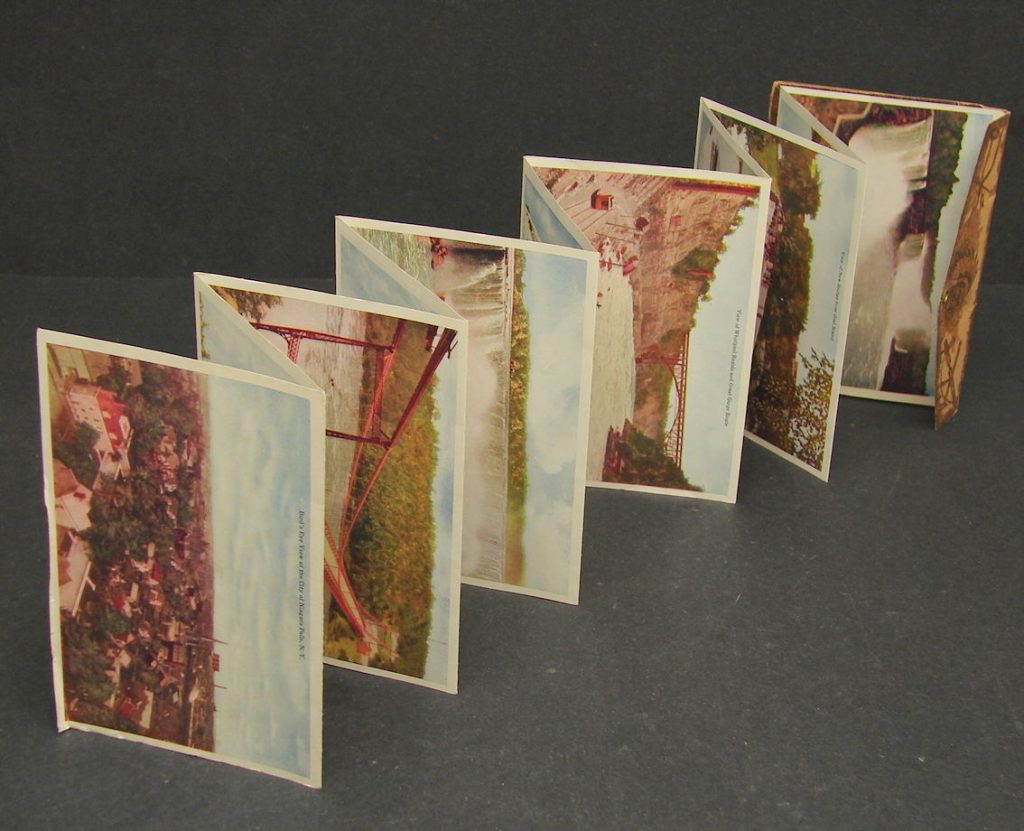 Folders are part of postcard history and as such are “collectible.” Folders were purchased as souvenirs by travelers either to share with others via mail or saved as mementoes. Folders usually contain the same images that can be found separately on postcards by the same publisher. As such the folder becomes a way of identifying cards that are part of a series. This adds to the challenge of hunting for postcards – trying to complete a series of views depicted in a folder.

In folders with many views you may discover that one or more of those views are elusive in postcard form. Indeed sometimes the views exist only in folder format simply because it would not be wise to leave blank pages.

Presently there is not a lot of collector interest in folders. There may be a number of reasons; folders are difficult to store and the inside images are not instantly available. There is often a mismatch between the visual quality of the folder cover and the inner views. Sometimes the folder cover is simple but has great graphic appeal while the inside images are poorly printed or just plain mundane. Other times the opposite is true. This is how it is with folders. Once you understand this you are ready for a fabulous journey. A chart of various folder types and their period of use is shown below. Many different publishers are found in each category. 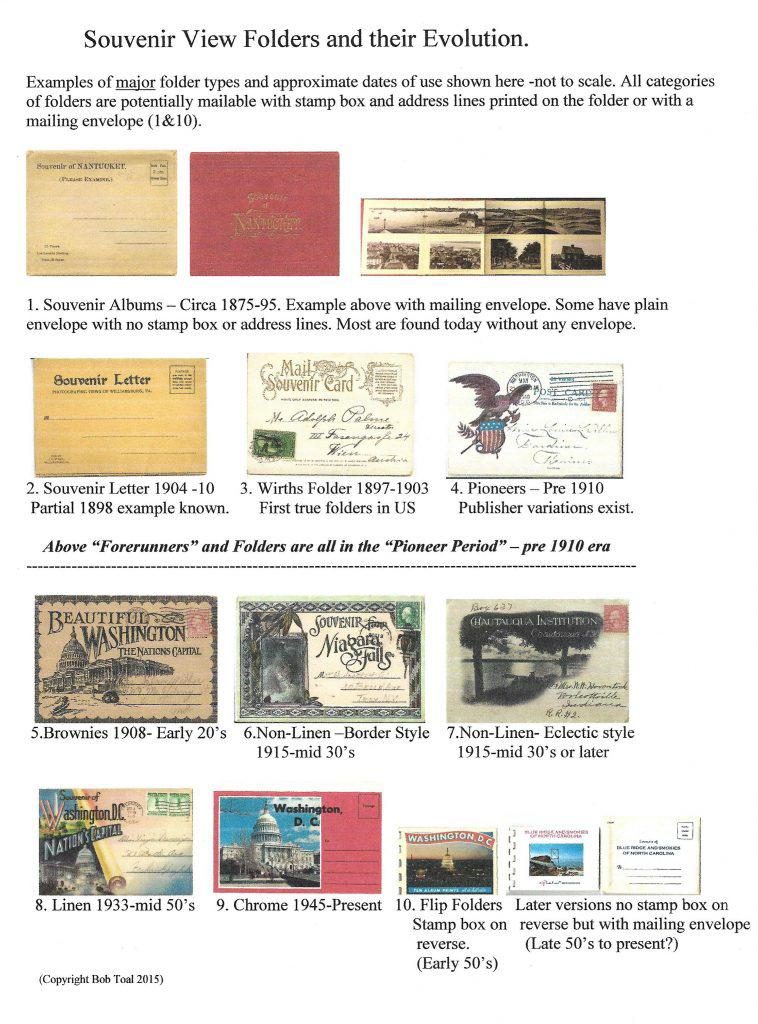 Folders are part of the complete gamut of the postcard hobby. As a genre, they have their own evolutionary story to tell and because of this make a great collectible. Just like postcards there are thousands of different folders, some are scarcer than others. It is only when you scrutinize them (inside and out) that you begin to distinguish the “commons” from the “gems”. Collecting various folders of a given geographic area is a great side line for a state or city/town collector.

Even topical folders including military, national parks, expositions, Indians, ethnic, Disneyland and others are available. You just have to look carefully. Collecting folders from a certain publisher or all folders from a given era or decade can be fun and challenging.

Best of all they are usually inexpensive, with prices from 25 cents to a few dollars. However some can be expensive ranging from fifty to one-hundred dollars or more. If you have an interest in folders simply start asking dealers to bring them to shows.

The first souvenir folders in the United States were copyrighted in 1897 by The Wirths Brothers with the earliest one known used May 3, 1898. These had plain outer covers with either two or four folded cardboard panels with black and white half-tone images. The city depicted was printed in a fancy font on the inside of the upper flap. After more than 25 years of collecting, I have over 30 Wirths folders of different cities including two Spanish American War camps. They range in dates of use from 1898 through 1906. An example of a four panel Wirths folder from Milwaukee, Wisconsin, is show above mailed with a ten cent stamp to Germany. 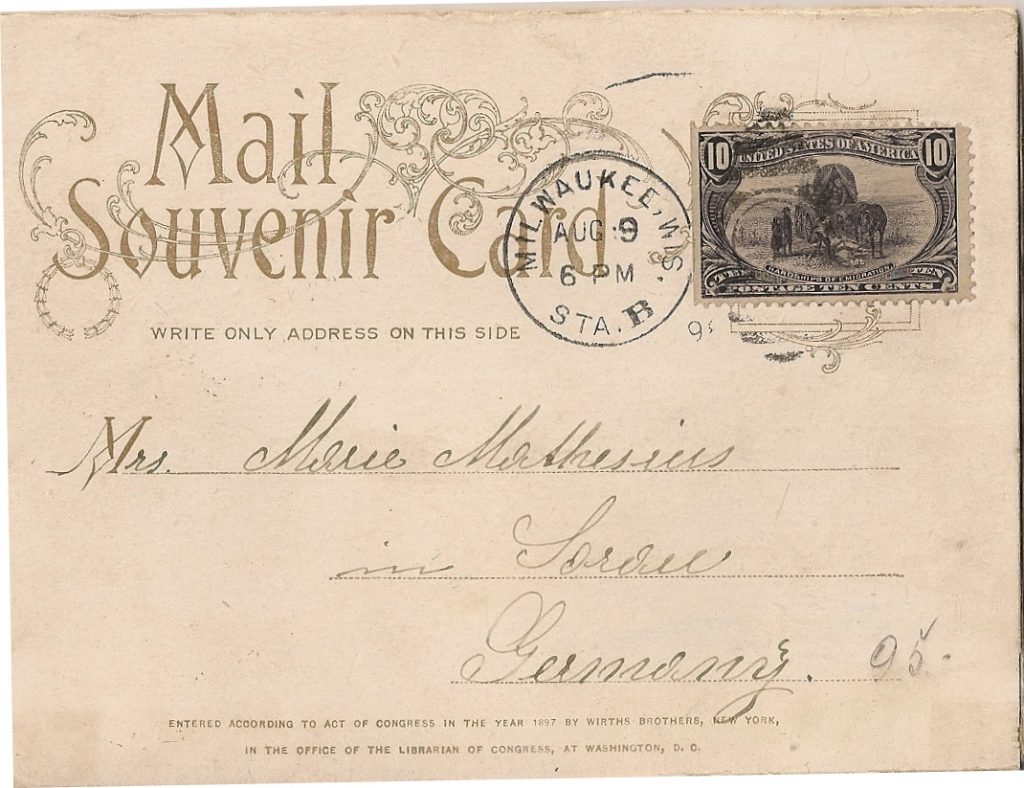 This four panel Wirths folder of Milwaukee, Wis. was mailed to Germany with a 10 cent stamp in 1898. The folder with written message inside required 10 cents to mail due to its weight.

Some Wirths folders have only two panels and could be mailed with a written message overseas for five cents. These folders are most often found mailed locally or abroad mailed with a one cent stamp (printed matter rate). The Mail Souvenir Card title in Art Nouveau script is shown. The inside panels have three or four grus aus style black and white images. These early folders are quite scarce and command a nice premium.

Below is an example of a Wirths Folder series, published by Walter Wirth in 1904, titled Children’s Christmas Letter Story and has stapled pages of a short story inside written by Charlotte Dodge Brombacher entitled Mother Bird. There is a series of these by Brombacher. I know of three but surely there are more. 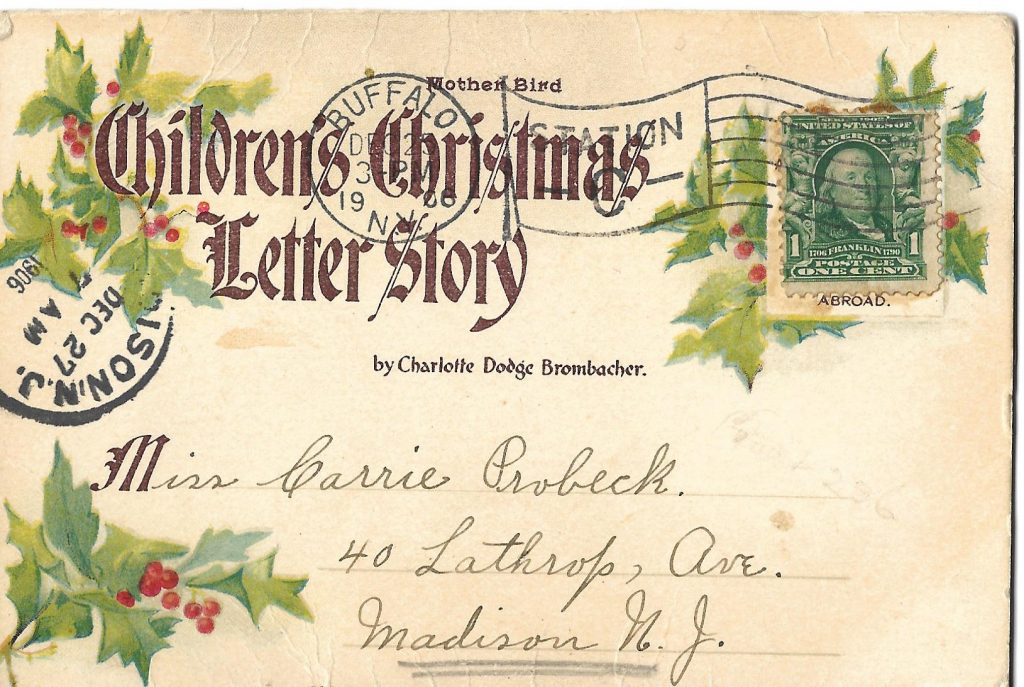 Bob Toal is an avid collector of postcard postal history targeting the birth and development of US postcards from their early beginnings to present. This includes early pioneer and private mailing cards as well as view folders, bi and tri-fold postcards, jumbo postcards and anything unusual in the postcard realm.
PrevPreviousGood Morning, Mr. Selfridge
Next“I Like Ike!”Next
13 Comments
Oldest
Newest Most Voted
Inline Feedbacks
View all comments
Ellen Richardson

So interesting! Things I never was even aware of.

60+ years ago, on a visit to West Point (USMA), I purchased a West Point postcard folder. Last year while digging through some old things, I found it. I opened it and a flood of memories washed over me as I viewed the scenes. No, I’m not a postcard collector, just someone that enjoys reliving the past…

As a collector of automotive related postcards I have found that the auto manufacturers used folder cards to showcase their factories and to also display a product line. I look forward to finding new ones to add to my collection.

yes, I have seen a real cool one from Ford – Boarder style – will keep my eye out also.

Please send me your email address. I have some jumbo sized Mule postcards I would like you to see. Thank you.

I actually do collect these.

Bob,
I’m wondering how this concept can be adapted for the digital age. How would you create or display a souvenir folder on a computer or iPad?

I collect folders as well as postcards. I have a number of linen folders from the late 1940’s. A friend of my grandparents was closing her apartment in the early 1970’s and moving in with her daughter. She heard I collected postcards and gave my grandparents a box of them. One of her children took a cross country car trip from NYC to California and sent folders back from her stops. I think folders reached their heyday during the linen postcard era. I rarely came across them in the 1960’s when I started collecting postcards as a boy.

Bob, I just found a Tri-fold card but of a very different format, more like a book. First (cover) page has Paris Le Cham de Mars on and when you open it, it is a tri fold – all written in French with the left page and right page describing the Champ de Mars and the “middle” page showing a picture of the Eiffel Tower in THREE black and white images (almost like negatives) laid upon themselves to present an image with “depth”. On the back of the third page, when folded in, it has == Correspondence == across the… Read more »

You’re definitely not alone. I collect them as well – not a huge collection, but I like to call it so. It all started when I was studying abroad 15 years ago and coming across these at flea markets (Europe). Little by little I tried hunting these down in antique shops (California), but I only came across postcards, not souvenir views or mini-postcards. Thank goodness for eBay, though, since it seems that they are mainly sold there!
Thank you so much for sharing your story and the history!

i have acquired a bunch of folders over the years along with postcards. The oldest shows a series of pictures of the San Francisco earthquake in 1906.