David Dwight Eisenhower was born on October 14, 1890 in Denison, Texas. His mother later reversed his given names to avoid confusion with his father David. In 1892 the family moved to Abilene, Kansas, which Eisenhower always considered his home town. The family’s circumstances made attending college (as had both his parents) problematic, so he and his brother Edgar agreed that one would attend college while the other worked for the tuition money,  then swap positions. Edgar took a second straight year, so Dwight continued working. A year out of high school due to an injury meant he was 21 when his turn came to go to college.

But the money for tuition wasn’t there, so he applied for admission to the Naval Academy and the U. S. Military Academy, which didn’t charge tuition. He was deemed too old for Annapolis but did win an appointment to West Point, from which he graduated in 1915 in the middle of his class. 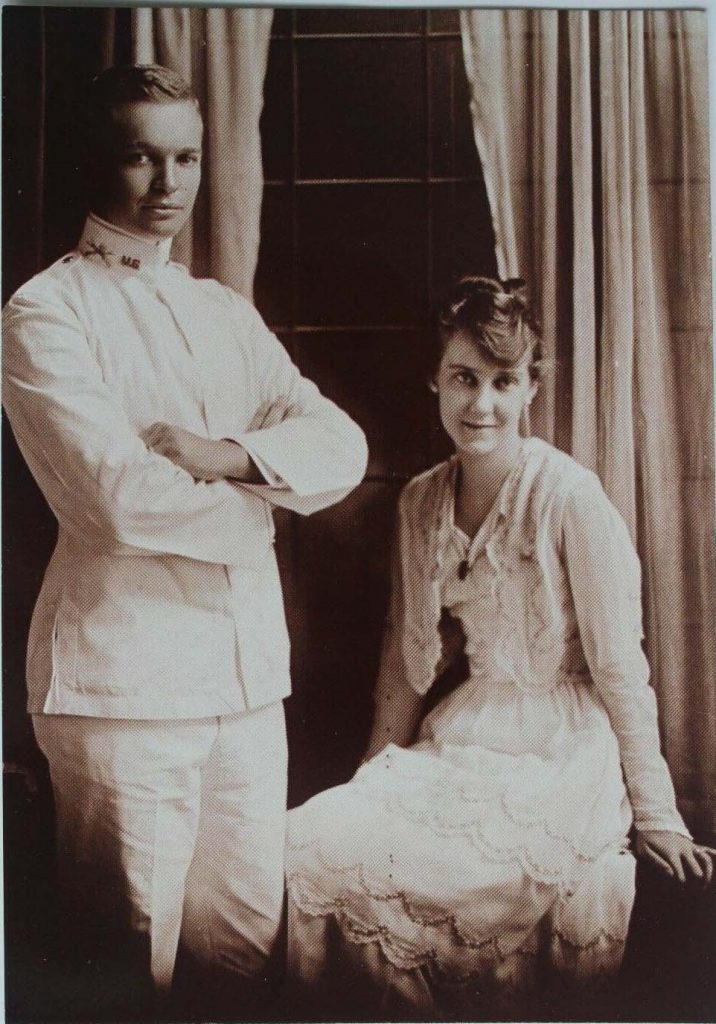 The storm clouds of forthcoming war led Eisenhower to request an overseas posting, but he was instead sent to a training station at Fort Sam Houston in San Antonio, Texas. It was there that he met Mamie Doud and they married in 1916. A series of home-front assignments followed and the war ended without him going overseas.

After the war, the Army was reduced in size and Eisenhower thought seriously of giving up his commission. He stayed, however, and gradually received more meaningful assignments, including to Fort Meade, Maryland, where he met George Patton and developed his belief in the use of tanks in battle. In 1922 he became executive officer to General Fox Conner and went with him to the Panama Canal Zone.

Eisenhower’s career in the shrunken Army seemed to stall during the late 1920s and 1930s. In fact, though, he was developing the skills and contacts necessary for leadership. In 1929, Eisenhower was sent to Washington as the executive officer for the Assistant Secretary of War. There he also served under Douglas MacArthur when the Bonus Army encampments in Washington, D. C., were dispersed. MacArthur took Eisenhower with him to the Philippines in 1935 and he worked to develop the Philippine military. Eisenhower returned to the U. S. in 1939 and began a rapid ascent as the Army planned for the coming war against Germany. A series of promotions led him to his first battle command, Operation Torch in the 1942 invasion of North Africa, and he subsequent commanded the invasion of Sicily and the Italian mainland in 1943.

Despite severe backbiting about his lack of personal battlefield experience from U. S., British, and French competitors, Eisenhower was named Supreme Commander of the Allied Forces for the invasion of Europe in late 1943. He was still that commander when victory in Europe was achieved in May, 1945.

Eisenhower succeeded George C. Marshall as Chief of Staff of the Army in late 1945 and in the ensuing two years he rounded out his internationalist strategic thinking about the role of America in the world.

In 1948 he left active duty to become
President of Columbia University and published his memoir, Crusade in Europe, that same year. 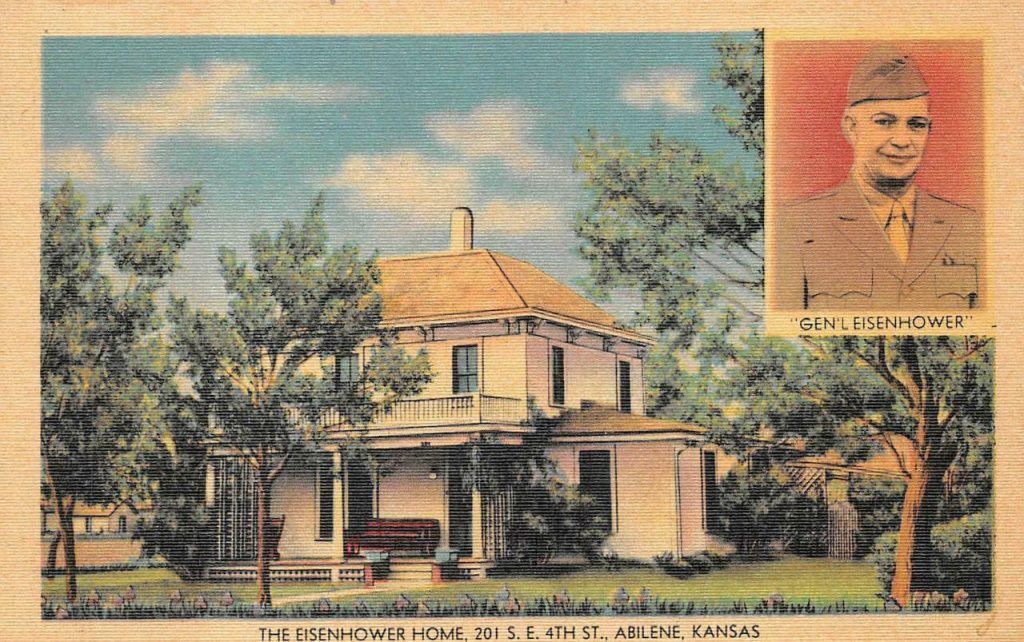 The $635,000 advance payment for Crusade provided Eisenhower with his first financial cushion, some of which went to the purchase of a 690-acre farm near the battlefield in Gettysburg, Pennsylvania. His tenure at Columbia was rocky as the faculty resented his frequent absences from campus on such responsibilities as forming the North Atlantic Treaty Organization (NATO), where he worked to create a unified military organization whose goal was to combat potential communist aggression around the globe.

Both political parties tried to recruit Eisenhower as their candidate for President in 1948, but he declined. In 1952, though, he became alarmed at the possibility that, with President Truman’s popularity waning, the isolationist wing of the Republican Party might elect Senator Robert Taft. He also had major differences with Truman’s foreign policy.

Eisenhower led Taft by less than 50 votes on the first ballot at  the Republican convention, but a series of delegate vote flips, led by California Governor Earl Warren, brought Eisenhower victory. Under irresistible slogans such as “Peace, Prosperity, and Progress” and  “I Like Ike,” he swept to a dramatic victory in November — an Electoral College landslide, 442-89. In 1956 he won with an even bigger majority, 457-73.

This link shows a 1956 campaign commercial and here are two unofficial campaign postcards. 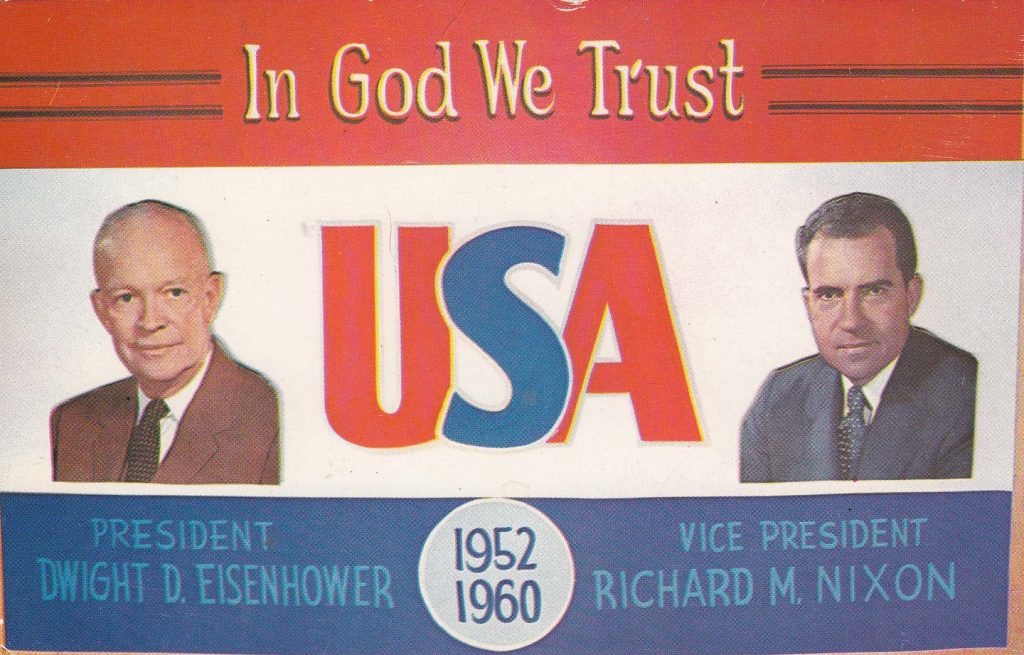 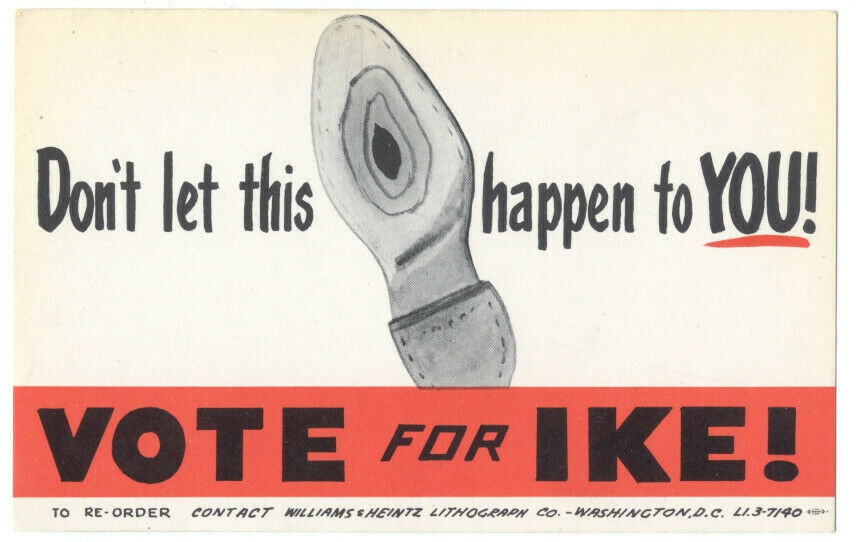 As the (relatively) placid 1950s gave way to the turbulent 1960s, public appreciation of Eisenhower’s administration took a hit. His frequent golfing vacations, his sometimes-rambling answer at press conferences, and his seemingly perpetual smile led many to minimize his achievements, forgetting that he took America out of the Korean War, launched the interstate highway system, nudged Joseph McCarthy out of the limelight, and continued most New Deal and Fair Deal programs while emphasizing a balanced budget.

After the Supreme Court’s unanimous decision against segregation was issued, he responded to obstruction at Little Rock’s Central High School by sending the 101st Airborne and federalizing the Arkansas National Guard to ensure that the school followed a federal judge’s order. Eisenhower also completed Truman’s desegregation of the armed forces. 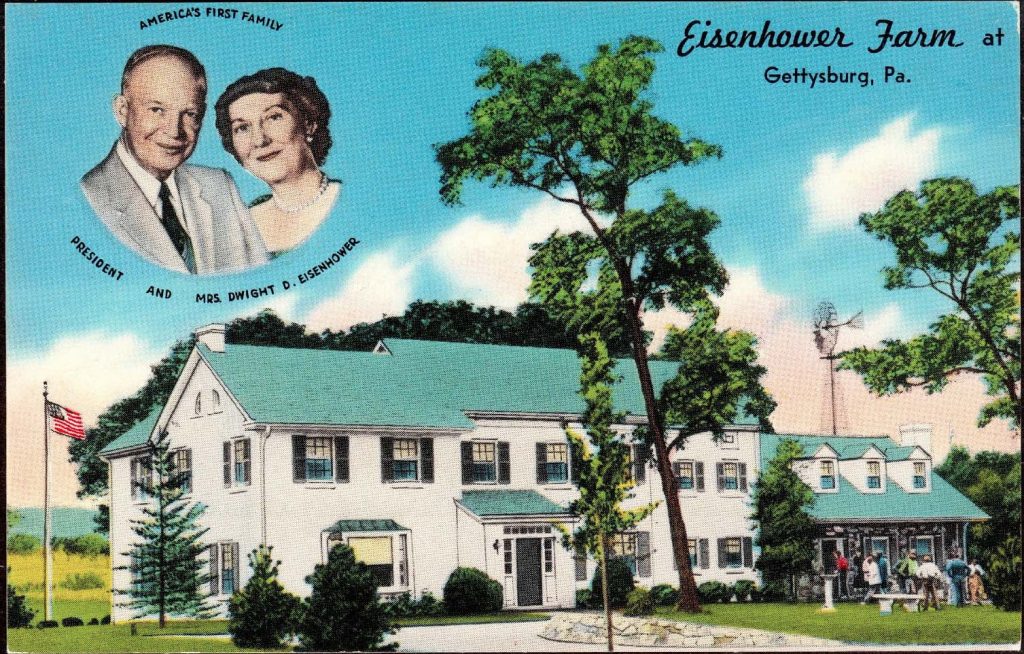 In his farewell address of January 1961, Eisenhower spoke ominously of the looming problem of the military-industrial complex.

In retirement, Eisenhower lived on his Gettysburg farm, wrote two memoirs and traveled extensively. He died on March 28, 1969.

Bill Burton began collecting Ossining, New York postcards when he lived in that Hudson Valley town. His collection expanded, of course, to include his college, the neighboring towns, and places where he and his wife traveled. In retirement, he's refocused on Delaware and the DelMarVa peninsula towns, but he’s just as likely to be found parked in front of the 25¢ boxes at shows.
PrevPreviousNobody Collects View Folders
NextA. Nielen’s Second CareerNext
2 Comments
Oldest
Newest Most Voted
Inline Feedbacks
View all comments
Mary Schaefer

I had no idea that Eisenhower was such an interesting character, nor that his accomplishments were so extensive. He was just the sleepy “adult” in charge of the country during my childhood. From the deal with his brother about paying their college tuition, to going to tuition-free West Point he was able to find pragmatic solutions to the problems facing him. Putting together the NATO organization must have been quite a bit of work given that today’s effort to keep it together has become so difficult.
After reading this article I have a sincere feeling of gratitude for President Eisenhower.

“Ike” (geez, that sounds so disrespectful) was president when my family moved to Vermont in 1957. For three subjects of the new queen to pull up roots and move to America, made us a posse in the Brave New World. I hope to return to Vermont after I retire. I’ve been planning that day for quite some time. I just emailed Mr. Burton, with a promise to submit another article, I hope he will publish it.