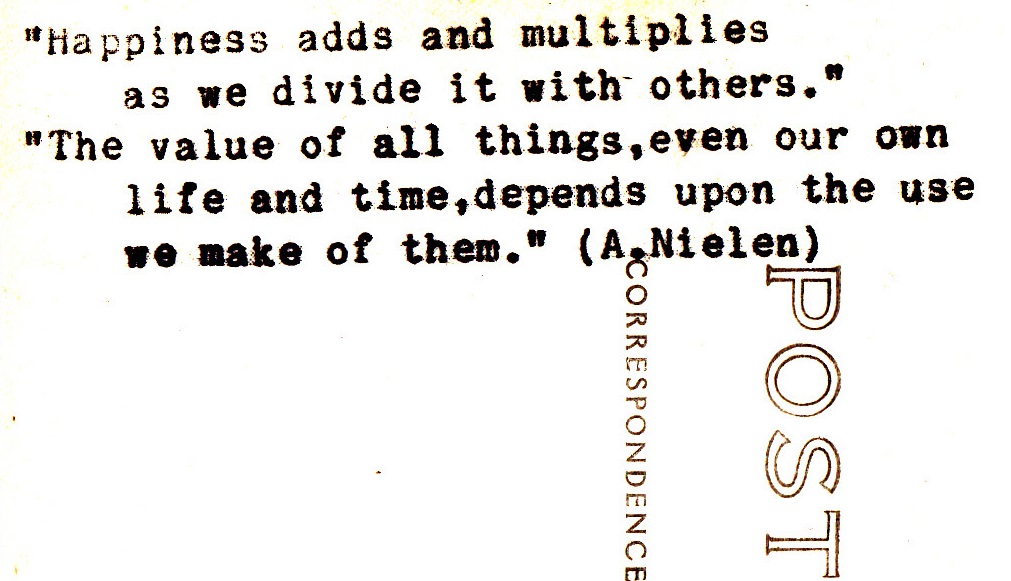 This is an example of one of the sayings Nielen typed on his cards.

I first discovered the intriguing images of A. Nielen, photographer, in my quest for Hawaiian postcards. They aren’t the usual tourist views; they show real people; even his scenic views are unusual.

Also, on the back of most of his cards is a typed message vertically on the left side; it is usually an uplifting quote from a famous person or Mr. Nielen himself.

Subsequently I found some of his views of the South Pacific, also a collecting interest of mine. Next came searches on ebay where I noticed his cards from Switzerland, China, Japan, Holland, and other countries around the world as well as many states in America, the Panama California Exposition in 1917, and the California Pacific International Exposition in 1935. Now my curiosity was aroused, so I began researching Nielen. Recorded below are the results of what I found, and I would love to receive any other information that our readers know about this fascinating man.

I first discovered the intriguing images of A. Nielen, photographer, in my quest for Hawaiian postcards. They aren’t the usual tourist views; they show real people; even his scenic views are unusual. Also, on the back of most of his cards is a typed message vertically on the left side; it is usually an uplifting quote from a famous person or Mr. Nielen himself. 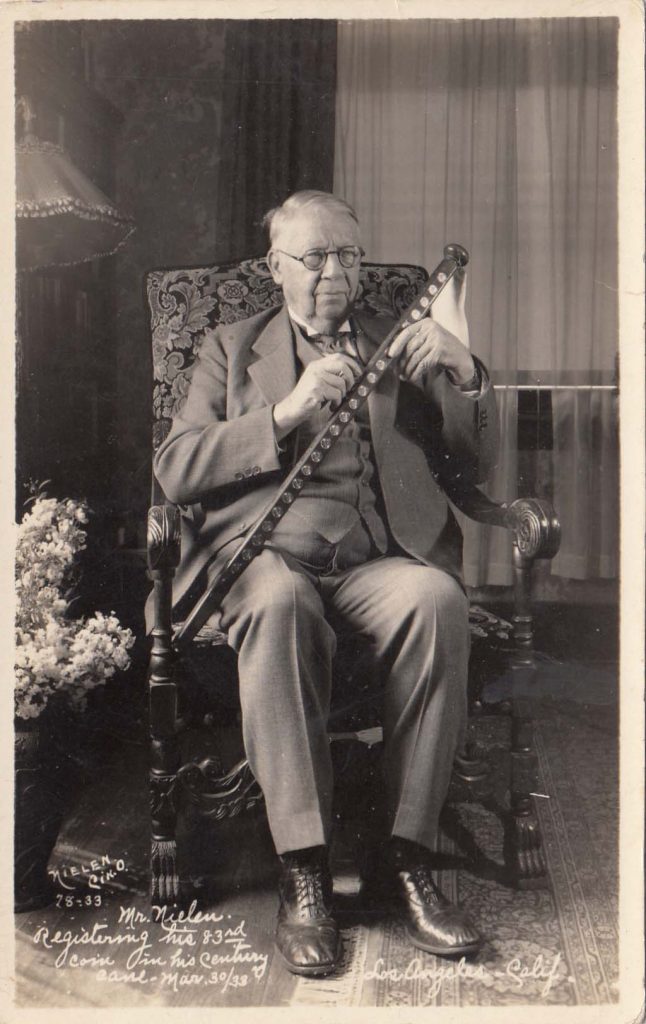 Andries Nielen (1850-1940) was born in Haps, Holland. After moving to the United States, he eventually became the head of a Cincinnati, Ohio, firm that distributed teas, spices, and various household products in the 1880s. Nielen retired in 1905 to travel around the world and thus began his second career as a photographer and postcard publisher. His publishing company, the A. Nielen Company, was at 221-223 West 4th Street in Cincinnati, Ohio. He marked all of his cards “Nielen, Cin. O” followed by two numbers; the first digit(s) is the negative number; the second is the year the photograph was taken.

Mr. Nielen’s company was known as a publisher and importer of cheap and fast selling 10¢ serial books. He still headed the original tea/spice company until his death. He was also a philosopher writing the publication Friendly Cheer with his views on life as well as quoting the wisdom of others.

When he quit traveling, Nielen moved to Los Angeles, California, and I have seen several postcards of him taken at his home. Upon his death, his huge collection of 100,000 worldwide images was donated to the Cincinnati Public Library. I have included a few of his real photo postcards as examples of his work. 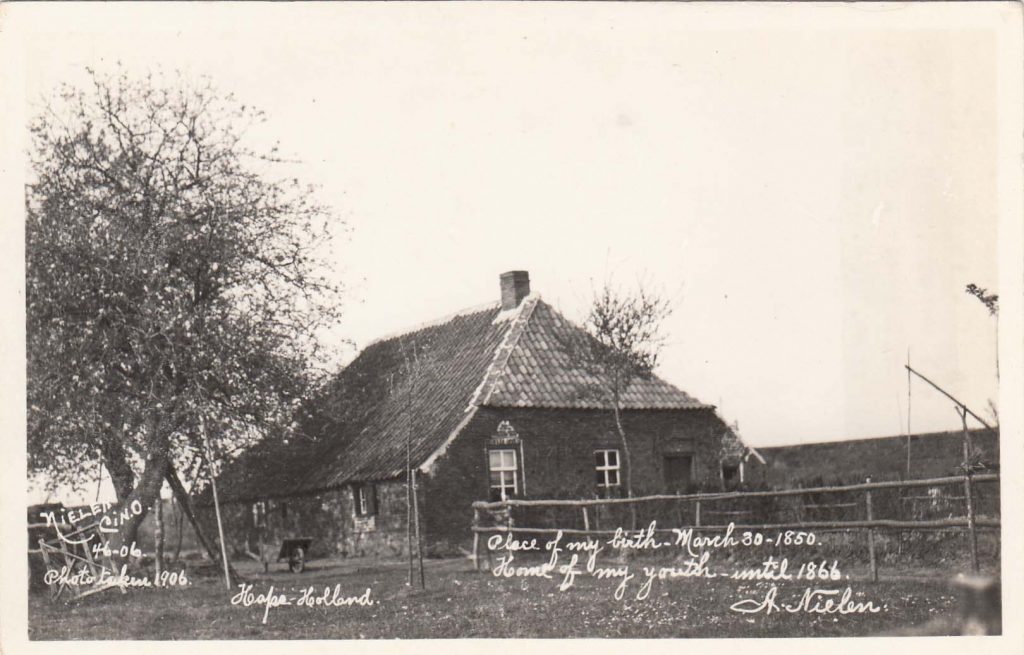 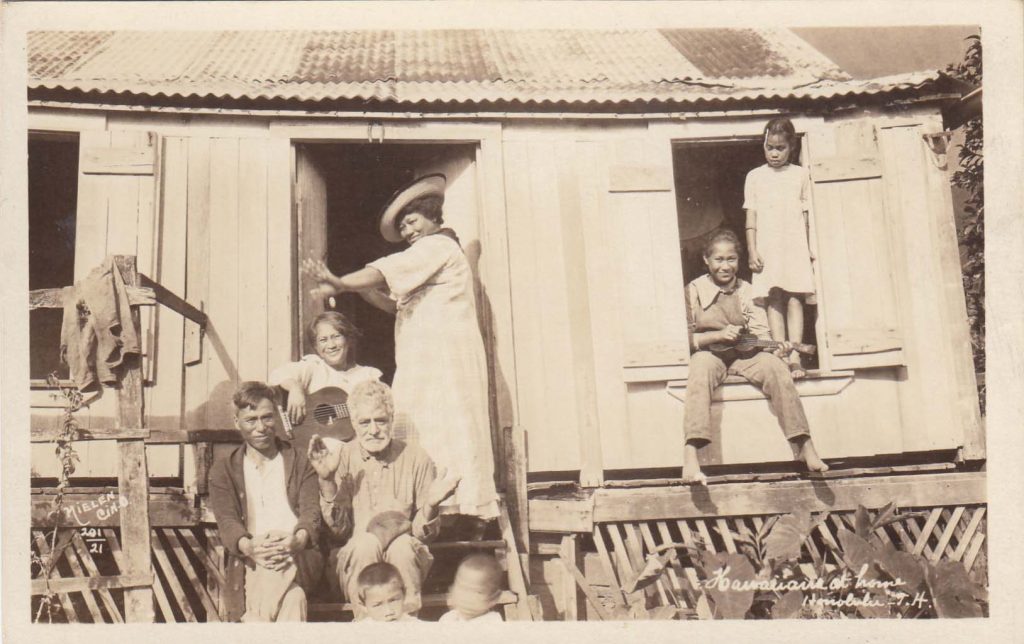 “Hawaiians at Home.”
You would never find an image of a multigenerational Hawaiian family living in a metal roofed shack in the tourist shops,
but this shows real life.
1921 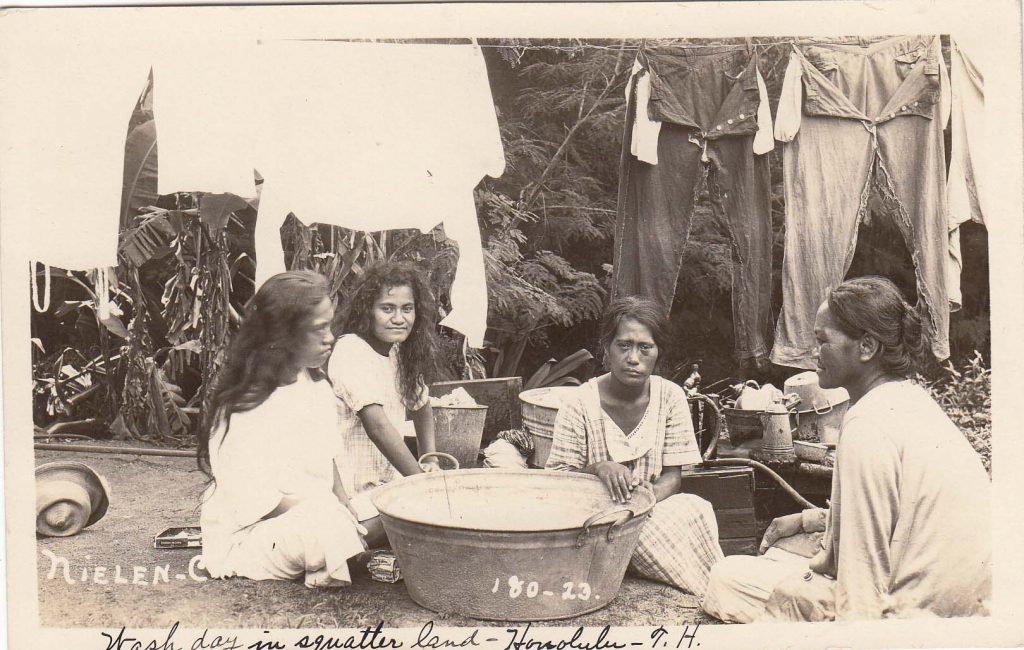 “Wash Day in Squatter Land.”
Here is another view that does not feature the
“romantic” image we associate with the islands.
It also uses what I consider the derogatory term “squatters.”
1923 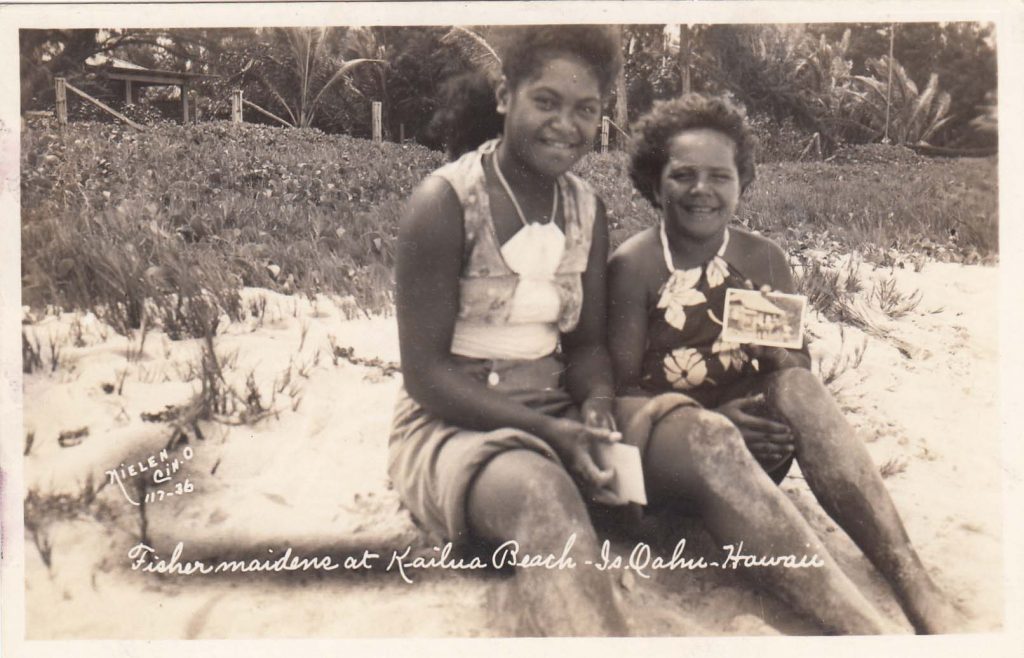 “Fisher Maidens at Kailua Beach.”
This was my first Nielen postcard and look at
the postcards the girls are holding!
1936 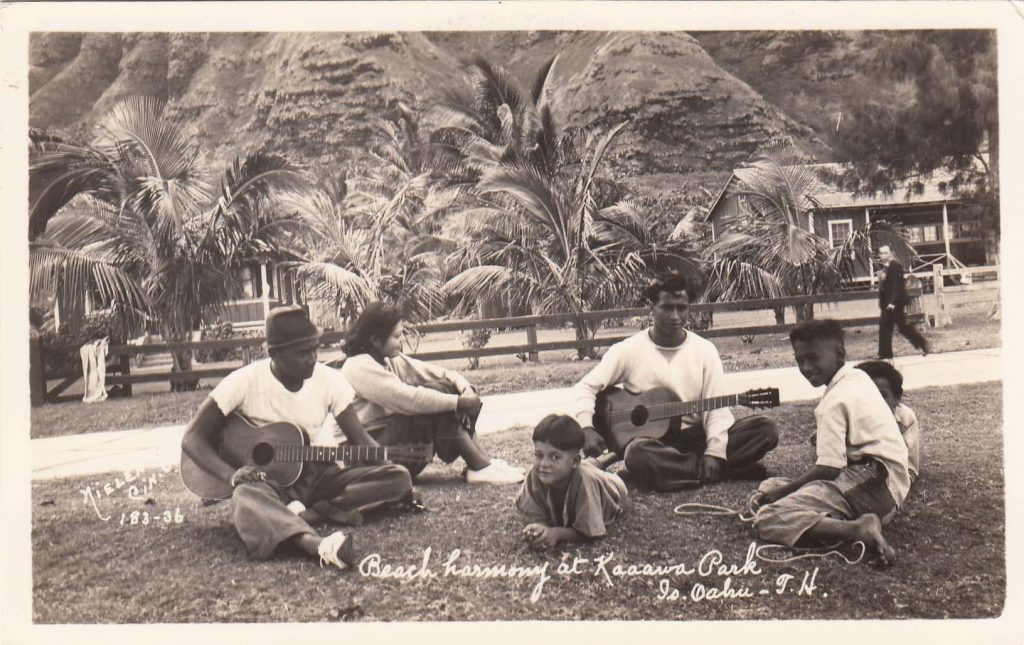 “Beach Harmony at Kaaawa Park, Is. Oahu, TH.”
These are not the typical beach boys
but a group of friends playing music.
1936 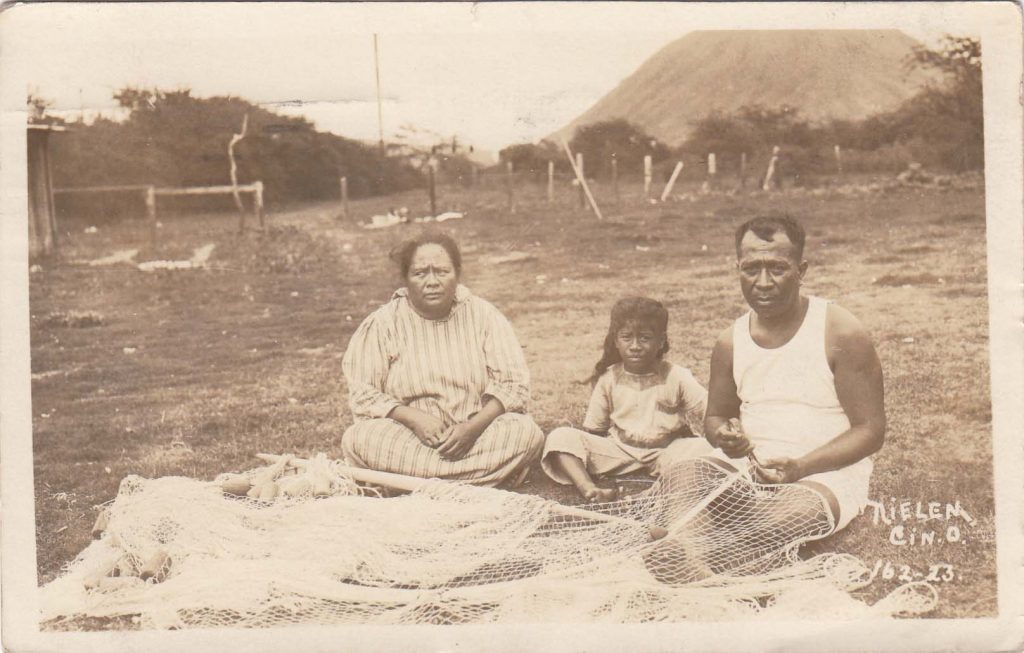 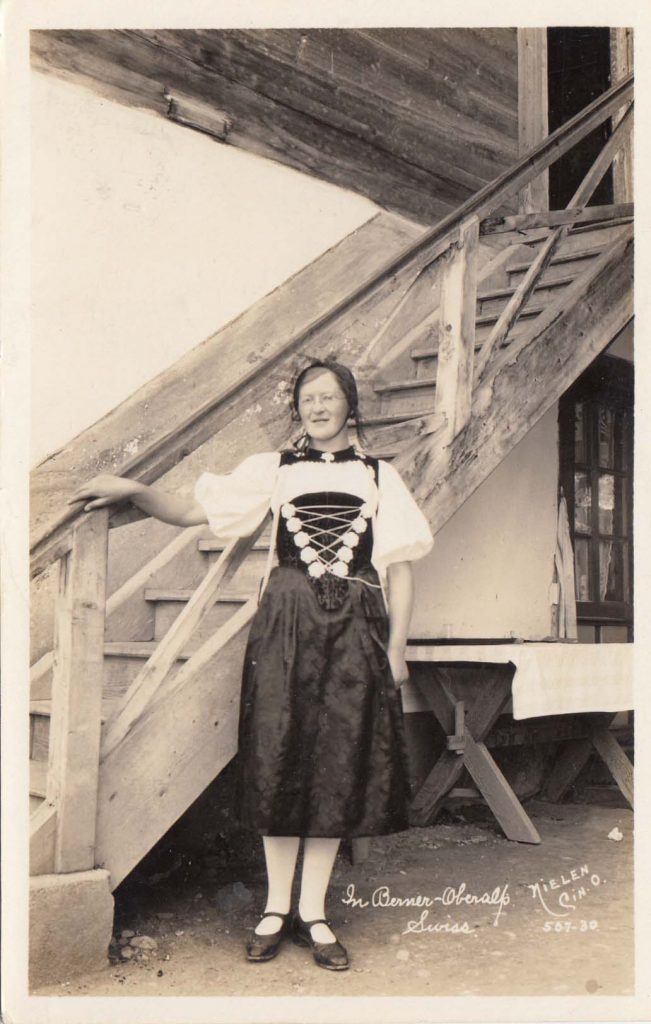 “In Bernu-Oberalp Swiss.”
This is more of a posed image, unlike his normal (casual) images.
1930 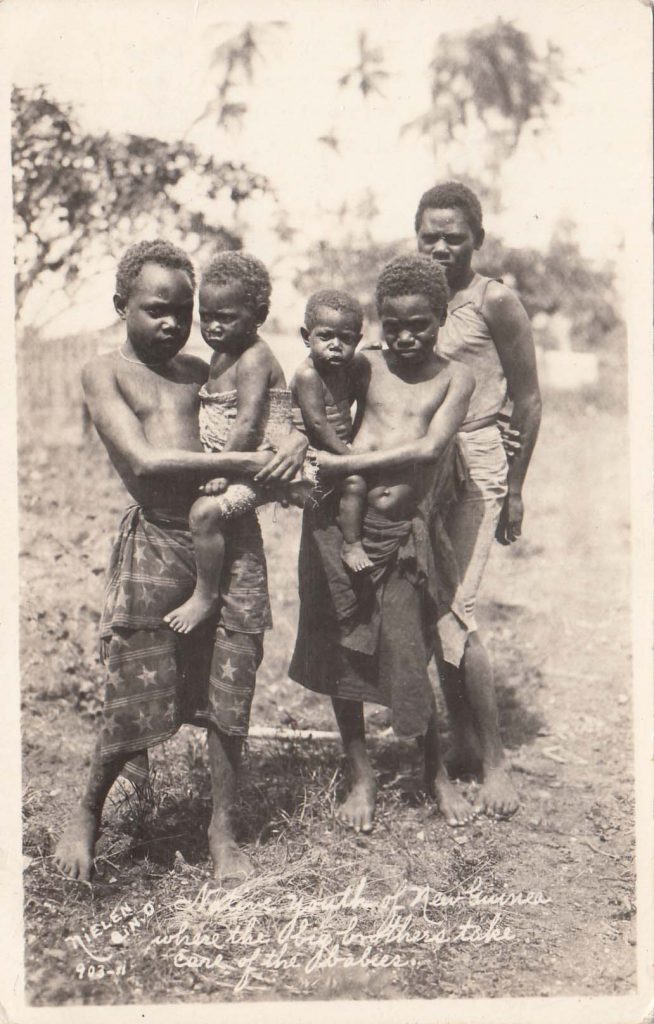 “Native youth in New Guinea where big brothers take care of the babies.”
1911 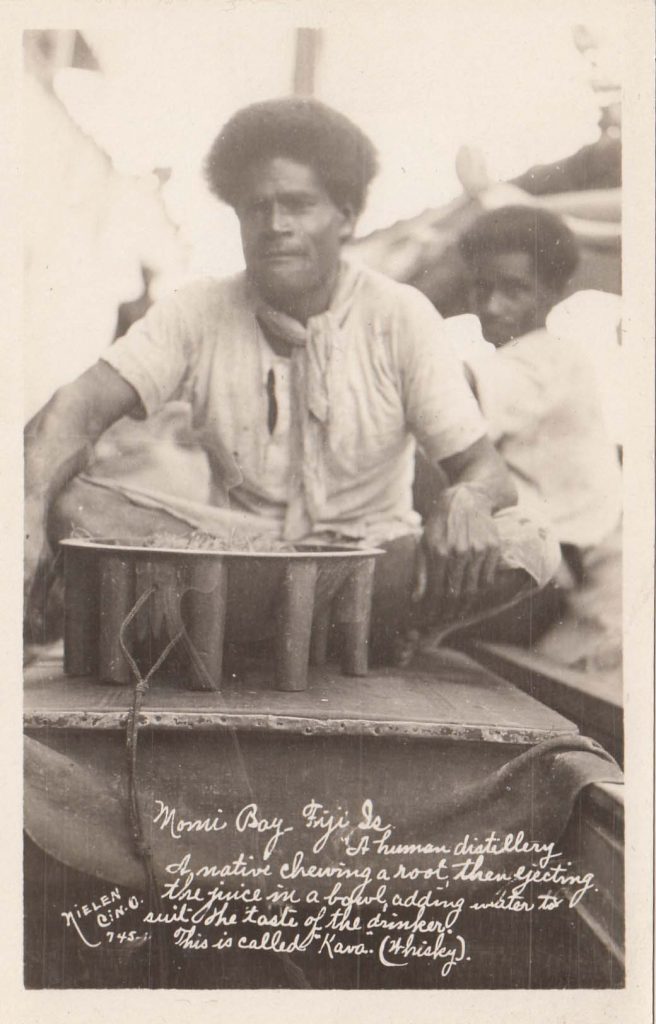 “Momi Bay, Fiji Island.  A human distillery – a native chewing a root, then ejecting the juice in a bowl, adding water to suit the taste of the drinker. This is called kava (whiskey).”
1911 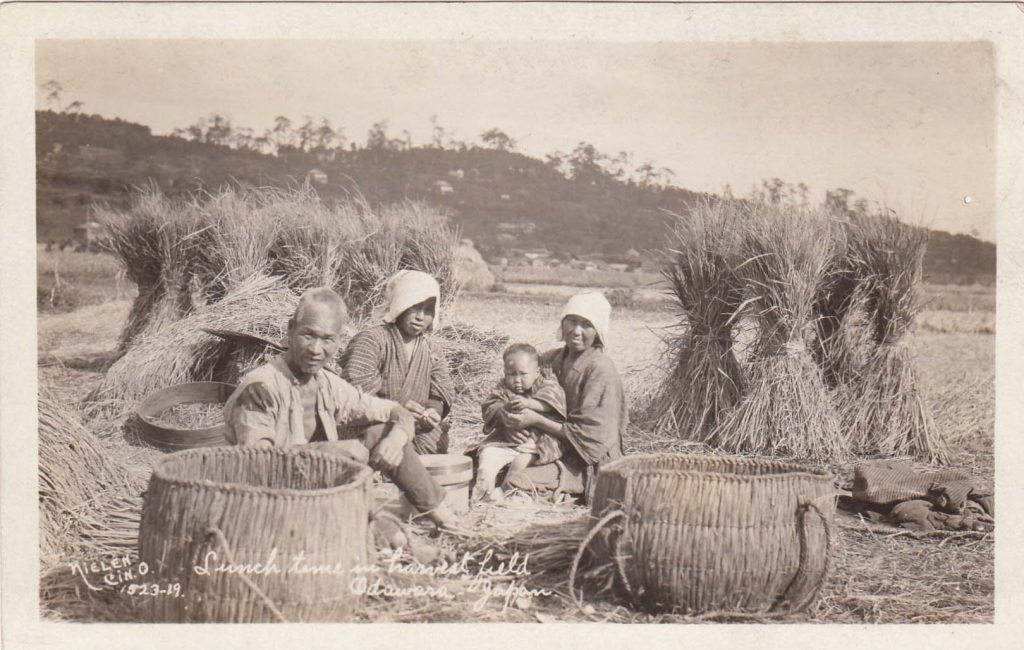 “Lunch Time in Harvest Field, Odawara, Japan.”
Obviously, his desire to capture the culture
of the people extended to
his travels to all parts of the world. 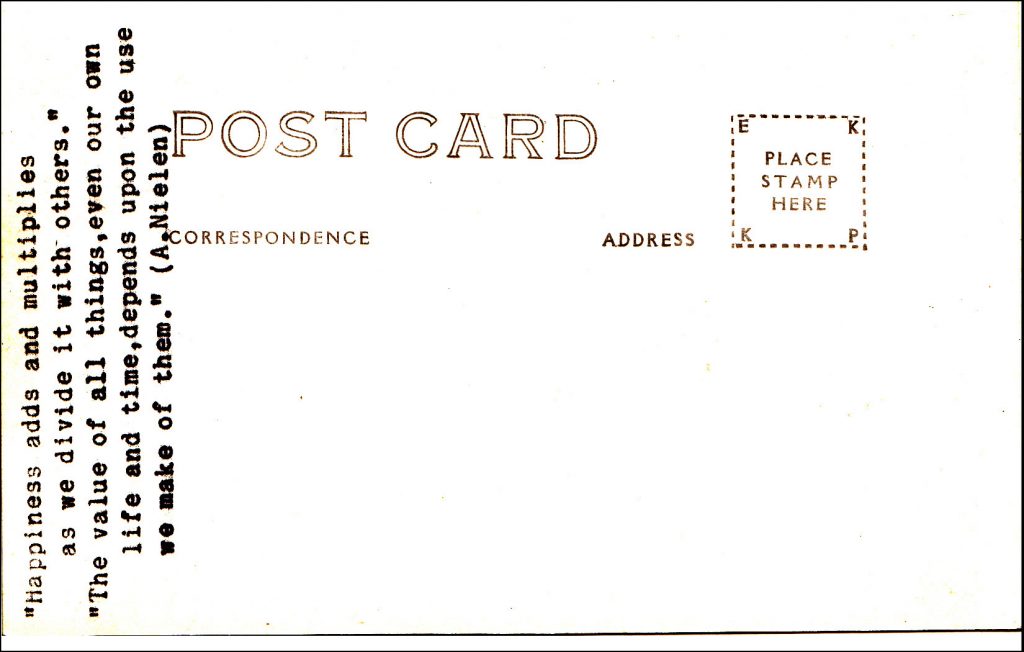 This is an example of one of the sayings that
Nielen typed on his cards.
“Happiness adds and multiplies
as we divide it with others”
“The value of all things, even our own
life and time, depends upon the use
we make of them.” (A. Nielsen)

[Editor’s Note: Additional research done for the presentation of this article suggests that the image entitled, “In Bernu-Oberalp Swiss” is a photograph of the photographer’s wife, Mrs. Dora H. Nielen.

PrevPrevious“I Like Ike!”
NextMeet Nipper, the RCA DogNext
Dolores Rowe has lived in Kennett Square, Pennsylvania since 1967.  She started collecting postcards in 1969 and within a few years she became a dealer as well.  She has authored or co-authored three books using postcards of her home area, Chester County, Pennsylvania.  Her collecting interests include state views, holidays, and topics including real photos of multiple births and real photos of American Christmas trees.  Dolores has presented programs on postcards, Santa Claus figurines, and tips on telling if an item is vintage and has put on displays of both Santa Claus figurines and postcards in the local library.  She has also worked as an estate appraiser for over 35 years for a local law firm.  Her original career was teaching which she retired from after 30 years.
11 Comments
Oldest
Newest Most Voted
Inline Feedbacks
View all comments
Ray
Editor

My adventure in the preparation of this article for postcard history was sheer delight. Thank you Dolores for introducing us to Mr. Nielen, a truly fascinating character.

I just found this magazine and was so surprised and excited to find this informative article about A. Nielen. I have a few Japanese postcards, and several years ago at a local antique shop, I bought one that just intrigued me, particularly because it was not a typical Geisha card, “Hotel maid / Shiraoi-Yezo Japan” and “Nielen / Cin O. 917/16.” It is a beautiful photograph of a young woman standing, holding a broom, and looking pensively into the distance to her right. Shiraoi is a town in Hokkaido, which I am guessing is the reference here. On the back… Read more »

I wonder if Mr. Nielsen paid his models. I suspect not.

Interesting views of a bygone era.

I really enjoyed this article on Mr. Nielen, and was just about to call Dolores Rowe on WhatsApp and tell her about this….and to my surprise, I see that Dolores authored this article!!! My goodness. So interesting to see these really unusual views of ordinary people, just like us…not models with a surf board or a grass skirt, but real folks. I like Mr. Nielen’s penmanship also, and what a treat to be able to read cursive writing. These postcards truly document his travels and show it like it was. Thanks Dolores for sharing all of this with us. And… Read more »

I recently retired and began sifting through a ton of old photos that I ended up with through the family. I’m originally from Cincinnati and the photos I have stretch from the 1880s and into the 1940s. I noticed the photographers’ impressions and companies imprinted on the covers and started to investigate them. One (or more – haven’t finished yet) is a beautiful portrait of a young girl and the photographer’s mark is “Nielen Studios, Cincinnati O”. Based on what I found on this site, the photo dates back to the 1905 timeframe, and it’s in perfect condition as is… Read more »

Aloha. Enjoyed your article and have recently come across a few Nielen Magic lantern Glass slides of Hawaiʻi and have found them to be just as the article describes, as unique subject and views of Hawaii. Presently working on a book on Magic Lantern Slides of Hawaiʻi and his work is an important contribution along with Ray Jerome Baker, two professional photographers that captured Hawaiʻi a century ago… Aloha ke Akua, Tim

I have a card taken in Beirut with the number 368-07… Do you have any information on his trip to Beirut. it should be in 1907 since his card is dated 07

I am Andrew Nielen’s great great great great niece and we have many many of his original post cards because he was my great grandpas God father. we also owned his cane for a for a long period of time but my dad decided to give it to his granddaughter who is a closer relative. Andrew is also the one who brought my whole dads dads side of the family over from holland to Cincinnati and Wisconsin

Also the name of his birth home town that you couldn’t decipher is the Haps, Holland