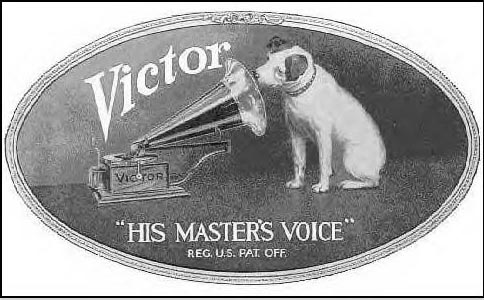 Nipper, was easily amused. Legend tells that Nipper would sit in front of an Edison phonograph and quizzically gaze into the horn from which came some of the first recorded sounds in history. “His master’s voice,” is very doubtful, but his owner, the English artist Francis Barraud, painted the dog and entitled the picture, His Masters Voice.

In 1901 Eldridge Johnson purchased the right to use the image as a corporate logo in the United States from the Gramophone Company of London, and thus the RCA Victor trademark was created. When Victor and RCA merged in 1929, the trademark was passed along and continued to be the company logo until 1969 when it was discontinued following the retirement of David Sarnoff from RCA.

Dear Readers,
Remember Nipper and be sure to return to IN A FEW WORDS next Sunday. I have a surprise for you.
Ray, editor
postcardhistory.net

that was a great logo. a shame they discontinued it. they could have instead modernized by making it more abstract.