the Father of Wartime Comics 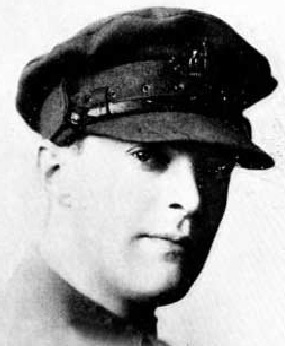 Long before Private Breger (drawn by Dave Breger) shared with us the humor in the often illogical routine of daily army life and Willie and Joe (drawn by Bill Mauldin) became the voice of truth about what it was like on the front lines of war, our British cousins had Old Bill, drawn by Captain Bruce Bairnsfather

Born in 1888 to a military family and educated in England, Bairnsfather initially intended to join the military but he failed entrance exams twice and was forced to join the Cheshire Regiment, an honorable infantry regiment of the British Army, part of the Prince of Wales’ Division, but one that had no customary recruiting practices.

Although well suited emotionally, but not physically, military life did not work for Bruce Bairnsfather; he resigned his commission in 1907 after making the decision to pursue a career as an artist.  Then and today, many artists need to fill their days with odd jobs that, as they say, “pay the bills” – such was the case for Bairnsfather.

Humor was not only a profession for Bruce Bairnsfather; it was a way of life, and many people recognized his talents.  One day in 1911 he made friends with a man forty years his senior – Thomas Lipton.  That friendship solidified Bairnsfather’s social and financial status for the rest of his life.  Bruce not only secured commissions to draw advertising sketches for Lipton Tea, but also Player’s Cigarettes, Keene’s Mustard and Beecham’s Pills.  Who knew tea, tobacco, mustard, and laxatives could engender an entire life’s fortune?

On the eve of World War I, Bairnsfather joined the Royal Warwickshire Regiment and served with a machine gun unit in France until 1915.  When he returned to England with hearing damage sustained during battle, he was posted to a unit on Salisbury Plain, the place he considered the birthplace of his best-known character, Old Bill.  Bill was a veteran infantrymen in the British Expeditionary Forces who spends his days mentoring his young troop-mate Alphie. 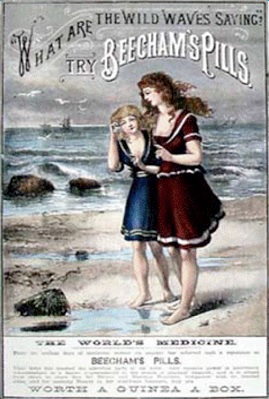 What are the wild waves saying?
Try Beecham’s Pills 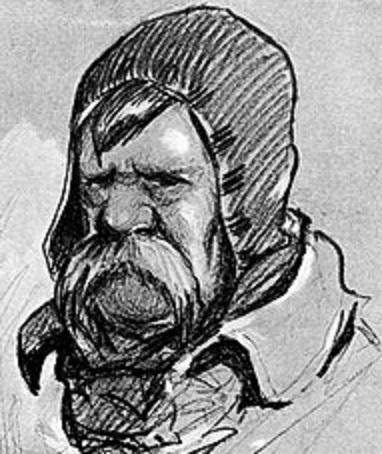 Old Bill was a grizzly character with a walrus mustache and despite his immense popularity with the troops and massive sales increases for the publisher (The Bystander), there were objections from many sectors of the newspaper’s audience, to the “vulgar caricature” of Old Bill.  Nevertheless, Old Bill’s and Alphie’s success in raising morale led to Bairnsfather’s promotion and the receipt of a War Office appointment to draw similar cartoons for other Allied forces.

After Bairnsfather married Cecilia Agnes Scott in 1921, he continued to draw Old Bill and the cartoon remained popular between the World Wars.  Many police officers of the time had similar facial hair, and that may have led to British police being referred to as “The Bill.” Bairnsfather work was the subject of one of the first British sound films (1927); he also wrote and directed the 1928 Canadian film Carry On, Sergeant.  Old Bill also appeared in books, plays (including Broadway), musicals, and films. 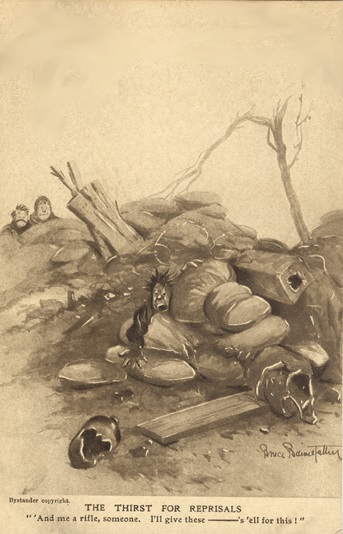 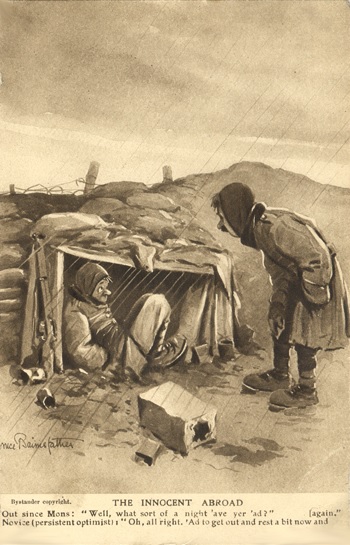 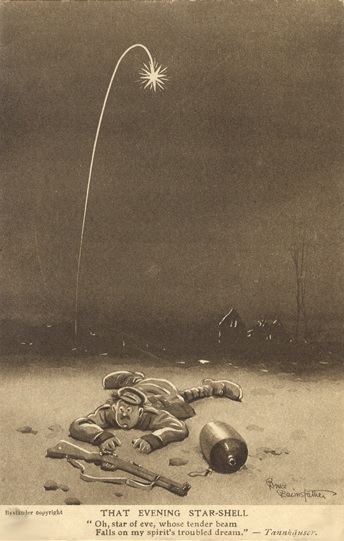 That Evening Star-Shell
“Oh, star of eve, whose tender beam, Falls on my dream.” 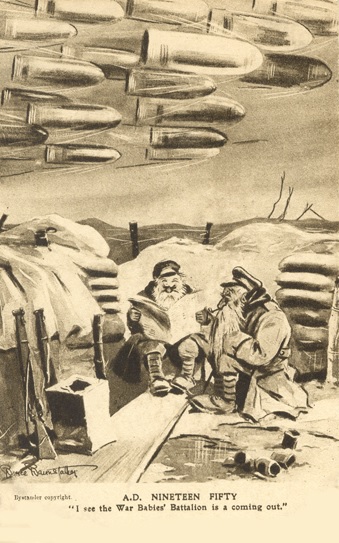 A.D. Nineteen Fifty
“I see the War Babies Battalion is a coming out.”

During World War II, Bairnsfather continued his Old Bill work, but he was never asked to help with the British war effort.  Instead, he became the official cartoonist for the American forces in Europe, contributing to Stars and Stripes and Yank.  He also drew or suggested hundreds of nose art pieces for American aircraft.

Mr. Bairnsfather died in 1959 of complications of bladder cancer.  In later life, he had found himself typecast as the creator of Old Bill, and his [London] Times obituary concluded of his career that he was “fortunate in possessing a talent … which suited almost to the point of genius one particular moment and one particular set of circumstances; and he was unfortunate in that he was never able to adapt, at least happily, his talent to new times and new circumstances”.

Ray Hahn is a retired educator, but he has never stopped teaching. His decades of researching, writing and editing a newsletter for the South Jersey Postcard Club has been a world-class education in trivia. In addition to postcard collecting, Ray’s other interests include history, genealogy, and touring the world with his wife Marie. Ray often advises his readers to "Join me as we explore the world one postcard at a time." Ray and Marie live in New Jersey.
PrevPreviousA Card Without a Caption
NextThe Crying Cayuse Twins PostcardsNext
0 Comments
Inline Feedbacks
View all comments
5 1 vote
Article Rating
Menu