A Card Without a Caption

A picture without a story? No Sir! 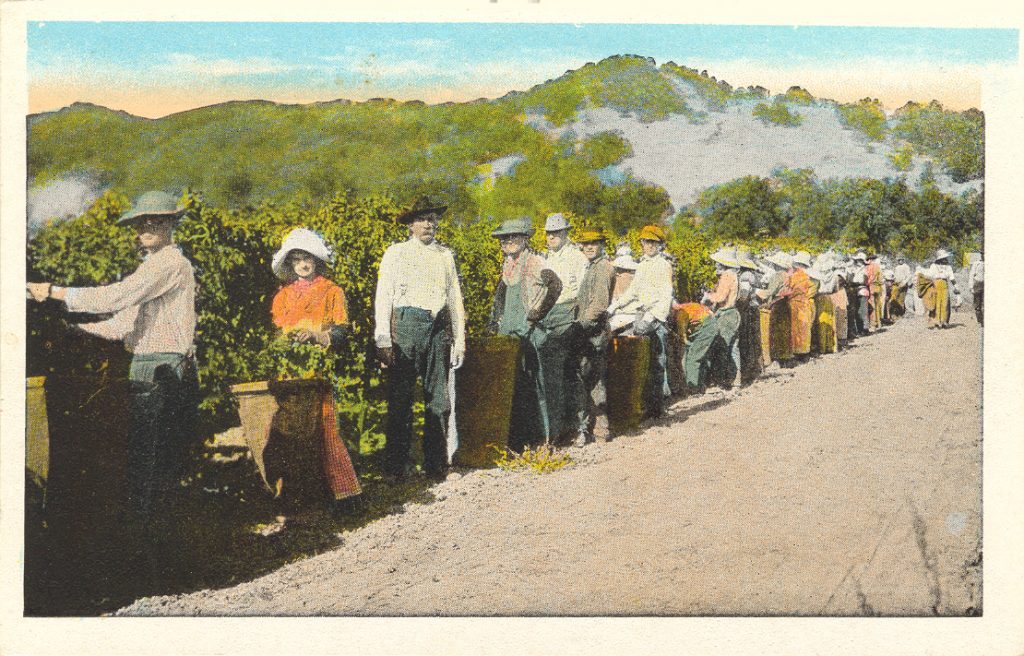 A Postcard Without a Caption

A friend who knows I collect postcards showing people at work gave me this card and asked, “What’s happening, here!”

I thanked my friend and sent out on a search to find what was happening in this picture.

The card is a white border, manufactured by the Pacific Novelty Co., San Francisco and Los Angeles.  It is unused and there is no caption, nor are there any other markings except for the words POST CARD on the address side.

The years 1915 through 1930 are considered the white border era in postcard manufacturing and early on there was considerable credit given to the idea that white borders saved ink.  Could be, but I rather fancy the idea that consumers bought white border cards because they closely resembled the photographs being taken by those new-fangled box cameras you could buy at the corner drug-store.

Close examination of the picture suggests it is grape harvest time in California – mid September to late October.  During the early years of the Great Depression was when many west coast vineyards started planting more varieties of grapes like Zinfandel, Pinot Noir and Cabernet Sauvignon.  Having such hardy benchmark grapes, Californians could make wines of such quality as to qualify in competitions worldwide. They most sought rivalries in France, but with European wines as well and did so within a dozen years.

Most California vintners grow their grapes in what is called canopy-style (eye-level to the average individual – about five to five and a half feet off the ground).  This makes it easy on the harvester by eliminating the need to reach over-head.  One could work one side of the vine while another harvester worked the other.  Some bending and stooping would be required but the harvest bags – about four feet tall and 36” in diameter – could be filled without difficulty.  Getting those bags to the receiving vats where the grapes were kept until crushing was quite a different story, when filled they could weigh from 120 to 160 pounds.

One question about this card was what the gray spots on the hill sides might be?  There is an easy explanation. The hot winds that bring high day-time temperatures to triple-digits in many parts of California, frequently contribute to forest and brush fires. The ones we hear about on the news.  Wind fanned fire burns incredibly hot and frequently destroys the vegetation that grows in the cracks of the rocky hills.  The fires leave the hills covered with ash, but the “blackened” areas are “washed” clean by the rains and the natural stone colors appear bright and vibrant in natural light.  Early in the mornings, when dew and moisture are on the ground and in the air, the rocky areas often give an illusion of “far away” clouds.

Migrant workers of the era are fairly well documented by photographic projects initiated by the Hoover and Roosevelt administrations.  The people on this postcard are typical late 1920s agro-employees.