Suffragists had long been divided over what was the best strategy to achieve “Votes for Women.” Some thought it best to campaign on a state-by-state basis, while others believed that the movement should focus instead on obtaining a national suffrage amendment to the U. S. Constitution, avoiding the pitfalls of state referenda.

But even those who favored the national approach saw the wisdom of winning over a few of the larger states to the cause to bolster their argument for a Constitutional amendment. Thus in 1915, four eastern states, Pennsylvania, New York, Massachusetts, and New Jersey all had suffrage measures on the ballot.

In Pennsylvania, the state association selected Charles T. Heaslip to manage the publicity for the campaign. Heaslip, a journalist, headed up the staff writers who deluged the local newspapers with articles about the suffrage movement. In terms of special features or visual demonstrations, however, Heaslip wanted to avoid sensationalism. 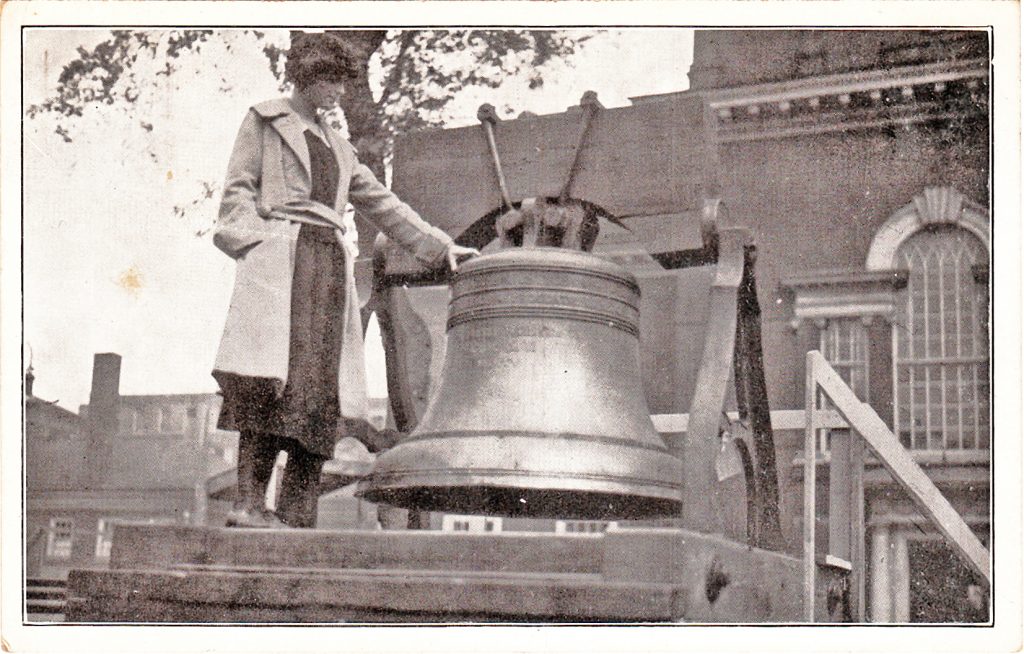 One of the demonstrations that the committee did endorse was that of Katharine Wentworth Rushenberger, who announced that she planned to have a replica cast of the Liberty Bell to be known as the “Women’s Liberty Bell” or “Justice Bell.” The only change in the replica from the original was to be an addition to the inscription to include the phrase “establish justice.” She also planned to bind the Bell’s bronze clapper and keep it silent until November 2, 1915 when she hoped that the proposed amendment to the [Pennsylvania] state constitution allowing women to vote would be passed.

The inscription on the Justice Bell reads:

ESTABLISH JUSTICE
PROCLAIM LIBERTY THROUGHOUT ALL THE LAND
UNTO ALL THE INHABITANTS THEREOF
MENEELEY BELL CO
TROY, NY
MCMXV 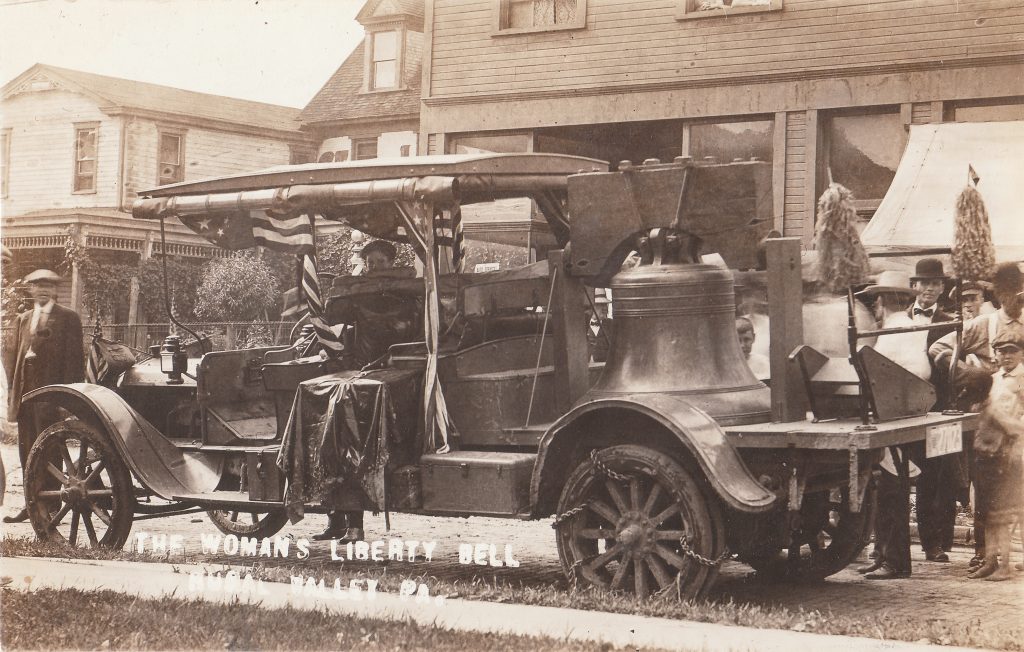 The actual casting of the Bell took place at the Meneely Bell Works in Troy New York on March 31, 1915. It was preceded by an elaborate ceremony involving a delegation of Pennsylvania suffragists led by Ruschenberger and Jennie Bradley Roessing, President of the Pennsylvania Woman Suffrage Association, along with Carrie Chapman Catt, President of the Empire State Campaign Committee. Tickets to the ceremony were printed and distributed for those wishing to attend. 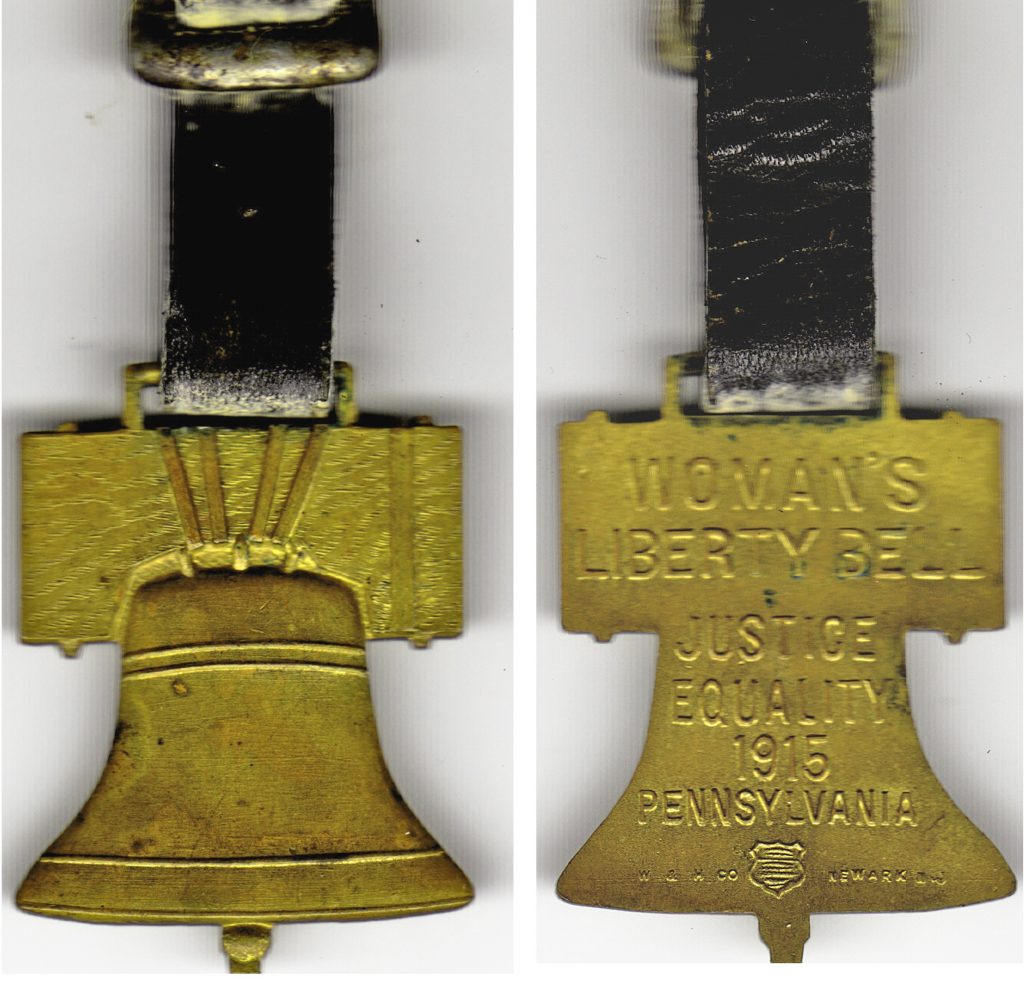 Once cast, the Bell was moved to Pennsylvania and placed on a specially reinforced truck that was to crisscross all 67 counties of the state. Before the campaign was over, the truck had traveled 3,935 miles, serving as a platform where hundreds of suffragists spoke to largely rural audiences, who otherwise would have known little of the upcoming referendum.

According to reports, those audiences received the Bell with almost as much reverence and ceremony as would have been accorded the original. Suffragists on the journey sold tiny watch fob replicas of the new bell to help defray expenses.

Despite the best efforts of the suffragists, however, the 1915 Pennsylvania referendum went down to defeat, and the bell’s clapper remained bound until a special ceremony took place in September 1920 in Philadelphia, after the National Suffrage Amendment had been ratified, giving women throughout the country the right to vote.

The Justice Bell is now housed at the Washington Memorial Chapel in Valley Forge, Pennsylvania.

For postcard collectors, one of the challenges is to find real photo cards of some of the various stops that the Suffrage Bell made throughout the state. Because most of these events occurred in small towns, we are dependent on local or itinerant photographers to have recorded them, and each extant variety is necessarily limited in terms of production. The only commercial recording of any of the ceremonies is a two-card set published by the Ernest Orr Company to commemorate the celebratory ringing of the Bell in Philadelphia in 1920. Because many of these real photo cards are not specifically identified as suffrage, they may be scattered in various categories of a dealer’s inventory.

To further appreciate the Suffrage movement in America, find either of Ken Florey’s books: Women’s Suffrage Memorabilia: An Illustrated Historical Study and American Woman Suffrage Postcards: A Study and Catalog. Both are available at Amazon.com. 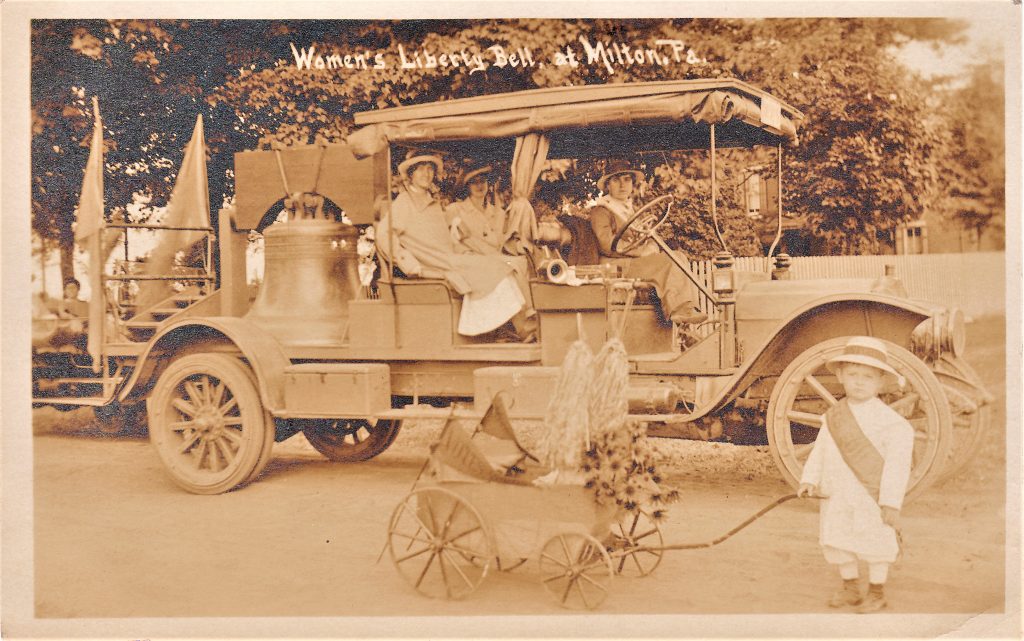 The Women’s Liberty Bell on Tour 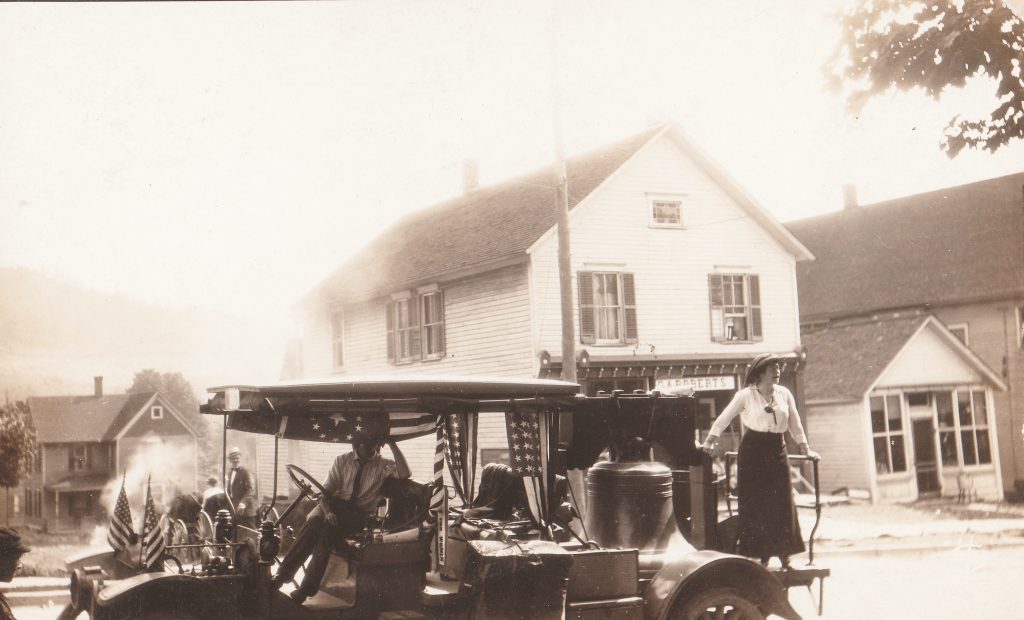 Kenneth Florey is a long-time collector of Woman Suffrage postcards and other memorabilia. His knowledge of the era is legendary and demonstrated in both books he has written on the topic.
PrevPreviousStone and Chisels
NextIdentifying Real Photo Postcards Using CrowdsourcingNext
1 Comment
Oldest
Newest Most Voted
Inline Feedbacks
View all comments
Robert Toal

Great article. It is interesting to note the Western states gave women’s suffrage before the others. Printed cards of these states – separate and as one exist. bt