How About Those Quiz Kids 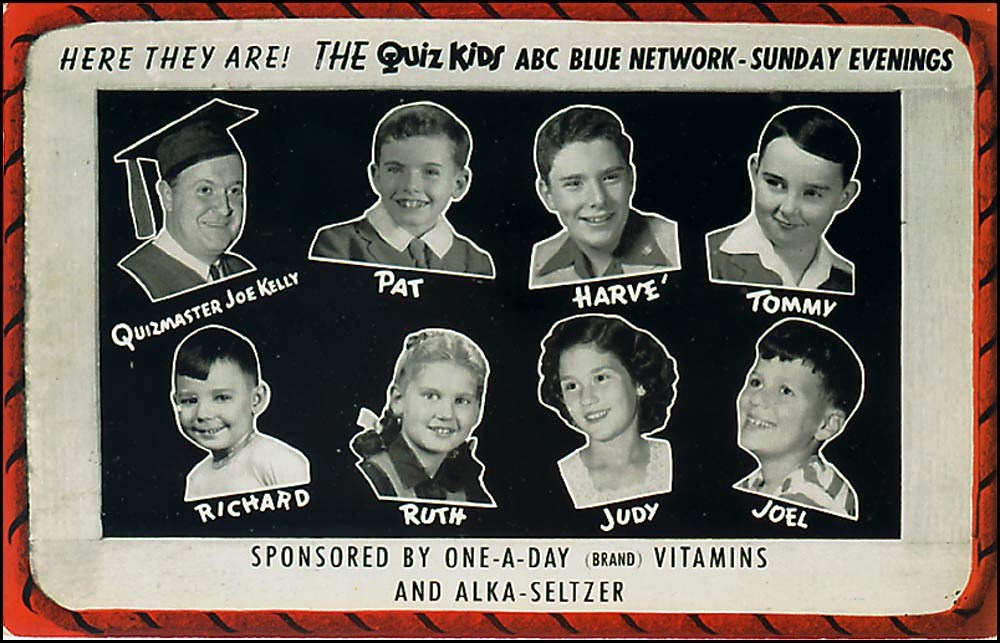 Between 1940 and 1956, there were about 600 different Quiz Kids; a few dozen were regulars from the ages of 7 to 16. Millions of people tuned in on their radios on Sundays to listen to five young contestants, recording live. Red-bordered postcards like this are rarer than the black-and-whites

The Quiz Kids were part of American culture for many years. In a time when children were to be seen and not heard, the entire country listened to them, secretly proud to now and then know a quiz answer themselves. Today’s gifted children owe their acceptance to these Kids, who changed public sentiment from seeing them as freaks, brats and “early to ripen, early to rot” to seeing them as just regular children who are smart. They popularized the idea that it wasn’t “sissy” to get good grades and that girls could reveal their smarts, too.

Quizmaster Joe Kelly asked the Quiz Kids questions that were sent in by listeners. If you sent in a question that was used on the program and the Kids got it right, you’d receive a Zenith radio. If the Kids missed the question you’d get a radio-phonograph. Each of the Kids was awarded a $100 savings bond for each appearance. 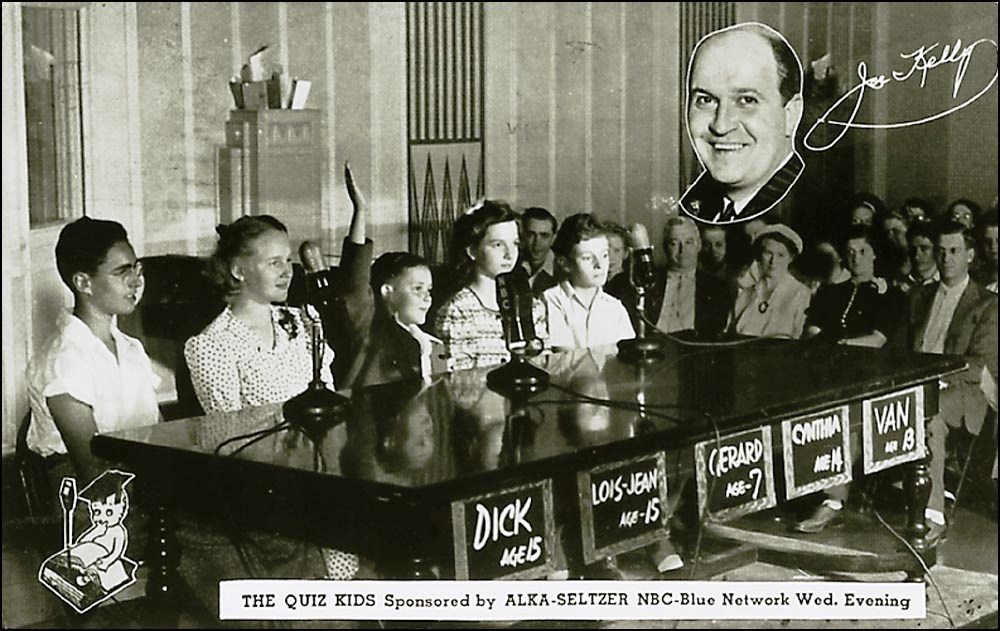 Sponsored by Miles Laboratories’ One-A-Day Vitamins and Alka-Seltzer, the original radio show was broadcast from Studio E at NBC’s Merchandise Mart in Chicago and was carried on Blue Network stations. This is one of the earliest radio-casts, with original Quiz Kids Gerard Darrow, 7, and Van Dyke Tiers, 13.

Kelly seemed, at first, to be an odd choice for his Quizmaster role. Far from being an intellectual (he dropped out of school in third grade to join a minstrel show), Joe’s claim to fame had been as the emcee of NBC’s “National Barn Dance,” a hillbilly radio show. But his kindness and affable manner put the young performers at ease, and he was truly amazed at—as well as appreciative of—the obscure things they knew.

He humanized the Kids by using down-home expressions such as, “Now put on your thinking caps” and was excellent at bringing out a shy child or toning down one who was hogging the microphone. The chemistry worked.

The Kids were chosen for their high IQs, special areas of interest, appealing personalities, sense of humor, stage presence and quickness. Though girls often did better in school, most of the Quiz Kids were boys. This was said to be because boys tended to have concentrated knowledge in specific areas, while girls knew more generalized information, which was less showy. It could also be that parents pushed their boys forward to try out for Quiz Kid fame more often than girls’ parents did.

Who were the adults behind the scenes? Creator Louis Cowan wanted a place for smart children to shine, as well as a show that would be entertaining and popular. He made sure the show awarded scholarships, sponsored high-school essay contests and Best Teacher competitions. Executive Producer John Lewellen, himself a science and math whiz, was the “power behind Joe Kelly’s throne.” A staff of 18 question editors combed the mailbags and re-wrote the entries with clever hooks. For example, a question might be, “What three explorers’ last names begin with “La, De and Da?” (Answer: LaSalle, DeSoto and DaGama).

At the height of their fame, the Quiz Kids went on the road for weeks at a time, raising $118 million for the Second World War bonds effort—and more for charity drives—visiting celebrities, competing with university professors around the country and getting the red-carpet treatment everywhere they went. They made movies and records and became the subject of cartoons, paper dolls and follow-the-dot book characters. Children read Quiz Kids Magazine, played with Quiz Kids games and toys and wore Quiz Kids badges on their Quiz Kids sweatshirts. 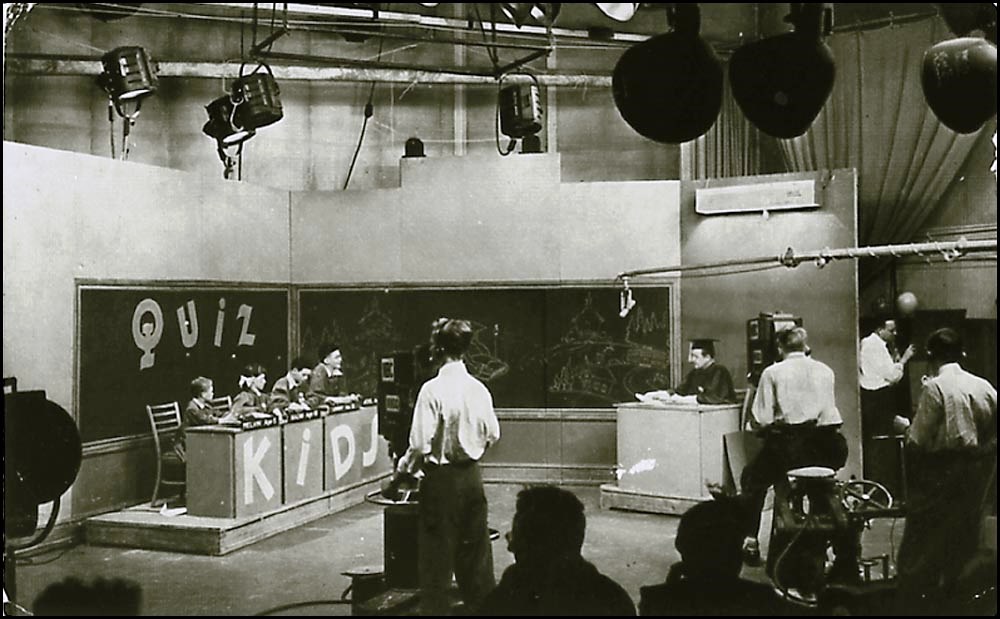 In 1949, the Quiz Kids debuted on TV, sometimes filmed on the Paramount movie set in New York. Students, selected from questionnaires sent to elementary schools, were auditioned for the show. This very unusual postcard shows the actual filming and a bit of the backstage area.

Beginning collectors of Quiz Kids postcards often think they have duplicate cards when they don’t. The design of the next two cards shown was often repeated, but just a couple of the children were different from card to card. There’s also a common layout showing the Kids’ faces in a circle. These three designs make up the most common postcards.

The Kids were child stars, and though the occasional Kid suffered the same sad fate as so many others who grew up in show business, on the whole they seem to have had better adult lives. James Watson, who only appeared a few times, went on to be a co-winner of the Nobel Peace Prize for Medicine in 1962 for discovering the structure of DNA. 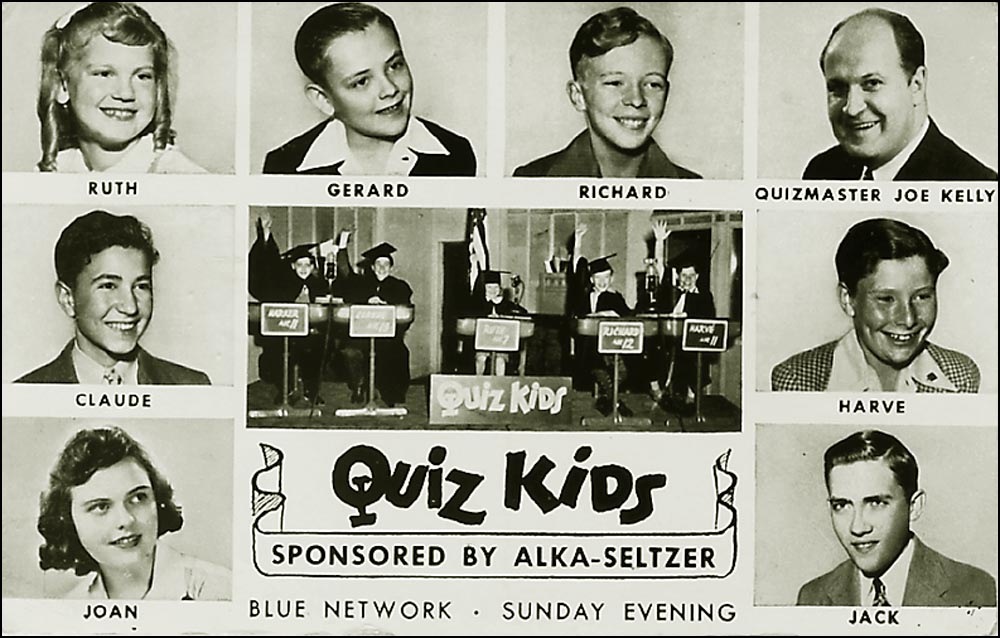 Match the stories to the names and faces as we peek into the lives of some of the individual Quiz Kids.

• Ruthie Duskin became a Quiz Kid at age 7 when her mother wrote to the show asking for an audition. Her specialties were literature and chemistry, though it didn’t hurt that she resembled Shirley Temple. The first female contestant, usually finishing third, she was part of the core group for nine years until she aged-out at 16. Ruth later became Ruth Feldman, teacher, photographer and author of Whatever Happened to the Quiz Kids?

• Gerard Darrow was a prodigy and an expert on nature, identifying more than 300 bird species by the age of 3. Recruited through a lecture he gave on birds at a Chicago school, he became a Quiz Kid at age 7. Largely responsible for the show’s initial success, he was the smallest Kid with a high-pitched voice and a deliberate way of speaking. He also had a reputation of being annoying and obnoxious. Gerard was on the show 90 times and appeared on the cover of Life magazine at age 9. But by age 47, short, stout, reclusive, troubled by prescription drugs and alcohol, and living on welfare with his 91-year old aunt, he died of kidney failure.

• Richard Williams was the “super Quiz Kid” who almost always finished first. Appearing 212 times in five years, Richard was so shy during his first show at age 10 that he didn’t answer any questions at all. A math wizard, he could do complex calculations in his head. He was also a music prodigy with perfect pitch. An achievement-oriented all-American boy, he later became the State Department’s deputy consul-general in Hong Kong.

• Claude Brenner was born in South Africa to Jewish parents whose families had fled the pogroms of Eastern Europe. His family arrived in the U.S. when he was 11 and he became a Quiz Kid at 12, with particular knowledge about airplanes. His accent, broad knowledge and polished manner made him one of only two Kids (along with Gerard) to get a standing ovation when he was recalled by popular demand. Claude later headed a task force that set up the instruments for the Navy’s first live test of nuclear anti-submarine rockets, then became an executive in an aeronautics firm. 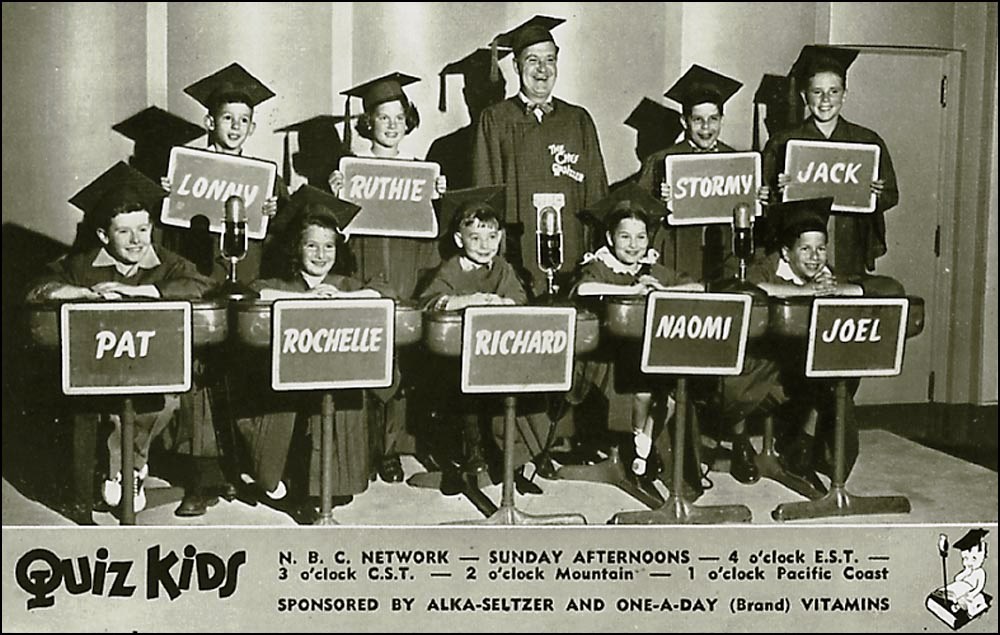 The Quiz Kids, along with Joe Kelly, behind desks in a publicity postcard.

• Harve Bennett (Fischman) was a charming and mischievous red-head with a big grin and a headful of presidential trivia. Becoming a Quiz Kid at 10, he almost always finished second—behind his buddy and chess opponent Richard—and was seen as intelligent but not the intellectual type. He became the wealthiest and most powerful Quiz Kid as an executive TV producer with hit shows such as The Six Million Dollar Man, The Bionic Woman, and the 1976 miniseries Rich Man, Poor Man.

• Joan Bishop, at 13, was one of the original Quiz Kids. She had perfect pitch, a passion for music (she sang at Carnegie Hall at age 20) and a love of poetry and literature. She never went to school (she was allowed by her parents to teach herself at home). Known as the Prettiest Quiz Kid, she was the top female contestant in 1941. Joan adored her Quiz Kid life, the companionship of the other Kids and meeting Hollywood stars. Without mentor or manager, she built a career in music and became a member of the New York City Opera.

• Jack Lucal had Quiz Kid strengths in history, geography, politics and the Bible. Within four months, he held the record for consecutive wins—15, with eight first-places. He didn’t like the “ballyhoo and notoriety” of being a child celebrity, and developed a strong sense of patriotism, public service and foreign policy. Jack became Father John Lucal, a Jesuit priest specializing in international service.

• Lonny (Lawson) Lunde, a piano prodigy and avid sports enthusiast, was discovered by a neighbor of another Quiz Kid at the age of 8, and appeared 235 times in seven years. His parents had him learn lists, such as Shakespeare’s plays, vice presidents and world capitals, and he became one of the top Quiz Kids. A professional popular local piano player/singer in Maine, his main interests were composing and being a stay-at-home dad. 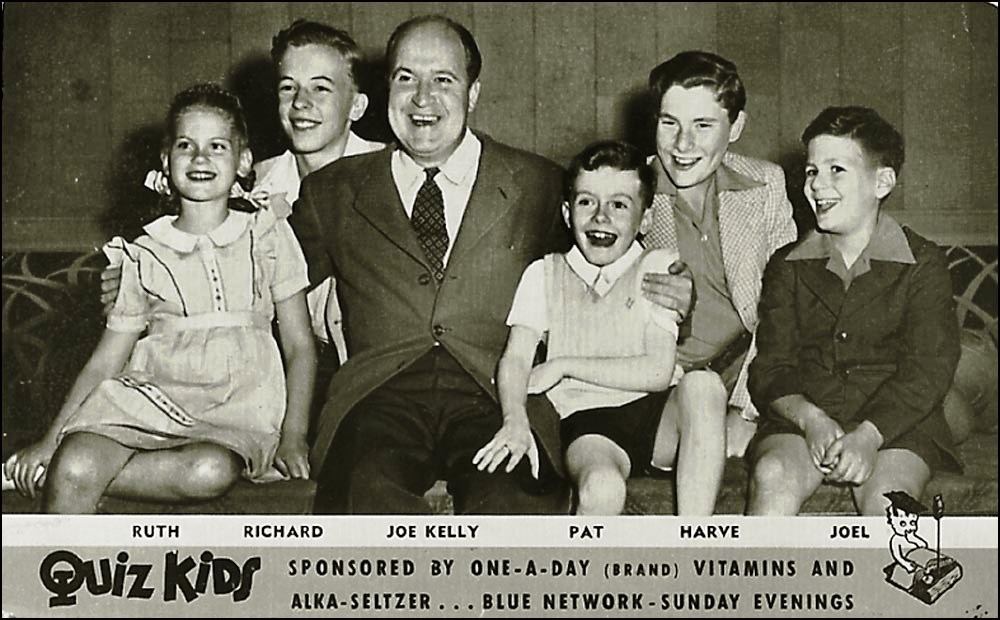 An early card showing the “family of regulars” depicts a more candid view of Joe and his Quiz Kids. This less common postcard retails in the $15-$20 range.

• Pat (Patrick) Conlon, along with Joel Kupperman, holds the record for the most appearances on the show: 385, from the age of 7 to 16. He was a genius at spelling and reciting dramatic monologues, and was an expert at Shakespeare and biblical genealogy by the age of 6. Pat became an actor and director in dinner theater and off-Broadway, settling in New York.

• Naomi Cooks became a Quiz Kid at 8, filling the “cute little girl” role, with her dimples and braids. A bundle of energy, she was a tomboy full of mischief with a flair for words. She loved the library and soaked up classical literature and mythology like a sponge. In later life, she wrote a college text, taught literature at the college level and founded “Think Big!”, a company that remodeled homes.

• Joel Kupperman was the youngest and perhaps most-beloved of the Quiz Kids. When he was 5, the fidgety math whiz wrote a letter to the show’s producers touting his abilities and asking to be on the program. The “toothless dynamo” at age 6, he lisped out logarithms in his tiny voice and could mentally calculate cube roots of 6-digit numbers with ease. He did math problems while playing the piano and at the wheel of an automobile simulator, and held his own against an electric calculator. With a Ph.D. at 27, Joel became a philosophy professor at the University of Connecticut and has written scholarly articles and course guides. 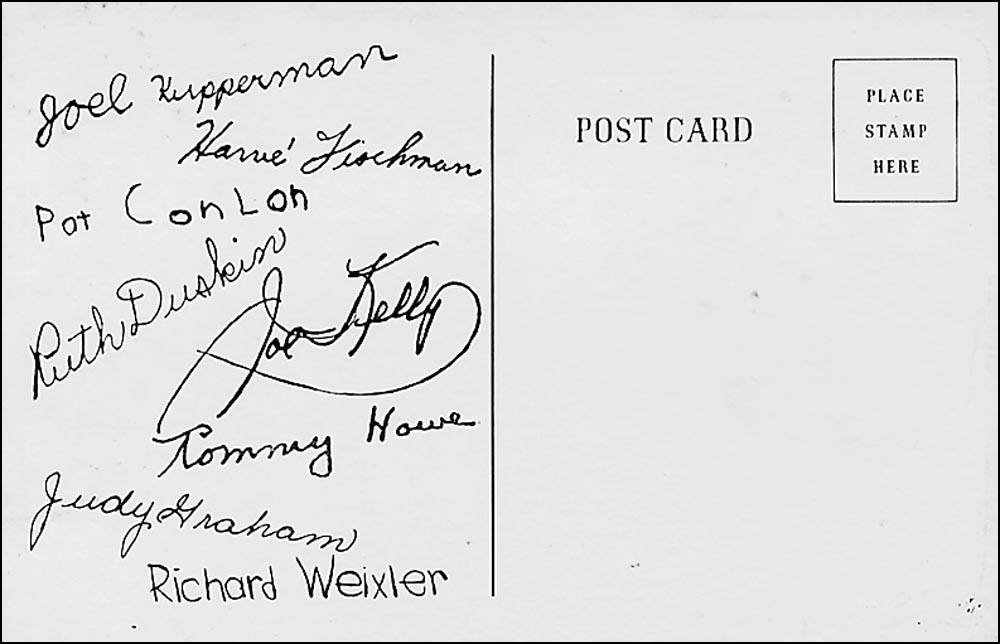 Most postcards backs show printed thank-yous to those who contributed questions, reviewing the rules and prizes. On this unusual back, though, Joe and the Quiz Kids are signing off.

You can listen to recordings of many of the actual Quiz Kids radio shows on the Internet Archives.

Thanks for tuning in!

Bonnie Wilpon is the author of Postcard History of Sarasota and Bradenton, Florida and Postcard History of Hollywood, Florida (published by Arcadia Books) and is a postcard dealer and collector in Tampa, Florida. She is Membership Chair of the Sunshine Post Card Club and a Contributing Editor for Postcard History. Bonnie can be contacted at: bonnpon@att.net.
PrevPreviousThe Worst Hurricane You Never Heard Of
NextThe Whole Story of the Needle’s HoleNext
3 Comments
Oldest
Newest Most Voted
Inline Feedbacks
View all comments
Will

Really fascinating biographies. I had heard the description “Quiz Kid” but never knew what it had referenced.

Love this article. I have never heard of this show… Very interesting…

I actually have an authentic post card with the Quiz Kids on it! The same one that’s first listed! How neat!