The Worst Hurricane
You Never Heard Of

The hurricane that devastated Florida September 16-17, 1928 (and Puerto Rico three days earlier) is the least known disaster in US history. It is also the deadliest weather event that has ever hit Florida.  In Puerto Rico it was called the San Felipe Secundo hurricane, according to the local custom of using saint’s name days to identify hurricanes.  It landed in Puerto Rico as a Category 5 and caused at least 300 deaths (possibly as high as 1,600), destroying nearly 75% of the island’s homes and leaving more than 500,000 homeless.  To his credit, President Coolidge immediately sent aid to Puerto Rico. 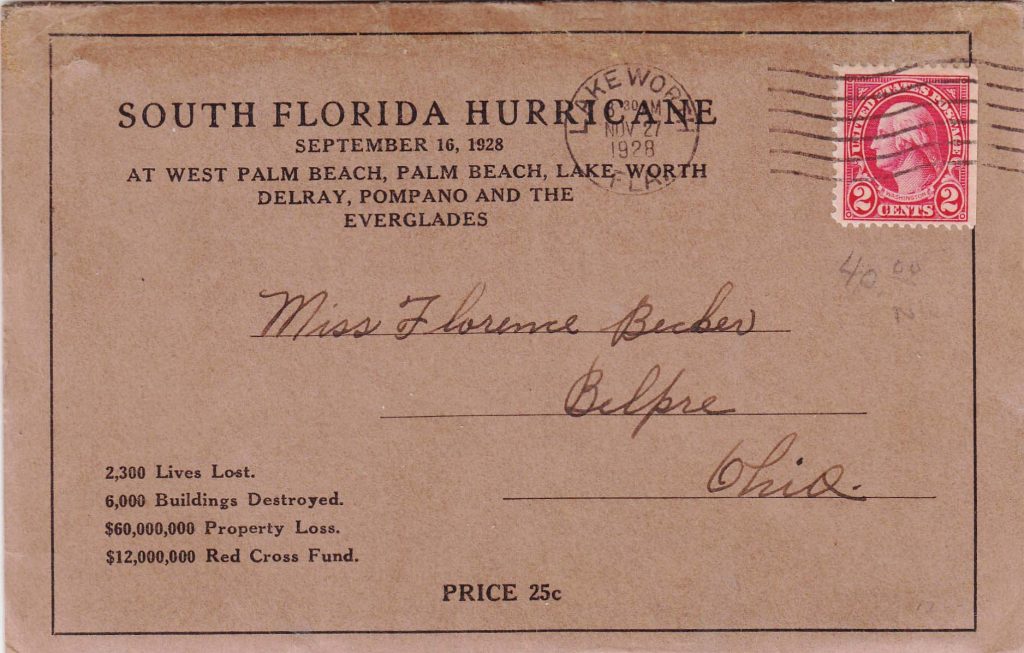 Cover of a picture folder showing storm damage
from the South Florida Hurricane of 1928.

In Florida, the hurricane is known as the Okeechobee Hurricane despite having landed initially as a Category 4 somewhere between West Palm Beach and Jupiter.  The original official death toll was 1,836 but the actual death toll may have exceeded 3,500, ranking it as one of the worst US natural disasters.  It is exceeded only by the Great Galveston Hurricane of 1900 (over 8,000), the Johnstown flood of 1889 (2,209) and the twin hurricanes of 1893 (2,000 each). Even the original official death toll of 1836 surpassed that of Katrina in 2005. 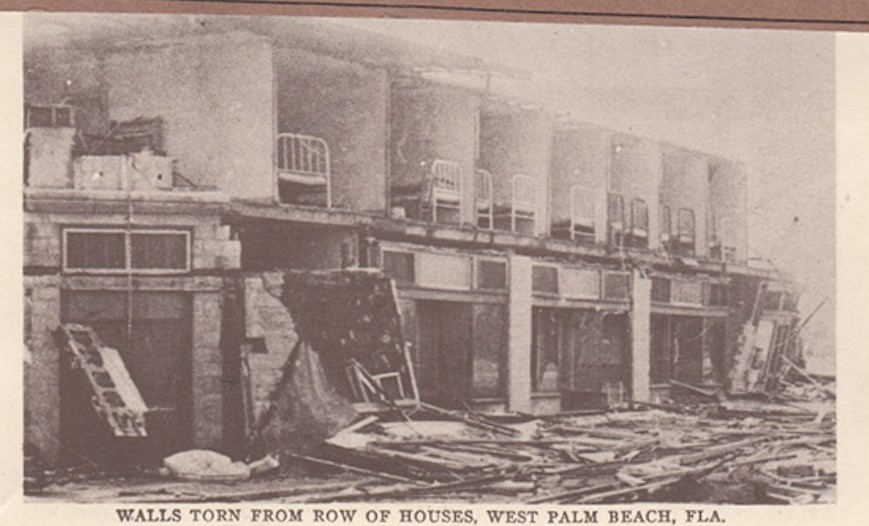 A significant factor contributing to the horrific death toll was the lack of advance warning.  Forecasting in Florida in 1928 depended heavily on weather stations located in Puerto Rico, which were destroyed on September 13th, at which point the Weather Service had effectively “lost” the storm.  The National Weather Service had previously issued bulletins that indicated the storm would either be minimal or would turn north and not hit Florida.  The information available to the Palm Beach Post as late as midnight on September 15 characterized the Weather Bureau as “optimistic” and that was what the Post printed for the Sunday morning papers.  By the time people were reading those papers the information was already incorrect.  Only on Sunday afternoon did the Weather Bureau finally hoist its distinctive black and red hurricane flag.  By 5:00 p.m. on Sunday the Weather Bureau issued warnings for the other parts of Florida but even then it stated the hurricane was “near” the coast when actually it had already arrived.

Even in the best of circumstances, it was difficult to disseminate hurricane warnings in 1928 – there were only newspapers, telephones and radios.  And many people, particularly those in the neighborhoods of West Palm Beach and those living in the interior, near Lake Okeechobee, had none of those resources.  It is hard to imagine in 2019, when many can instantly refresh their NOAA app on their cellphones, that in 1928 even radios were scarce and did not deliver constant news and weather. 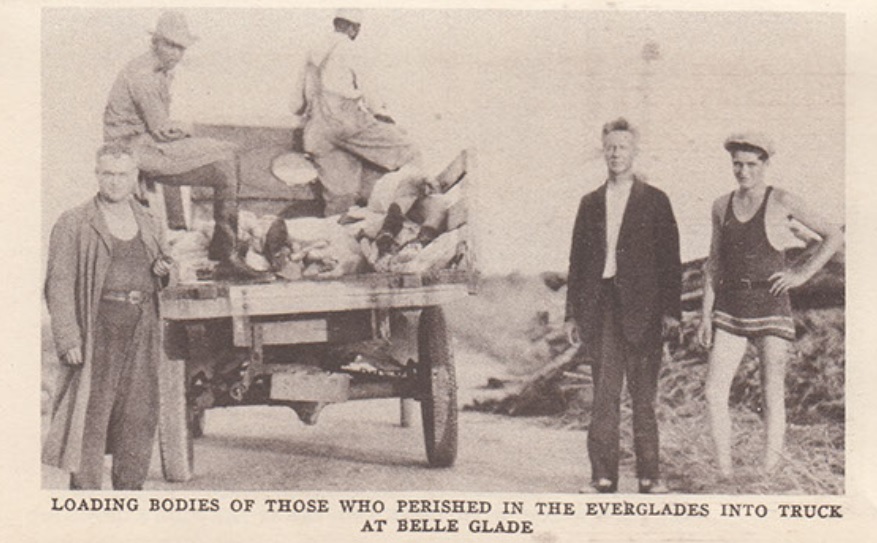 Most of the deaths occurred not on the coast but near the southern end of Lake Okeechobee.  Lake Okeechobee is the 3rd largest freshwater lake entirely within the US.  It is 33 miles long and 30 miles wide so it has the appearance of an ocean when you are standing on its shores.  However, it is very, very shallow, only 21 feet deep at its maximum.  When the hurricane’s winds circled around from the north and pushed the shallow lake water south (at a time when the lake level was already high from recent storms), the water surged up and over the five foot earthen dike protecting the southern edge of the lake. Unfortunately, this was the most populated sector.  Thousands of acres around the lake had been drained for farmland and many of the people living around the lake were black farm workers or migrants, primarily from the South or the Caribbean islands.  The storm surge flooded hundreds of square miles to depths as great as 20 feet. 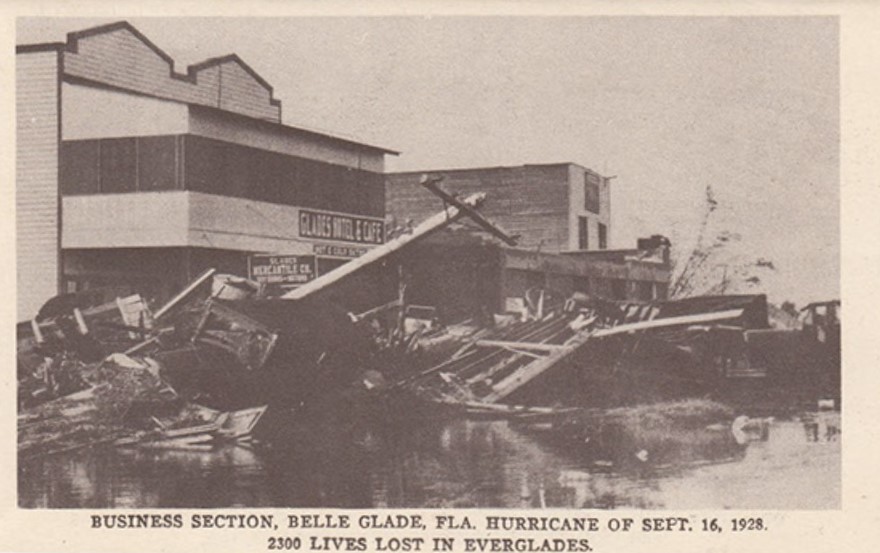 There had been discussions in the state legislature of building a larger barrier but they foundered over the high costs.  Dade County even brought a suit against a bond issue to build a new dike because they would have contributed 80% of the money but would receive only 20% of the benefits. Likewise, the federal government earlier in 1928 refused to allocate funds to Florida flood control.  Even after the hurricane there was resistance in Washington to fund flood control so a work-around was devised by calling the development a navigation project – a channel dug around the lake with the excavations being conveniently piled into a dike! 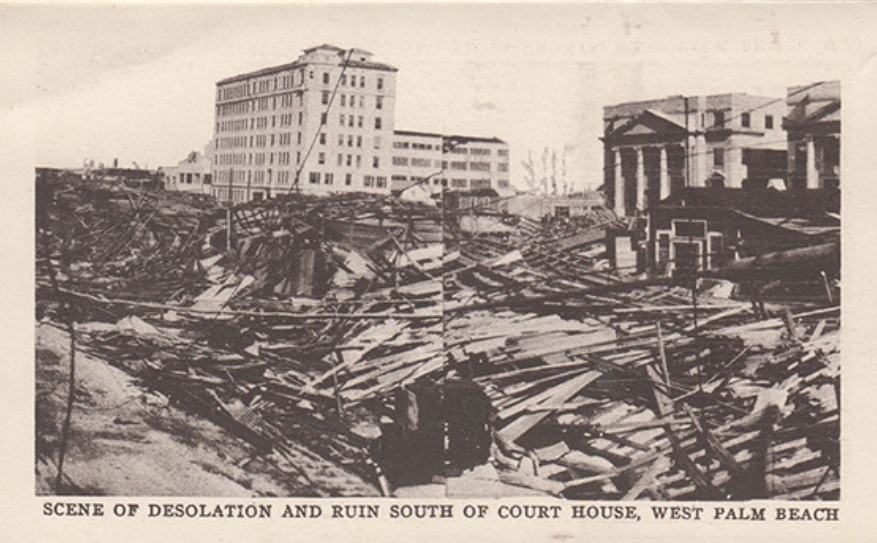 In the aftermath of the storm, the recovery efforts were delayed or stymied due to the lack of surviving transportation infrastructure.  Florida in 1928 had few, mostly poor, roads and was dependent on its railroads and inland waterways.  Much of this was destroyed by the hurricane and flood.  The lack of food, water and medical care in the interior became so critical that, at the urging of Dr. William J. Buck, the only doctor for 6,000 people and a real hero of this disaster, who directed all women and children to walk east toward West Palm Beach forty two miles away so as to reach roads that were accessible to vehicles that could transport them to safety. Over 100 women, some carrying babies, made this exodus. 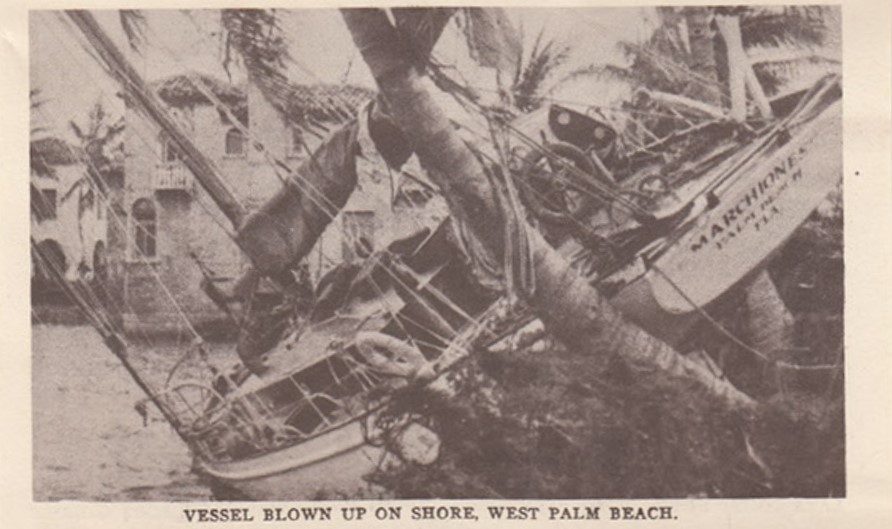 Cover of a picture folder showing storm damage
from the South Florida Hurricane of 1928.

The horror continued in the days and weeks that followed because it was difficult to discover and identify the human remains. In West Palm Beach, the debris was shoulder deep.  Only the county courthouse was still standing.  Around Lake Okeechobee, little remained. And if the destruction was dreadful, the racism that followed was uglier still.  White bodies were identified (when possible) and buried in coffins while black victims were buried nameless in mass graves.  Gangs of black workers were forced to clear debris and engage in the horrifying work of recovery of bodies.

A dike 36 feet high was completed by 1938 and dedicated in 1961.  It was named for Herbert Hoover who had approved the project in 1930.  However, farmers, fishermen, developers, environmentalists and Seminole Indians continue to wrangle over the lake and its barrier.  And the barrier has not always been properly maintained, leading some to wonder if there another similar disaster waiting to happen.  Fortunately, hurricane forecasting has become more accurate, and with the explosion of development in Florida and elsewhere, 50 million people are dependent on the accurate and prompt dispersal of NOAA weather forecasts.  But the danger continues to be the water.  The storm surge in Okeechobee, like that of Katrina, was the primary cause of death in those storms and there is little modern technology can do, apart from maintaining the dike and lake levels and supporting scientific forecasts and obeying mandatory evacuations.

Yikes! That hurricane makes Sandy sound like a piece of cake. Given the primitive photography, those cards are a real surprise.

I notice that the picture info on this disaster comes from a view folder! I have many view folders of US disasters of all sorts from 1906 and on as folders were the quick and easy way for vendors to market the many pictures made of these disasters. The full range of damage and suffering could be presented in one package to the interested public. Keep an eye out for these type folders the next postcard show you go to! bob toal – AKA “the folder guy”.

The largest freshwater lake entirely within the United States is Lake Michigan, with Alaska’s Iliamna Lake second and Lake Oahe (shared by North and South Dakota) third. Okeechobee is fourth, so I assume its ranking of third in this article is due either to the fact that Alaska is not one of the “lower forty-eight” contiguous states or the fact Oahe is man-made.