There are only a handful of locations on earth where “hell” is part of a place name. By count there are nine such places listed in the National Geographic Atlas of the World.  Among them are a city in Norway, a village in the Cayman Islands, a canyon, a mountain gate in British Columbia, and a Half-Acre in Wyoming.  Here’s another! 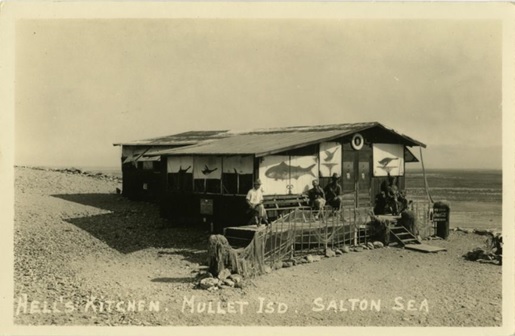 This real-photo postcard is part of the California Historical Photographs Collection in the University of California at Los Angeles’ Charles E. Young Research Library. It is a favorite of mine and I think it’s a curiosity worth sharing.

Imagine, for decades pioneers making their way across the North American continent have come to obstacles that presented nearly impossible challenges. Think what it was like for the first family making their way across northern Arizona and coming face to face with the Grand Canyon. Can’t you hear it in your mind’s picture of that event; Pioneer Husband says to Pioneer Wife, “Well, my dear, what do we do now?”

The Salton Sea must have presented another pioneer with the same challenge.

The Salton Sea is in reality not a sea but an often shallow saline lake in the Sonoran Desert – 130 miles east, south-east of Los Angeles.  Its location actually straddles the San Andreas Fault.  The Sea did not exist before 1905 when a flood along the Colorado River flowed over the Imperial Valley dike and because there is no drainage due to the below sea-level elevation, the inundation consumed the town of Salton and the Torres-Martinez Indian reservation.

Visitors to the area in the early years would have found this café along the edge of the land formation known as the Salton Sink – a refuge for birds and other desert fauna.

It is unknown if fish dinners were on the menu.