When I saw St. Mariacka (St. Mary’s) it was very different from the picture on this postcard.  On a warm day in late September, the dim interior of this church was a welcome relief from the searing sun and blinding light of mid-day.  The languages around me that day were Polish and English and the people of Gdansk were worried about the health of their Pope, but happy to be going about their daily routines knowing they no longer had to deal with the tyranny of a regime that once occupied this city without apology.

This postcard is German. It is a reproduction of an original lithograph by an artist named Bendrat.

The caption is, “St. Marien in Danzig” and on the back someone has written, “Danzig, Germany, 1910.”

Gdansk was a much different city in 1910 and in the years leading up to 1945, when the city was called by its German name, Danzig, the population was 96% ethnic German and St. Marien’s church served a German congregation. 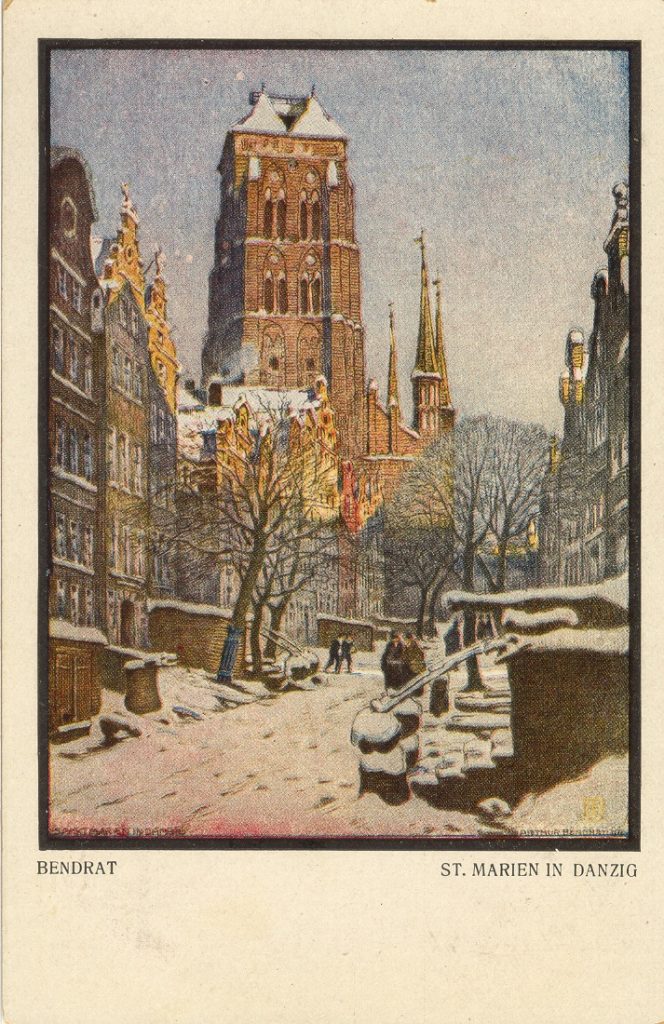 St. Mary’s is reputed to be the largest brick church in the world.  The foundations were dedicated in 1343 and the last of the masonry work was completed in 1496.  The church sustained war damaged by Red Army bombings in March 1945, but a complete restoration was celebrated with a reconsecration on November 17, 1955.

A tour guide insisted on telling us the number of bricks, but who cared?  What I cared about was my extraordinary good luck to be visiting Poland over a thousand years after Saint Adalbert was sent by the Polish King, Boleslaus the Brave, to Gdansk to baptize the inhabitants in 997.

Located on the south shore of the Baltic Sea, Gdansk and her sister cities Sopot and Gdynia are proud of the contributions they have made to their country and the world.  Remember “Solidarność” (Solidarity Trade Union) and a fellow named Lech Wałęsa who worked at the   Gdansk shipyard?  All that happened less than five miles from St. Mariacka in Gdansk, Poland.