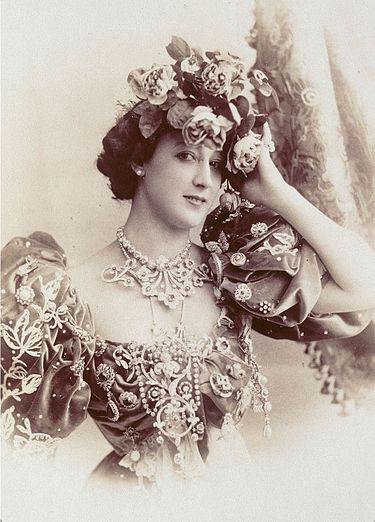 This 1910 era photograph, later made into a Reutlinger postcard, pictures a woman named Caroline Otéro.  Biography on Ms. Otéro is scarce, but we know a few things about her that put her in that class of women known as the Grand Dames of the Theatre.

After she gained fame in the theatres of Europe, she seldom used the name Caroline and became known as La Belle Otéro.  Her career as an actress, singer, dancer, and for the lack of a more genteel term, courtesan, took her to St. Petersburg, Moscow, Paris, London, Buenos Aires, Rio de Janeiro, New York and other world capitals.

The press was not kind to Miss Otéro.  She was accused of being the lover of no less than six crowned-heads of state – including King Edward of England and Czar Nicholas of Russia.  Similar accusations were leveled at the kings of Spain and Serbia, the Grand Duke Peter, and the Duke of Westminster.  It is a fact that at least two men fought a duel over her, and another committed suicide because of her rejection of his advances.

Caroline Otéro was born in Barcelona, Spain, in 1868.  Her family life was unstable and her parents cared little if Caroline was part of their family.  She left home at age twelve and found small jobs in cafes, bordellos, and music halls.  By 1889 she had worked her way to Paris, where she joined the Follies Bergere at the age of twenty-one – somewhat old by comparison to most Follies stars.

In her second Follies season, Le Belle gained instant notoriety with her new, self-designed stage act.  She had worked hard in the decade after she left Barcelona and had acquired much wealth; most of it in the form of jewels, precious gems and pearls.  With the help the Parisian haute-couture designer Collette, Otéro created a wardrobe of outlandish costumes that included diamond and pearl brassieres. Naturally most men ogled her and the women were jealous.

Legend has it that Le Belle Otéro was the darling of so many that her breasts became the inspiration for the two cupolas on the Carlton Hotel in Cannes, France.   No argument could change the minds of those who believed that, but if you’re curious, the Riviera’s most famous hotel is pictured below.

Caroline Otéro acquired and squandered several fortunes.  She enjoyed the casinos of Monte Carlo and was never bashful when spending her money.  She paid nine million francs (in US dollars of today:  $15,000,000) for the home in the south of France where she retired shortly after World War I.

Miss Otéro died in 1965 at the age of 97. She died penniless, but to Caroline Otéro that did not matter; her dignity was intact and her most notable features were immortalized at the Carlton Hotel.

The Carlton Inter-Continental Hotel is located in the center of Cannes, the French Riviera’s most dazzling resort.  The hotel has welcomed an international clientele since it opened in 1912 – a unique hotel where hospitality, coupled with service and the treasured art of discretion, reign supreme. Boasting panoramic views of the Bay of Cannes, the Carlton provides the perfect setting for the perfect luxury experience. The hotel’s 338 rooms, priced from $285 to $2,149.53 per night, reflect the style and ambience of the Cote d’Azur while providing the ultimate in comfort and luxury.

I happened to have few postcards of La Belle, in my collection.