A Not Nice Postcard Collection

I have enjoyed writing about some of the collectors I’ve met, but recently I met someone whose collection of postcards was somewhat disturbing.  To tell the truth, I was nearly sickened by some of the cards I saw. The collector agrees that his collection is unpleasant, but the cards have served a valuable purpose. Nearly all of the 300+ pieces have been scanned and are on file in two medical school libraries.

Pinheads
Most of the cards in the collection show the unfortunate victims of a medical condition called microcephaly. The individuals in question were often the main event in freak shows across North America and Europe when, especially in the 19th and early 20th century, personal privacy and political correctness was not part of our daily lives. It was in these shows that they were called pinheads, and unfortunately there were many synonyms, e.g., airhead, birdbrain, blockhead, bonehead, bubblehead, chowderhead, and more.

Famous freak museums similar to the Pickard in Scotland and others operated by men like P. T. Barnum and Robert Ripley caused the curious public to want more and more of those so afflicted to be exhibited. By the 1930s the demand for new “exhibits” was astonishing. The curious simply could not conceive of the humiliation and disgrace suffered by those on display.

Most of the pinheads were presented as they were, but others were likened to be a different species of mankind (e.g., “monkey men,” “bearded ladies,” and “woolmen”) and one was described as a missing link, and another as the last surviving Aztec. Famous examples are Kiko and Sulu (who were billed as brothers from Zanzibar) and Schlitzie the pinhead, who was featured in the 1932 movie Freaks.

The Disease and Treatment
The online encyclopedia, Wikipedia, defines microcephaly as a growth “disorder in which the circumference of the head is more than two standard deviations smaller than average for a person’s age and sex.” Usually a microcephaly head is congenital or it may develop in the first few years of life often stemming from a wide variety of conditions that cause abnormal growth of the brain or from syndromes associated with chromosomal abnormalities.

Microcephaly can also be associated with other conditions that are only indirectly associated with the nervous system, such as: alcoholism (which can result in the fetal alcohol syndrome disability), diabetes, chickenpox, rubella, and even radiation poisoning.

In general, life expectancy for individuals with microcephaly is reduced and the prognosis for normal brain function is poor. The prognosis varies depending on the presence of associated abnormalities. Generally there is no specific treatment for microcephaly.

Pinheads in Poetry and Art
The exploitation of those with microcephaly was so prevalent in the early 20th century that it was totally acceptable for poets and artists to use pinheads in their work. In Robert Lowell’s poem The Banker’s Daughter some characters are portrayed as pinheads.

Another more blatant example is the painting, Pip and Flip by Reginald Marsh, of pinhead sisters Elvira and Jenny Lee Snow, supposedly from Peru, which today hangs in the Art Institute of Chicago as an example of the New York based Ashcan School of Art.

Pinheads in Literature
A recent search of a major library’s online catalog confirms the curiosity about freaks of nature. More than 250 titles of fiction and non-fiction are now available. Most are classified under subject-headings such as freaks, freaks of nature, side-show characters, circus performers, and carnival acts. 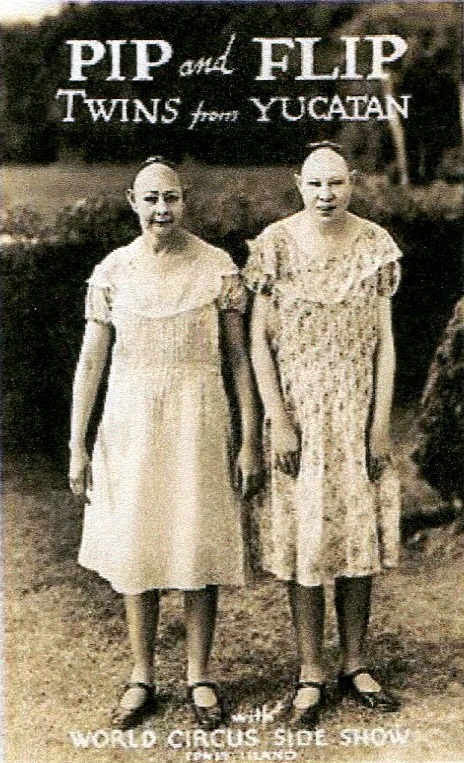 Pip and Flip with World Circus Side Show

The Story of Pip and Flip
Not from the Yucatan or Peru, but from Georgia, twin sisters Elvira and Jenny Lee were born circa 1910 to Robert and Lillie Snow of Hartwell, Georgia.

They “worked” as side show attractions at the World Circus Side Show at Coney Island, New York. The shows owner – a real scoundrel named Sam Wagner – paid their parents $75 a week to keep them “working.” They lived under lock and key for most of their lifetimes; not because they were dangerous but because they would disappear into the crowd at every chance they got. Pip was the most severely afflicted, having the mentally of a two year old; Flip functioned at the level of a six year old. One source of fairly reliable biographical information suggested that they would seldom eat regular meals unless they were given roasted peanuts for their performance. 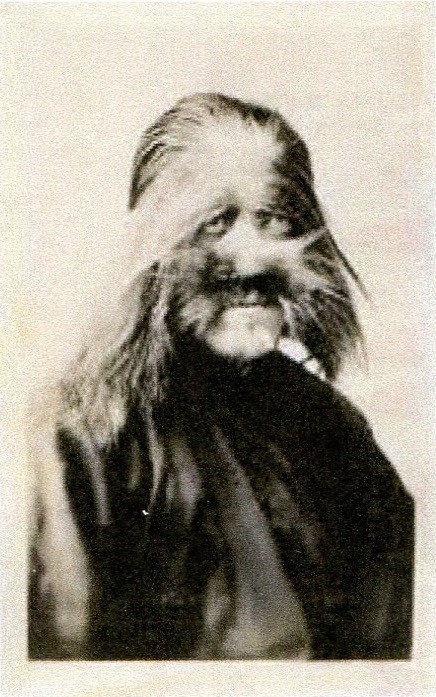 Others with hair, skin, face and head Anomalies
Annie Jones, the bearded lady; Li Po Sui, a woolman from the Hebei province of China, and the Lucasy family of albinos were others with international reputations as freaks who suffered the ridicule of the public throughout their lifetimes.

Postcards
Souvenir postcards of freak shows, freak museums, and circuses were once common. One of the all-time favorites was this one of Violetta, the half-woman, circa 1925, who was exhibited at the Dreamland Circus Side Show at Coney Island, N.Y. 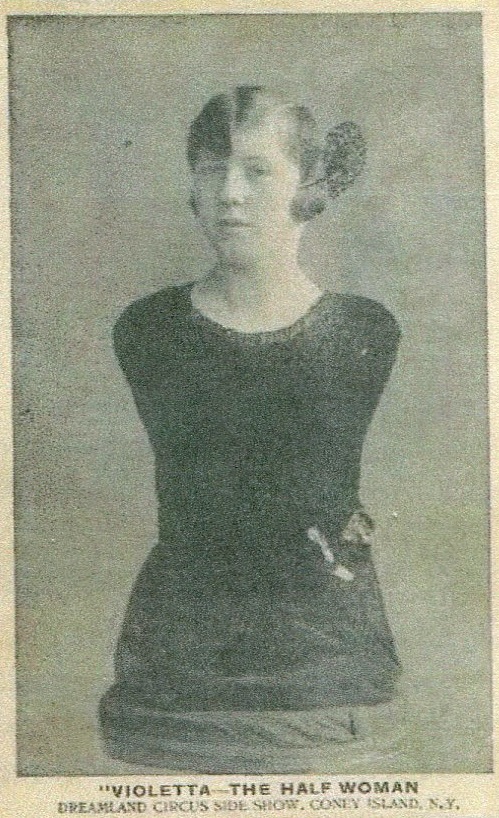 Today most sideshow, freak show, and circus postcards sell in the range from $20 to $50. Real-photos are considerable more.

Dr. Donald T. Matter, Jr., was a retired eye-surgeon from Long Island, NY. After giving up his practice, he moved to Arizona, but continued to collect postcards. He also traveled the globe doing eye-surgery on animals. When Don passed away his collection of more than 30,000 cards was auctioned.
PrevPreviousThe Cayuga County Totem Tree
Next“They ran off to Gretna Green to get married!”Next
0 Comments
Inline Feedbacks
View all comments
0 0 votes
Article Rating
Menu