FYI: Cayuga County, NY, is the center-most of the three counties that form New York State’s Finger Lake Region. Some of New York’s finest vineyards are in Cayuga County where wines are made that have won awards worldwide.

This postcard truly tells its own story from the caption on the back, the sender’s message and the August 1, 1926 front page of the Pittsburg Post-Gazette.

This curiosity of Southern Cayuga is situated at Barber’s Corners, one mile west of Scipioville, and three miles east of Levanna, on a well-kept lawn.  It was carved out of a trunk and lower branches of a good-sized tree in the summers of 1911 and 1912 by George E. Carr, a soldier of the Civil War of 1861 and 1865.  This totem tree might be called one of the wonders of the age as the phrase “Nothing like it” can be applied to its many unique features.  The idea was borrowed from the Totem Poles of the Alaska Indians, but it is much more artistic in its execution, the inequalities of the tree and branches being carved into such figures as suited their shape.  There are forty figures on all sides, consisting of animals, birds, and portraits which are painted in various colors to make them prominent.  This tree is about eighteen feet high and is viewed by many strangers who pause to give it more than passing notice. 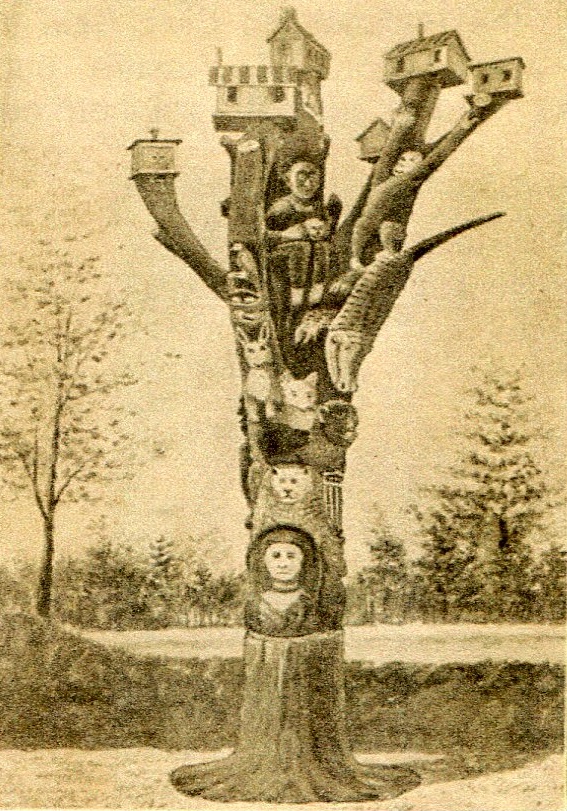 Mary, will enclose this in a letter to the girls.  This is only one of the many carved pieces in the yard.  It was well worth the trip and when you come here again be sure and see it.  Hope you are feeling better than when you wrote.  Milton

In August 1926 the Pittsburgh Post-Gazette reported:

Moravia, July 31. – One of the greatest loses and one that cannot be measured in dollars and cents resulted from the miniature tornado that swept over this section Thursday of last week was the loss of the cleverly carved totem tree on the lawn at the home of George E. Carr at Barber’s Corners in the Town of Scipio.

The high wind toppled over the tree, the wood of which was so decayed that it was smashed beyond repair when it struck the ground.  Fortunately other works of art on the grounds were spared by the elements and there is still much to attract visitors to the spot that has become known throughout the country.

The history of the totem tree is well known.  In 1911 a hard maple died and Mr. Carr with plenty of time on his hands and being handy with tools conceived the idea of carving some figures on the tree.  Starting with a women’s head he continued his pastime until 40 figures of birds and reptiles adorned the tree which became as the totem poles of the Alaska territory.

After the tree was completely covered Mr. Carr turned his talent to other places and faces began to appear on other trees about the lawn.  Stones of curious formation were added to the other articles and the collection became famous.

Visitors from all parts of the country came to Barber’s Corners.  Many enjoyed a chat with Mr. Carr, who has the honor of being a Civil War veteran and who has the unique distinction of having served his country in both the army and navy during the rebellion.

Of late Mr. Carr has been rather infirm and is confined to his home the greater part of the time.  Mr. Carr however was able to view the ruins of his totem tree following the passing of the storm.