There are few collectors of view cards showing structures designed by a named architect. I know a few, but among them those who collect Frank Furness’s work are the most successful.  Let’s look at a few and learn what a remarkable man Mr. Furness was and how amazingly unique his work was. 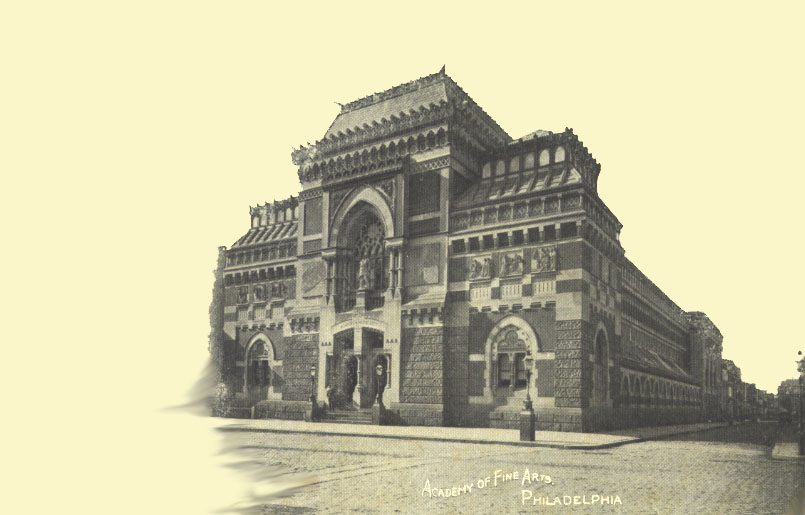 First, the masterpiece – The Academy of Fine Arts, Philadelphia. A circa 1907 undivided back mailed in Elmer, NJ In November 1871, at nearly the pinnacle of his career, Furness won the commission to design an arts academy building to be erected on North Broad Street in Philadelphia.  The exterior of the building is considered a Second Empire style composition enriched with Victorian gothic details.  The corner stone on this site was laid in 1872 and the building opened in April 1876.

At the other end of the Delaware Valley in the Victorian Seaside resort of Cape May is the home of the emanate Dr. Emlen Physick.  Since the 1990s the estate has been a museum and the offices of the Mid-Atlantic Center for the Arts.  The home was built in 1879 in what was then called the “Stick Style.”  It has eighteen rooms.

One of the Furness structures that expands the imagination is the Cordelia Stanwood House in Ellsworth, Maine (Stanwood, born in 1856, was one of Maine’s earliest ornithologists).  Architectural historians disagree about the style but it is generally thought to be a Cape Cod-style house.  Built in 1850 it is among the first dozen of Furness’s creations and it set a tone for his entire career. The 130-acre estate is now a museum and bird sanctuary. You can trail-hike and visit the home – still decorated with period furniture and a large collection of mounted birds.

The Brooke Mansion, in Birdsboro, Pennsylvania is an elaborate example of how Furness used fine ornate woodwork.  The 42 room mansion, constructed in 1888 as a wedding present for his wife by industrialist Edward Brooke, is a three-story house that contains a magnificent foyer with a grand staircase, stained glass, ironwork, and a circular rosewood library.

Now a bed and breakfast, nestled between Lancaster and Adamstown, it is a favorite of those who enjoy the area’s antique shops, flea markets, and the country hospitality.  Recently the Brooke Mansion Inn won an historical architectural prize for being preserved as a 95% original landmark.

Did someone say, “Train station?”  Oh, yes!  Furness designed over forty of them for both the Pennsylvania Railroad and the Baltimore-Ohio Line.  A nearby architectural jewel is the Gravers Lane Station in Chestnut Hill, Pennsylvania.

Collecting postcards is often a challenge, and for all collectors it is important to know a great deal about a topic before you begin.  I hope this article has stimulated some interest in Frank Furness, and let me show you my favorite Furness opus.

Ray Hahn is a retired educator, but he has never stopped teaching. His decades of researching, writing and editing a newsletter for the South Jersey Postcard Club has been a world-class education in trivia. In addition to postcard collecting, Ray’s other interests include history, genealogy, and touring the world with his wife Marie. Ray often advises his readers to "Join me as we explore the world one postcard at a time." Ray and Marie live in New Jersey.
PrevPreviousTwo Rhode Island Postcards
NextMaud Humphrey and Her ArtNext
2 Comments
Oldest
Newest Most Voted
Inline Feedbacks
View all comments
Mary Schaefer

The Wilmington, Delaware station was designed by Frank Furness. I passed through it before its renovation and admired it even in its state of disrepair. Today it has been updated for current travel yet maintains its elegance. I discovered the second-floor waiting rooms with white marble and large windows when the regular restrooms were closed.