The Legend of the White Canoe

The image of the White Canoe is meant to illustrate an occasional event in the lives of the native Americans, who lived in northwestern New York along the Niagara River or on the islands in the river: Squaw, Beaver, Grand, Buckthorn, Three Sisters, Goat, Bird, or Robinson.

The legend first appeared in English when Knickerbocker Press of New York published William Trumbull’s epic poem The Legend of the White Canoe in 1893. Today the ideal of “noble savage” is as disgusting as many other racial epithets, however in Trumbull’s day, it was a common and idyllic concept that native Americans were heroic custodians of nature, but cruel and uncaring with kith and kin when it was time to honor their spirits.

The introduction to Trumbull’s book reads; Long before the solitudes of western New York were disturbed by the advent of the white man, it was the custom of the Indian tribes to assemble occasionally at Niagara, and offer sacrifice to the Spirit of the Falls.

This sacrifice consisted of a white birch-bark canoe, which was sent over the terrible cliff, filled with ripe fruits and blooming flowers, and bearing the fairest girl in the tribe who had just attained the age of womanhood.

The story as told by Trumbull has six verses: Proem [Prelude], Wenonah, The Council, Kwasind, The Sacrifice, and Epilogue.

Enjoy Verse One, Two and Four:
Legend of the White Canoe
by William Trumbull (1861-1933)
I. PROEM.
MID the rush of mighty waters, in the thundering cataract’s roar,
Where Niagara’s streaming rapids down in headlong torrent pour;
Where the serried waves like chargers madly leaping to the fray,
Fling aloft their snowy crests and toss their manes of flying spray,
Rearing, plunging, onward urging Nature’s glorious cavalry!
Where th’ eternal sweep of waters like the unending surge of time,
Pulsing, throbs in rhythmic measure to a wondrous strain sublime:
Dwells, so ancient legends say, the mighty Spirit of the Falls,
Who from out the tumult, hoarsely, for unbounded homage calls.
Here the children of the forest, spellbound by that deafening roar,
Stopped to gaze with listening wonder, in the simpler days of yore;
Awe-struck, gazed in silent worship, well beseeming Nature’s child,
As in chase they roamed the plain, or tracked in war the pathless wild:
And as often as they listened, on the voices of the flood
Deep were borne the Spirit’s mutterings, calling fierce for human blood;
Ay, and sacrifice more cruel in that cry they under stood:
Gift of Nature’s choicest treasure, peerless budding womanhood!
II. WENONAH.
FAIREST of the laughing daughters by blue Seneca’s rippling tide,
Was the Indian maid, Wenonah, sturdy Kwasind’s joy and pride:
Eyes of laughter, like the sunshine dancing in her native lake,
O’er whose depths, anon, fleet shadows chasing cast their trailing wake;
Lips of tempting ruddy hue like mountain berries gleaming fair;
Raven locks, whose glossy lustre shone like dark-stemmed maidenhair;
Whilst rich mantling color tinged an olive cheek, whose crimson flush
Vied with flaming woodland leaves when touched with Autumn’s scarlet blush.
And the music of her laughter, when amid the joyous throng,
She, hailed Queen by all the maidens, led with merriest quip and song,
Fell in sweetest rippling cadence, sounding thro’ the leafy way
Like the purl of hidden brooklet murmuring soft in distant play;
As in freest fancy roving, far removed from cares or strife,
With fresh eager zest exulting in youth’s bounding sense of life,
Bright she moved, a winsome picture, framed by Nature’s matchless art
In all scenes of joy and beauty royally to bear her part.
Yet to scenes of mirth not solely was her sunny presence lent;
Truer was her simple nature, to a nobler purpose bent:
Only child of widow’d father, hers the sacred heritage,
With the charm of winning girlhood, to make bright his lonely age.
What tho’ ardently, nay fiercely, for her smiles the young braves strove
In all feats of savage daring — none as yet might claim her love;
She, with roguish, artless spirit, laughing in her gay caprice,
Found in loving, filial duty surer joys of heart-whole peace.
Just as when some sturdy giant of the forest, bending low,
Bows before the axe and toppling falls with mighty crashing blow,
Clinging tendrils, newly springing round the shattered trunk are seen
Swift to hide its prostrate ruin ‘neath a veil of living green,
Guarding, shielding, closely nestling to their riven parent stock,
Like mute sentient creatures fearful of rude gaze or heedless mock:
So the maid her lonely father tended with fond, jealous pride,
Steadfast, faithful to her trust, where none might woo her from his side.
IV. KWASIND.
NOR when, once the conclave over, striding back in anger wild
To the hut, where all unconscious of her fate, his darling child
Rose to greet his late home-coming, — did his flood of grief long-pent,
In a burst of manlier feeling find, e’en then, its fitting ven:
But in tones of measured calmness, self-repressed, and sternly brief,
He made known his tidings bitter to her gaze of wondering grief;
Nay, to that grim ordeal, harshly, bade her nerve her trembling frame,
For the welfare of her people, for the honor of his name!
Yet, in lonely midnight vigil, when beneath the unwonted strain,
Baffled nature rose rebellious, throbbing fierce in secret pain,
Vowed he threat of direst vengeance, breathing forth an ominous hiss
‘Gainst the doting, idle dreamer: — “Curse him, he shall die for this!”
Or as tenderer feelings, rushing with tumultuous ebb and roll,
Stirred to ruth the deep recesses of his inmost troubled soul,
Pity for her youth and beauty, doomed thus soon to fade and die,
Found expression mute yet touching, in a long-drawn secret sigh.
Or he dwelt on her obedience, on her silent fortitude,
Bowing to his will submissive, ‘neath a blow so harsh and rude:
And it called to mind her mother, gentle slave of days long fled,
Slain, alas! in hostile foray ere her noon of life had sped.
How might she have met this trial? — What her thought of him, who must
In the pride of false endurance, thus betray a father’s trust?
Till proud spirit, bowed in anguish, brooding thro’ the silent night,
Staggered ‘neath the strong temptation of a swift, inglorious flight.
Then, a sterner mood returning, pride resumed its wonted sway;
Bade him heed the tribe’s opinion ; pictured what his braves might say:
While he strove, with specious reasoning, which he well knew for a lie,
To assuage the qualms of conscience — outraged nature’s stifled cry!
Her obedience? — but th’ expression of a flattered vanity
At the tribute of the council’s silent unanimity!
Or if here, too, justice triumphed, muttered with contemptuous thought:
“After all, she’s but a woman!” — and in this a respite sought.
So the days dragged slowly onward, days of strife and varying mood,
As he watched her steadfast bearing from his gloomy solitude :
And one morn, the treacherous Meda, slain by hostile, unknown hand,
Slow was borne into the village by the young braves of the band.
None mistrusted sullen Kwasind, when the funeral throng drew nigh,
Or, at least, none cared to question with that scowling warrior by.
But th’ event was soon forgotten ‘mid the press of other calls,
And the stir of preparation for their long march to the Falls.

Each verse was illustrated by Frank Vincent DuMond, an accomplished artist and engraver who also worked to illuminate books by Mark Twain and other of his contemporaries. In his later years DuMond taught drawing to such notables as Georgia O’Keefe and Gifford Beal. DuMond’s work appears in the Corcoran Gallery (Washington, D.C.), the Pennsylvania Academy of Fine Arts (Philadelphia), and in the collections of the Hudson Valley Art Association and the Art Institute of Chicago. Those who collect exposition postcards are already familiar with his work – he is the artist who created the postcards used as souvenir tickets at the Chicago Columbian Exhibition of 1893. DuMond also worked on much of the art used at the St. Louis Expo of 1904.

From the verse titles we learn the names Wenonah and Kwasind – the maiden and her proud father. Two of Du Mond’s illustrations are seen below. 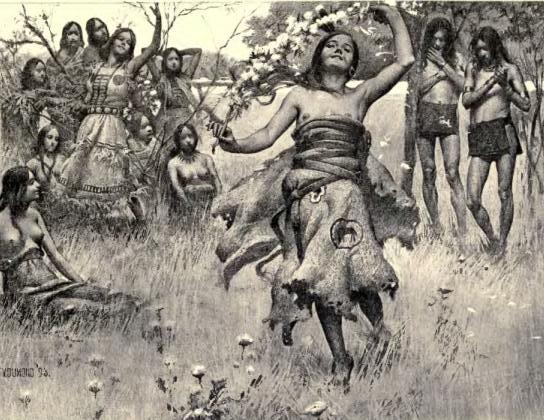 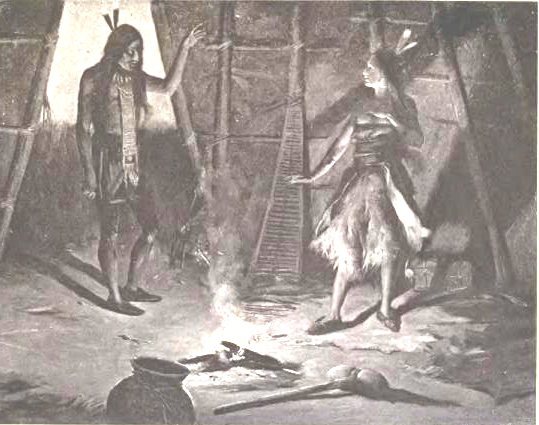 Wenonah, of course, is the maiden in the canoe and is remembered in legend as the Maid of the Mist. 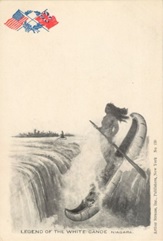 Postcards of the white canoe legend go back more than a century. The oldest found, so far, dates from 1905. It is an international friendship card common to the era. (Notice the Canadian flag is the old style Union flag. The Canadians adopted their maple leaf flag on February 15, 1965.)

A card from the late 1920s is postmarked 1927.  The message reads; Dear Family, We arrived here on Tuesday last and wish we had come years ago.  Hope to see you when we return.  Edith and Harry.

If you have an interest in reading the original epic poem, it is available online at the University of California, Los Angles, Library’s archive website. Go to http://www.archive.org/stream/legendofwhitecan00trumiala#page/n1/mode/2up 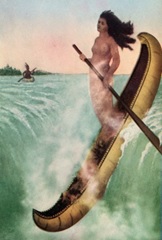 Ray Hahn is a retired educator, but he has never stopped teaching. His decades of researching, writing and editing a newsletter for the South Jersey Postcard Club has been a world-class education in trivia. In addition to postcard collecting, Ray’s other interests include history, genealogy, and touring the world with his wife Marie. Ray often advises his readers to "Join me as we explore the world one postcard at a time." Ray and Marie live in New Jersey.
PrevPreviousCrimes Against the First Amendment
NextEdith Cavell: a Postcard Caused Her MurderNext
0 Comments
Inline Feedbacks
View all comments
0 0 votes
Article Rating
Menu