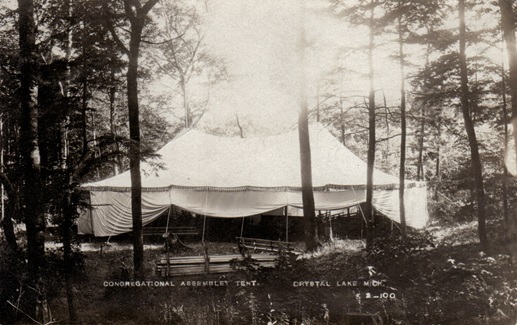 In northwest lower Michigan just north of the small town of Frankfort and nestled between the shores of Michigan and Crystal lakes, a small group of Midwesterners began the Congregational Summer Assembly just after the turn of the last century.

They began with Bible study in this p 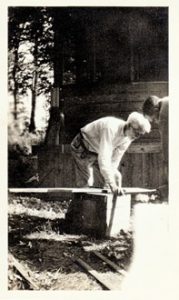 lace in the woods where they said “there ought to be a place…” My relatives were a part of this group and purchased a lot and began construction of a summer cottage around 1910.  Here my great grandfather Joseph Jelinek saws a board during construction.  The second image is his daughter Anna and her husband Vaclav Prucha at the porch door.  The cottage is named Naše Bouda, which translates from Czech to mean “Our Hut”. 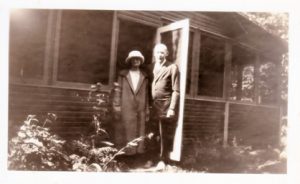 The land was heavily wooded with a young forest after having been logged by the Ann Arbor Railroad Company in the mid to late 1800s.  Below is a card showing a typical dirt road in the woods.  Still mostly unpaved today, the Assembly has the look and feel it did one hundred years ago. 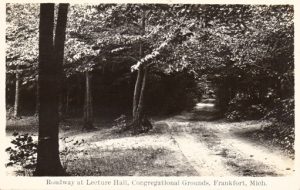 In 1912 the picture below shows the ride to and from Frankfort in front of the dinning hall and auditorium which still stands today and houses many events including potluck dinners.

I have been collecting images and postcards from the northern Michigan area for several years and my collection is displayed in the cottage, one of my most treasured finds (on eBay) is a postcard my grandmother Alma Prucha wrote to a family friend on August 8th, 1916.  Alma, born in 1900, would have been sixteen when she wrote the card. 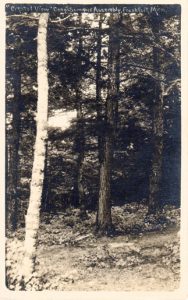 The front of the card is a typical forest view but on the back is a brief missive in Alma’s hand. Most likely the card was written in Naše Bouda where the card is now on display. 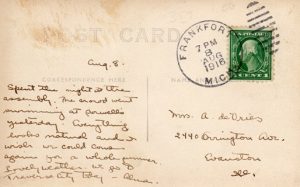 “Aug. 8. Spent the night at the Assembly. The crowd went swimming at Powell’s yesterday. Everything looks natural and I wish we could come again for a whole summer. Lovely weather. We go to Traverse City today – Alma”

Later in life Alma did spend her summers at the Assembly and luckily, I do too!

A lovely piece of history! Wonderful that the work of those who founded the Assembly so many years ago still bears fruit.

On behalf of the Benzie Area Historical Society and Museum and for UpNorth Memories Postcards and Paper Collectibles…Thanks for the CSA and Benzie memory! 🙂 Don Harrison – BAHS Admin Visit us at: http://www.facebook.com/BenzieAreaHistoricalSociety/