Approximately 125 miles north of New York Harbor, up along the Hudson, is a piece of property high above the river.  The view of the river valley, from dawn to dusk, is frequently described using only superlatives.  Words like spectacular, stunning, awesome, fabulous, magnificent and splendid come to mind.   And, on that spot stands a homestead named Olana.

In 1870 a prominent member of the Hudson River School of artists, Frederic Edwin Church started construction of what would be his family’s home for the next ninety-plus years.

Today, as part of the New York State Office of Parks, Recreation, and Historic Preservation, Olana is open to the public year-around.  It is truly a great day-out on a sunny-Sunday in winter.  The house and the grounds still have much the same appearance as they did in Church’s time there.

The brick, stone and cement exterior is in a Persian style characterized by recessed porches, projecting balconies, towers and an ell that served the artist as his studio and retreat.  The dining room, library, and a room they called the Court Hall are all equally fascinating for they are decorated with souvenirs the Churches brought home from their extensive travels in Europe, the middle-East, South America, and Mexico.

Frederick met his wife, Isabel, at a New York City exhibition for his painting Heart of the Andes (1859). In the few years that came after their marriage; Church became America’s highest paid artist. His audience clamored for his work and commissions valued in six-figures were commonplace.

By the late 1880s public interest in romantic realism had diminished, yet Church, who was afflicted with arthritis, continued to paint and his work sold as period pieces to galleries, museums, and private collectors.  Today there are nearly one-hundred of his paintings on public view, and estimates suggest three times that many in private collections.

As a member of the Hudson River School, Church worked among a cadre of artists whose work environs extended from the White Mountains of New Hampshire, south through the Adirondacks and Catskills, then south-west to the Delaware Water Gap or south-east to Long Island Sound.  More than twenty American painters, including Asher Durand (born in 1796, the oldest) and Thomas Moran (born in 1837, the youngest) considered themselves members of the group. Others such as Robert Duncanson was the first African-American artist to gain notoriety as a landscape artist; Albert Bierstadt, who later in life painted hundreds of canvases showing the Rocky Mountains, the Yosemite valley and the Alaskan Coastal Range; and John Frederick Kensett, whose work from New England and seascapes of coastal New Jersey, Long Island and New England is frequently found on postcards.

Visitor information is available at www.olana.org. 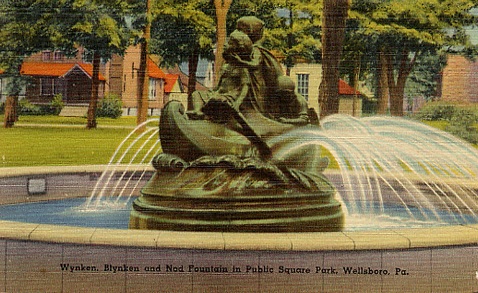 This Wynken, Blynken and Nod bronze statue sits in the center of the village green. It commemorates “The Dutch Lullaby” that was penned by Eugene Field in 1889. The statue was erected in 1938 to honor Elizabeth Cameron Bailey by her husband Fred Bailey. Fred and Elizabeth Bailey were natives of Wellsboro.

Wynken, Blynken, and Nod one night
Sailed off in a wooden shoe —
Sailed on a river of crystal light,
Into a sea of dew.
“Where are you going, and what do you wish?”
The old moon asked the three.
“We have come to fish for the herring fish
That live in this beautiful sea;
Nets of silver and gold have we!”
Said Wynken,
Blynken,

The old moon laughed and sang a song,
As they rocked in the wooden shoe,
And the wind that sped them all night long
Ruffled the waves of dew.
The little stars were the herring fish
That lived in that beautiful sea —
“Now cast your nets wherever you wish —
Never afeard are we;”
So cried the stars to the fishermen three:
Wynken,
Blynken,
And Nod.

All night long their nets they threw
To the stars in the twinkling foam —
Then down from the skies came the wooden shoe,
Bringing the fishermen home;
‘Twas all so pretty a sail it seemed
As if it could not be,
And some folks thought ’twas a dream they’d dreamed
Of sailing that beautiful sea —
But I shall name you the fishermen three:
Wynken,
Blynken,
And Nod.

Wynken and Blynken are two little eyes,
And Nod is a little head,
And the wooden shoe that sailed the skies
Is a wee one’s trundle-bed.
So shut your eyes while mother sings
Of wonderful sights that be,
And you shall see the beautiful things
As you rock in the misty sea,
Where the old shoe rocked the fishermen three:
Wynken,
Blynken,
And Nod.

I guess bedtime stories are things of the past, but even at my age, it is fun to remember when someone special read to me.  This poem by Eugene Field was a childhood favorite because my Aunt Elizabeth read it to me as I snuggled into an old fashion feather bed.

Eugene Field, orphaned at age 6, was forced to move from his native St. Louis to his cousin’s home in Massachusetts.  Best known for his essays and children’s poems, he was the son of Roswell Martin Field, the Missouri lawyer who represented Dred Scott in his landmark case against slavery in America.

Field died in Chicago at age 46, while working for a newspaper, but his most famous work is a collection of children’s poems that Maxfield Parrish illustrated with a picture entitled Dinky Park.