The postcards of Mount Rushmore tell a story that may not be well known. 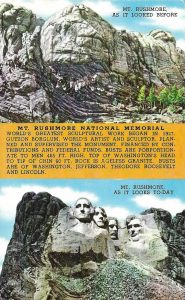 The card here shows Mount Rushmore before and after Gutzon Borglum carved the four presidents – Washington, Jefferson, Theodore Roosevelt and Lincoln. The mountain is named after a New York City lawyer Charles Rushmore. In 1885 he was in the area investigating mining claims. He returned annually to hunt big game. Through his association with locals and at his nudging, they began to refer to the mountain as Mount Rushmore and it became official in 1930. Prior to 1930, the mountain had various Indian and pioneer settler names. The Sioux called it “Six Grandfathers.” Other names were Cougar Mountain, Sugarloaf Mountain, Slaughterhouse Mountain and Keystone Cliffs.

The lower part of this card shows a scree of rocks below the figures (450,000 tons) blasted off the mountain during the carving. Precision dynamite use accounted for 95% of granite rock removal in sculpting the faces. Air hammers and chisels did the rest. The carving started in 1927 and finished in 1941. In all about 400 workers participated, averaging 30 workers on site each year. There were no worker fatalities. One of the stone carvers has been singled out recently for recognition. Luigi del Bianco, an Italian immigrant who was hired by Borglum as senior driller then later he was designated chief stone carver and assigned the task of carving detail in the faces. 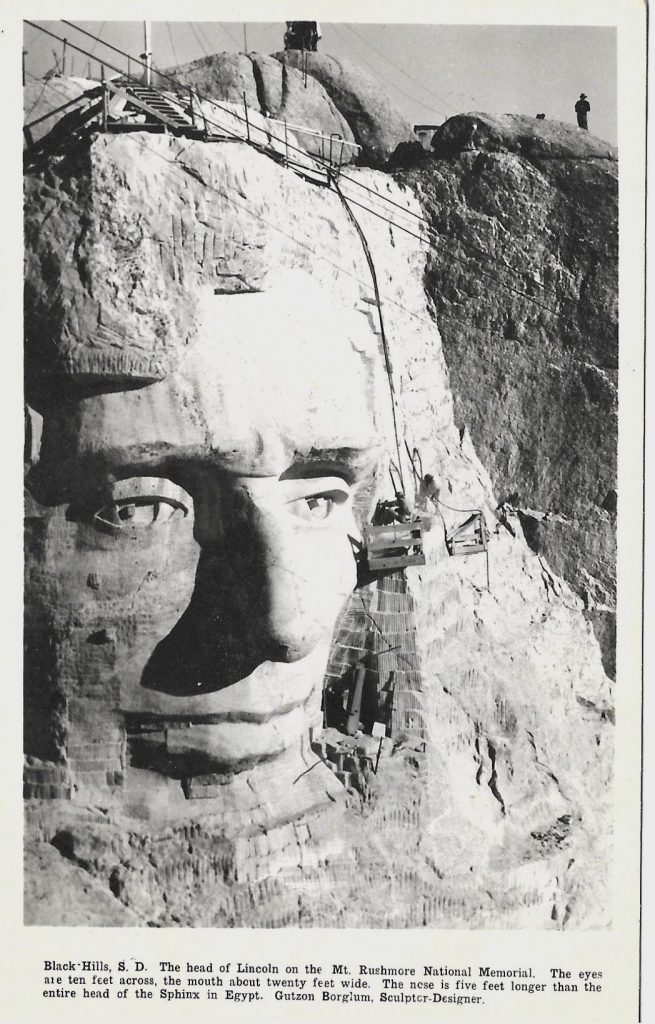 It is said that Korczak Ziolkowski, hired by Borglum, left the project after 19 days. Ziolkowski would later (1947) start to carve another mountain nearby – the Crazy Horse Memorial. Total cost of the Mount Rushmore monument was just under a million dollars funded by donations and the federal government.

HOW THEY WERE CHOSEN. Three men worked this out over time –  two South Dakota politicians (Doane Robinson and Peter Norbeck) and Borglum.  It is said originally a two man memorial was planned using Washington and Lincoln. Jefferson was then added to the line up. A model was made by Borglum showing three presidents that guided the initial mountain carvings. 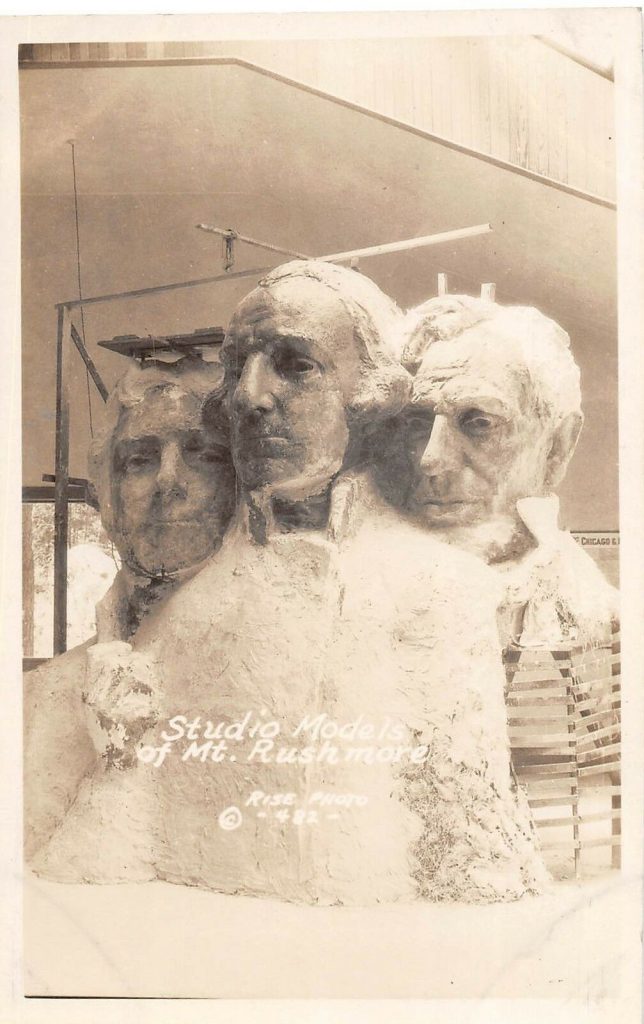 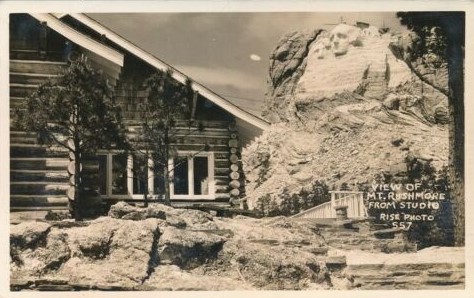 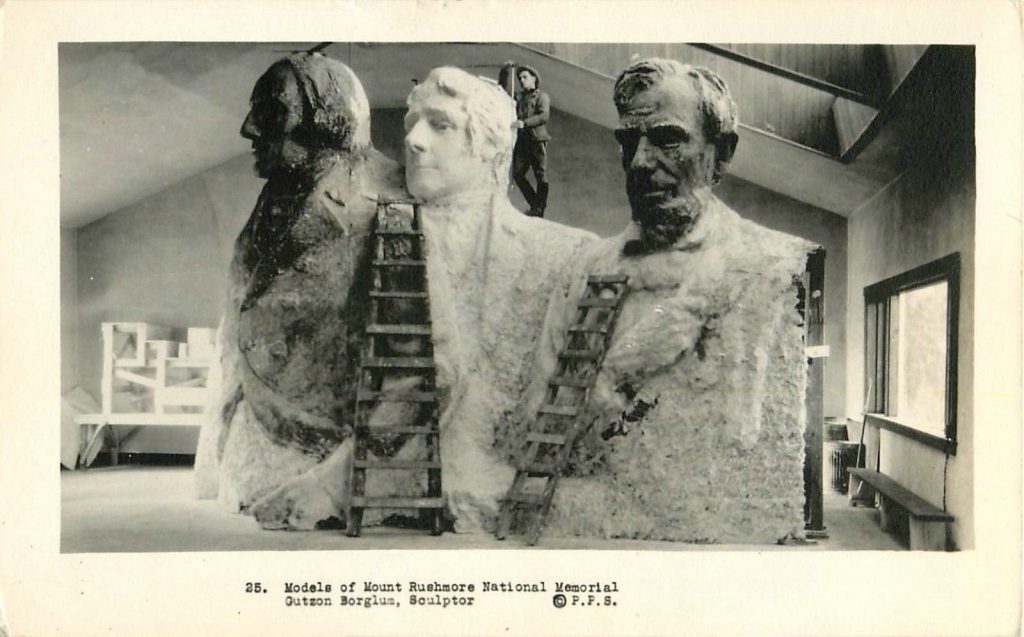 Washington’s head was mostly finished and dedicated July 4, 1930. Jefferson’s head was to be carved to Washington’s right, but after two years of work, due to excess quartz in the rock and deep fissures, Jefferson’s partially completed head had to be removed. It was dynamited off the mountain and smoothed over. A new model had to be made with Jefferson and Lincoln on Washigton’s left. Around this time it was decided to add Theodore Roosevelt. 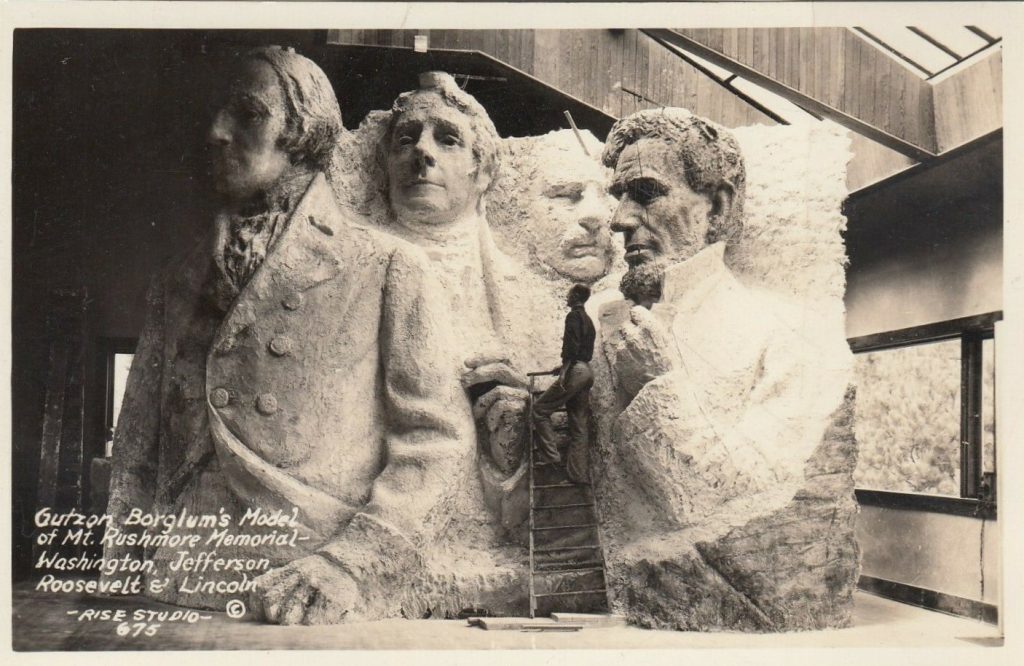 As can be seen from the last 2 models, the presidents were to be carved from the waist up if money was available. This never happened. 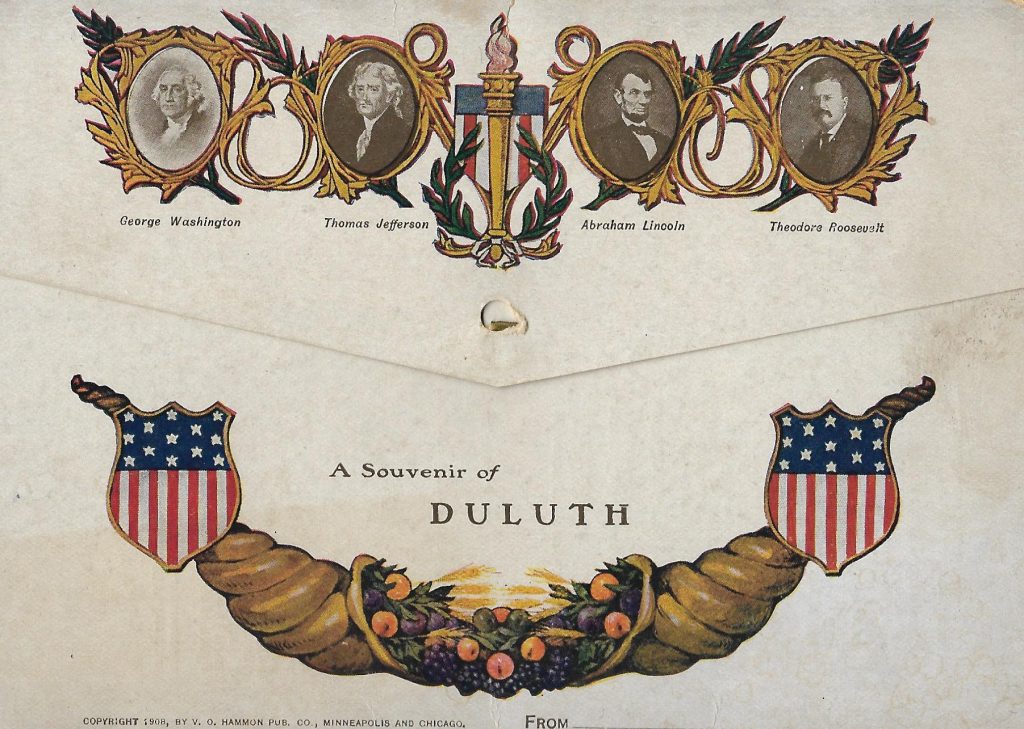 Borglum had also planned a large (80 x 100 ft) flat faced entablature shaped like the Louisiana purchase with dates and text carved documenting the history of the United States. It was begun in 1930 when the year 1776 was carved but had to be nixed when the bust of Jefferson was moved to Washington’s left. This shifted the Lincoln bust further to the right in the space where the entablature was to be. The entablature was scrapped in favor of a Hall of Records – a tunnel to be carved into the mountain behind Lincoln.

An interesting oddity is the reverse side of a 1905 souvenir folder published by V. O. Hammond that shows these same four presidents. All folders of 8 different cities made by Hammond have this design on the reverse without any explanation as to why they are shown. Perhaps it was for eye appeal. Roosevelt was in office at the time and the other three presidents were the “standard” big three touted for the birth and preservation of the republic.

HOW IT ALL BEGAN. The idea of carving figures in rock projections was discussed with Gutzon Borglum in August 1924 by Doane Robinson, a local politician and historian. He wanted to promote tourism in South Dakota. The plan was conceived a year earlier and Robinson wanted to know if it was feasible. He persuaded Borglum to travel to the Black Hills region for a first-hand look. At the time Borglum was involved with carving Georgia’s Stone Mountain Confederate Soldier’s Memorial.

Robinson’s idea was to carve regional heroes such as Lewis and Clark, Buffalo Bill Cody and Sioux Chief Red Cloud into the granite pillars known as The Needles. Borglum nixed that notion as the rock was considered unsuitable (too thin and tall – like totem poles) and the theme only had local interest. Borglum wanted to portray something with broader appeal and suggested Presidents. the nation’s 150 Anniversary in 1926 was only 1½ years off and patriotic themes were currently in vogue. During his second visit to the Black Hills in August 1925 Borglum chose the Mount Rushmore site due to its large size and grander location. At this time Borglum was 57 years old and in between jobs. 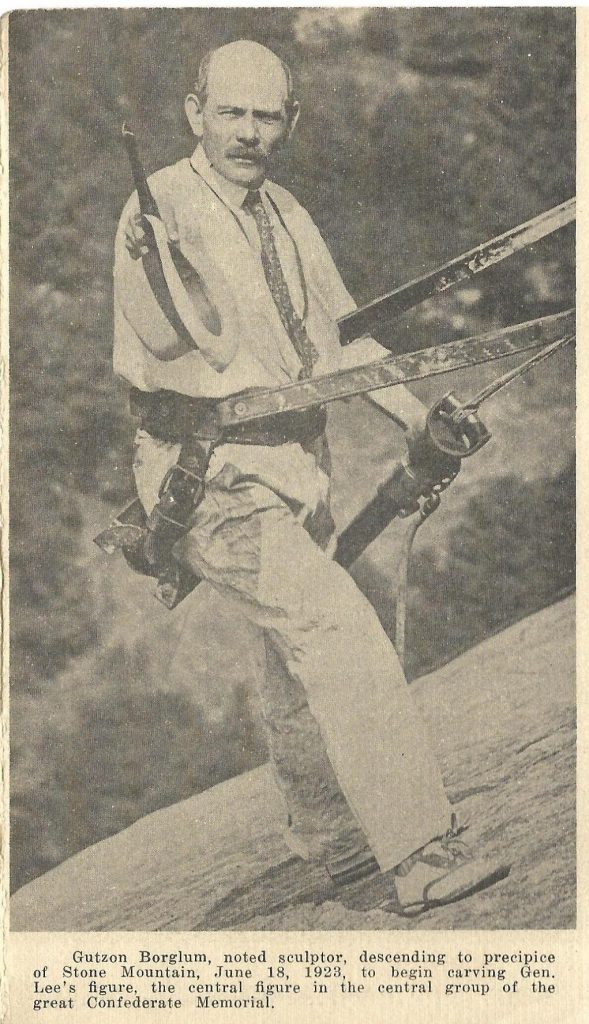 Washington’s image was dedicated July 4, 1930; Jefferson’s in August 1936. The Lincoln carving was dedicated in September 1937. Also, in 1937 a proposal to add Susan B. Anthony to the memorial was declined due to the lack of suitable rock and a rider on the original money grant limiting its use to images already in progress. The final dedication, honoring Theodore Roosevelt, was done 1939, but work on the figures continued for another two years. Borglum died March 1941, but his son Lincoln completed the unfinished work by October 1941, except that Lincoln’s left ear was never completed.

A hall of records was partially carved into the mountain behind Lincoln’s figure to potentially house historical documents. It was never fully completed as Borglum unexpectedly died.  In 1998 the National Parks System with the Borglum family put finishing touches on the Hall of Records. Modern postcards can be found that show the entrance to the hall. The last surviving Mount Rushmore carver, Nick Clifford died at the age of 98 in November 2019.

Bob Toal is an avid collector of postcard postal history targeting the birth and development of US postcards from their early beginnings to present. This includes early pioneer and private mailing cards as well as view folders, bi and tri-fold postcards, jumbo postcards and anything unusual in the postcard realm.
PrevPreviousOh . . . Olana, an Awesome Surprise
NextBaseball Park Postcard CollectingNext
3 Comments
Oldest
Newest Most Voted
Inline Feedbacks
View all comments
Rich Sauers

I have a number of Rushmore cards but nothing like these. Great article, great cards.

I very much enjoyed reading the article and adding it to my Mount Rushmore Collection. I am an avid postcard collector for my most favorite visited place.

As usual, another great article from Postcard History! Although my family and I were able visit Mt. Rushmore I learned so much more about it reading the great article by Bob Toal! Thank you.