Joel Reuter, a Chicago based sports writer editorialized on May 16, 2012, that “Nothing says summertime like a day at the ballpark, and while today’s baseball fan can literally catch every game with the addition of MLB Network [to his cable-TV subscription], it is simply not the same as being at the game.” There is magic in baseball parks and millions of Americans still love going to ballparks on every opportunity they can.

As the last thirty-three years have passed, my collections have increased, but my ballpark collecting friends have come nowhere close to increasing their collections with equal numbers of cards. I once left the York, Pennsylvania show very late in the afternoon, and the fellow with whom I walked out the door turned to me and asked, “Did you have a good show?” My reply was a simple, “Yes, did you?” He then said to me, “It’s been a great day, I found four cards from three different dealers.”

Naturally, that forced me to ask, “What do you collect?” His answer was, “Baseball Parks.”

I never met that man again, but Mike Franks from the Taconic Postcard Club in New York is another in the postcard collecting world, who collects baseball parks and he has put together a gallery of ballpark cards that shows how postcards make perfect souvenirs of your summertime visits to those halls that honor, America’s favorite pastime. 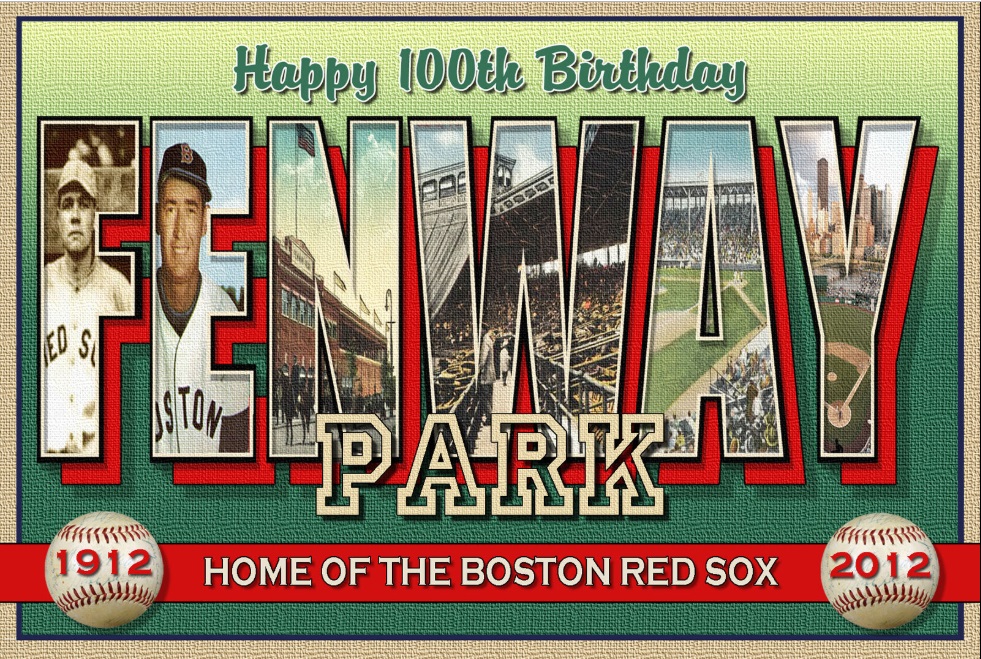 Between the 1980s and the 2000s there were several attempts to create newsletters for collectors of baseball stadium postcards. Each one died away but only after a lot of good information was exchanged. Much was written about the ballparks themselves, but maybe it just wasn’t a big enough hobby to support newsletters. Perhaps a small group of collectors were after the same truly scarce cards. Perhaps they ran out of things to checklist or write about. Highlights included conventions in Anaheim, Chicago, Cleveland and other locations, but one of the best was at Boston. There was good fellowship. I was involved.

It’s still a popular topic, the meeting of sports collecting and postcard collecting. All major league parks can be found, as well as many minor league parks. And some collectors have put out cards on their own.

[National Postcard Week – the first full week in the month of May is the perfect opportunity to create one’s very own baseball park postcard.]

Here is an array of several baseball park postcards from Boston.
Each major type of postcard is represented. 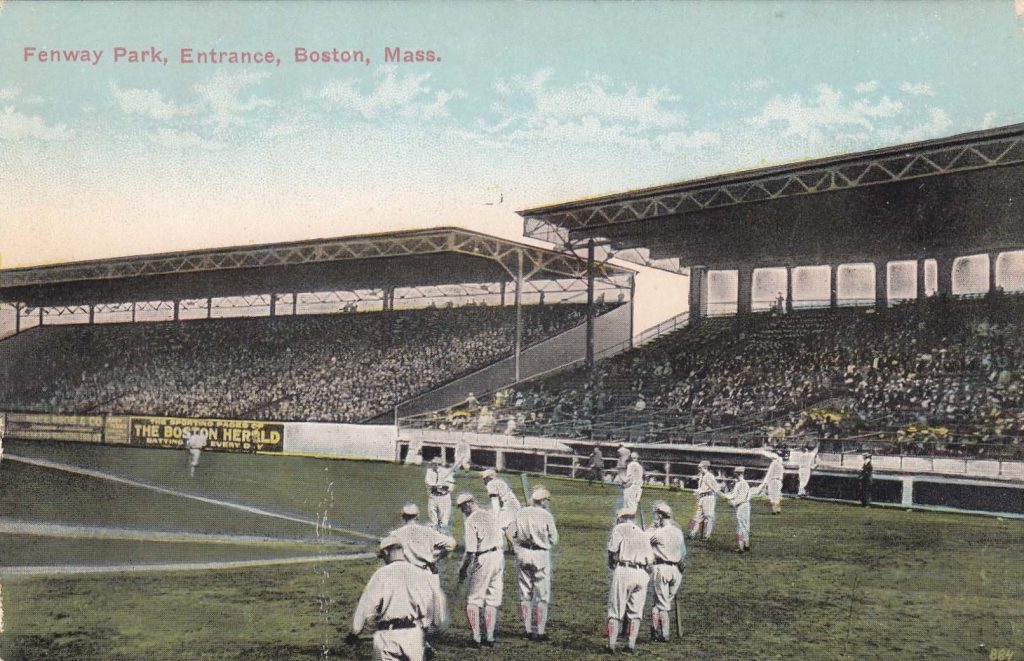 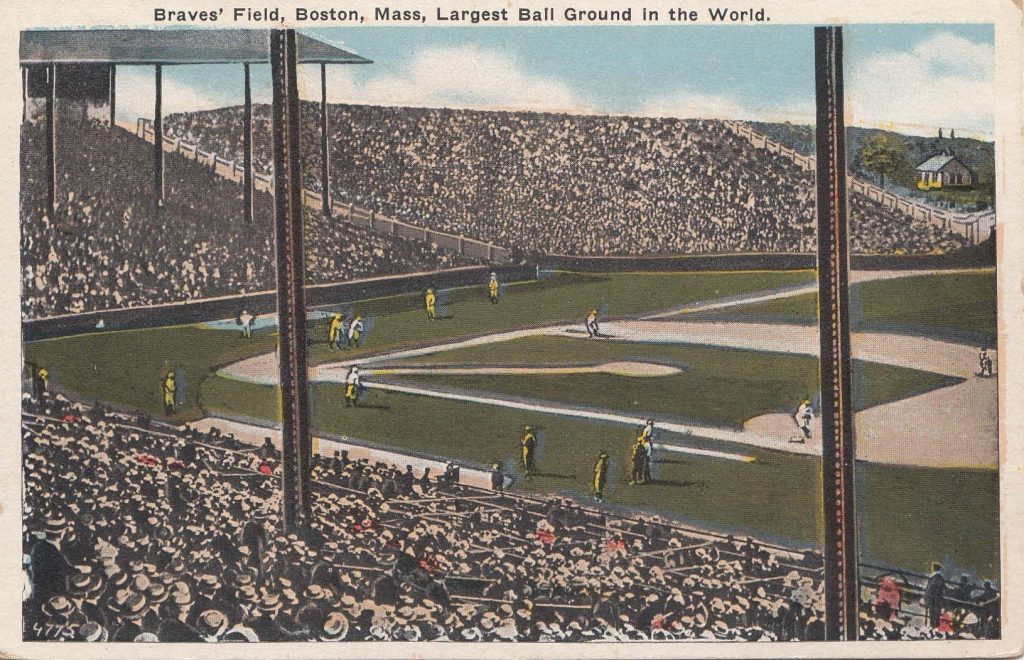 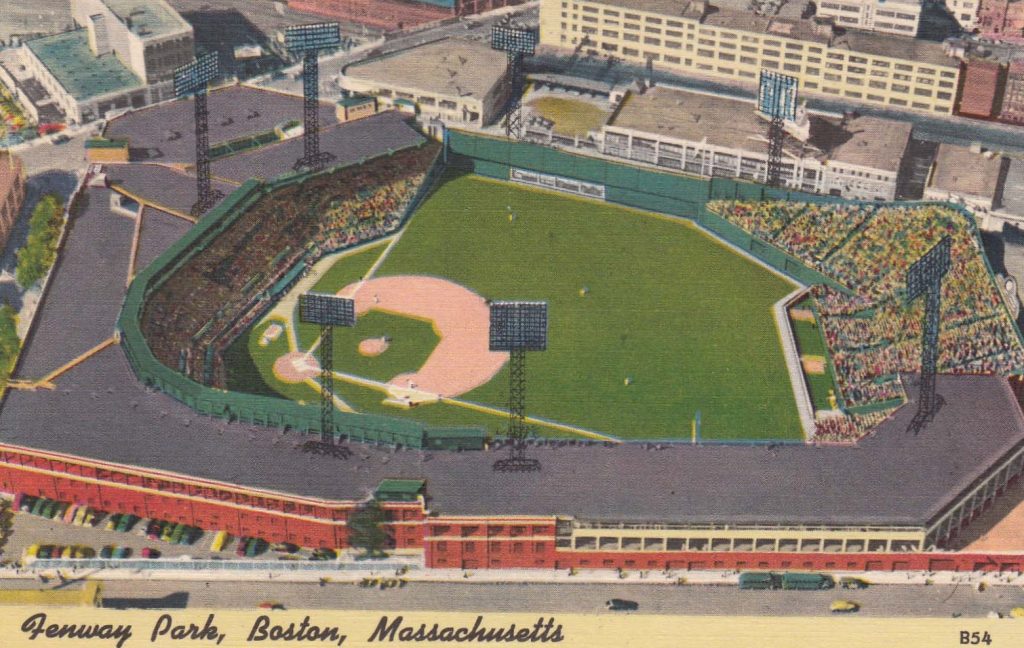 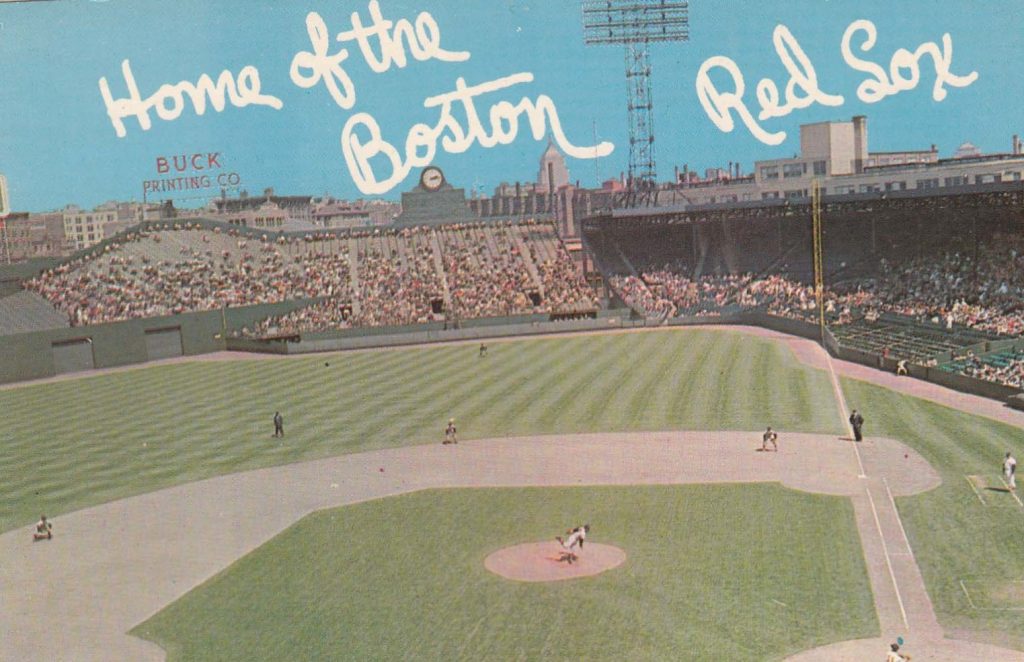 On the 1920s era card (top, left) notice the players on the field at Fenway Park. Many of the most valuable cards are of this type, as you’d expect such cards command high prices, with $40 being typical. The white border (top, right) shows Brave’s Field the onetime home of the Boston Braves.

Next there (bottom, left) is the once-popular linen style showing Fenway Park, Boston, Massachusetts. After that (bottom, right) is a regular size chrome and finally a continental chrome (below). 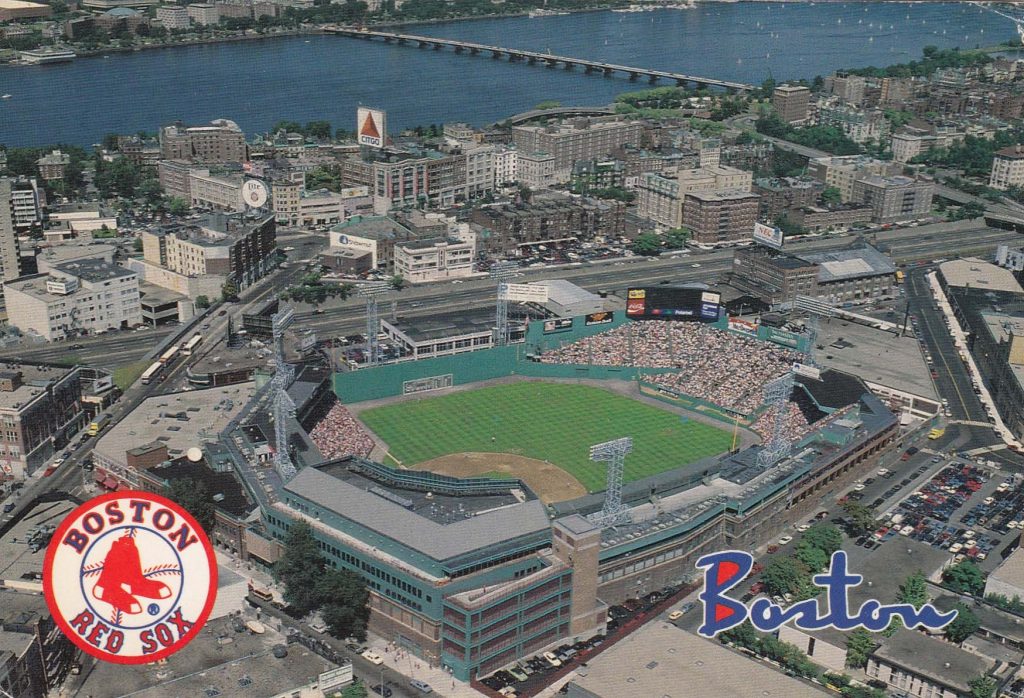 New continental chromes are coming out all the time. You shouldn’t be surprised to learn that airport boutiques are good places to find them. Check the airports.

If you want to see what other long-gone ballparks looked like, there are hundreds of postcards out there.

Look for some of these historic ballparks:

When you find cards from all the parks in this list you are then a tried and true ball park postcard collector. Let’s talk.

Mike Franks is a devoted member of the Taconic Postcard Club - the East of the Hudson River Club - and has been an avid Ballpark Postcard collector for years.
PrevPreviousMount Rushmore
NextS. S. Athenia: the first victim of warNext
1 Comment
Oldest
Newest Most Voted
Inline Feedbacks
View all comments
Bob Kozak

I knew a collector of baseball stadium postcards — wonder if he was a contributor and/or subscriber to any of the newsletters mentioned in this article.