THE WAY IT NEVER WAS

These days, I hear people bemoaning the commercialization of the holiday season. At least once during Black Friday, there’s a tale on the news of a shopper being trampled by a thundering horde galloping toward a big sale.

But in the wonderful world of postcards, there are never any arguments or disagreements, worries about money or seasonal stress. No one is pictured camping out in front of a store for days in the cold just to be among the first to stagger into the store to get that bargain. 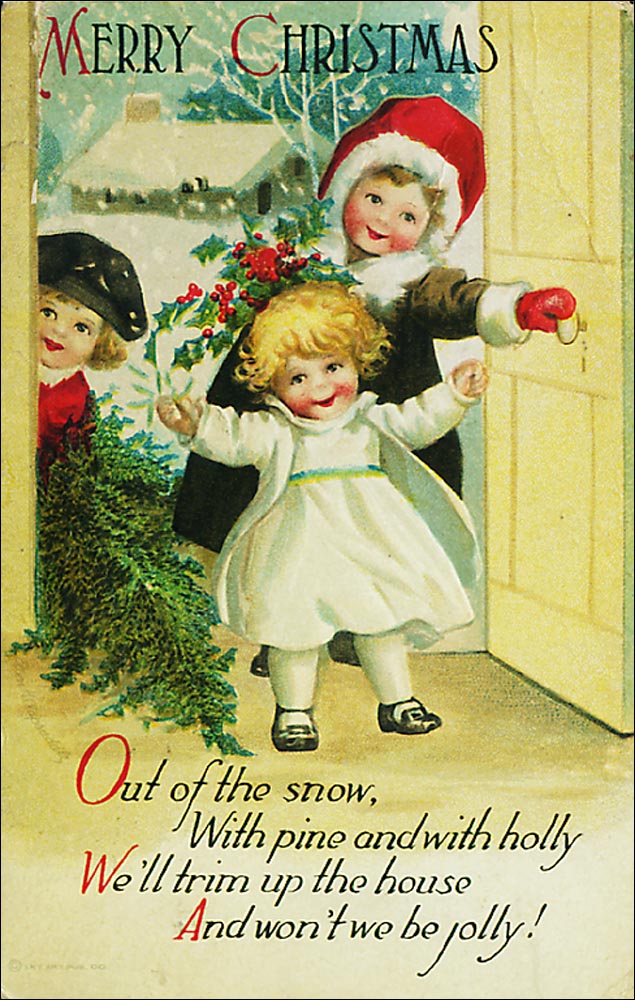 Children always smile at Christmastime so that Santa will know that they’ve been good as gold. Helping to decorate and “trim up the house” is a chore that all kids clamor to help with.

Christmas is a perennially happy time, filled with joyful wishes, dreams come true and the sweet mystery of Santa Claus. Let’s celebrate the way it never was and stroll through the idealized holiday in postcards from the turn of the 20th century to the 1920s.

Ah, the delicious anticipation of Christmas! For weeks leading up to the big day, the whole family is involved in preparations. From cleaning to cooking, from decorating to hanging the stockings, everyone is pitching in, relaxed and happy. 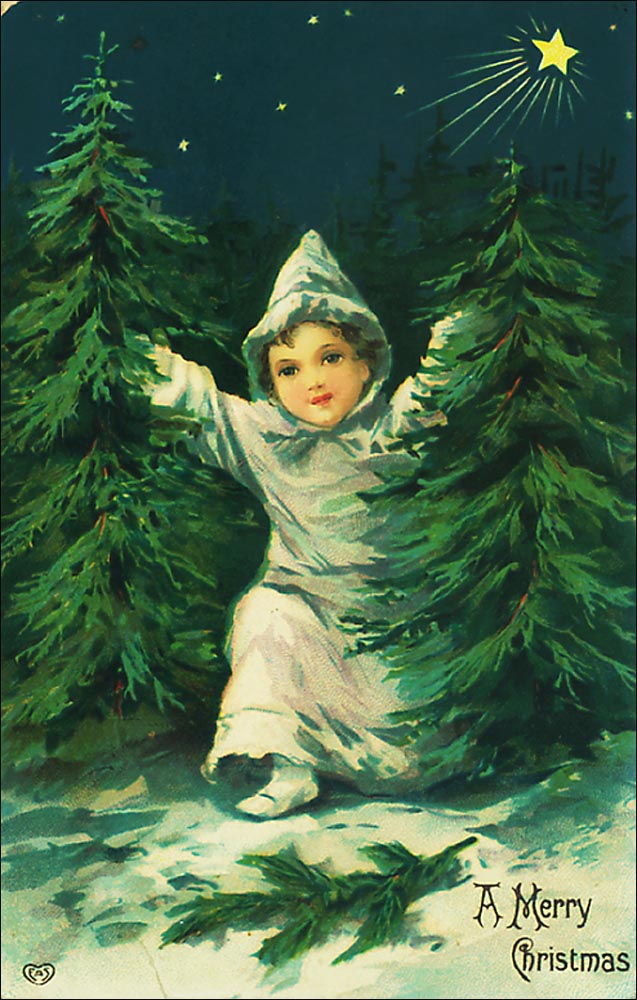 The Christmas star shines brightly as we stroll into the deep snowy forest with our children at night, looking for the perfect tree. Here comes our little one, holding two perfect specimens, with nary a speck of dirt on those white clothes.

In these simpler days, driving our horse and buggy through the snow and into the woods to choose our Christmas tree is the way everyone does it. How do you know which tree is best? Run your fingers along the needles and give the tree a shake. If the tree is fresh, the needles will bend and very few will fall off. We look for a traditional shape, rich color and lush branches. 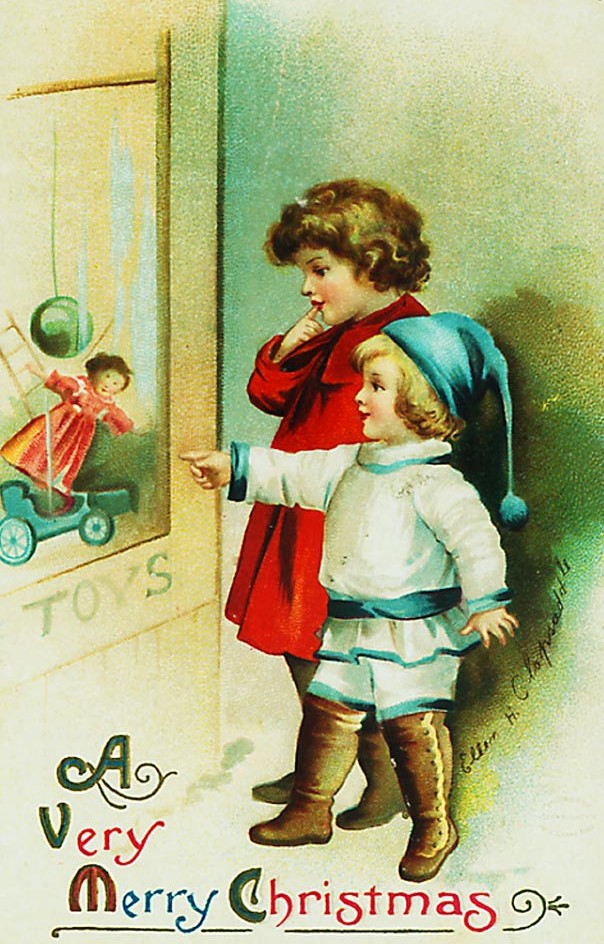 “Ooooh, I wish I had that,” these children appear to be thinking. No video games, tablets or iPods here.

Buying toys and other gifts “at the shops” isn’t as common as making presents for family and friends. Is your skill whittling toys or baking cookies? The quiet pleasure of using our own two hands to create something special for those we love is almost as good as the satisfaction we feel when they unwrap our gift and smile in surprise. 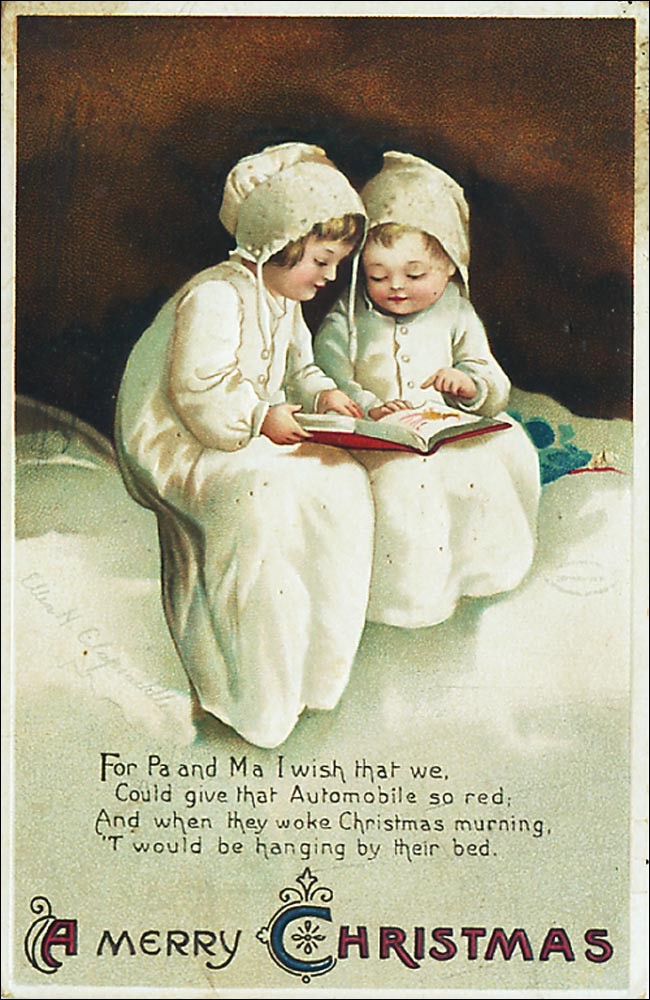 Here, poring over a book, “For Pa and Ma I wish that we could give that automobile so red.”

Christmas is a time for thinking of others. Both adults and children look for ways to “carry it forward” and do good deeds. In many families, it’s a tradition to leave a basket of food, clothing and other essentials on the doorsteps of the needy, anonymously. We might consciously seek ways to make people smile during our daily routine, paying a compliment or sharing a funny story. Planning gifts for others is a big part of the joy of Christmas. 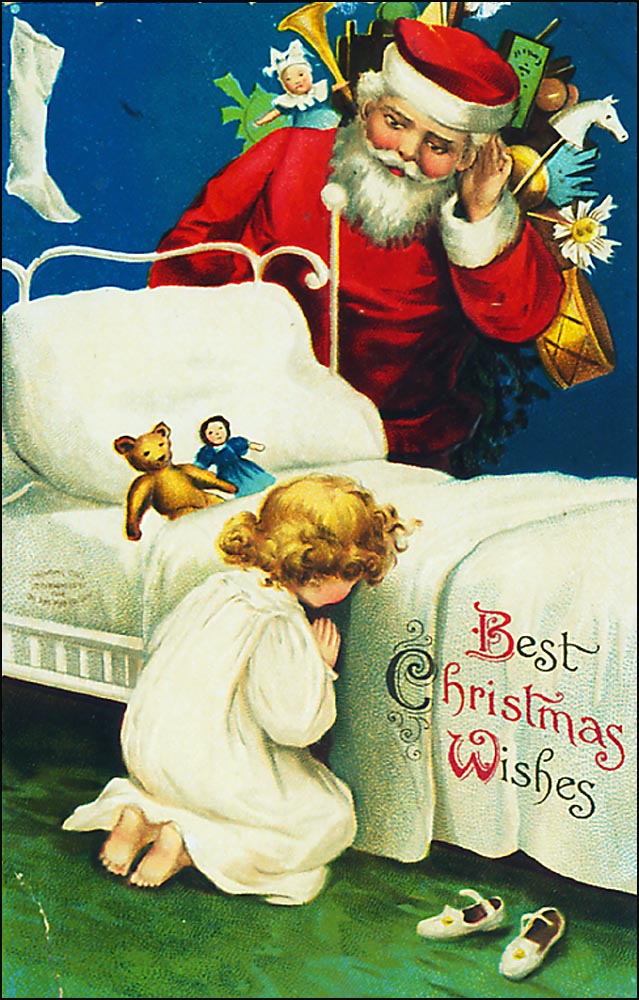 Saying her nighttime prayers, and whispering her deepest wishes, she knows Santa Claus is listening.

We remind our children that Santa can see and hear everything they do, and he might just leave a lump of coal in their stockings if they’re naughty or not nice. Why do we hang stockings at Christmas? Legend has it that former monk Sinter Klaus (later known as St. Nicholas) heard of a poor family’s plight and decided to help them. As he left gold near the chimney for them, the third gift fell into a stocking that was hanging near the chimney to dry. 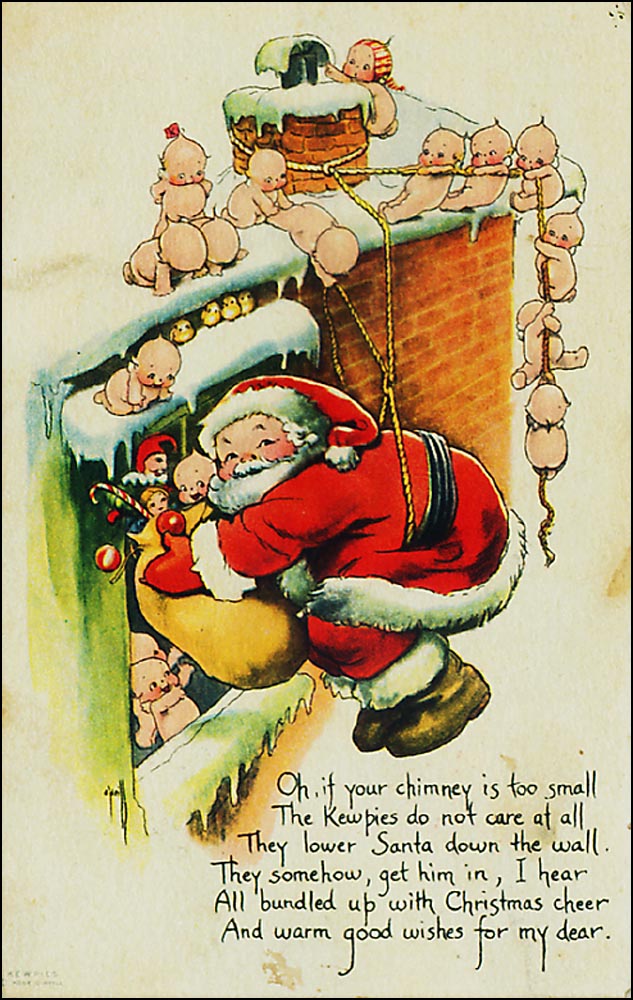 “Oh, if your chimney is too small the Kewpies do not care at all; they lower Santa down the wall.”

It’s the big night! Snow is glistening outside and we can hear the wind, but we’ve been warm and toasty tonight, sitting near the fireplace. The Christmas tree is brightly decorated with paper streamers, popcorn strings and carefully preserved glass ornaments. Our beautiful angel, wings behind her, watches over the house from its tippy top. All the presents are wrapped and sit snugly under the tree. A plate of cookies and a glass of milk sit out on the table to help Santa Claus keep his strength up when he stops at our house, as he flies around the world on this one magical night. The children are in bed, and a sleepy mother and father have followed suit. Not a creature is stirring, not even a mouse. And sure enough, Santa arrives!

The Kewpie, whose name comes from Cupid, was invented by Rose O’Neill, an American Midwestern artist. She always said that the idea for them came to her in a dream. Kewpies were first printed as comic characters in the “Ladies Home Journal” in December of 1909. Rose described them as “a sort of little round fairy whose one idea is to teach people to be merry and kind at the same time.” 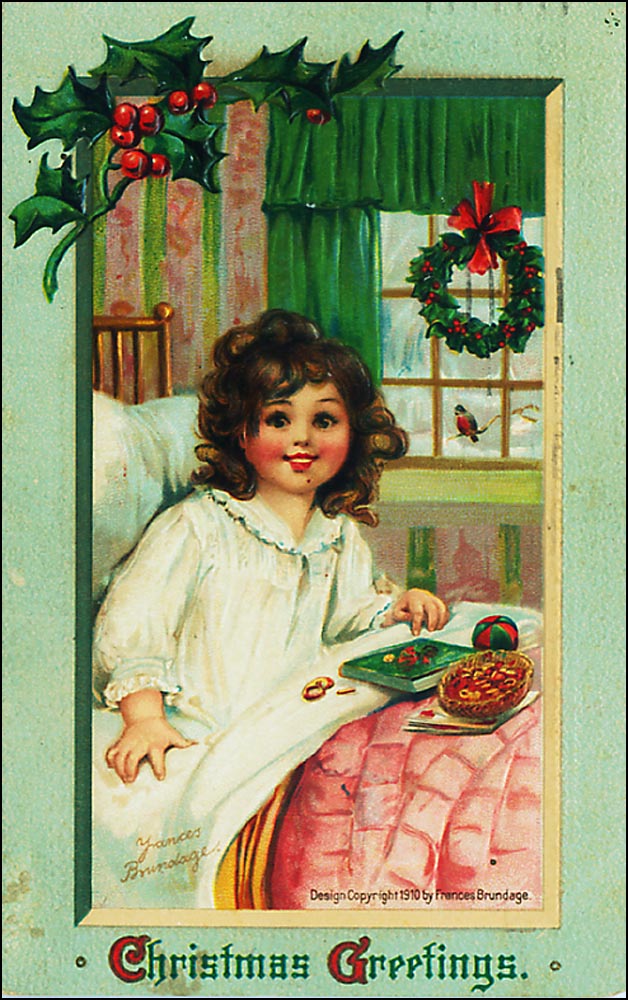 Nothing is more beautiful than a child’s face on Christmas morning, waking up in anticipation of bounding downstairs to see what Santa has left under the Christmas tree.

The long wait is over! Our children wake up early, excited to see what treasures await them under the tree.

As we shake our heads and move back into the present day, one thing hasn’t changed. One of the best parts of Christmas is the wondrous and happy face of a child. 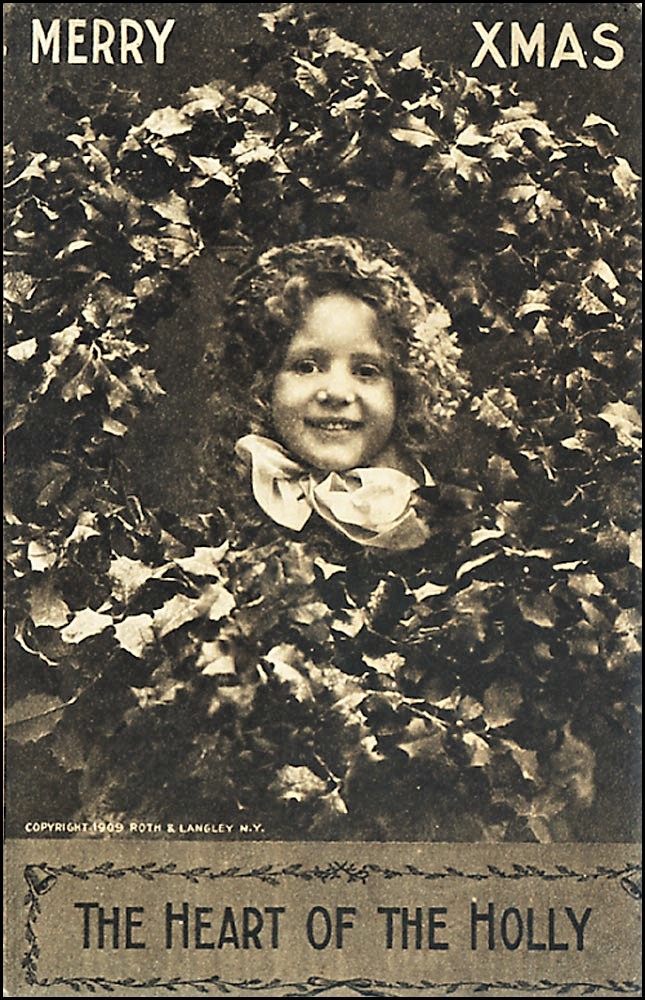 This 1909 postcard is not colorful and it is like many things that don’t cost a lot of money, its simple sentiment continues to ring true, from then until now: It’s the child who is truly the heart of the holly.

MERRY CHRISTMAS TO ALL. AND TO ALL, A GOOD NIGHT.

Bonnie Wilpon is the author of Postcard History of Sarasota and Bradenton, Florida and Postcard History of Hollywood, Florida (published by Arcadia Books) and is a postcard dealer and collector in Tampa, Florida. She is Membership Chair of the Sunshine Post Card Club and a Contributing Editor for Postcard History. Bonnie can be contacted at: bonnpon@att.net.
PrevPreviousThe Mansfield Bar – Mystery Solved? – Maybe!
NextGaston Noury, a French Artist with a Flare for the InternationalNext
2 Comments
Oldest
Newest Most Voted
Inline Feedbacks
View all comments
Helen Ciesla

Bonnie, I just want to thank you for sharing your research on Christmas Past as seen through postcards. Often, when attend postcard shows, I flip past all the vintage Christmas postcards. Now, I’ll take a closer look. Thanks for sharing a counterpoint to 2019 Christmas commercialism.

A useful reminder that “the way it used to be” is often actually “the way people idealize how it was”.