Some great detective work by Postcard History readers has solved (?) a mystery surrounding an unusual modern chrome postcard. The card’s title, “Lost My Head Don’t Loose Yours” was featured in the May 30, 2019, launch of this website. The card is shown here.

I speculated this could be a veiled reference to Jayne Mansfield‘s tragic death in 1967.  The car she and her entourage were traveling in late at night rode under the back of a slow moving large truck at high speed shearing off the car roof killing the three adults in the front seat – Mansfield was one of them. She was 34 years old. Rumors she was decapitated are not true. She died from a crushed skull according to a coroner’s report. 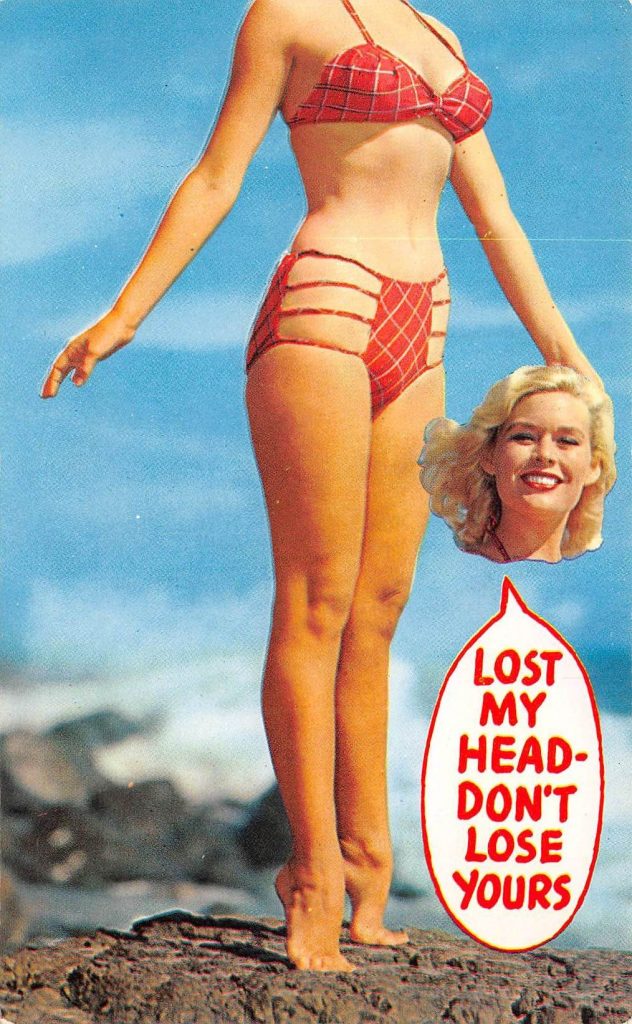 I wondered if the card was made in 1967 using the high profile accident as part of a lobbying effort to get the trucking industry to install a metal bar on the back of every trailer to prevent “under ride” accidents such as what happened in the Mansfield case. This safety bar has since been nicknamed the “Mansfield Bar.”  I was hoping for a used example with a dated cancel to turn up and it has! As it turns out I was wrong.

Readers David Dickinson and David Shedlock both correctly pointed out earlier that initial clues on the back of the card showed a two-digit postal code on back and not a five-digit zip code. That dates the card to pre-1964. Zip codes were introduced in 1963 and became mandatory in 1967. But the icing on the cake belongs to Peggy and Gary Spengler who picked up a used example of the card at an auction and the back is shown below. 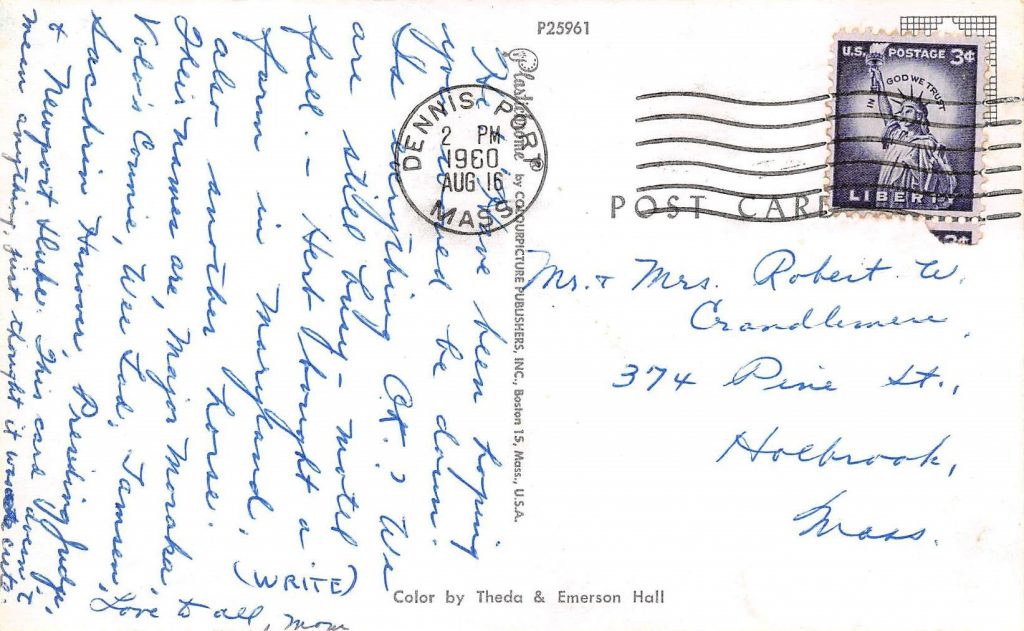 It is postmarked Dennis Port, Mass. Aug. 16, 1960, a full seven years before the accident. The back of this card differs from the one shown in the article indicating there was more than one printing by Colourpicture Publishers, Inc. under their Plastichrome logo.  The message on the postally used card is a personal one but at the end it says, “This card doesn’t mean anything, just thought it was cute.”

Another interesting sidelight is the used card has printed at bottom – color by Theda & Emerson Hall.  These two were a husband and wife team of photographers in the ‘40s and ‘50s noted for producing crisp vibrant color photographs at a time when the technique was difficult and rare. Their work was used by almost all the Hollywood film studios for photographing movie stars. Their work can be found on other postcards as well as Headline Comics, movie star related magazines, and works related to the human figure.

Now we know a bit more of the story! Is there more? Happy Hunting.

One example of how a postally used card can let you know “the rest of the story”, as radio personality Paul Harvey used to say.